The Fourth Crusade led to the sacking of Constantinople, instead of Egypt, by a combined army of French, Flemings, Lombards, Germans and Venetians. It took place in April 1204 and was a complete disaster. It leaders lost control as the army went on a rampage of raping and looting, bringing about one of the greatest artistic disasters of all time. This happened despite Pope Innocent III at Rome forbidding Crusaders in 1202 from committing atrocious acts against other Christians. The leaders were a triumvurate of Baldwin Count of Flanders, Boniface, Marquis of Montferrat in Lombardy and Doge Enrico Dandolo of Venice, who was supplying both men and ships. Although blind and aged 83 the Doge played both sides as he had already signed a lucrative trade agreement with Egypt and by urging the Crusaders to attack Constantinople, his greatest rival for trade in the Mediterranean, he could wipe out the competition and enjoy the spoils. Four horses made of copper and bronze and covered in gold, part of a monument that had stood outside the Hippodrome were removed to St Mark’s at Venice and placed above the main door where they stayed until the early 1980’s when they were replaced with replicas, the originals restored and displayed inside the basilica 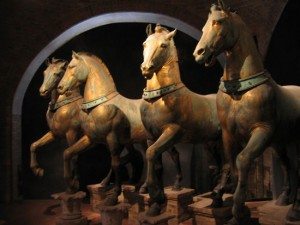