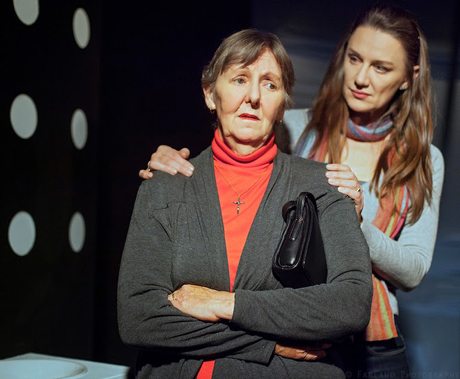 Tap Gallery is an artist-run collective for emerging artists and the venue for theatrical productions.

The flexible space on two levels provides theatre patrons with the opportunity to view artworks prior to the performing arts presentations. The Gallery and Theatre are located at Darlinghurst, a suburb on the fringe of the Sydney CBD.

After we followed tubed fairy lights down a cavernous passageway, a curtain was drawn to reveal an intimate theatre space. Crooner songs with gentle and warm tones played to produce a soft and mellow atmosphere.

The stage was small and the Set Designer, Tom Bannerman, strategically placed the car, table and chairs. He designed and built the car efficiently and ingenuously so that the back seat had a duel purpose. 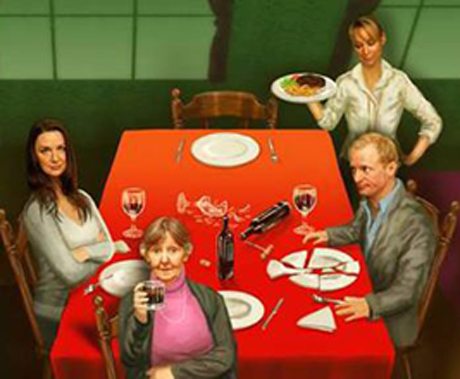 With a simple flick by the actors, it became the third seat at the luncheon table

Ellen [Amanda Stephens Lee] recently widowed and her brother Warren [Jeremy Waters] was in the car driving to collect their mother Peggy [Kim Hillas] from the family home. Pete Neville, the Sound Designer to suggest the illusion of a moving vehicle, subtly used the muted purring of the motor.

Peggy then sat in the front seat and was immediately suspicious because the presence of her son was totally unexpected. She had valued her weekly luncheons with her daughter as a respite from her on going role as carer of her bedridden husband.

Peggy also treasured the indulgent and touching way Barb [Briony Williams] the restaurant maitre d’ treated her on each visit. She was wary because Warren was a teacher and should have been at school. He assured her it was a pupil free day. She was not convinced and saw this as further evidence of a looming problem.

Conversation between the three characters was awkward and difficult. The audience along with Peggy sensed an undercurrent of menace. The rather nasty character of Warren began emerging as he triumphantly declared, “I hate that mock orange” his mother’s beloved shrub.

The characters were very uneasy and unsettled with each other and the tension built as Peggy suspected something was strongly amiss.

The stage had a revolving insert and with a flick of a switch the table at the restaurant moved around to centre stage. The sinister mood was created through dialogue that was uneasy and disquieting. The adult children were judgmental about the alcohol consumption of their parents and tried to prevent Peggy from enjoying her usual three rum and cokes at lunch.

Suspended pauses and silences created apprehension and built an ominous tone. The children continued ridiculing the way Peggy cared for their father and strongly suggested she was trying to murder him. In addition she was criticised for continuously feeding him watered down whisky and gin at all times of the day and night. 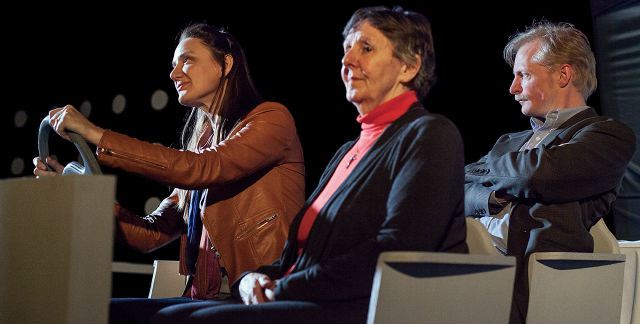 This information had been delivered to the siblings via the housekeeper who attended to some of the domestic duties. They believed the part time housekeeper before investigating her claims or giving their mother an opportunity to explain the circumstances and reasons for her actions. I felt saddened by the evidence that they did not trust their own mother and I wondered if trust was ever really present in their relationships.

The judgmental natures of Peggy’s children and their warped sense of loyalty exposed the audience to the beginnings of betrayal.

I felt compassion for the mother who was coerced into disclosing secrets of her marriage from the past.The children intruded upon a complex marriage that had lasted for fifty years.

Not only does Peggy have to deal with their surreptitious and carefully hatched plan of intervention, but blood in her urine was symptomatic of her own ill health.

The bathroom scenes were cleverly orchestrated by the use of a washbasin secured to the theatre wall and the dimming of stage lights to construct the semblance of another room on stage.

The tension built to a cruel and horrible climax. Peggy cries, “This isn’t a lunch it’s a lynch mob”. Throughout the performance Kim Hillas demonstrates an astute understanding of Peggy’s character.

She delivers her dialogue with compassion, wisdom and humour. She ultimately fashioned a character that I felt explored some of the issues of old age with integrity and honesty. 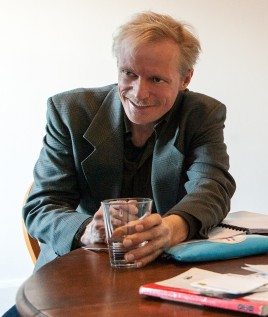 Jeremy Waters imbued his character Warren with a violent undertone and an ill kept temper. His performance was convincing and exacting.

Amanda Stephens Lee portrayal of Ellen delivered the complexities of the character’s fragility. Her role as a practicing psychologist appears to offer no consolation or support in her own personal life.

The Chicago playwright Joel Drake Johnson had meticulously crafted a potent script that explored issues that are relevant to all families and evoked empathy for the struggles of the older generation and the complexities of relationships.

Joel Drake Johnson is a highly acclaimed American playwright who has built a strong relationship with the Steppenwolf Theatre, Chicago. He has both past and future commissions with the Theatre.

Their “backgrounds and experiences in the United States and Australia have fused into a unique theatrical DNA, blending the strengths of both countries’ theatrical traditions to produce work with a big, beating bloody heart at its core”. This was the premiere of Four Places in Australia. It reflected the Outhouse Theatre Company’s mandate.

The American playwright was teamed admirably with the Australian production.

Four Places offered a compelling narrative of a family disintegrating under the pressures of mistrust and misunderstanding.