Europe and England adopted a new way of life by the end of the seventeenth century, one that would mean the ‘remorseless subjection of humanity to the clock’. Excavations at Herculaneum and Pompeii in Italy, which commenced by 1738 and 1748 respectively, fuelled a growing interest in the ancient world.

The ideas and philosophies, fashions and passions of each age are splendidly reflected in the design of decorative arts, notably French mantel clocks. A gilt bronze, enamel and marble clock in The Metropolitan Museum of Art New York has as a theme the Triumph of Love over time. The god of love is pointing his arrow to the minutes while holding a blazing torch to the celestial globe. Chronos, or father time is chilling out gloriously.

This stunning work of decorative art, an example of fine clockmaking is from the workshop of French craftsman Jean-Baptiste Lepaute (1727-1801), horologer du roi . The royal sculptor Augustin Pajou (1730-1809) provided the fabulous figures. The contrasts between the burnished and matt areas are wonderful examples of the skill and technique of the worker that fashioned the gilt bronze. The eighteenth century in Europe was an age of science and discovery, dazzling artistry and literary excellence, military milestones and political and social scandals. The age of light and elegance in the decorative arts and mind was lit by candlelight. Advances in mirror plate technology and its reflection encouraged the creation of lavish interiors and the use of gold, which refracted light beautifully.

This was a period when men and women deliberately set out to rediscover the virtues of ancient classical art and architecture. They studied the ancients and their achievements and were impressed with their appreciation of the natural forces that surrounded them.

Jean-André Lepaute (1720-1789) and Jean-Baptiste Lepaute (1727 – 1801) founded a dynasty of Parisian clockmakers, who all contributed significantly to French horlogerie.  Born 23 November 1720 – Jean André c1752 made a clock with one wheel, showing hours, minutes, seconds and striking hours and quarters. In 1753 he devised a pinwheel escapement for clocks, with pins on both sides of the wheel, which has since been widely used. 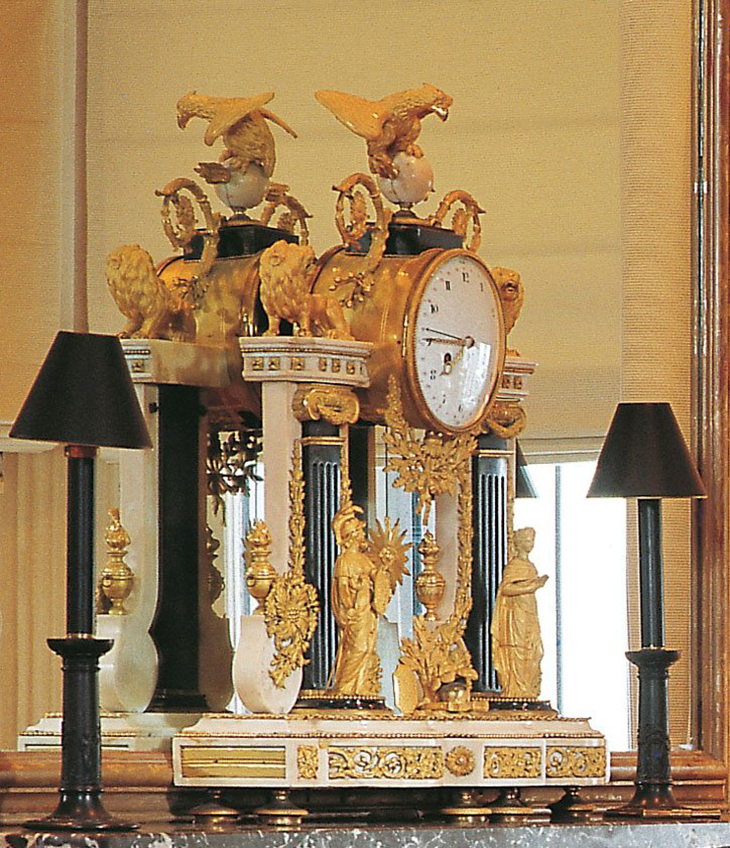 Pierre Robinet, Master Clockmaker 1776, Louis XVI, white marble with gilt bronze, with sculptures of strength and justice standing before two pilasters surmounted by two lions and an eagle perched on a globe above the dial, now in The David Roche Foundation House Museum and Gallery North Adelaide, South Australia

Gilded clocks were favoured at this time, gold was prized for its many virtues – mythical, religious and symbolic. Gold resists rust and decay and beautiful golden objects, have been unearthed around the world for centuries remaining virtually unscathed by the passage of time. It was the perfect material to embellish timepieces.

The identification with the worlds of ancient Greece and Rome had as much to do with the eighteenth centuries perception about early democracy, as it did with antique rules governing art and design and the concerns the ancients had with balancing human intervention on nature.

Discovering a photograph of a gilded neoclassical style French clock once owned by my family recently, prompted me to revisit this extraordinary era of splendid timepieces. French marble and gilded clock by Pierre Robinet, Paris, Louis XVI, standing on the mantel in the living room designed by Carolyn McDowall at Paddington in 1990.

They stood in front of a pair of classical Ionic pilasters surmounted by two lions, a symbol of courage, authority and wisdom.

A classical garland draped around its face symbolizes the passing seasons; flowers for spring, wheat for summer, grapes for autumn and holly for winter. An eagle perched on a globe above the dial has its wings spread wide.

Able to fly higher than any other bird an eagle was known for his strength and single-minded purpose. He would become perhaps the most important symbol of these innovative expansionist times.

In mythology the leader of the Greek Olympian Gods Zeus released two eagles one from the east (ascendant) and the other from the west (descendant). Where they met was the centre of earth, or navel of the world and many people at the time thought that was Paris. My image was re-discovered tucked away inside a book by Maurice Lengellé –Tardy, which had been published first in 1949 (page 107) with my 5th edition 1981.

Tardy interpreted the subjects clocks were decorated with as a way of helping other scholars concentrate on examining their construction.

Wide ranging and spanning a variety of countries and cultures from Africa to America, from Egypt to Europe Tardy vividly explained the use of decorative and often exotic ornament on clocks.

Tardy had a photograph of the only known example of a similar clock to ours in the second volume of his book, which noted it was in the collection of the Musée des Arts Decoratifs at Paris. The only difference we could find based on the illustration was the phases of the moon on its dial were not present on ours. 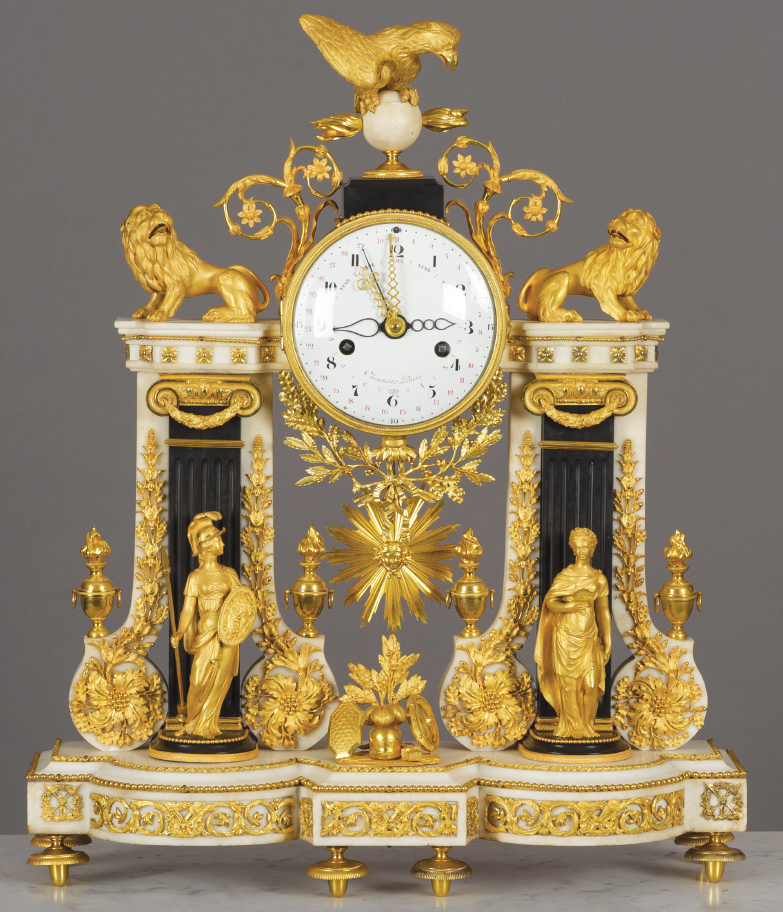 Pierre Robinet, Master Clockmaker 1776, Louis XVI, white marble with gilt bronze, with sculptures of strength and justice standing before two pilasters surmounted by two lions and an eagle perched on a globe above the dial, The David Roche Foundation House Museum and Gallery

The symbol of Medusa, the Gorgon’s head is featured on the end of the pendulum. She became a favoured decorative device towards the end of the French monarchy. Under the Directory and Empire periods in France Medusa represented political injustice. Interestingly, today it is in The David Roche Foundation Collection, North Adelaide, South Australia. The clock featured in the thriller film the Day of the Jackal made in 1973. When watching the movie years later, there it was sitting on the mantel behind the Jackal in a meeting room, which turned out to be the residence of the French Ministry of the Interior.

Innovative clocks were a result of a public passion for science and the mechanics of invention produced in fine furniture made by the Roentgen family of Germany. Cabinetmaker to Queen Marie-Antoinette (1755 – 1793) of France David Roentgen (1743-1807) in his workshop indulged in mechanical devices, a characteristic flair begun by his father. He made drawers and mirrors appear and disappear by pressing hidden releases. 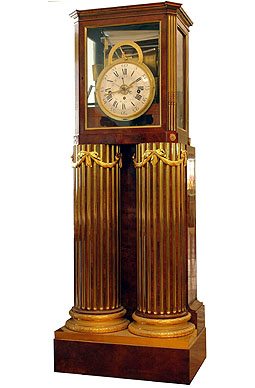 Peter Kinzing (1745-1816) invented many of the gadgets and provided the workshop with clockworks. Kinzing made pendulums from when he was ten years old. He was self trained and his musical movements especially delighted the royal family of France and he became horologer de la Reine, or clockmaker to the Queen.

A rare clock made of mahogany, ormolu, brass, enamel, glass and steel for Marie Antoinette c.1785 was restored by Jere Ryder with Arthur W.J.G. Ord-Hume in 1997, and ever since it has been a musical show-stopper on museum tours of the Nemours Mansion, former home of the late Alfred I. DuPont in Wilmington, Delaware U.S.A.

Another similar clock by Roentgen and Kinzing with all its gilding restored is in the Hermitage Museum, St Petersburg c1780. France’s talented craftsmen working during the reign of the Bourbon Kings reached a high point of excellence in manufacture.

This included the work of fondeurs-ciseleurs who worked in bronze, casting and chasing the magnificent mounts so characteristic of French furniture at the time.

They were aided by doreurs, who applied real gold to the bronze mounts made by fondeurs-ciseleurs and they both worked within the guild system, which had been reformed in 1776.

Manufacturing parts for clocks was just another aspect of their operation and there were numerous processes that could be employed, including Mercurial gilding, which historically was unsurpassed in terms of its aesthetics and quality. They did not know at the time it was dangerous.

A Marchand Mercier was a merchant in luxury goods and from the late 1750’s onward Daguerre monopolized the purchase of Sévres porcelain plaques and production of this type of furniture. King Louis XV’s last mistress Mme du Barry patronized Daguerre and he developed the practice of decorating furniture with porcelain plaques.

Louis XVI became owner of the Sèvres porcelain manufactory on his accession in 1774. It employed some 4000 people with a new speciality, the production of porcelain plaques. In a city of some 600,000 people this was a high percentage of workers in one place.

The French sculptor and most prominent of bronziers of the time was Pierre Philippe Thomire (1751-1843) who trained at the workshop of master metalworker Pierre Gouthière  (1732-1758), who supplied the Comte d’Artois, Marquis de Marigny brother of the King’s mistress Mme du Pompadour and the marchand-mercier Dominique Daguerre. Thomire also worked with Jean-Claude Thomas Duplessis (1730-1783), a bronze founder, designer and supplier of gilt-bronze mounts to Sèvres where his father, Jean-Claude Chambellan Duplessis had been Artistic Director (in charge of models) from the late 1740s – 1774.

When Duplessis died in 1783 Thomire supplied all the bronze mounts used on Sèvres porcelain and became an outstanding fondeur-doreur collaborating in the decoration of the coronation coach of Louis XVI in 1776, the year he started his own business.

The stunning clock of the Vestal virgins carrying the sacred fire they were doomed forever to keep alight, is in a Washington museum today. It ironically formerly passed time in the boudoir of Louis XVI’s consort Marie Antoinette.

Its subject reveals that when warned of the approach of their enemy the Gauls (c. 389), the women took the sacred fire and vessels from the temple and fled from Rome to Caere, a nearby city. Sadly Marie Antoinette didn’t realize how close to home its story was. To survive the revolution and reign of terror in France Thomire turned to manufacturing arms and ammunition during the rule of the Directors of France (1795 – 1799). Later he switched back to decorative bronze work under the Consulate of Napoleon Bonaparte (1799-1804), employing hundreds of men.

During the 1780’s for just a few years drops or jewels had begun appearing on Sèvres porcelain. It was made of coloured enamel fused over gold and silver foil to imitate precious stones such as rubies emeralds and pearls. This style of decoration is generally associated with Philippe Parpette (1736-1806), a flower painter and enameler who claimed to be its inventor.

Parpette is known to have worked on a number of important commissions, including jeweled cups and saucers with portraits of the French king and queen Louis XVI and Marie-Antoinette.  He is indeed very significant in the world of clocks because he worked as an enameler at Sèvres before joining the factory of Joseph Coteau, well known as an enameler of clock faces.

This was an exciting applied technique, although the resultant wares were extremely costly and delicate.

All the trades in France were regulated at the time under a guild system and collaborating with each other to produce amazing objects – their livelihoods depended on it.

Sèvres work practices and the style of the wares they produced would have an enormous influence on other related trades as the era progressed. With the advent of the Revolution in France the royal manufactory of Sèvres was proclaimed a national property so it would be saved from destruction.

The Ancien Regime had used its wares as symbols of prestige elevating its greatness, one that would not taken forward in time until the time of the new Republic and reign of Emperor Napoleon 1.