Coming to a Palace Cinema complex near you throughout Australia from March 3rd 2015 is an annual event many look forward to.

Seven films for the line-up have been selected by the now retired from ABC’s At the Movies presenters, who are still very active, Margaret Pomeranz and David Stratton.

They are this year’s Festival patrons.

Ambassador of France to Australia Christophe LeCourtier noted, “We have given them ‘carte blanche’ to choose their favourite films. I thank them wholeheartedly for joining us and their presence” he said.

This collaboration certainly further illustrates the strong cultural links between Australia and France especially in Victoria where French explorers first mapped the coast and named the state Terre Napoleon.

If you are suffering from Margaret and David withdrawal here’s your chance to keep up with them both and their favourite movies. Margaret’s picks include 3 Hearts by Benoît Jacquot, Far From Men by David Oelhoffen and The Last Hammer Blow by Alix Delaporte.

David has chosen Diplomacy by Volker Schlöndorff, The Blue Room by Mathieu Amalric, Tokyo Fiancée by Stefan Liberski and the 1937 classic Grand Illusion by Jean Renoir.

David said about Grand Illusion “ “The film is memorable because of Renoir’s approach to friendship and the loyalties forged by class, so that the aristocratic French prisoner played by Pierre Fresnay has more in common with the German camp commandant – a great performance from legendary director Erich von Stroheim – than with his fellow countrymen.” David said. The French have certainly proved for centuries now, they are very adept at creating the art of pleasure and this year’s line-up should prove no exception to the rule. This 26th such festival is sure to captivate with an intoxicating array of fine films to choose from.

Gemma Bovary will premiere the festival on opening nights, it’s a romantic comedy set in the glorious countryside of Normandy where the light on a late summer evening is particularly beguiling.

Based on the popular graphic novel by Posy Simmonds, Gemma Bovery is a satirical and cautionary tale of English expats in France, it’s about the dangers attached to stirring up passions that can never really be sated. Posy Simmond’s popular book Gemma Bovary was in its turn inspired by the debut novel of French literary realist Gustave Flaubert (1821-1880). His tale about the infamous Madame Bovary became notorious, especially after he was taken to trial, charged with obscenity by public prosecutors because of its scandalous subject – a French love affair.

Flaubert’s tale became a bestseller overnight because it also confirmed what everyone suspected, that real love could also easily turn to tragedy. It is a tale that transcends time.

Its influence has continued on, because it is about the art of literary realism at which Flaubert proved he excelled, as does it seems, with many French directors of film modernity. Summer (Les Nuits d’été) is named after a song cycle by the 19th century French composer Hector Berlioz and was directed by Mario Fanfani.

It was the winner of the Queer Lion Award at the Venice Film Festival 2014.

It is about a subject that always attracts some controversy and raises eyebrows – cross dressing.

Set in the 50’s when it would have been far more controversial, scandalous and confronting than today, it’s about a man who spends a lot of time in the country with another woman, his alter ego.

Everyone is deaf, except Paula, who aged 16 acts as an interpreter for her parents and younger brother, especially in the running of the family dairy farm. Her salt-of-the-earth father decides to run for mayor not noticing Paula’s attentions are elsewhere as she strives for some type of independence. Saint Laurent is also an exploration of the life but this time about a man in the high eschelons of fashionable society, the famous and flamboyant couturier Yves Saint Laurent (1936-2008).

This expose explores his relationships, neuroses, addictions and insecurities. It was France’s entry in the 2015 Academy Awards® and from all accounts, he’s a tortured artist.

YSL became famous and then infamous especially for the excess that followed his successes on the runway. They led to him being dissatisfied with the reality of his life, while endeavouring to find a clear line of the beauty for everyone else.

This is a common thread for creative people who passionately feel the need to serve others rather than face their own inadequacies, a bit like Holly Golightly facing her ‘mean reds’. 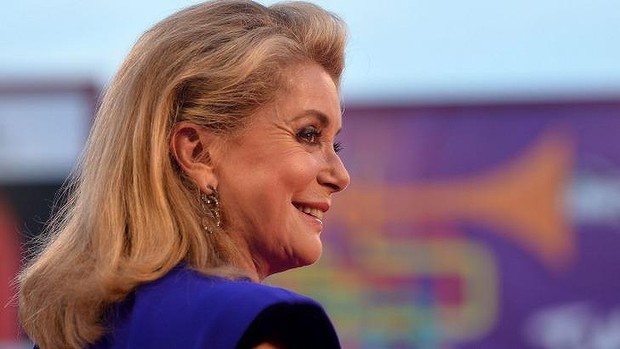 Longing and love is a theme that runs through many French movies and one of Margaret’s choices 3 Hearts (3 Coeurs), features the incomparable Catherine Deneuve as the mother of two sisters played by Charlotte Gainsbourg and Chiara Mastroianni.

They are both in love with the same man – so this is a somewhat sobering and painful romance about the capricious nature of fate. One of David’s choices is Diplomacy, which is set in France as the war to end all wars was drawing to a close. The allies have entered Paris and we become enmeshed in the tale of why the German military governor, who was preparing to dynamite the capitals most famous iconic monuments, bridges and yes that much loved tower, at the last moment changed his mind.

This is a tour de force of patriotism and passion, about duty, history and the story behind saving the ‘city of lights’.

Directed by Volker Schlöndorff and starring Niels Arestrup, André Dussolier, Burghart Klaussner, Robert Stadlober and Charlie Nelson, it is a film all about art, but not in the way you would normally think, but about the considerable skill attached to the art of negotiation

A modern French classic has been chosen by Margaret and David to wrap the festival up on closing night.

Paris, Je T’aime (2006) ensures audiences travel through the arrondissements of Paris observing integrated stories that tell a tale of city life. It consists of eighteen superb short films inspired by the subject of love, from acclaimed directors such as Olivier Assayas, Bruno Podalydès, Gus Van Sant and Ethan and Joel Cohen.

All in all this feast of French film has a great deal to offer this year so check out your choice, dates times and venues on the downloadable AF French Film Festival 2015 Program

Dressing The Queen: The Jubilee Wardrobe by Angela Kelly provides a first-hand account of the work of those directly responsible for The Queen’s wardrobe.