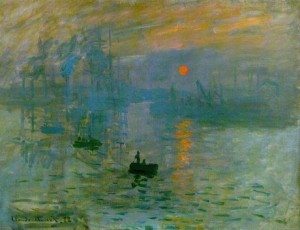 While passionate, unlike their posh artist predecessors the so-called French Impressionist painters (1874 – 1886), with a few exceptions, were mostly spectacularly poor. They wanted to provide an all-new view of life and not follow an old set of rules. They pulled away from the French Academy, whose focus was on the ancient past, to produce a new style of painting full of people within natural settings and without ‘artifice or grandeur’. They thought beyond the square, brilliantly capturing life indoors and outdoors where nature ruled in all her spectacular glory. They wanted society to become forward thinking. They provided subjects that were either dark or light, en grisaille or in full glorious rich sensuous colour. They recorded them at play, at the opera, the ballet or horse races, at home, in gardens, bedrooms and even from under their beds, whether undressing, dressing or, buck naked in their bath and much more. Many people found it difficult to cope with their new vision.

A very comfortable train ride ushers us into Madrid. On my travels 18 years ago I wasn’t so wild about Spains’ capital, so how would I feel about it now? Well many years have passed, circumstances have changed, so it’s with fresh eyes that I look at Madrid. What a…