Melbourne mystery fans and aficionados of Phryne Fisher, and her ‘fabulousness’ ALERT!

Apparently ‘the idea for a national award for short stories, written by Australian women and featuring a strong female protagonist, was cooked up over a few glasses of wine in 1994 at a convenors’ meeting in St Kilda, Victoria.  The purpose was to support and unearth new talent’.

Prior to the award presentations, Miss Fisher (Essie Davis) will discuss her ‘life in crime’, and hopefully her relationship with Jack (Nathan Page), when Sue Turnbull Professor in Media and Communications at the University of Wollongong, who is also a Sisters in Crime national co-convenor, and a crime columnist for the Sydney Morning Herald, interviews her.

Those who are attending can ‘Frock up for Phryne’ and a prize will be given for the best Phryne-inspired costume, as judged by Phryne herself, actor Essie Davis, Phryne’s author Kerry Greenwood and the show’s producer Fiona Eagger. This will be great bonus for the winner and sure to inspire all the Miss Fisher aficionados to come out in style. 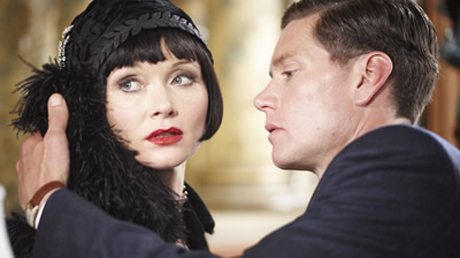 Phryne is a fashionable girl of her time sassy, sexy, with a fabulous ‘bob’, having cut off the long hair most women of her time wore forever. Socially complex, she certainly takes the wind completely out of Detective Inspector Jack Robinson’s sails.

Half the time he looks completely startled, especially when she’s being ‘steamy’. Nathan Page channels Jack with great panache as Phryne challenges his moral compass, adherence to social conventions and strict police rules about allowing the public to ‘meddle’ in police affairs.

In Series 2 he seems to have found his stride in dealing with the ‘dame’ who on every level, teases him unmercifully.

Jack’s feelings for this powerful mesmerizing celebrity sleuth sends him into turmoil as she dances around him, and attention on him, constantly challenging him to keep up with her own awesome powers of deduction.

Miss Fisher frock fanciers will also be please to know that due to such overwhelming demand the National Trust Victoria presentation Miss Fisher’s Costume Exhibition currently being held at their property Rippon Lea in Melbourne, showing off the ensembles she wears in the show, has been extended.

It will now run until Sunday December 1, 2013. Our Fashion Elixir Editor Jo Bayley visited the show recently and will pen her review soon.

The ABC series is surely one of the ABC’s fav shows and the second series just as the meticulously constructed world of series one, follows the independent, glamorous and unflappable leading ‘art deco’ lady detective as she takes on Melbourne crime. It is the city after all with a renowned ‘underbelly’.

Jack and Phryne’s able assistants on their journey are the young and talented ‘Constable Hugh Collins’ played so ably by Hugo Johnstone-Burt whose in love with Miss Fisher’s right hand companion and assistant Dorothy (Dot) Williams ala Ashleigh Cummings. Dot’s come out of her shell, but is distraught to discover that returning her feelings for Hugh might cause just a few more than one problem in the Fisher household, which she plays an integral role.

Miss Fisher has her own website these days because she is not only wealthy and fashionable, but also as ‘sharp as tack’, a woman who is not afraid to embrace change. She is also a lady who likes positive action From the graffiti covered laneways of the city to the hallowed halls of academia, or from the bright lights of the brothels to the high fashion world of haute couture, Phryne is a fantasy character many women would like to emulate.

She’s a free thinking woman wanting to be known for her modernity and modern ideas, seen to be as able as James Bond, but with her own stable of classy lovers. Art Deco (1906 – 1940) is phrase best used to cover the sumptuous and heavily decorated French design styles that started during the first decade of the 20th century, survived World War 1 intact and culminated in the 1925 Parisian “Exposition Internationale des Arts Decoratifs et Industriels Modernes”, of which “art deco” is a 1960’s contraction.

It changed its focus during the thirties and perished in the flames of World War II. Art Deco became the decorative style of the Paris Salons between 1920 and 1925, and the style manifested itself emotionally with zest, colour and playfulness.

Its purpose was that of luxury and leisure. Wealthy, fashionable art-lovers enjoyed, just like Phryne does, living in a luxurious environment that enhanced their carefully chosen couture clothes,.

Author Kerry Greenwood, who created the girl from ‘Richmond’, Victoria is a character herself.

She has made Phryne more than just ‘skin deep’. She says “The only thing I share with Phryne apart from gender is extreme stubbornness. I am personally a lot like Dot. Though I do love speed and have, for example, jumped out of a plane with parachute (though I never walked on the wings), flown a Tiger Moth, fired a pistol, etc” says Kerry. Davis is on record as saying: “Phryne is this magnificent, witty, vibrant, crazy, reckless kind of super hero who is a great champion for women’s rights and people in less fortunate situations. She really looks after women, but she loves men… she’s a lover and a fighter.” This year there are 175 stories competing to win the Sisters in Crime Scarlet Stiletto Awards, which offer a record $7000 in prize money plus the coveted trophy for the overall winner.