In the Importance of Being Earnest, a trivial comedy for serious people one of Irish poet and writer Oscar Wilde’s protagonists says ‘After playing Chopin, I feel as if I had been weeping over sins that I had never committed, and mourning over tragedies that were not my own” In 2001 the Polish Parliament founded the The Fryderyk Chopin Institute to conserve and protect the musical heritage of its most famous composer, pianist and music teacher, who was one of the great masters of European Romantic music of all time.

He has played in the first round and made it into the second. Watch Jayson play at Warsaw Valse op34 No 1 and Berceuse op57 in D Flat Major.

Held every five years competitors are required to play a selection of various Chopin works. The victor will pocket a gold medal and 30,000 euros (40,900 dollars) and win engagements at the New York Philharmonic and Tokyo’s NHK Symphony Orchestra.

Gillham’s former teacher, Leah Horwitz was head of keyboard at the Queensland Conservatorium for 14 years. She said about Jayson when he left Australia for London he is a “very precocious musical talent but personally unassuming and laidback . . . audiences love him. He’s an entertainer. He’s got the looks, the technique, the intelligence and determination”

She also said “The best thing for him was to send him away” Australia is still just too small in classical music terms for him to pursue a piano career here. “I don’t know what is going to happen, but he is the whole package.”

Jayson Gillham is the only Australian to have been a London Piano Competition finalist, in 2005.  And he came third aged 18.

In September 2008 he won the Australian National Piano Award at Shepperton in Victoria.  Other awards include prizes in the 2008 and 2009 Royal Over-Seas League Music Competition, and first prize in the 2007 Beethoven Piano Society of Europe’s Intercollegiate Piano Competition. He has performed with The Queensland Orchestra, Sydney Sinfonia, Sinfonia Australis, and the West Australian Symphony Orchestra. 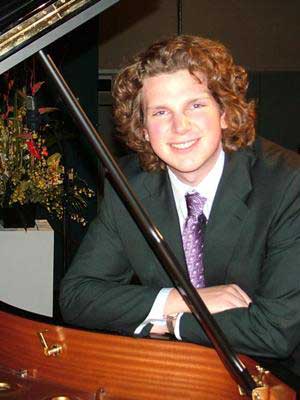 In 2008 he competed in one of Europe’s most prestigious piano competitions, the Prix d’Amadeo at Aachen, Germany. “I just hopped on the train from London, and went over and played. It was my first time in continental Europe.” said Jayson. After progressing through each round “I woke my family up with a call at 3am”. His mother, Yvonne, asked how it had gone. “I did alright,” Gillham said in such a low-key way, she assumed he had lost. “I won,” he added quietly.

Jayson Gillham graduated with the Queensland Conservatorium Medal and the Griffith University Medal for academic excellence, before moving to London in 2007 to complete his two-year Master of Arts in Performance at the Royal Academy of Music. Several scholarships made his overseas studies possible. In addition to piano playing these days he can also be found teaching music to young people in the Kings Cross area of London.

We wish Jayson good luck in what will be one of the most challenging exercises of his youthful career. The experience of playing against the best in Europe, the home of classical music, will no doubt be of immense benefit to this young man who plays Chopin so brilliantly and is seriously in pursuit of a musical life.

May he always find perfect harmony.

Marriage a sacred rite in most religions of the world brings grace to those partaking; does it still mean something when the fancy clothes worn are stored away?