Opened on 2 March, 2017, the latest exhibition at Magnet Galleries in Melbourne is GAIA, the 7th annual women photographers’ exhibition in honour of International Women’s Day. As the title suggests, this year’s theme is Gaia. In ancient Greek mythology, Gaia is the primal life-force goddess, the personification of the Earth and ancestral mother of all life. Nineteen photographers were invited to contribute to this theme, and their responses are eye-opening, thought-provoking, and gorgeous. 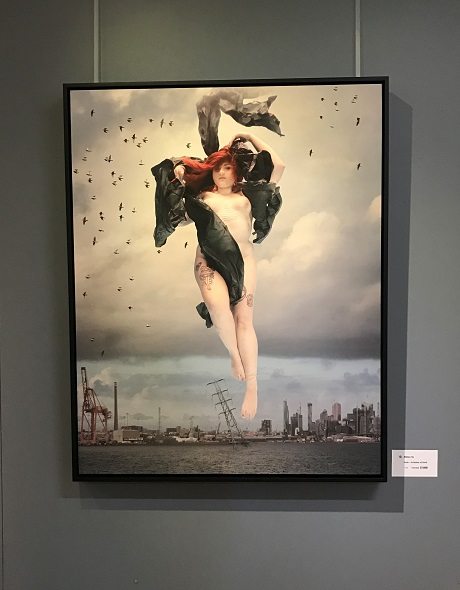 Presented in four galleries, this homage to Mother Earth is the perfect theme to highlight International Women’s Day (IWD), which is celebrated on 8 March each year. IWD initially took place in 1909, as a Socialist political event in New York City, and by 1911 was confirmed an official day in 17 countries, and celebrated by more than 1 million people in countries including Austria, Germany and Switzerland. The fight for suffrage, for women’s right to vote was a major element during its first years. IWD was adopted as a public holiday in Russia in 1917, and was then celebrated in largely socialist and communist countries until 1977, when the UN declared 8 March to be a UN Day for women’s rights and world peace. A celebration of Gaia is surely a very fitting tribute to International Women’s Day.

Upon arrival at Magnet Galleries, on Level 2 of 640 Bourke Street, visitors are met in Gallery 1 by a striking work by Marisa Ho, ‘Gaia – Goddess of Earth’. A digitally generated collage shows the radiant Goddess, draped in swathes of material and resplendent in tattoos, hovering above the dark foreboding city. Surrounding the Goddess are a number of works dealing with nature as theme. Jill Frawley has two photographs on display, from her After the Fire series. Rebirth and Out of the Ashes illustrate beautifully the aftermath of a bushfire, as new life bursts forth after being ravaged by the flames.

Also in Gallery 1 is a truly exquisite work by Sandra Kontos. A fragment of Iris, Greek Goddess of the rainbow and messenger for the Gods, reclines in statue form, visually arresting, both beautiful and thought-provoking.

Gallery 2 holds images by the inimitable Joyce Evans, one of the great photographers of Melbourne, and indeed Australia.

Inspired by Max Dupain, she has chosen to show a selection of works taken at that most Australian and iconic of all our beaches, Bondi, and has charmingly captured the shared joy of the outdoors and the freedom of the beach. Gallery 2 also contains two wonderful pieces by Wendy Currie, black and white photographs of fern fronds. These are printed utilising the Van Dyck process, a nineteenth century printing process invented in 1842 by Sir John Herschel, an English mathematician and astronomer, which results in a great tonal range and unique characteristics in each print. The third gallery hosts yet more interpretations of the theme, including work by Jenny Hodge. Her series Terra Firma 1 – 5, shows some of the beautiful patterns created by nature, of water and of wind in the sand and stone.

They invite further investigation, to question what we are looking at, and why these features have appeared. A personal favourite in the show is the work of Carmel Riordan- the Saeva Suburbia series, in Gallery 4. Translated from the Latin as ‘Wild suburbia’, this is a very pleasing sequence of photographs, taken of scenes one would not usually consider photogenic. A decrepit caravan in an unkempt yard, or overgrown ivy threatening to engulf a small cottage, the work serves to highlight changes within suburbs, once thriving and filled with trimmed front yards and young families, but now with vacant driveways and fence-high weeds. They are lovely photographs, at once heartbreaking and beautiful.

There is an abundant amount of work on display, each one a different interpretation of GAIA as Mother Earth, who gives life and sustains us. The exhibition invites visitors to reflect upon our obligations to nurture and to maintain our earthly home. The exhibition was officially opened on 2 March by Helen Scott, an active member of Landcare Australia, a grassroots movement dedicated to managing environmental issues in local communities across Australia. Introduced by Susanne Silver, photographer and owner of Magnet Galleries, Ms Scott spoke eloquently on Gaia, and the range of different theories surrounding the concept. She mentioned James Lovelock’s book ‘The Revenge of Gaia: Why the Earth is Fighting Back – and How We Can Still Save Humanity’, and his changeable views on the environment. She spoke of Rachel Carson, and her seminal 1962 book ‘Silent Spring’, which kick-started environmental activism.

She also highlighted the work of people such as Brian Cox and David Attenborough, for bringing nature and the environment to our attention by utilising images. This led her to speak of how photography can so often be the catalyst for change, and encouraged the audience to #beboldforchange – the very timely and appropriate slogan for this year’s International Women’s Day. The photographs in this exhibition emphasise the importance of Mother Earth, her fragility but also her strength. And of the need to take care of her, so she in turn continues to take care of us.

Each of the works are on sale, and visitors are invited to make a donation to UN Women, the development branch of the United Nations for women in third world countries.

Nationally on Tuesday August 19 people with children in their care are invited to observe The Reading Hour 6 – 7pm, when they undertake to read aloud to a child