In the context of Japanese gardens a rock covered with moss and lichen, a weather-beaten concrete path, a gnarled old tree trunk or exposed roots by a garden path can evoke a deep sense of emotion.

It is also the aim of a Japanese garden to highlight the rhythm of nature during the changing of the seasons.

Although in Australia our latitude except for in a few southern states, is not one where seasons are as clearly and sharply defined as in the Northern Hemisphere, there is still, as in all climatic zones, the need to observe that change.

It reassures us of nature’s power and cyclic beat, evidenced when following the winter season tender buds on trees and bulbs burst forth with spring promise.

A garden that stirs the imagination has precious vitality. This effect requires that everything be revealed in complete view from every vantage point. The spectator is left to imagine what lies behind a hedge, or a turn of the path, which is masked by an artful arrangement of shrubs and rocks.

We can examine the depths of a woodland glade, dark and shady in some parts and light and sunny in others.

In quite another way the imagination may be stirred through the perception of materials in the garden formed into abstract designs or, on a small scale, made to symbolize the grand features of the natural landscape.

You do not have to be a lover of Japanese culture to grasp some strong validity in its garden art forms. From the standpoint of pure design it is logical and honest. But, more than that, its bonds are stronger and its roots deeper than any we have known before in the realm of garden art.

There are ties of an ineffable spirituality, which can be felt at all levels of perception.

This forms what may be the real attraction of Japanese gardens, however subliminal, to the western mind.

Since then the trees have passed through one generation of planting. Conscious and keen observation, as well as an appreciation of wild nature, inspires the creator of a Japanese garden.

In executing a design the raw forms of nature are all symbolized, suggested and implied. Garden makers objectively attempt to humanize the natural landscape.

They do not try to force it into a straight jacket but aim with artistry and discrimination, to select out of nature those elements they deem the most perfect and pertinent to a composition. This is what saying that a Japanese garden is subjective in spirit means.

The light filters through to the ground providing partial shade, the perfect condition for the moss that now holds sway.

The hand of man, although ever so lightly applied, is still at the controls.

This is a point we need consider carefully when viewing Japanese garden art.

It is not simply mimicking natural forms but it is ever so astutely contriving to appear natural, or creative in a very small scale or space, using both wonderful forms and shapes that occur in the natural landscape. In Japan Zen Buddhism used garden art as an aid to disciplined contemplation. Design at its most severe excluded almost all plant material. The most famous example of a dry landscape is at Ryoan-ji in Kyoto. The temple verandah looks onto a rectangle of raked quartz on which lie groups of rocks.

The materials used in a Japanese garden are meant to bring the timelessness and solidity of the world of nature into the garden. Lasting elements such as rock, gravel, sand, and evergreen trees and shrubs are dominant, while fleeting blossoms and colour play a role of being the counterpoint. Formality and uniformity of design was considered fatal to the freshness of the imagination.

Landscapes, birds and flowers became the favourite subject for depiction, rather than the human figure.

The latter was only ever present in the person of the beholder himself.

Under the Shogun Ashikaga Yoshimasa (1435 – 1490) during the Tokugawa period, an elaborate aesthetic ritual associated with tea drinking was established. This was later codified by the tea masters of the sixteenth century. The Silver Pavilion in the Snow

The Toguda, or East Seeking Pavilion at GinKaku-ji was adapted for the tea ceremony during the seventeenth century and some of its architectural details subsequently became standard features not only of the tea-hut, but also of the Japanese home.

This most celebrated of buildings name means Silver Pavilion.

It was constructed on the site of an earlier paradise garden. Surviving all through the periods of Japan’s turbulent history only to be burnt down in 1950, the pavilion originally stood in the water, the surrounding lake accentuated by rocks and trees.

Human civilization down through the ages has evolved into ever more intricate and complex urban patterns in which steel, glass and concrete have come to play a predominate role.

Though it seems obvious that at least one foot is irretrievably stuck in the hard city pavement, the other remains just as solidly planted in the moist, soft earth of the countryside.

We will never really give up loving nature, or wanting some quiet beneficent refuge to escape to when the ‘world is too much for us to bear’ and so we have made gardens.

A garden offers us security. It is as if a kind power instilled in a garden has come around us to preserve us.

We do not respond to all manifestations of nature with such indiscriminate trust and open arms. From the very beginning we have made the distinction between nature in the raw and the humanized landscape.

In the midst of untamed wildernesses of forests, mountains, plains, swamps, deserts, tundra or jungle we are struck with awe by the power and majesty of nature expressed in great stretches of uncultivated terrain untouched by humans. 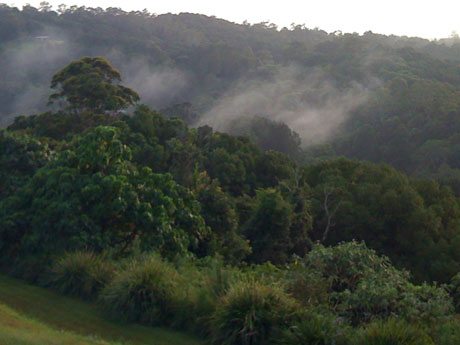 It is in drawing the distinction between nature in the raw and the humanized landscape, which Japanese gardens have sought to express.

Through the centuries of their development they have reached a high level of success.

We love the effect of spaciousness and vista. Looking across long unrestricted distances, we gain a feeling of freedom. As we gaze at a far horizon our imagination can take flight. However we also like our privacy.

If our garden is located in a sparsely populated area such as desert, mountain, seashore or as in our case, the Australian bush, we may be able to combine both vista and privacy.

A home perched on a hilltop or mountain gains complete privacy as well as a mountain or distant sea view, like in a misty scene in the Wilson Creek Valley in northern New South Wales. In confined city environments space and vista may not as easily be acquired.

Therefore we need to create them in our garden design. If we gain one, we often lose the other. Anyone with a garden in an urban, or semi urban area, where houses are relatively close together, who also insists on freedom to enjoy their house and garden as they please, will require some kind of enclosure.

Fences may limit our view but they do substitute for it a sense of personal freedom. This is certainly a desirable effect that becomes necessary as we live more and more in our outside room of tranquility by cutting out distracting outside noises and sights.

Finally, it defines the limits of a garden, just as a frame sets off a painting enhancing its beauty.

A sense of age and antiquity or timelessness is another garden effect valued in the Japanese way of things. Many of us treasure the aesthetic of age. We seek out a house designed in an earlier period as it offer us a feeling of continuity, which in turn, nurtures our well-being.

Tempting though literal interpretations are, they diminish the power of Zen gardens. Humanized naturalism is one of the intrinsic characteristics of Japanese Gardens, because the exercise is humanizing natural forms. It subjects them to the human perspective and scale. A partnership with nature requires that man and nature is on very familiar terms.

The Japanese garden artist developed his powers of observation so that in his minds eye he would be able to see a rich repertoire of shapes and forms that could be utilized into his garden design.

This thoroughly academic approach deliberately intends to instruct the eye, the mind and the spirit in order that they may gain reverence and respect for the great creative energy that pervades nature.

Tell people you are off to Bali and it insights two reactions. The first being “bogans, braids and bombings”. The second, “sophisticated shopping, fabulous food and friendly folk”. I fall into the second category. I must admit, before my first trip to this tropical paradise, my thoughts were firmly in…