Human civilization has evolved intricate and complex urban patterns in which steel, glass and concrete play the predominate role.

While it seems obvious that at least one foot is irretrievably stuck in the hard city pavement, the other remains just as solidly planted in the moist, soft earth.

We will never really give up on loving nature, or wanting some quiet beneficent refuge to escape to when the ‘world is too much for us to bear’ and so we have made gardens. A garden offers a place of solitude and security.

It is as if a kind power instilled in a garden has come around us to protect and preserve us. We do not however respond to all manifestations of nature with such indiscriminate trust and open arms. From the very beginning we have made the distinction between nature in the raw and the humanized landscape.

In the midst of untamed wildernesses of forests, mountains, plains, swamps, deserts, tundra or jungle we are struck with awe by the power and majesty of nature expressed in great stretches of uncultivated terrain untouched by man.

‘Better a pearl with a flaw than a pebble without. Everything has beauty, but not everyone sees it’*

It is in drawing a distinction between nature and man-made, that Japanese gardens have sought to express.

Through the centuries of their development they have reached a high level of both success and sophistication.

A passion for nature and man’s harmony with it has instilled itself into the garden culture for over a thousand years in Japan. Japanese garden art challenges the onlooker to intellectualize their own ideas.

It is all about coming to terms with what ultimately it is that we are all seeking and what it is we wish to project into the design of our own gardens.

A sense of age and antiquity or timelessness is a garden effect valued in the Japanese way of things. Many treasure the aesthetic of age. We seek out a house designed in an earlier period because it can offer us a feeling of continuity, which in turn, nurtures our well-being.

In the context of Japanese gardens a rock covered with moss and lichen, a weather-beaten concrete path, a gnarled old tree trunk or the exposed roots of a tree by a garden path can evoke that same deep sense of emotion.

It is also the aim of a Japanese garden to highlight the rhythm of nature in the changing of the seasons. Although our latitude in Australia is not one, in many of our regions, where the seasons are as clearly and sharply defined there is still, as in all climatic zones, the need to observe that change.

It’s intrinsic to the human DNA. It reassures us of nature’s power and cyclic beat, evidenced when following the winter season tender buds on trees and bulbs burst forth with spring promise. A garden that stirs the imagination has precious vitality. This effect requires that everything be revealed in complete view from every vantage point. The spectator is left to imagine what lies behind a hedge, or a turn of the path, which is masked by an artful arrangement of shrubs and rocks. We can examine the depths of a woodland glade, dark and shady in some parts and light and sunny in others. In quite another way the imagination may be stirred through the perception of materials in the garden formed into abstract designs or, on a small scale, made to symbolize the grand features of the natural landscape.

The garden artist observes water as it cut it’s way through a slope, crashes against great boulders or, cascades down rocky slopes to form small and then great waterfalls. Its noisy pathway is heightened by a sense of the sound it makes until it eventually became a stream, a great river or, empties into a lake or pond.

The artist observes the way the surface has remained undisturbed for great periods of time until a gentle breeze comes along to play upon its surface delicately so that it ripples and glistens with movement. Water is an essential element in a Japanese garden and it is always present whether actual, or suggested.

Rocks are the mass. Their forms are carefully placed within a Japanese garden to accentuate and express to the onlooker a natural phenomenon. The designer of a Japanese garden also used logic and common sense, following the laws of nature, when he expresses an idea or mood. Large rocks with perpendicular sides and slopes represent a high mountain, while smaller rocks and stones dispersed carefully into the lawn or surrounding shrubbery express the slope of a low and familiar hill.

Although Christianity was prescribed during the three hundred years of the Tokugawa Shogunate, many Japanese, whom the Portuguese and Spanish Jesuit priests had converted, were forced to practice their religion secretly, resorting to camouflage to fool authorities.

Oribe stone lanterns set in the gardens of crypto-Christians differed in design from other styles of stone lanterns and, in their essential spirit. A bas-relief carved into the base, though disguised as a Buddhist image, was in reality meant to be the Virgin Mary.

The Shakkei, or borrowed landscape, was the main feature of the garden of the Shugaku-in Imperial Villa and the work of the Emperor Gomitsunoó c1655. In such a garden external views form an integral part of the design.

In China these ‘borrowed views’ also included buildings, trees or natural scenes outside either a garden or courtyard within a garden adopted into the composition to become part of the view. Contemporary Japanese domestic gardens are tiny and a luxury in such a heavily populated country. However traditional values are embraced with the restrained use of materials and textures.

The ultimate expression for a love of nature for many Japanese was the additional practice of a garden art form now known as Bonsai. It was a skill, technique and art form passed down from father to son, carried on by the sons of those who devoted their lives to it.

Documentary evidence dates its earliest beginnings from the latter part of the Heian dynasty in the eleventh century. It was further developed during the Tokugawa period, when the third Shogun Iyemitsu took a great interest in what is a unique, refined and noble art that takes living trees and successfully miniaturises them. 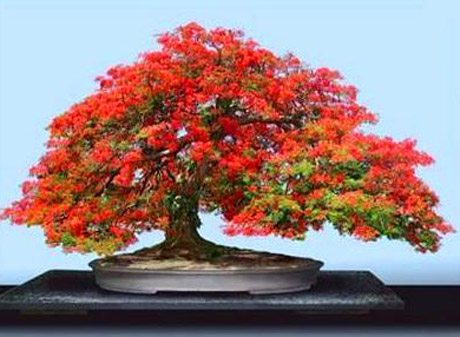 Constant pruning and shaping, as well as the expenditure of time and patience create these ‘Lilliputs’ of nature, as they have been described.

They sit very well with Zen and Taoism philosophies as they require discipline and devotion to the task.

Every branch, every twig, and every leaf is individually watched and nursed tenderly. Just as an artist paints, so the real bonsai creator must be able to produce a perfect specimen from the sharp, clear and unfaltering imagination of the designer.

There is a great absence of historical data concerning this extraordinary art form, however thousands of trees throughout Japan that are hundreds of years old bear silent witness and are genuine evidence of its success.

It was given the name ‘Bonsai” during the Meiji era, in 1869. And, became instantly recognized nationally as a work of art giving it a competitive position with other known objects of beauty and desire. A real miniature garden enthusiast believes you should talk to the trees, nourish the soil, and play with the rocks for at least an hour each day while enjoying a selfish moment of solace, peace and joy.

An extension to the unique art form of Bonsai is Saikei, the fad of creating a miniature garden.

Sakei is when several species of plants are grouped together in order to maintain an overall image of scenic beauty.  They need to be harmoniously merged to create a pastoral symphony, a song of love from the heart of nature itself.

Whether it is Bonsai or a Sakei garden, each for its designer offer unlimited potential in using up creative energy. It is an art form that can be practiced by anyone, man, woman or child, but only if they earnestly seek to express their love of nature and an inherent need to stay close to it.

All around the world, in contemporary times, the garden art of Japan has inspired the creation of amazing outdoor spaces where the sunlight filters through a variety of plant patterns onto reflective pools shimmering in the sun. 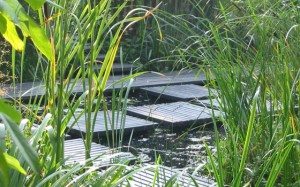 In some cases stepping platforms of different shapes and sizes have replaced stepping stones, so that moving over the water and through nature becomes, and remains, an integral part of the garden experience.

The most important anchoring element still though is that all important emphasis on line and mass. This became a major influence on western designers and artists in many disciplines late in the nineteenth and early twentieth century.

The twentieth century designs of Dutch landscape architect Mien Ruys (1904-1999) have almost achieved legendary status. They combined clarity of concept with richness of detail, particularly in the planting. The objective was to bring about a profound happiness that can never be surpassed by an accumulation of wealth and power. The garden art of Japan devotee can approach his or her ultimate destiny calmly and with great dignity, glorying in the beauty and majesty of the creation and creator. True beauty will only be discovered by one who mentally completes the incomplete.