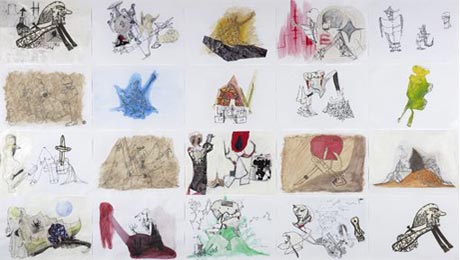 ‘Made in Wadeye’ is the name of Gareth Sansom’s suite of twenty drawings that has won him the 2012 Dobell Prize for Drawing at the Art Gallery of NSW, where they will now also reside permanently as part of the collection. Completed in ink, lead pencil, graphite, coloured watercolour pencil, felt tipped pen, ball point pen, egg tempera, earth and collage, they were made during a visit to a remote Aboriginal settlement nearby to Darwin.

“I am attracted to the freshness of the work, its clarity and its light playfulness, and the unpredictability of the succession of images, and delicacy of the rapport between them” said Aida Tomescu, the judge for this year’s Dobell Prize for Drawing, which was also its last year in its present form.

The Dobell Prize for Drawing has always been the subject of discussion and debate about the nature of drawing, one of the most important disciplines of the Old Masters. What constitutes a drawing in contemporary times is deliberately not outlined and is left for competing artists to define by their practice and for each individual judge, annually appointed by the trustees of the foundation, to determine in the process of looking at all the entries.

This flexible, open-minded approach has ensured the greatest variety of drawings is submitted each year. However in 2014 the prize will be re-released with a renewed and refreshed approach to the exhibition of contemporary Australian drawing at the Art Gallery of NSW under a new initiative – the Dobell Australian Drawing Biennial. 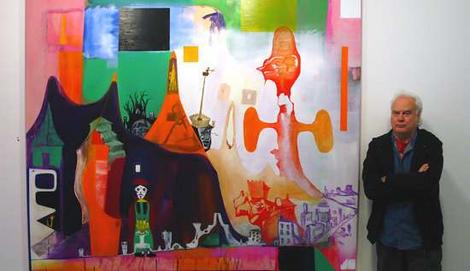 Gareth Sansom has been a pre-eminent figure in the world of art in Australia now for over half a century. He was awarded $30,000. Born in Melbourne, Gareth Sansom, 73, studied art at RMIT between 1959 and 1964.

He came to prominence in the 1960s as a radical convention-breaking painter, with influences ranging from Picasso and Jean Dubuffet to Francis Bacon and British pop art. He was Head of Painting, then Dean of the School of Art, at the Victorian College of the Arts between 1977 and 1991.

Sansom has exhibited widely, represented Australia at the Seventh Triennale, India in 1991 and won numerous awards, including the National Works on Paper Award in 2006 and John McCaughey Memorial Prize in 2008. His watercolours, collages and paintings are based on a personal iconography that includes imagery of a sexual, satirical and philosophical nature. A highly regarded painter born in Melbourne in 1939, Sansom came to prominence as one of that city’s most promising and provocative young artists. He has revelled in using different media, including photography in his work.

His very fine work ‘The Great Democracy’ is now in the collection of the National Gallery of Australia and it encapsulates many of his artistic and aesthetic strategies and concerns. He has been inspired by the images of other artists including another controversial artist Francis Bacon, and similarly many of his works are ‘statements’ of the vulnerability of human existence.