It took centuries for gem cutting techniques to be refined and evolve. The first documented reference to a faceted stone appears in the ninth century referring to a stone worn in the gold cap of the Doge of Venice Pietro Tradonico. His headpiece was said to have contained a large sparkling ruby and diamond with eight facets as well as 23 cut emeralds.

The girandole or chandelier design for earrings emerged in the second half of the 18th century and continued into the 19th century and a small number in closed settings – where the backs of the stones are not visible, survive. Between 1820 and 1830 a large number of garnet necklaces were also produced with matching bracelets, brooches and earrings. 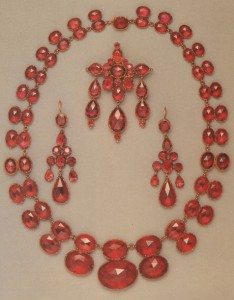 This extraordinary suite of garnets dates from the latter years of 18th century. The stones are rose cut, a style of cutting that left a flat base and usually two horizontal rows of facets rising to a point.

These garnets are in closed settings, with foil backing to enhance the colour and they are set in gold. Toward the end of the 1800’s the introduction of a man-made abrasive, silicon carbide would bring about a revolution in gem cutting technology.

However I must say j’adore garnets, and indeed diamonds in these early closed eighteenth style settings, they really can both be a girl’s best friend.