For those who haven’t caught up with NBC’s great geek, the larger than life loveable Chuck Bartowski (Zachary Levi) a Nerd Herder (fixes your computer problems) based in an electrical superstore, the Buy More (now also a CIA secret base), then you are missing a treat.

Chuck, played with endearing and enduring charm by Zach Levi, has a neural supercomputer called the Intersect subliminally embedded into his brain. It enables him in times of danger to become an expert at just about anything at all really, including turning into a grown up version of the Karate Kid to defeat America’s enemies.

In the first season episodes Chuck’s childhood friend Bryce Larkin (Matt Bomer from White Collar) has him thrown out of college trying to save him from becoming a recruit for the CIA, because he has such a big heart Bryce couldn’t bear to see it broken. But fate once in play has many twists and turns, and the CIA ends up catching up with Chuck all too soon.

Chuck has a most amazing group of people lending him support. His sister Ellie (Sarah Lancaster) and her handsome husband with the awesome abbs Devon “Captain Awesome” Woodcomb (Ryan McPartlin). They are both doctors, who save a likeable, and quite loveable villain Generalissimo Goya leader of a ‘latin’ country Costa Grava, who is delightfully played by French born Armande Assante (stunning as Napoleon when he was young and hot).

Then there is his best friend, Morgan Grimes (Joshua Gomez) who initially Chuck tries to protect and keep out of harm’s way but in the end joins him in his adventurous exploits.

Chuck meets a truly ‘hot babe’ – CIA agent, the lovely Sarah Walker (Australian actress Yvonne Strahovski) who together with her CIA agent partner Colonel John Casey (Adam Baldwin – another of those talented Baldwin boys) end up recruiting Chuck to fight for CIA causes. Yvonne landed the role within three days of arriving in L.A. to try to establish an acting career. Interviewed at the time she said her family were surprised and excited for her. 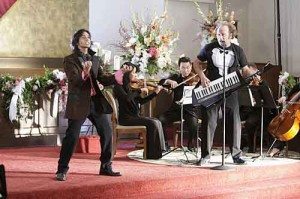 Jeffster, music for Ellie to get married Initially it has had many bad luck stories surrounding its ability to achieve high ranking domestic results in the all important ‘ratings’ on a Monday night.

However Chuck’s expanding world wide fan base actively campaigned for its continuance and have succeeded in having it renewed for season 2, 3 and now 4.

Chuck has its own Facebook page with nearly 2,000,000 followers, which is still growing. So hopefully it is raking in the gold for Chuck’s clever creators Josh Schwartz and Chris Fedak.

The stellar supporting cast for this show includes Scott Bakula as his dad Steve and this season his mum Mary turns up played by the Terminator lady herself, Linda Hamilton.

However none are more eccentric though than the two Buy More nerdy employees Lester (Vik Sahay) and Jeff (Scott Krinsky) whose band Jeffster has now become a regular act at Comic Con annually. In 2010 the presentation was all about a Bad Romance.

The music by Cake for Chuck certainly adds to its atmosphere…Chuck continues to prove that in 2010 geeks really rule!

Celebrating the art of design and craftsmanship in any age the Masterpiece Fair 25 June – 1 July 2015 at London, offers a diverse range of dazzling master works