Mayor of the City of Greater Geelong, Darryn Lyon (2013-), leading the charge for the retention of local colour and character while bringing the city online for the 21st century

The long hot summer promised by Victoria’s weather forecasters failure to make an appearance is, I guess, a disappointment for families and those of us who like to spend summer holidays by the coast…

… swimming, surfing and enjoying the warmth of the sun.

There are lots to see and do though in the current mild weather.

A trip down the M1 to the City of Geelong (50 minutes drive from Melbourne’s CBD or approx. 1 hour train trip from Southern Cross Station) is a great way to spend a summer’s day.

The gateway to the Bellarine Peninsula and Victoria’s iconic Great Ocean Road, Geelong, the City by the Bay, is located on the shores of Corio Bay and the Barwon River.

If you are driving from Melbourne’s CBD as you near Geelong Town Centre take the left Scenic Route option and travel along by Rippleside Park.

Lapped by the waters of the bay, there is plenty of space to park and picnic. 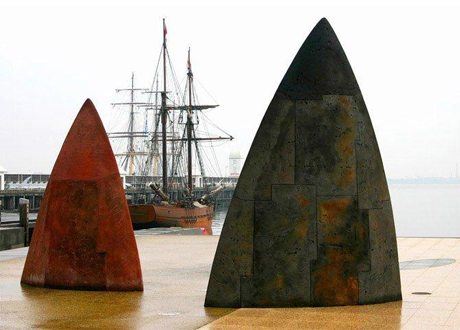 It’s an easy walk along the water’s edge past moored yachts, public artworks, landscaped gardens, children’s playgrounds to Cunningham Pier (a 10-15 minute walk from Geelong Railway Station) where ice-cream parlours and eateries of every persuasion are dotted along the wide expanse of foreshore lawn and Eastern Beach Esplanade.

If it’s a family outing then the kids will want to try the Carousel situated near the pier inside a custom built glass pavilion.

Magnificently restored, the wooden Armitage-Herschell Carousel was made in New York in 1892.

It has 36 horses and 2 hand crafted chariots – a ride is a delightful experience for big and little kids.

Wander a bit further along the waterfront and get a bird’s eye view of the bay and Geelong City via a ride on the Giant Sky Wheel.

The largest travelling Ferris Wheel in the Southern Hemisphere taking a turn on its slowly revolving wheel is not for the faint hearted.

Personally, I would rather have a more productive time than sitting in one of the Sky Wheel’s safe enclosed compartments. However friends, who aren’t members of the W-for-wimp-brigade, have told me it’s a magical ride… akin to ballooning over the crystal clear waters of the bay. At eight dollars a time it’s also very moderately priced.

Geelong is famous for its bollards painted by local artist Jan Mitchell they provide many a photo opportunity.

No visitor to Geelong’s waterfront precinct misses the chance to stand and smile at the whimsical carved wooden figures.

They stretch from Rippleside to Limeburners Point and up the hill into the Botanical Gardens.

A unique feature of Geelong’s public areas there are over 100 bollards stretching along the waterfront made out of huge wooden pylons.

Many were recovered from the historic Yarra Street Pier which was destroyed by fire in the 1980’s and later removed. The wood was first sculptured and then painstakingly hand painted to depict many of the events and history of the Geelong region, beginning with the indigenous Wautharong People up to modern times.

Many of the bollards are painted as historic people, including  former Premier Jeff Kennett and former Prime Minister of Australia John Howard. They were both in office when the bollards were being designed and installed.

Favourites include explorer Mathew Flinders overlooking the bay he discovered in 1802, the historic Geelong Footballer who ois near the old Hi-Lite Park site and the sailor and floozy near Cunningham Pier.

Other tributes to historic moments in Geelong’s history include the Speed Trials bollards in Ritchie Boulevard. Then there are the 1920’s lady swimmers on the sandy foreshore nearby and various sea captains and the rustic fisherman at Fisherman’s Pier. Keep walking along the foreshore path and you will come to the public baths. If the sun makes an appearance take a dip in the art deco-style pool (children’s pool separate from adults) or relax in the promenade complex at the restored pavilion.

There is a small ‘choo-choo’ train which for a small fee takes visitors along the foreshore and up the hill to the Geelong Botanical Gardens.

Only if your ham-strings are up to it, you can scale the steps behind the pool pavilion and follow the signs to the front entrance of Geelong’s glorious Botanical Gardens.

Established over a century and a half ago the Botanical Gardens has a fascinating history and recognised heritage value.

Designed in 1851, the exposed site of 200 acres with bay frontage and little vegetation has been transformed during the past 150+ years to become Eastern Park and Geelong Botanical Gardens.

The gardens are included on the Register of the National Estate because they are an excellent example of nineteenth century Victorian Botanic Gardens. The new entrance celebrated the gardens 150th year and features drought tolerant plantings and huge steel artworks – amazing. Landscaped with many native plants, some rare cactus and very unique bottle trees from Queensland this new section has received accolades from all over the world.

Behind the arid garden lies a more traditional garden with magnificent plantings and lush lawns and therein lies peace and soul inspiring solitude removed from the buzz of waterfront traffic and holidaymakers.

Some of the treasured plants include the Ginko Biloba which is regarded the finest in Australia. This tree from an ancient family was planted in the gardens in 1859 is the last species of the Ginkoacea still living.

It is starting to show signs of aerial roots, and who knows, perhaps like some Ginkoacea trees to be found in Asia it will live to be over 3000 years old.

There’s a cafe in the gardens which serves good coffee and great food – definitely a place to timeout before you walk back down the hill to the main drag, Moorabool Street and the Wool Museum and Visitor Information Centre. Head inside for info on exploring the city’s 100 National Trust listed buildings, antique markets and specialty shops and don’t forget to explore the region’s history by a visit to the National Wool Museum (located in the information centre).

After you’ve learned about the rich heritage that makes Geelong a fascinating place to visit walk up Moorabool to Little Malop Street to spend time in the Geelong Art Gallery. Since its establishment in 1896 the Gallery has amassed a magnificent collection of 19th and 20th century Australian and European paintings and decorative arts. These include 18th and 19th century English porcelain, British art pottery, colonial Australian silver, as well as contemporary Australian paintings, prints, sculpture and ceramics.

A particular focus of the collection is early images of the Geelong region.

The Gallery’s outstanding collection includes many works of national significance such as Eugène von Guérard’s View of Geelong (1856) and Frederick McCubbin’s A bush burial (1890). The interior of the building is fabulous; with highly polished floorboards it promotes a feeling of serene beauty as you wander its cream coloured exhibition spaces. I am always entranced by the Galleries ceramic collection – quite wonderful.

I’ve barely touched on everything Geelong has to offer – a shopaholic’s paradise with world class dining, galleries, stunning beaches and friendly people think I’m going have to tell you more about the City by the Bay in my next report.

Meanwhile, where ever you live on Planet Earth be happy and healthy.