Youthful Self Portrait with a view to the future painted c1747-1748 by Joshua Reynolds - courtesy National Portrait Gallery, London

March is looking set to be a marvellous month in Australia for those who love British Art. Just on 100 works of art will travel from the Royal Academy of Arts at London to regional Victoria, to go on exhibition at the Bendigo Art Gallery from 2nd March to 9th June 2014.

This is an extraordinary coup for the gallery, because the show was conceived and initiated by Bendigo Art Gallery Director Karen Quinlan. Showcasing and touring works in Australia is also a first for the Royal Academy in its 245 history.

The exhibition will include works by English eighteenth century ‘enlightenment’ painter Sir Joshua Reynolds (1723-1792), who was not the first favourite of the court during his lifetime. Nevertheless Reynolds became the very first President of the newly founded Royal Academy of Arts when it was established by George III in 1768.

The collection that is coming will include not only a Reynolds or two, but also revered works by other artists whose names are very well-known; J.M. W. Turner, Thomas Gainsborough, John Constable, John Singer Sargent, Henry Fuseli, John Everett Millais and the great modern favourite, John William Waterhouse.’

How many of us have a clear view of the future? 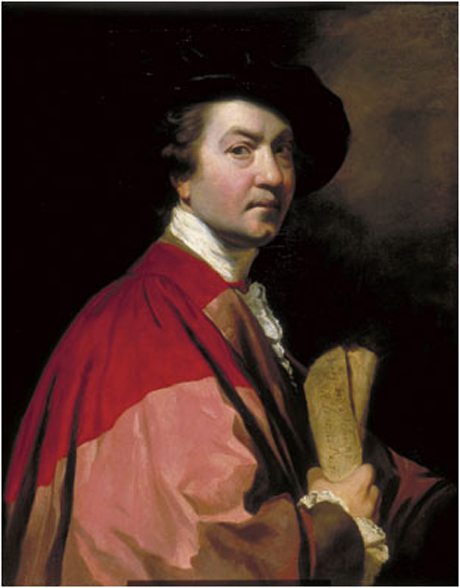 Sir Joshua Reynolds (1723-1792) believed that he did. Without doubt he was London’s most fashionable artist in his day, embracing his role with great alacrity. Most of his artist contemporaries believed he was the most outstanding painter of their day.

His paintings were considered in the ‘grand style, unmannered and full of human values’ and his ideas, ambitions and philosophies were all about securing the future of art.

The thirty-four original founding members of the Royal Academy of Arts determined to achieve professional standing for British art and architecture.

They also wanted to provide a venue for exhibitions that would be open to the public and establish a school of art, through which skills and knowledge could be passed to future generations of practitioners.

During the eighteenth century Reynolds recognised that if painters were to be treated as more than mere artisans or servants, it was less vital they change their practices (although this was important) than develop a justification to make their artistic endeavours acceptable to connoisseurs and patrons.

His ideal painter was a master of theory, as well as practice. A painter he believed must be able to ‘stand in need of more knowledge than is to be picked up of his pallet’.

Reynolds wanted to extend the view of the observer to bring about a refinement of taste. He infused all of his own works of art, particularly his portraiture, with an unprecedented sophistication, learnedness and dignity.

He gave close attention to his portrait of George Kein Hayward Coussmaker, who was a lieutenant and captain in the first regiment of Foot Guards.

It is recorded that between February 9 and April 16, 1782 he had no fewer than twenty-one appointments, and at least two more for the sitter’s horse.

The composition is very complex and the whole vigorously painted and many of his pictures that proved popular worldwide in his own time are still popular in our world today.

The Royal Academy of Arts was founded at a time when intelligent men were busy making the modern world. It was an age of enquiry and a time when the Royal Society also became renowned for supporting men of science.

Those with any pretensions to being one of the ton (highly fashionable) however lived for the fun and good times had in a London social season.

For them London was far more than a place of streets and houses, derelict districts and aristocratic quarters and the fine arts.

Its uniqueness for many being was that it was both a focus of aspiration and inspiration. 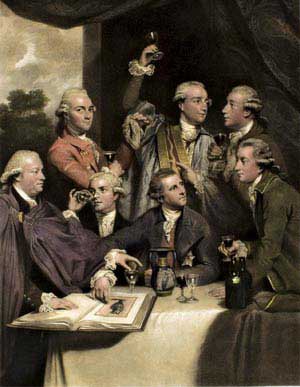 Society of Diletannti painted by Joshua Reynolds as one of a pair between 1777 - 1779. It was a drinking club for men who had completed their Grand Tour. This is the first and shows the collector Sir William Hamilton surrounded by seven of his fellow Dilettanti, pointing to an engraving of a Greek vase from his collection in the volume that lies open on the table in the foreground - courtesy Society of Diletannti

The elegant era now known as Georgian (c1714-1830)was dominated by the arrival of classicism in its fullness, expressed visibly in architecture and the design and layout of villas.

The idea of the villa, a much smaller and more compact type of house in which privacy, convenience and elegance were to be more important than parade and magnificence became very fashionable.

To a rural and agricultural society, such as the English were, barren and unproductive land was bad land so it also became important to fully develop land not yet under cultivation.

You also needed to manage it carefully in order to provide the money now needed, in more than ordinary quantity, to develop the settings that would suit ‘man’s new ideals and status.

These ideas were challenged and debated amongst members of the Kit Cat Club whose name derived from that of Christopher Cat their cook.

This select coterie of dilettanti, many of who were the wealthiest landowners of the day, assembled regularly at “The Fountain” in the Strand to dine.

They would exchange views and propose suitable “toasts” to both exalted beauties and life.

A Dilettanti at that time was different from our understanding of the word now, someone who simply delighted in the arts. 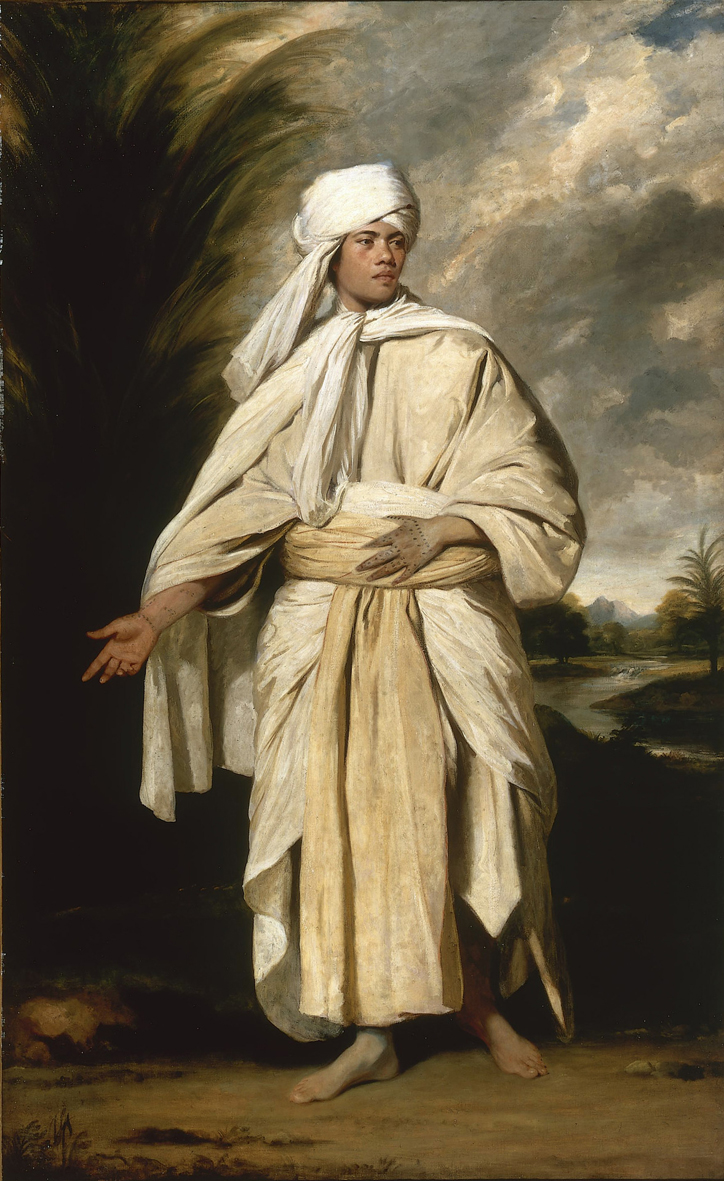 From 1769 through to his retirement in 1790 each year at the Royal Academy’s prize giving Reynolds delivered his Discourses, a group of 15 lectures with which he attempted to establish the credentials for British Art, for that of being as important as a corpus of paintings.

In many ways some of his ideas and thoughts still speak to the concerns of students of painting today. He had a ‘practical wisdom’.

His portrait of Mai (c.1751-1780) generally known as Omai, is considered one of the finest portraits painted by Reynolds. It perhaps epitomizes, more than any other painting he completed, the vision of the eighteenth century.

Sir Joshua was given the opportunity to paint Omai because he was such a celebrated artist, and he kept the picture at his London gallery.

The work, featured the Polynesian boy brought to Britain in 1774 at a time of great voyages of exploration and discovery in Australasia. The discovery of Tahiti and Omai’s arrival in England was a direct result of scientific and economic advances which led to Captain James Cook’s famous three voyages.

Omai’s depiction by Reynolds, owes much to French Enlightenment philosopher Jean-Jacques Rousseau’s idea of the Noble Savage. First shown at the Royal Academy of Arts in 1776 when The Morning Post declared it a “strong likeness and finely painted”, Sir Horace Walpole, often a stern critic, judged it “very good”.

After Joshua Reynold’s death it was bought by a patron and close friend Frederick, the 5th Earl of Carlisle and installed at Castle Howard in Yorkshire until 2001 when it came up for auction.

Today it remains in private hands, the owner refusing to sell it to the Tate who had raised philanthropic funds to purchase it. 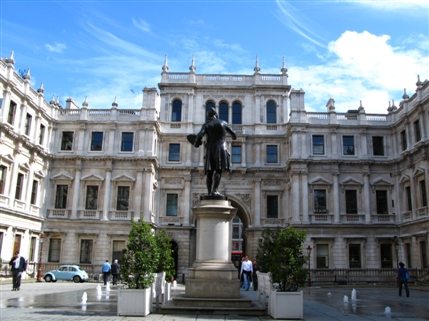 The Royal Academy of Arts, based at Burlington House in central London's Piccadilly

Reynolds defined the hierarchy of artists and pointed out what aesthetic values they needed to embrace, laying down the path he thought painters should follower if they were to become artistic inheritors of the Renaissance.

When he died the homage offered by polite society; at the funeral before his interment in St. Paul’s Cathedral, forty-two mourning coaches attended the cortege, followed by nearly fifty carriages filled with nobility and gentry.

The Royal Academy of Arts was considered the primary art institution and the leading venue for the study and display of art in Great Britain and Europe until at least the beginning of the 20th century.

Ambitious Australian artists sought the singular honour of exhibiting at the Royal Academy, which was considered paramount for those bringing culture to the colonies and developing reputation and renown. They were educated in Australia, then exhibited and subsequently gained their reputation through their exposure to and at the Royal Academy in London. Their works, drawn from across the collections in our State art galleries, will sit side by side with the English masterpieces that inspired them.

The Art Gallery at Bendigo, formerly known as Sandhurst, was originally founded in 1887 – Queen Victoria’s Golden Jubilee Year. They completed an extensive building and renovation program in the first few years of the 21st century to bring it into the contemporary age.

Since its early days, the citizens of Bendigo supported its growth as they expanded their own wide appreciation of artistic culture. It quickly grew from a “city of tents” to become a substantial city with great public buildings, enjoying a wonderful level of wealth and prosperity.

Philanthropists abounded and by the 21st July 1871 when it was declared a ‘city’ it boasted beautiful streets filled with architectural gems, all created by one of the world’s greatest gold rushes

Sited on a creek, whose name Bendigo was widely believed to derive from an employee of the sheep run handy with his fists who was nicknamed “Bendigo” after England’s Nottingham prize-fighter William ‘Bendigo’ Thompson

It was renamed Sandhurst during the early 1850’s, however this name was never liked and a poll in 1891 saw it revert back to Bendigo.

Today Bendigo is the fourth largest inland city in Australia and the fourth most populous city in the State of Victoria and its citizens continue its fine tradition of connoisseurship and artistic enquiry.

Detail of painting by Charles West Cope (1811-1890), 'The Council of the Royal Academy selecting Pictures for the Exhibition, shown in 1876, © Royal Academy of Arts, London Photograph by John Hammond

This is an exhibition they, and people all around Australia, will be very likely to embrace. Reynolds would have been most likely to have approved because in his Discourses he stated ‘ there is “genius” in the power of expressing the subject as a whole, so that the general effect and power of the whole impresses the mind, before the subordinate parts….’

‘… the purpose of studying masters is to understand the great principles which the work embodies. Consider the works only as a means of teaching one the art of seeing nature. The great business of study is to “form a mind,” adapted to and adequate to all occasions’. The exhibition is curated by Maryanne Stevens and Helen Valentine, with Nick Savage and Annette Wickham, from the Royal Academy of Arts and Karen Quinlan and Tansy Curtin from Bendigo Art Gallery.

It has been organised by Bendigo Art Gallery and the Royal Academy of Arts, London.

Is it possible to fall in love all over again? Can a city bewitch with her charms over and over? And can new joys be discovered after many years away? Well, if we are talking Paris, then the answers are yes, yes and yes! Sometimes we can be surprised by…