Georg Jensen (1866 – 1935) was an artisan many will know by name because of the retail stores that bear it today. His vintage pieces sell well world-wide today because he surely created some of the most attractive silver objects and jewellery during the age of Modernism.

Georg Jensen’s wonderful designs of the early 1900’s, like this necklace dating from 1904, always seem current and contemporary, not part of any passing fad, fashion or fancy, entirely a classic, with a life of its own and manufacturing standards of renowned excellence.

Jensen’s life was all about combining beauty with craftsmanship and his enormous vision, despite the struggle, won out in the end so that he and his designs have remained forever young. Georg Jensen was born in 1866 at Raadvad north of Copenhagen in Denmark, which is known for its production of high-quality knife blades. His father was employed in the trade. It is understandable then that an eye and appreciation for precision craftsmanship would be a great influence on the young Georg’s life and his subsequent journey in design and style.

Until his teenage years Georg experienced the normality of a boy who had come from a modest background. His schooling was aimed mainly at producing apprentices for the local foundry, not inspired and very promising young silversmiths as he soon proved to be.

His imaginative nature allowed him to appreciate the beauty of the natural world around him, and as slowly he began to investigate this emerging artistic side of his character, his talent for invention and innovation slowly emerged.

The relocation of his family to Copenhagen, plus his parents’ recognition that Georg possessed a very special talent worth exploring, led to his father ensuring that he was apprenticed to a goldsmith.

His remarkable ability with his hands also meant that he earned his qualifications within four years, which at the time was a significant achievement. This would enable him to pursue evening classes in drawing and figure modeling, whilst continuing to earn his living by day as a goldsmith. It was in 1887 that Georg Jensen finally achieved his long-held dream. He was accepted into a sculpture class at the Royal Danish Academy of Fine Arts. Here he could at last begin to express himself in a medium that he admired and was entirely passionate about.

He enjoyed success in his efforts and was rewarded by receiving a scholarship to go to Paris where he was able to further his studies.

During his student years, Jensen produced gold and silver work to support his growing family after he was married in 1891. When he was employed as a modeler for the Bing & Groendahl Porcelain manufacturers, he suffered considerable financial short-falls.

The death of his first wife, subsequent re-marriage and new commitments made the hazardous income he received as a sculptor untenable. This forced him to reluctantly leave his job, and first love sculpture, returning to working in the field of gold and silver permanently.

During this early phase of his burgeoning career, Georg Jensen’s most characteristic, individual and often repeated motif was a tulip-like blossom, or pod form with seed-like trails of silver balls, a characteristic of the northern European jugendstil (young style), one that is still popular today.

In 1904, when he was already close to 40 years of age Jensen opened a workshop at Copenhagen, producing a range of jewellery as well as other small items.

His entire stock at that time was displayed in one tiny showcase that each day he took outside and hung on the wall of the shop, taking it in at the close of each working day. By 1908, the workshop had moved and was enlarged to a staff of nine.

However it was still not financially secure, despite increasing interest following an exhibition of his jewellery at the Danish Museum of Decorative Arts, and major purchases by the Danish Government.

His family’s urgent financial needs became even more pressing as Jensen had married for a third time and there were now more children on the way.

Georg Jensen lived during an age when dining was considered a sacred ritual for any family to share and to renew its bonds. He believed that beautiful flatware would enhance people’s lives and make their dining experience much more pleasurable. Subsequently he designed his pieces for the home to be functional as well as aesthetically pleasing.

Sales of Jensen’s unique silver jewellery, which was often set with inexpensive but really lovely amber pieces, greenstone, moonstone or opals, was given the boost it needed by interests outside of Denmark.

Carl Dyhr a visionary German book and antique dealer opened a retail outlet – Der Damsche Silberschmied in Berlin in 1909 . Until the outbreak of war in 1914 this store alone would be responsible for the sale of almost all of Georg Jensen’s production. The Bredgade at Copenhagen

So successful was this enterprise that future plans were laid down and resulted in the construction of new workshops, as well as a large retail shop on the very fashionable Bredgade.

This was one of the most prominent streets in Copenhagen, originally laid out in the middle of the eighteenth century, and home to fashion stores, art galleries, fine mansions and law firms. The Palace of Fine Arts at San Francisco, the only building surviving today (reconstructed) from the 1915 Panama-Pacific International Exposition

The effects of the First World War on the firm of Georg Jensen were quite unexpected. Fearful, at first, of failure when the Berlin shop was forced to close, Jensen was gratified a Swedish dealer bought the entire stock he had exhibited at the 1914 Baltic Exhibition in Sweden.

American interest was sparked by newspaper magnate William Randolph-Hearst’s purchase of most of the Georg Jensen pieces on show at an international exhibition, a world’s fair, which was held in San Francisco in 1915 only nine years after its devastating 1906 earthquake. 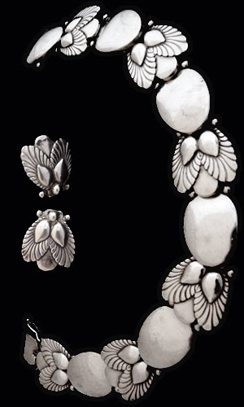 This amazing event attracted more than 18 million visitors from around the world and it is reported that a ‘sense of wonder’ prevailed.

The purpose was to celebrate the completion of the Panama Canal, but the city saw it as an opportunity to showcase its recovery. It is the event that surely launched Georg Jensen as an international brand. Back home Danish sales increased steadily while orders from Sweden continued to rise. The company expanded many-fold under various chairmen and directors, some of who were Jensen’s relatives.

Many were far more suited to the aggressive thrust of the business world than Georg Jensen, so it was in many ways for him it was a gift.

However it would be his own lack of artistic jealousy that would enable him to attract other talented designers to work for him in his workshops, regardless of their diversion from, or allegiance to, the prevailing Jensen style.

An early and long-sustained association with designer Johann Rohde, who began to produce beautiful objects for Jensen around 1906, certainly bore great fruit. Both artisans were concerned with fluid, rounded shapes for hollow wares and flatware, which were decorated with high and medium relief as well as applied fittings in a vegetal or floral decorative style.

Rohde was also responsible for one of Jensen’s most durable designs, the 1915 Acorn pattern for cutlery and other items.

Georg Jensen’s brother-in-law, Harald Nielsen, was another important designer, almost from the beginning.

During the post-World War One period, Nielsen became the first of Jensen’s designers to be influenced by the newly-emerging European predilection for first simple classical and then more functional forms. His shapes were generally very plain, with perhaps a single prominent feature 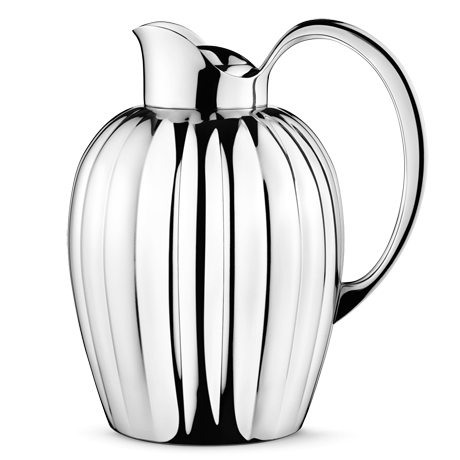 At the beginning of the 1930’s, the arrival of Sigvard Bernadotte (1907 – 2002) at the Copenhagen works signalled a complete departure from the up-to-now quite cohesive and universally recognised prevailing Jensen style.

Berndotte’s origins were in complete contrast to Georg Jensen’s own. He was born into privilege, the son of Crown Princess Margareta and King Gustav Adolf, head of the remarkably able and artistic Swedish Royal Family. At that time, functionalism was an important movement in the design world. Bernadotte would keep this aesthetic throughout his life, always coming up with new ways to combine the beautiful with the useful.

From the very start, Bernadotte’s designs were powerful, classical and innocent of any attempt at naturalism or even abstracted naturalism.

His other lasting contribution was as a member of the Georg Jensen Board of Directors, which soon had to steer the company through fast-changing times, as Europe built up to the Second World War.

In 1935, Georg Jensen died and the New York Herald Tribune saluted him as “the greatest silversmith of the last 300 years.”

He was at the time secure in the knowledge that the company he had started in such a small way was now in an unassailable position on the world market, and indeed in such a position that it would weather the storm of six years of warfare and emerge intact and healthy. 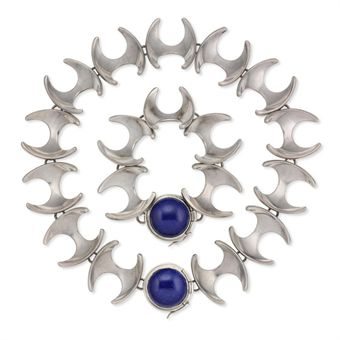 The need for new designers in the early post-WWII years brought the company’s attention to the work of an exciting young artist named Henning Koppel (1918 – 1981).

He laid the groundwork for the characteristic elongated, fluid, amorphous shapes found in Jensen silver work of the 1950’s and 60’s. His necklace and bracelet from the 1950’s is like all other Jensen jewellery, stamped with the maker’s mark.

His most famous bracelet, designed in 1947 was a cluster of articulated links resembling elastic, dancing bones. Brooches of a similar shape had deep pools of sapphire or amethyst-coloured enamel highlights. 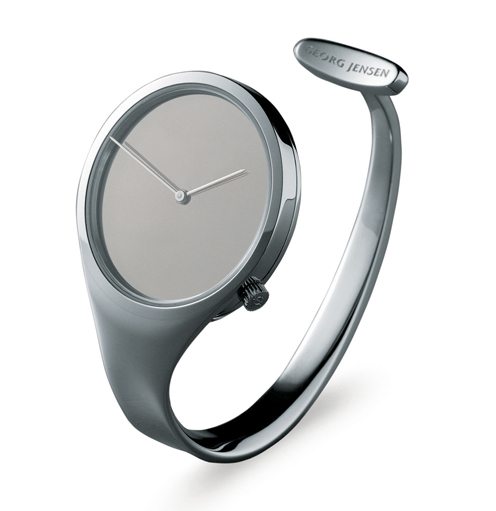 As the century progressed into the 1970’s and 80’s, the recruitment of equally talented designers continued and their characteristic strength of design is evident in the designs of Vivianna Torun Bulow-Hube  (1927-2004).

Her most famous piece, the Vivianna watch was designed because she actually disliked the relentlessness of time and how we are all slaves to it.

The original piece had no numbers at all, no hands and the face was a mirror, which was a reflective reminder that whenever you looked at it you were living the present moment.  The watch became the very first piece Georg Jensen put into production when they took over the manufacture of Vivianna’s pieces in 1967.

Handling a piece of original Jensen silver is as much a tactile experience as one of solely aesthetic appreciation. The fine hammer marks are visible on certain surfaces, the flawlessly smooth polish of sleek modernism on others, are a deliberate patination that allows the richness of relief design to stand out and take central stage. 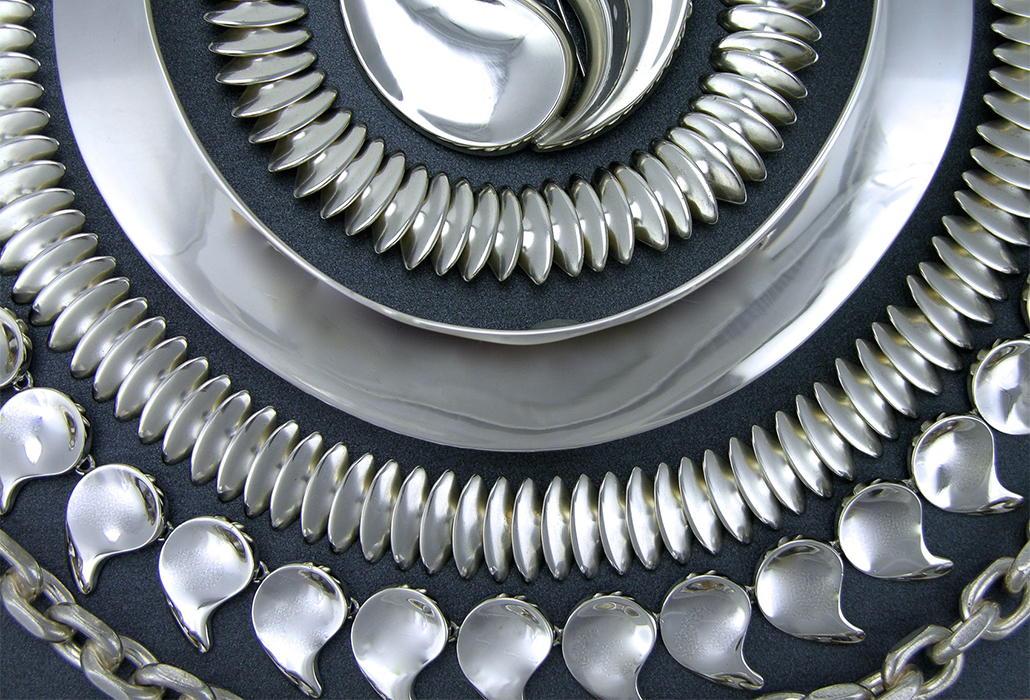 All these effects combine to produce the beauty of the wares now sold by the world-wide established firm of Georg Jensen.

Today a wholly new group of designers work under the Georg Jensen name, which has become synonymous with the very best in classic aesthetic beautiful design, fine quality and excellence in craftsmanship

Prominent Designers working for Jensen and their Dates

Christmas pudding is a perfect finale to the Xmas festive meal and my Mum’s pudding is an ongoing tradition baked in October or, on Stir up Sunday in November