The wonderful allure of horses has, since time immemorial, captured the imagination of people in many different cultures and lands. The bond of nature and loyalty that grew up between them has been recorded in all sorts of stories from antiquity to the present day.

Those who have worked with horses are moved always by their stoic nature, never giving up in the face of all odds and often performing the most unimaginable feats.

With the advent of the motorcar horses were in the main relegated back to the fields and meadows or to perform in the world of sport and it became important for their owners to record their, and their rider’s achievements. 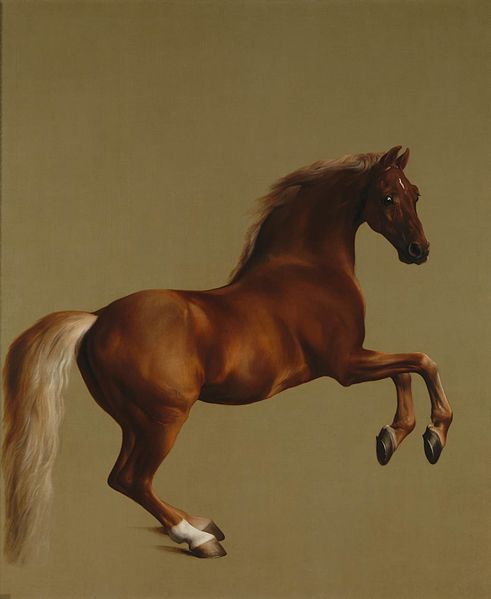 The most outstanding equine artist of his time was painter George Stubbs (1724-1806).

With a number of his works conserved in the Tate Modern at London, Stubbs now stands alone, towering above all other practitioners in the field of animal painting in his day, yet in his own day the artist establishment looked down on him.

However it did not deter many of the most important men in the land from commissioning great works from him and in retrospect he has gained great respect and success.

Being a trained observer with an expert anatomical knowledge of the horse meant that Stubbs always produced a portrait of great immediacy, like the one of Baron de Robeck riding a bay hunter, one whose impact was heightened still further by the striking contrast drawn between the colour of the animal’s coat and the sky beyond. 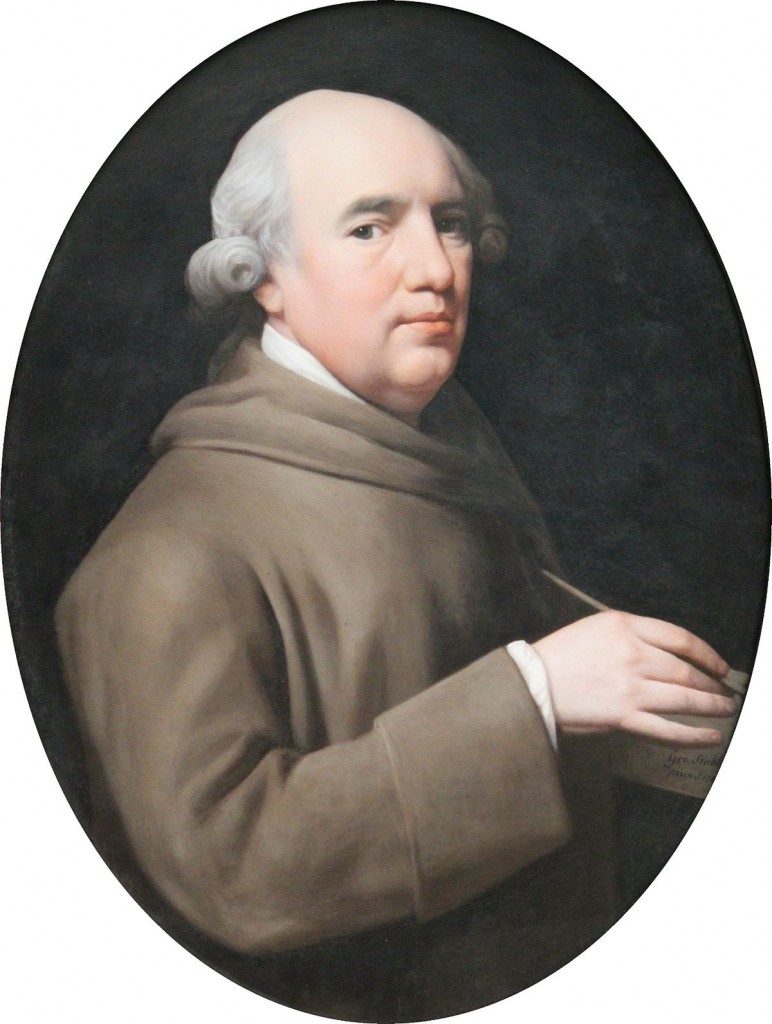 George Stubbs was a consummate recorder of the thoroughbred horse, one custom designed for beauty, breeding and speed. He gave them vitality, capturing the essence and uniqueness of each animal.

Whistlejacket was foaled in 1749 and his most famous victory was in a race over four miles for 2000 guineas at York in August 1759. Stubbs’s huge picture of him was painted in about 1762 for the 2nd Marquess of Rockingham, Whistlejacket’s owner and a great patron of Stubbs. His genius flowered astonishingly in the celebration of English sporting and country life.

His portraits of horses reveal his ability to showcase an animal full of personality. The clear depiction of veins, bones, muscles and distinctive characteristics distinguishes his works. 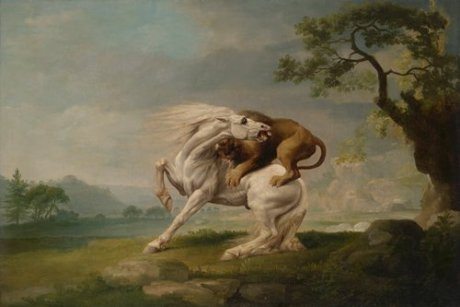 Stubbs travelled to Rome briefly during his early career and after he returned home he settled in Lincolnshire, where he spent time researching and dissecting horses for nearly two years to produce his major work ‘The Anatomy of the Horse’, which was published in 1766.

At Rome Stubbs had seen an antique statue of a lion clawing at a horses’ back and it inspired him to paint many studies on the theme. The one in the National Gallery of Victoria in Australia is particularly expressive, the horse’s terror easily discernible. His informal groups of horses, such as Mares and Foals in a Landscape produced mainly between 1760 and 1769 are very impressive. They were rendered for various aristocratic patrons with an extraordinary naturalism, which was completely unprecedented at the time. His visit to Rome, no matter how brief, had helped him to develop a ‘classical’ process following principles attached to producing a great frieze in ancient classical art.

The way the horses are placed gives us an overall symmetry and balance to the grouping, allowing us to draw our eyes over the horses in a slowly evolving rhythm, which is very pleasing to the eye.

He made studies of his real life observations, which helped him in the studio to build up complex compositional structures.

He painted each of the horses first, attending to detailing them as set against a blank background. When he was satisfied he carefully inserted them into an English landscape. 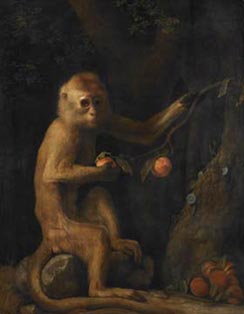 During the 1770s Stubbs was commissioned by Dr William Hunter, Dr John Hunter and Sir Thomas Banks to paint a number of exotic and rare foreign animal portraits, including a monkey. 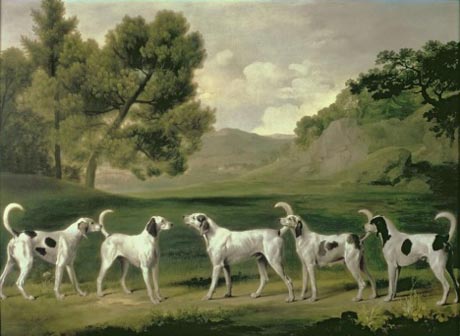 When he produced groups of other animals he followed the same formula, as revealed in a painting commissioned by the 2nd Marquess of Rockingham of his three dogs and two bitches.

The brothers used Stubbs’s pictures as illustrative visual aids in lectures they were giving. Banks was the president of the Royal Society and had an abiding interest in natural history.

Stubbs captured the beauty of the English landscape in many of his works and during his lifetime and afterward he gained a great following.

He was classified as a ‘sporting painter’, which meant that he was excluded from having full membership of the Royal Academy.

This must have been exceedingly hard to take in an age where the status of any painter was enhanced by having the best connections and full acceptance by your peers. 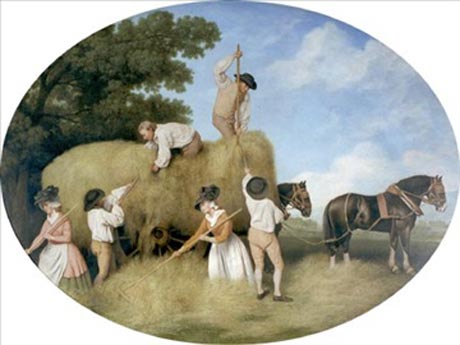 Stubbs was living through a period of great change with the development of art exhibitions and the production of prints emerging to satisfy the ever-expanding need of the bourgeoisie to furnish their houses. By choosing to record rural life Stubbs elevated and dignified his subjects, although not portraying the often-harsher realities of country life.

The scenes of peasant life he recorded in later life are good examples of an English ‘Arcadian’ idyll.

More than often the horses that he featured were seen with a recently trimmed and docked tail, which was entirely consistent with the fashion for presenting a horse at this time. Lit from behind by a low sun, the horse’s colouring was always shown to its full advantage.

Stubb’s fastidious observation produced a highly acute likeness of any of the horses that he was recording. He intensely studied and observed all of the horse’s characteristics; its posture, the head, the eyes, the elegant shape of the ears; the wide nostrils, its marked veins, the depth of its chest, the strength of its legs, its colour and unique markings and this would have been a source of pride for any owner. Sir Henry Vane-Tempest’s commission produced a magnificent study; the Hambletonian: Rubbing Down, which is considered now as perhaps Stubbs’s greatest achievement; exhibited first at the Royal Academy, London in 1800.

As vital elements in the breeding of horses features of the stud farm in the painting acted as potent symbols for Stubbs’s portraiture of important mares and stallions, whose owners wanted potential visitors and buyers to recognise the quality of the bloodstock he ran on his property.

All Arabians, no matter what their coat colour have black skin, which provided protection from the intense desert sun. Other coat colours included bay, chestnut, black and roan, although black is the least common. In this painting of a white horse Stubbs placed the horse towards the right side of the canvas, introducing a satisfying contrast between its pale coat and the stormy sky.

The line of his back and neck are echoed in the line of white clouds above. The animal’s orientation, facing the left side of the picture, is not repeated in any other single portraits before this setting, and the location of the covering shed between its legs unique among these pictures. 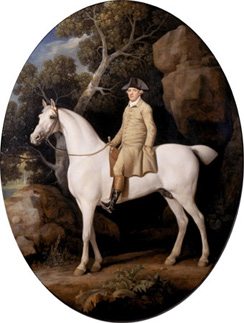 Clearly a costly commission for Stubbs to render, this white mare was obviously held in quite some esteem.

Most people associate Arabian horses with being white, while technically they are considered ‘grey’. They are one of the oldest breeds of horse in existence, archaeological evidence dates them back over 4,500 years.

There are many myths and legends associated with them they are an important aspect of great stories of courage, loyalty and faith in the days when man and horse bonded as one.

By the turn of the nineteenth century grey thoroughbred racehorses and hunters were uncommon. They were usually retired, aged 12 to 15 years, to stud. Grey horses turned white as they aged and so if he was recording a white horse, Stubbs did so with great luminosity. 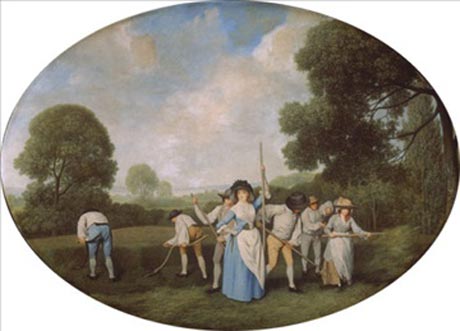 Richard Grosvenor, 1st Earl of Grosvenor utilized Oxfort Stud Farm’s many facilities for his own extensive equine activities. Stubbs generally used Oxcroft stud farm to pose his subjects when he was standing horses in a landscape.

During Stubb’s lifetime the technical innovations and marketing methods employed by potter Josiah Wedgwood made him one of the most famous and successful manufactures of his age, and for years to come.

Wedgwood invited Stubbs to stay at Etruria in 1780 where together they perfected the method of painting in enamels on ceramics.

When the pot was fired, the enamel vitrified in the heat, much like a glaze, but with far more delicate and subtle results.

For Wedgwood’s biscuit earthenware plaques proved popular and Stubbs produced a pastoral theme including Haymakers and Haycarting as rural peasant subject matter became extremely fashionable in the last quarter of the 18th century when Marie Antoinette was playing at dairymaids in her Hameau at Versailles.

In Spain Goya was recording rural sports in tapestry designs and back in England Gainsborough was painting English cottage scenes. He recorded his famous colleague and friend Wedgwood for posterity posing with his family. Josiah is seen reclining under a tree to the right and on the table is an example of his famous ‘black basalt’ ware. 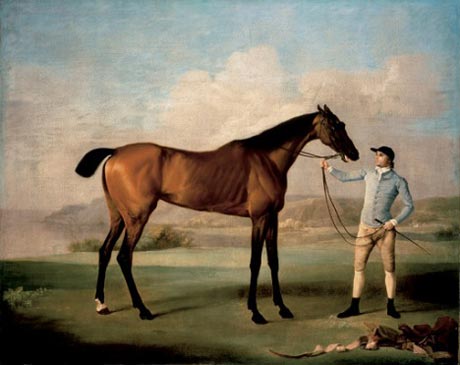 George Stubb’s painting of horses transcend naturalism, offering us today a rare insight into the qualities that distinguished the well-bred horse of his time.

His magisterial portrait of the thoroughbred racehorse Molly Longlegs for her owner Lord Bolingbroke emphasized the artist’s innovations in subject and made a compelling case for understanding him as one of the most gifted oil painters of his generation.