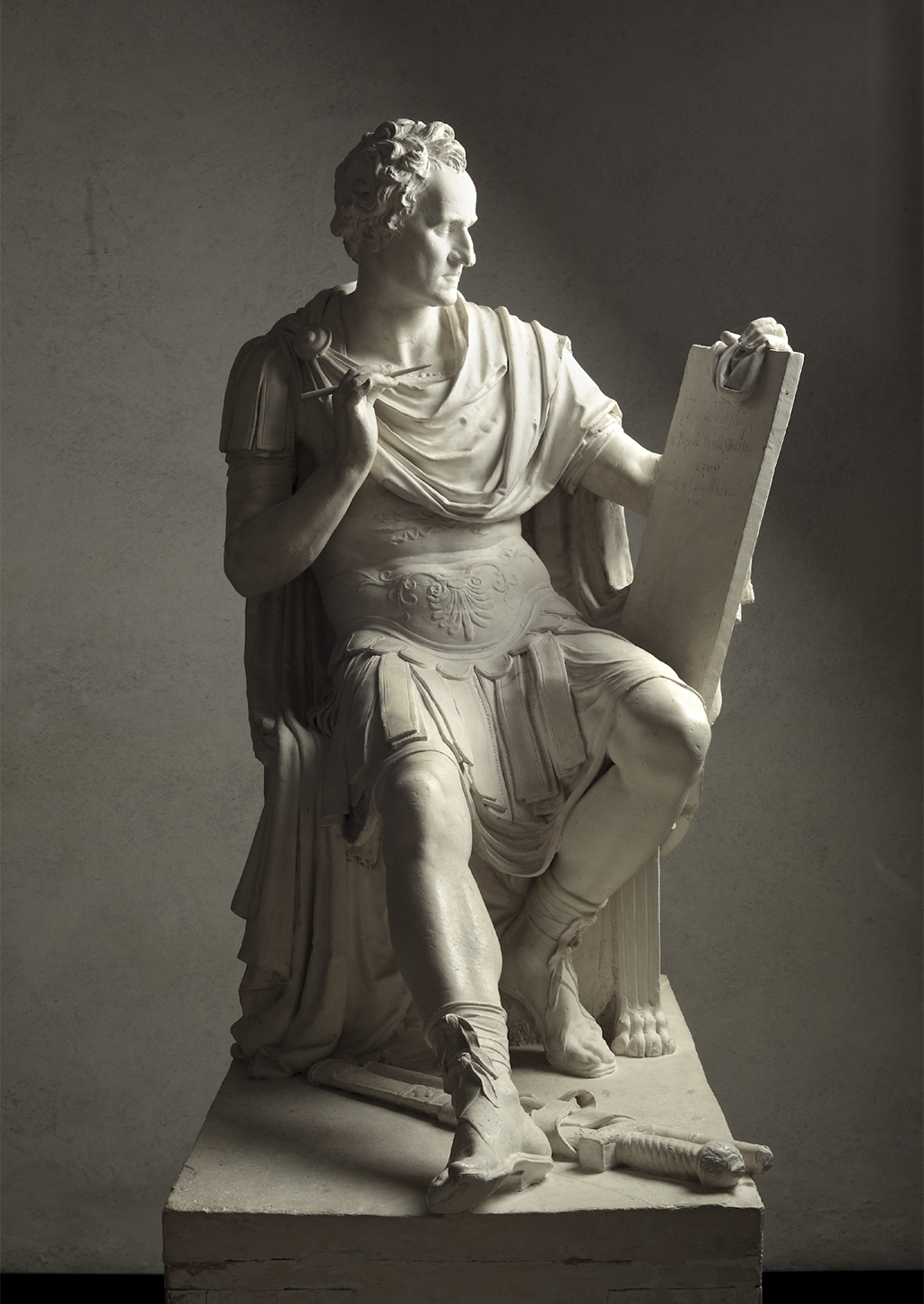 It has never left Italy before, but in a wonderful coup for The Frick Collection in New York, a modello by the Italian sculptor Antonio Canova (1757-1822) for his sculptural portrait of America’s great statesman and a founding father of his country George Washington  (1732-1799) will go on display in that town May 23 – September 23, 2018. 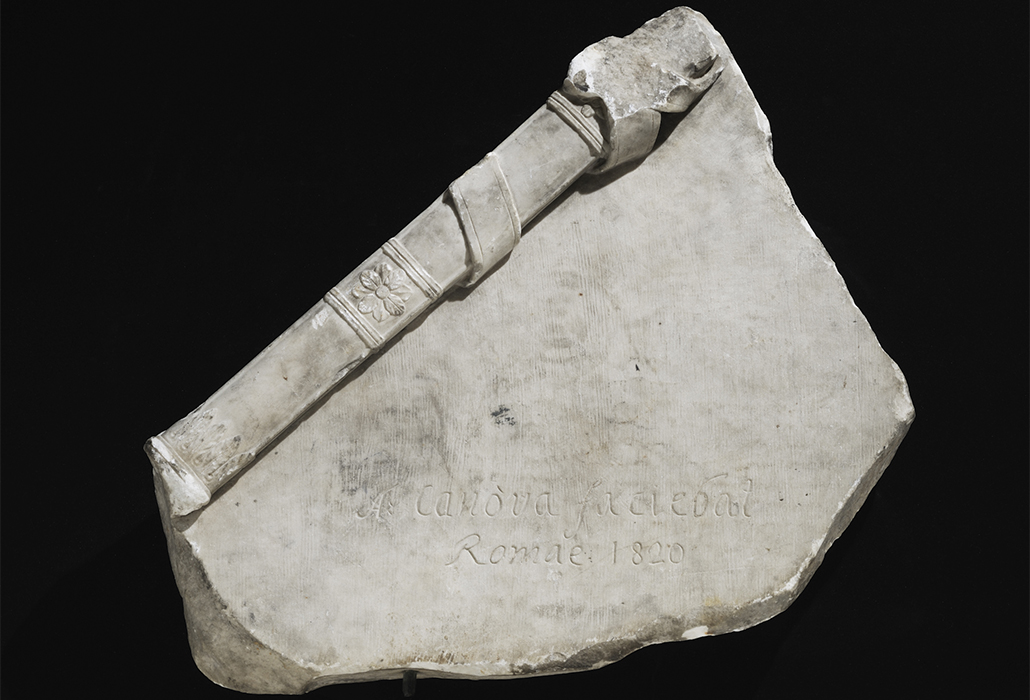 Canova’s lost masterpiece of  George Washington, included ancient classical references. The original was sadly destroyed in a fire that swept North Carolina’s State Capitol during the early 1830’s and today only the precious life-sized modello by Antonio Canova remains to tell the extraordinary story about what was a much-admired monumental work. 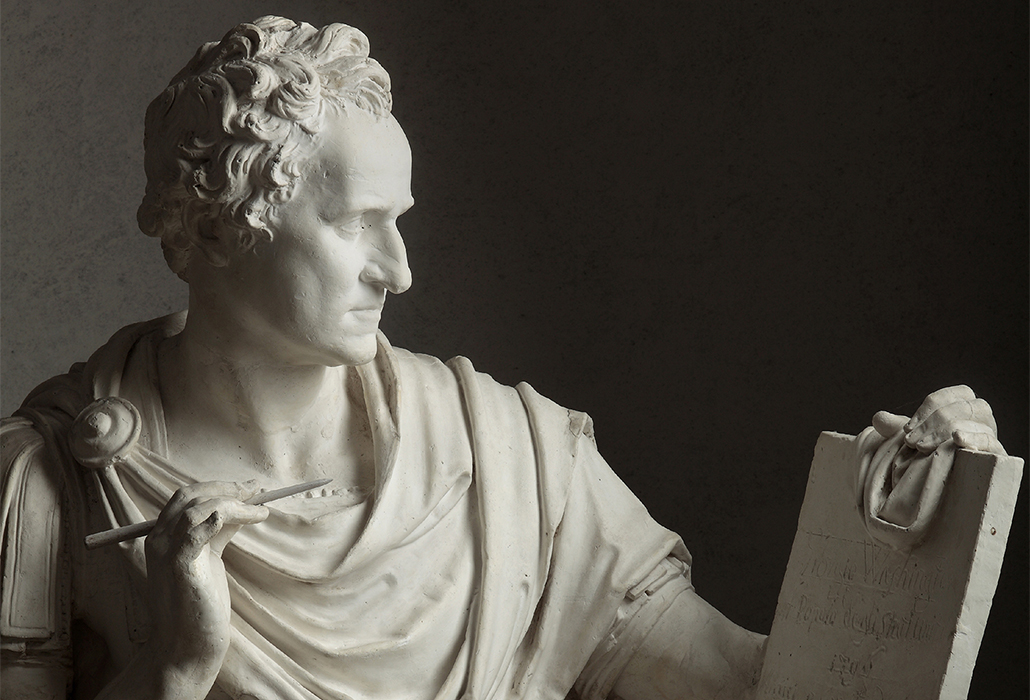 The modello will be displayed in The Frick Collection’s Oval Room by itself, where it replicate the effect it would have had when standing in the rotunda of North Carolina’s State Capitol. 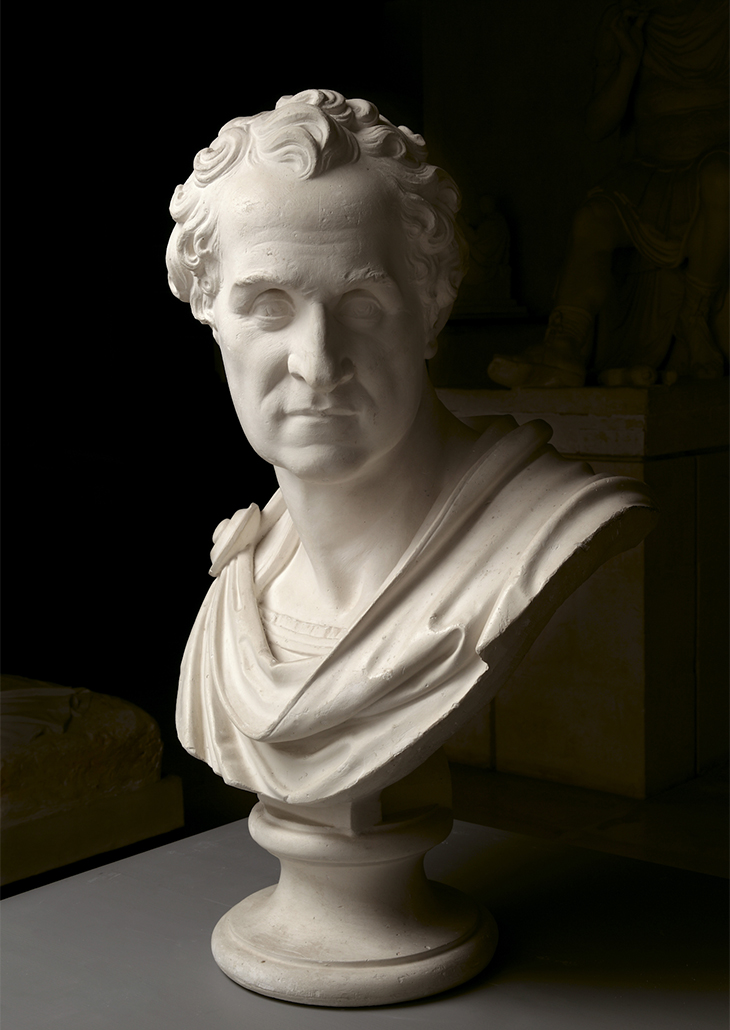 During the passionate age of the romantics and revolutionaries in Europe Antonio Canova had goals of achieving a balance between simplicity and idealism, without the melodrama present in so many works of the time.

He was not carving marble to express lace collars or satin skirts, but rather his aim was to strip away excess ornament and to reveal the soul beneath.

Whether carving an image of someone from mythology, or a famous person of his time in a heroic pose, Canova excelled at his craft and he achieved an outstanding reputation well beyond normal boundaries.

This exhibition should attract a whole new generation to become admiring of his works. 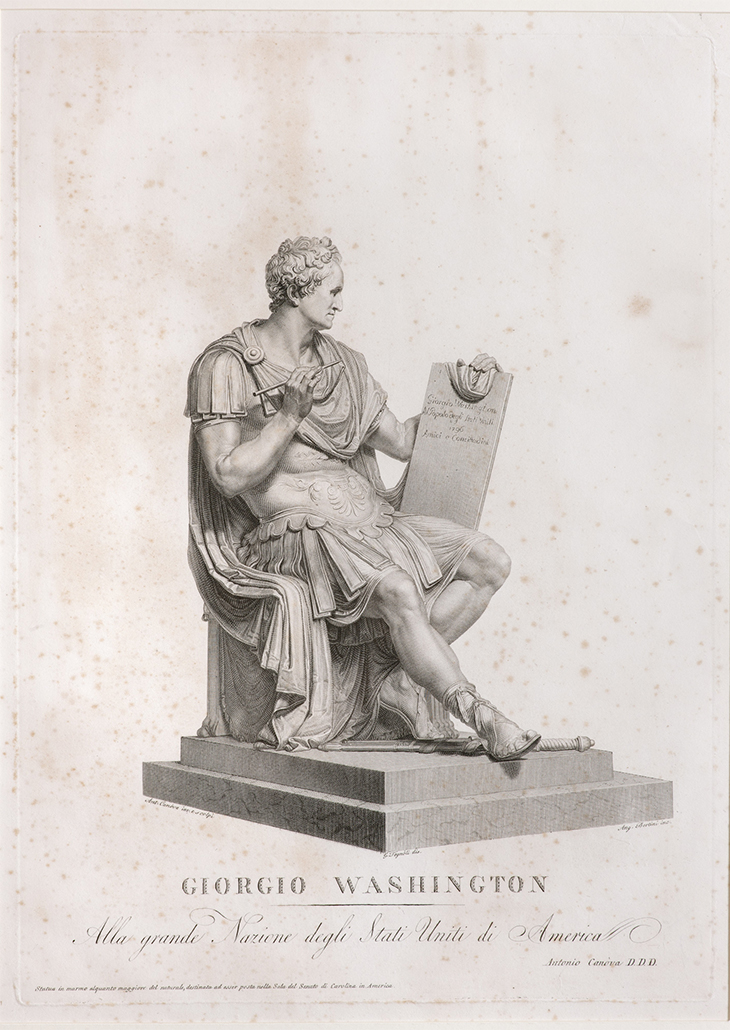 Rome is where Antonio Canova spent much of his life, becoming an active and influential figure in the artistic life of the city. In his own day ‘grand tourists’ came to visit his studio – a must-see tourist destination. 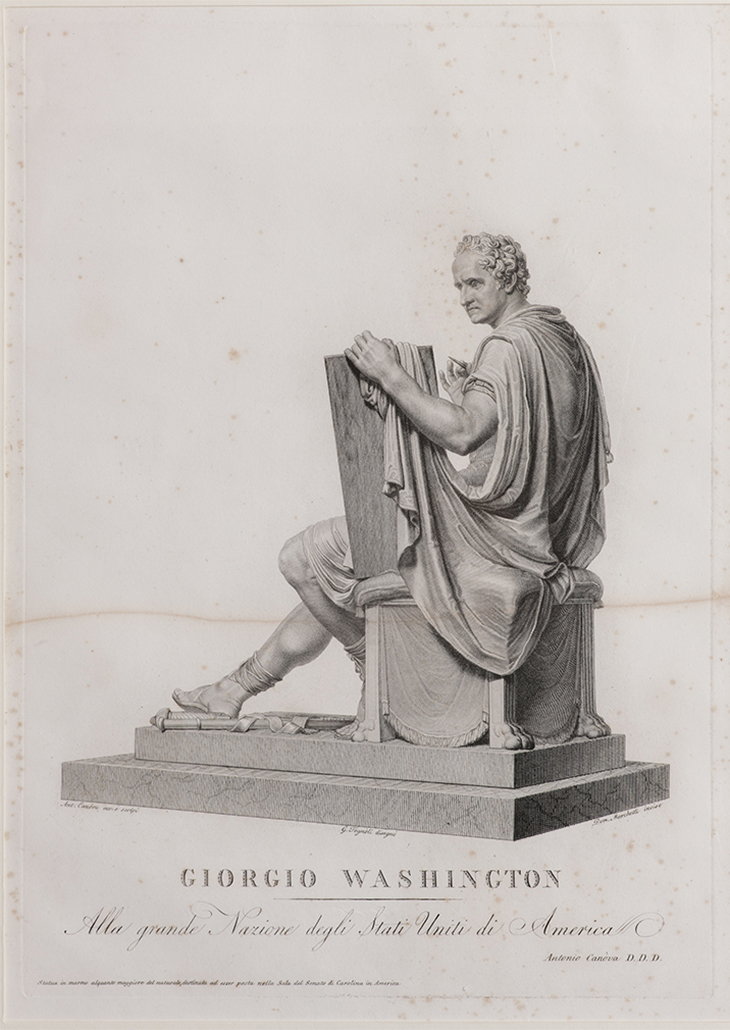 Canova’s understanding of the classical aesthetic was second to none and it is no wonder judging by the works he left to history, that Napoleon made him his court sculptor during his reign in France. His many other portrait statues included Napoleon Bonaparte and his sister the Princess Borghese, both of which have Roman references. 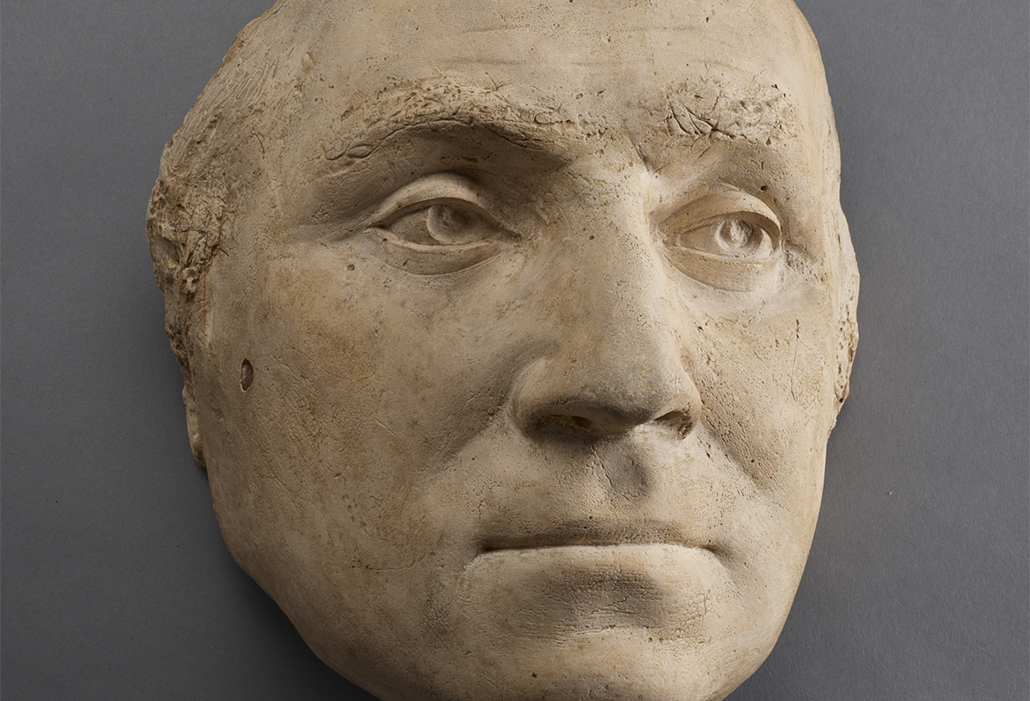 Also on view will be works by French neoclassical sculptor Jean-Antoine Houdon (1741-1828), Gilbert Stuart (1755-1828) an American painter from Rhode Island, as well as an Italian sculptor Giuseppe Ceracchi (1751-1801), all of whom recorded their impressions of George Washington for posterity. 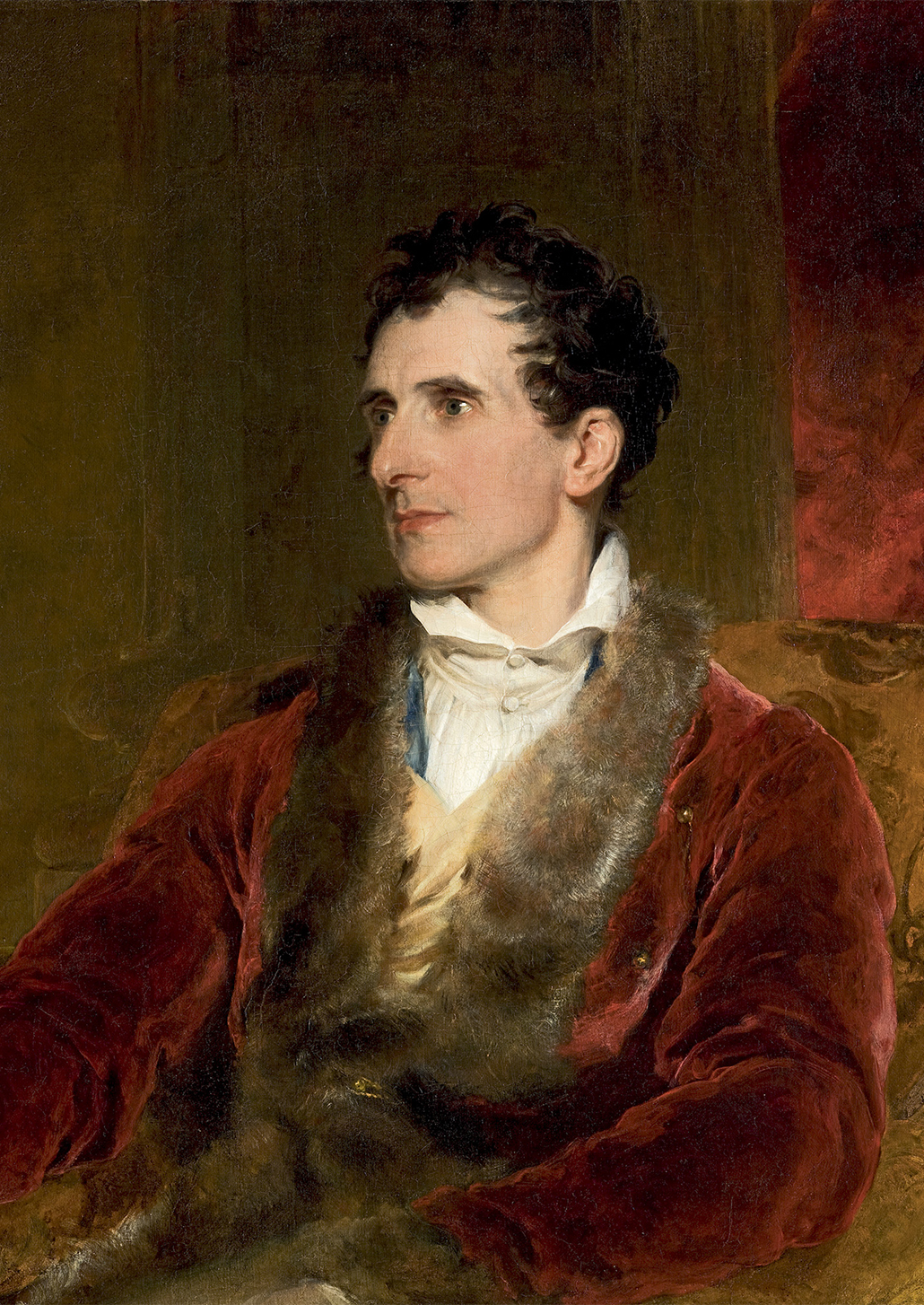 Sure, to be of particular interest, will be the spectacular portrait of Canova by leading English portrait painter Thomas Lawrence (18760 – 1830). Begun in London in 1815, it was completed at Rome in 1819 while the sculptor was at work on his image of George Washington.

One of America’s greatest statesmen, George Washington lived during the period when Neoclassicism became the preferred design style in England and Europe.

The increasing interest in archaeology and excavation both in Italy and Greece fired the imagination and for many sculpture historically expressed the sentiments of its time well, for the Romans such portraiture was tied up in with the commemoration of ancestors and considered pious to preserve. The portrait as a record of an individual’s personal appearance is one of the most successful and enduring genres of ancient Roman art. Today we would have no difficulty recognizing leaders such as Julius Caesar or Augustus from their surviving portraits.

Statuary was a greater part of what we would recognize as a superb marketing and promotional strategy that immortalized their looks from that day to this.

Copies of the most famous statue of Augustus the Prima Porta stood in niches throughout the city of Rome. Based on a Greek work of the classical period, its majestic pose put everyone under the spell of his lofty countenance

By the late eighteenth century, the theory behind classical architecture was not only being studied and discussed internationally, but also the remains of the original buildings were being closely examined in order the principles and ideas involved in their design would be able to be applied to contemporary architecture. In America for the new ‘Federal’ style elements were borrowed from the wide-ranging repertoire of restrained classical motifs where Thomas Jefferson was one of the people whose ideas and designs produced the Capitol at Washington DC.

Charles Bulfinch (1763-1844), the man considered the first American professional architect, toured Europe 1785-1787 studying architectural works in England, France and Italy was in charge of the work on the building between 1817 and 1830. 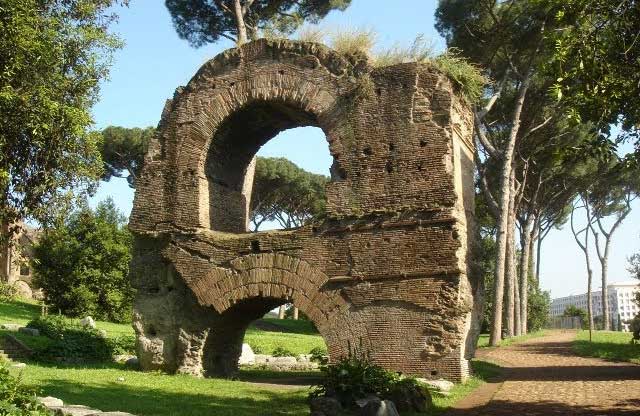 Remains Roman Arch on the Palatine Hill at Rome

The identification with the worlds of Ancient Greece and Rome in the eighteenth century had as much to do with people’s perception about early democracy, as it did with the antique rules that governed the development of architecture and design.

Painters and sculptors to a certain extent played a practical role, as essential recorders of contemporary life and experiences.  This was an age when life itself was seemingly on a day to day basis, full of drama, romance, honours and scandal as well as a cast of eccentric and interesting characters who wrote themselves into the history books.

George Washington was one. ‘These are the times that try men’s souls’ is a quotation from Thomas Paine’s The Crisis (published 1776-1783 in sixteen pamphlets), which not only describes the beginnings of the American Revolution, but also the life of Paine himself.

It was to George Washington when he was President of the United States of America, the man who was considered a career failure, but whose writings helped inspired a nation, journalist and author Thomas Paine wrote in 1751 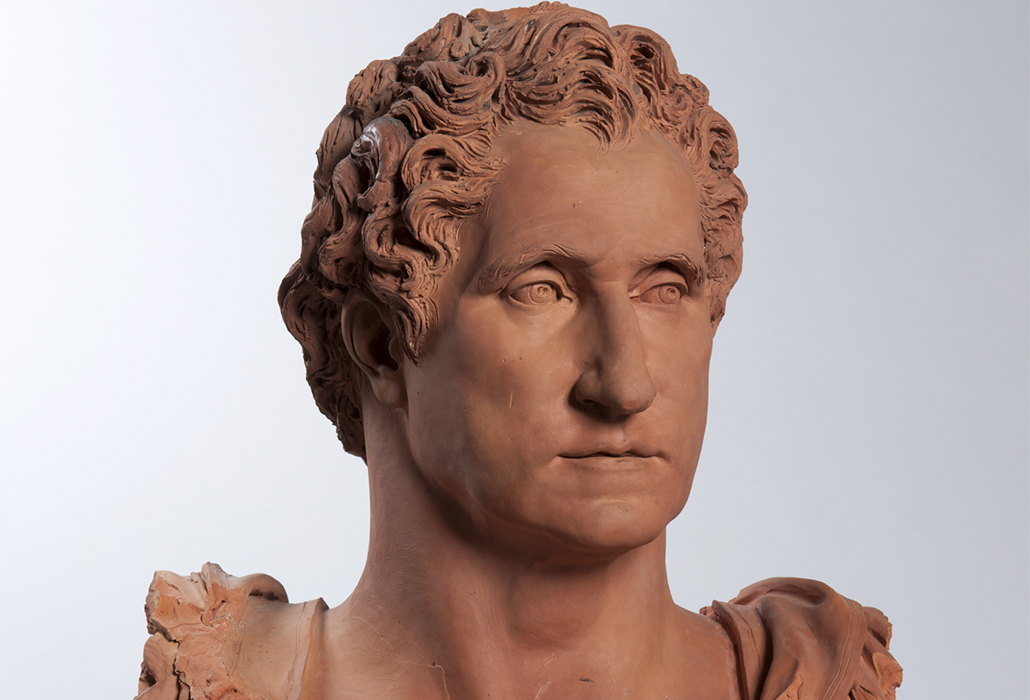 I present you a small treatise in defense of those principles of freedom which your exemplary virtue hath so eminently contributed to establish.That the Rights of Man may bec ome as universal as your benevolence can wish, and that you may enjoy the happiness of seeing the New World regenerate the Old, is the prayer of
SIR,
Your much obliged, and
Obedient humble Servant

Thomas Paine had a grand vision for society: he was staunchly anti-slavery, and one of the first to advocate establishing a world peace organization. He wanted social security for the poor and elderly, although his personal radical views on religion would destroy his success. By the end of his life, only a handful of people attended his funeral and his pauper’s grave is lost to posterity. 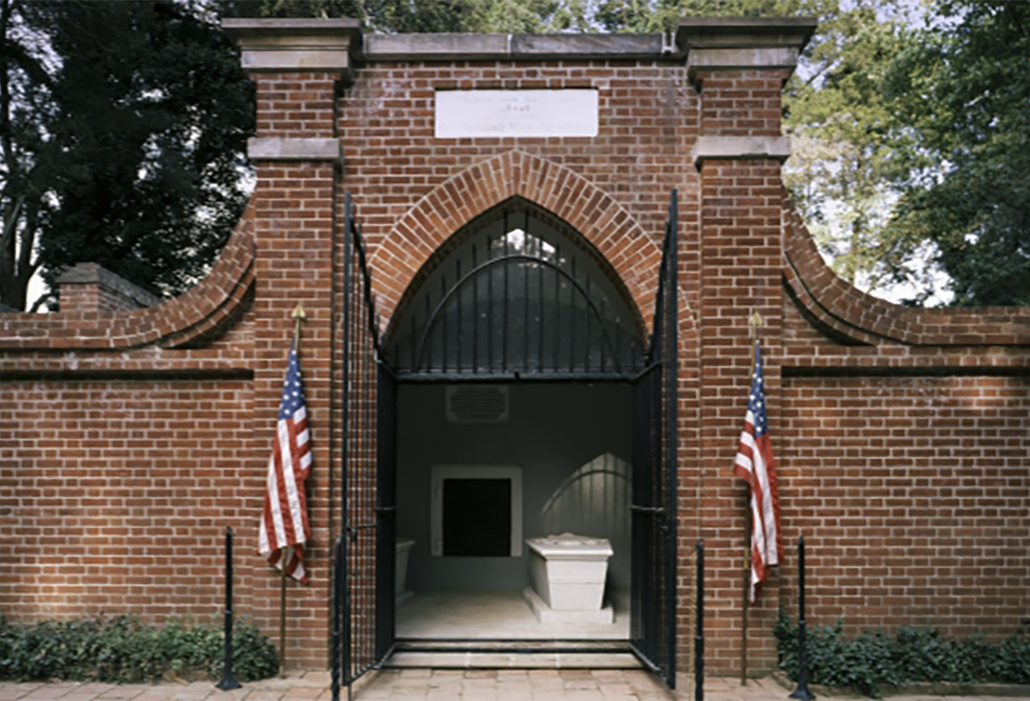 It was very different to the funeral and resting place for George Washington. Being a virtuous man who helped lay the groundwork for the establishment for the Declaration of Independence that claims all men are equal in rights, his life has ever since his death been celebrated. 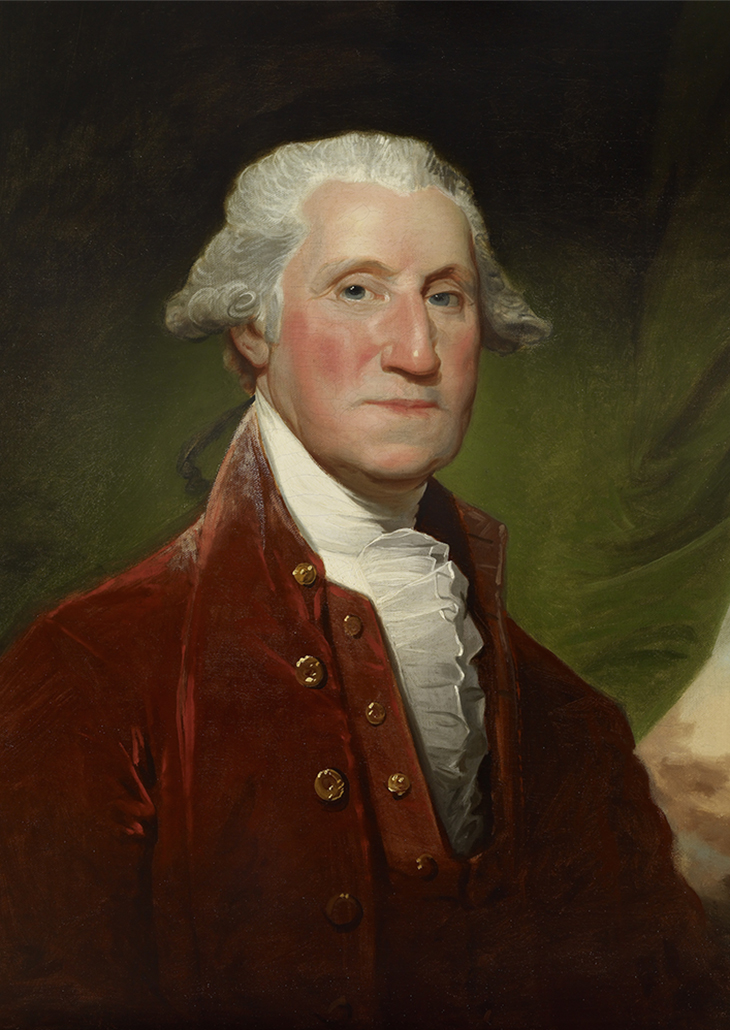 George Washington, born into a world in which slavery was accepted, by 1756 was at the head of the Virginia forces and one of the richest men in the land. He kept open house, entertained liberally, led the hunt and farmed successfully. He represented his county when the quarrel with England (1765-1770) broke out, favouring peaceful measures at first.

He soon became convinced nothing, save force, would secure his countrymen their rights from the King across the water. He took a leading part in the Continental Congresses, impressing people with his common sense while gaining a national reputation in the management of his country’s affairs.

Strategist, tactician and preeminent leader of men, George Washington took command of the New England farmers and mechanics assembled at Cambridge in the summer of 1775 and they held up the thoroughly disciplined and well equipped British Army, forcing their evacuation in 1776. 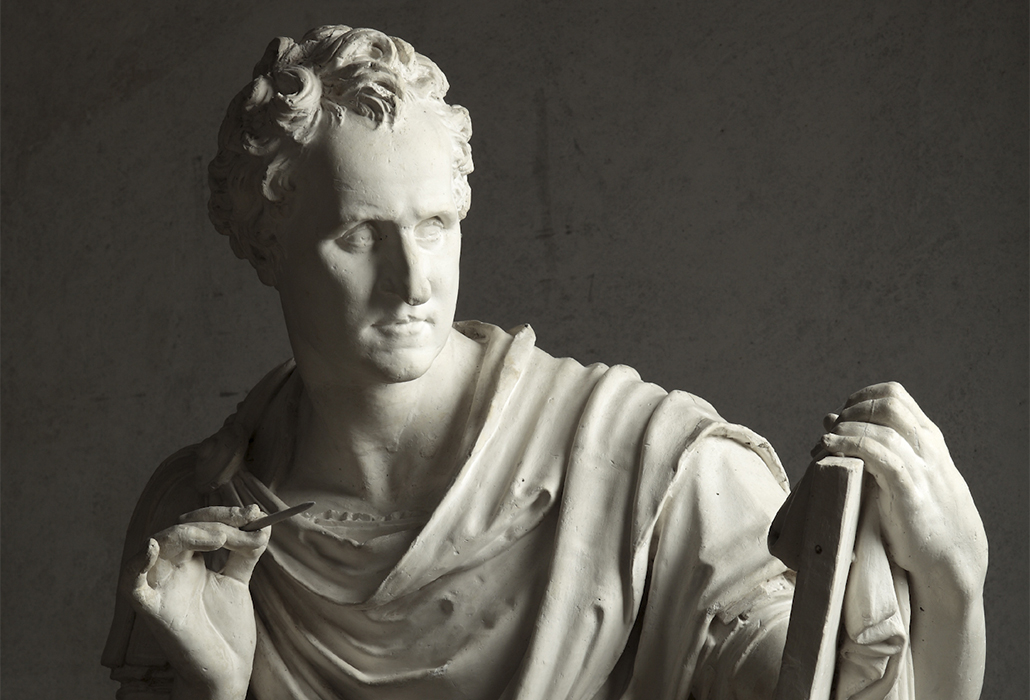 By the end of the War for American Independence George Washington had retired to Mount Vernon where he sought to secure a strong government by constitutional means.

He died there and in the years that have passed since, through the Civil War and two World Wars, Mount Vernon has remained the preferred destination of those people seeking to pay homage to his wonderful legacy. 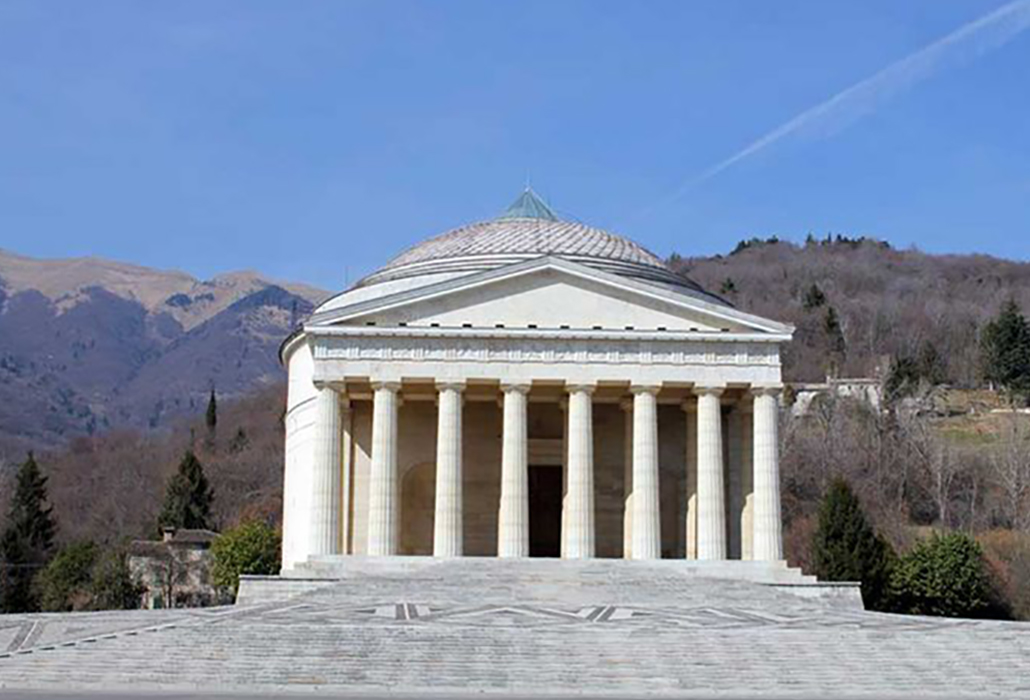 On the other side of the world Antonio Canova was buried at Possagno in a temple designed by himself, inspired by the great Roman monument the Pantheon at Rome, whose dimensions adhere strictly to classical Greek architectural ratios.

Today he is considered one of the most important sculptors in the History of Art. His Triumphant Perseus, purchased by Pope Pius VII in 1801, became the first modern work of art to enter the Vatican Collections.

As they did in the past, Melbourne’s Italian immigrants continue to contribute to the food and lifestyle of this city, promoting meals al fresco in the open air