Recently visiting Sydney and discovering a simply superbly designed and made George III regulator clock in its splendid case at Martyn Cook Antiques Gallery, Rushcutters Bay, caused me to reflect on the quality of timbers used during the so-called ‘Georgian era in English furniture history.

This period encompassed the reigns of the first four Kings of England bearing the name George from 1714 – 1830. The era sometimes bears the titles of the Age of Walnut or Age of Mahogany and Satinwood.

The timbers available at that time were really second to none and in this case the unique example of an early style of clock a regulator manufactured by Josiah Emery 1725 -1797.

A regulator was a particularly accurate long-case clock with a specialised dial. Invented during the latter years of the 18th century, it was all about gaining greater accuracy in time keeping, each of the clock’s hands working off a different mechanism.

Emery was an eminent Swiss watchmaker who had settled in London, and this stunning regulator has a wonderful case made from glorious silky smooth Satinwood and marvellous Mahogany.

With its lovely form and proportions, it is a most appealing piece of decorative art, it is an object that would easily grace a traditional or better still, contemporary interior in style, albeit a professional or personal space. Must say many of the amazing pieces Martyn Cook has in his gallery at the moment would look stunning in superbly designed high tech interiors. There is a stunning array of chairs, for anyone who wants to be seated in style, including a rare upholstered George II number, period mahogany wing chair on cabriole legs with pad feet replete with stunning Indian foliate needlework upholstery.

The quality of furniture produced throughout the eighteenth and first 20 – 30 years of the nineteenth century was certainly at a pinnacle in fine hand furniture manufacturing in England, Europe, America and down under in Australia, albeit taking place here on a smaller scale modelled on international role models.

The craftsmen who served long apprenticeships learned at the hands of masters and they reached very high standards in terms of quality of materials used, refinement of form and function, as well as skill in execution in all design disciplines.

The timbers at that time too were coming out of old forests and had extraordinary beauty of figure and the colours they produced via being hand waxed over a period of time, were extremely beautiful.

Satinwood and walnut both attained a rich golden glow that is very satisfying, while the strength and depth of beauty of early mahogany that ranged from deep reds to deep browns, was breathtaking. 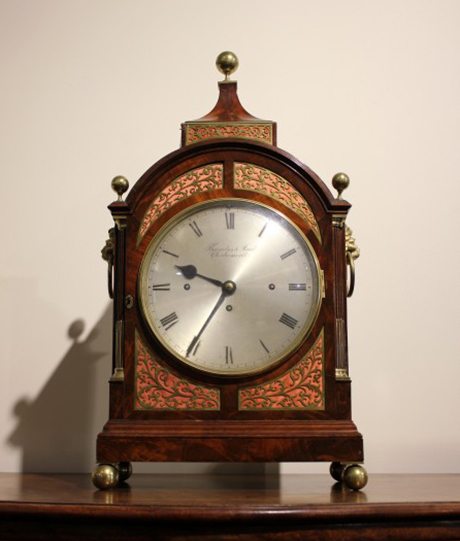 The unique conditions that reigned during the reign of the first four ‘Georgian’ kings, George I, II, III and IV ensured that artists and craftsman would attain the highest level of artistic freedom and achievement.

There was an incredible synthesis of the right combination of people, intellectual and spiritual ideas, historical events and social change.

Exotic timbers such as Rosewood brought into Europe in the latter end of the period were rich and lustrous.

They provided inspiration to those using their imagination to develop new and original ideas or things, especially in an artistic context.

An interior designer by trade, I do find it difficult that contemporary architects do not seem to use great antique pieces in their all-new highly rated ‘green’ buildings.

Much superbly designed antique furniture is made of exotic timbers now basically extinct around our world.

It would seem to most and me to make very good sense, perhaps more than ever before if we are truly being ‘green, to use them in contemporary interiors. At Martyn Cook Antiques I have to admit I really like the very simple, but handsome very robust and extremely statesman like ‘Housekeeper’s cupboard’ made in Lancashire during the 18th century.

It’s made of Oak a timber native to both the British Isles and Europe, although each with their own characteristics.

English oak was used extensively in early timber buildings of the Tudor period effectively, although most of the interior wainscoting and furniture was made of European oak, which had a straighter formation than the often gnarled and twisted English oak tree.

The cupboard being an eighteenth century production has the added sophistication of ‘classical column’s set into the cantered corners of the upper cupboard that also has striking brass hinges and locks that endow it with both an air of domesticity and a dash of class.

Nine lockable drawers service the bottom while the whole is raised on bracket feet. 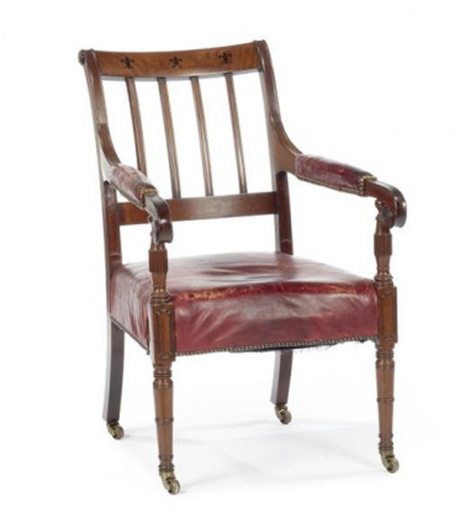 Inside the top section it has original wooden ‘hook’ pegs inside two cupboards flanking a central cupboard that is fitted out delightfully with an arched cupboard space for treasures and small drawers for spare cash or keys.

The Georgian age saw patronage, vision and creativity fused together ensuring an outpouring of brilliant design and superb craftsmanship in hand manufacturing.

Particularly fancy is a Regency style mahogany armchair with a trio of ebony fleur de lys inset into its top rail. With an aged red leather stuffover seat with scrolled arms and turned front legs standing on brass castors c1810 it is very appealing.

It was only during the reign of George as Prince Regent (Regency) who later became George IV, that the winds of industrial change would begin.

This meant the climate in furniture manufacture would gradually change forever as hand craftsmanship, along with an associated pride in work beautifully done, was taken over by machine.