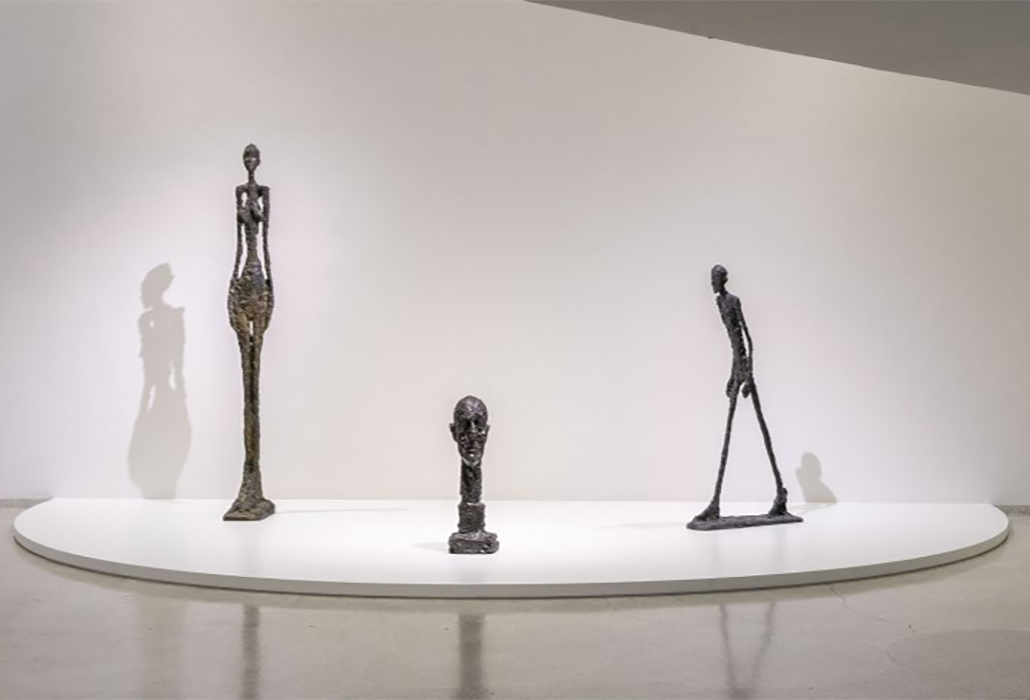 Alberto Giacometti (1901–1966) lived and worked in Paris. In a scruffy, modest alleyway studio, dense with plaster dust, wire and wooden armatures, frames, tools, canvases, tins of paint, benches, plinths, and a stool or two, he created a universe of utterly unique figurative sculptures and paintings that challenged and then changed the way we see the human body and think of the human spirit. 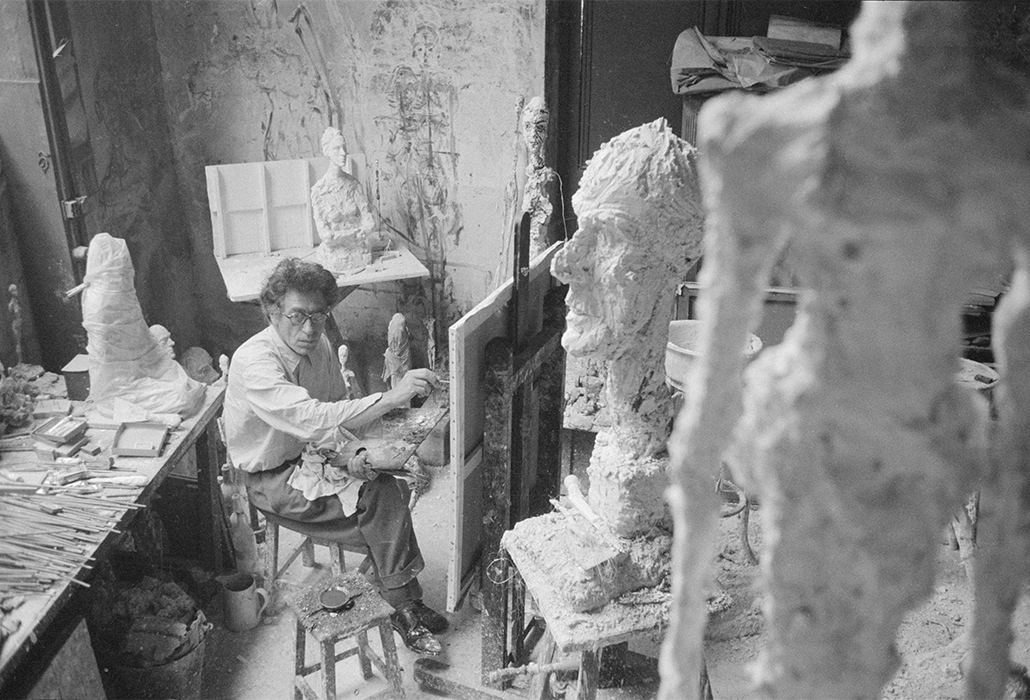 In photographs of Giacometti, in his studio, we see him as one with his work, seemingly spun from the same organic material, a legendary figure, an iconic face, an immeasurably moving human image of battered, ragged dignity.

In the mid 1930’s, in the ever increasingly brutal and dehumanizing convulsions of the first half of the 20th, Giacometti turned away from the surrealistic imagery of his early work and felt driven to engage directly with the bone hard reality and ineffable spirit of an individual human being.

The new imagery was born of creative anguish and grew out of the rubble and ruin of the world around him.

Giacometti modeled inchoate forms, often no larger than matchsticks, that materialized an essential state of being.

In the 1940’s and 1950’s, what emerged were images of a human kind that is stripped but resistant, that has survived, but is essentially alone, isolated in an eternity of anxiety. 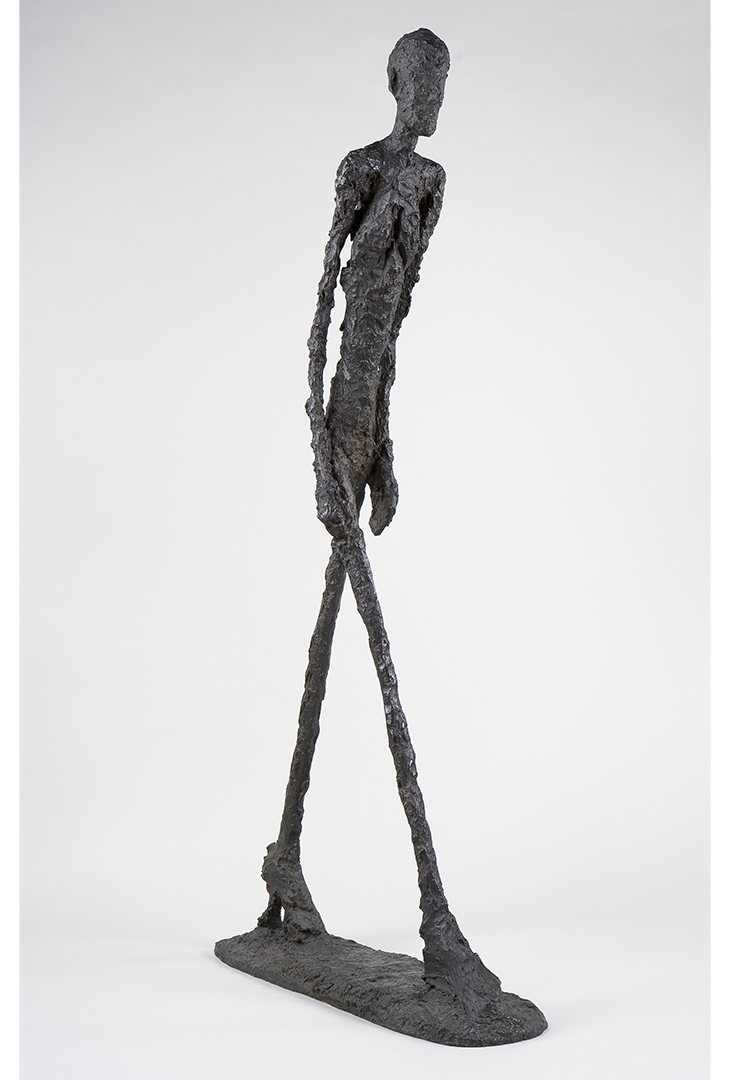 Whether the subject is a standing figure or a figure striding across an empty public square, or the subject is an intimate engagement with a portrait subject, normally his brother, Diego or Annette, his wife, what Giacometti is grappling with is how to express an intensity of being, of existing, in a world blackened and choked by brutality. 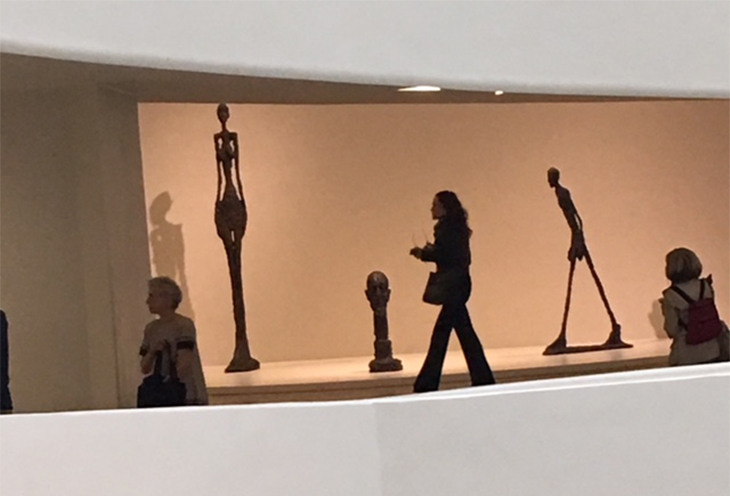 The answer was, for Giacometti, as it was for Samuel Beckett, to strip away from his work all that was inessential, the bright and gaudy distractions of life, the trinket, the vanities and concentrate only on the essential, the defiant residue that is life. 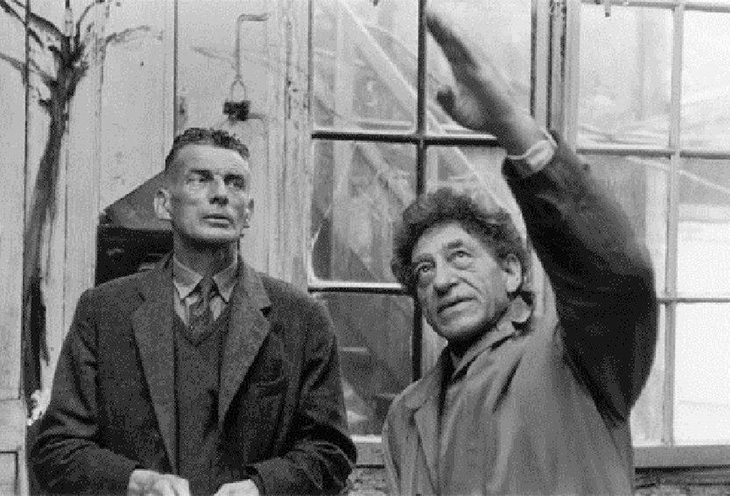 Samuel Beckett and Alberto Giacometti in 1961

It has, for me, always been for me one of the most inspired of all artistic collaborations, that Samuel Beckett asked Alberto Giacometti to design the set for the original production of Waiting for Godot.

In the photographic records, we have of that production, it is clear that Giacometti’s vision for “Godot” was a darkened stage with one bare, spindly white tree with a few white leaves center stage that is the station of the most action or inaction.

The characters exist and interact alone, in a dark and uncaring universe. 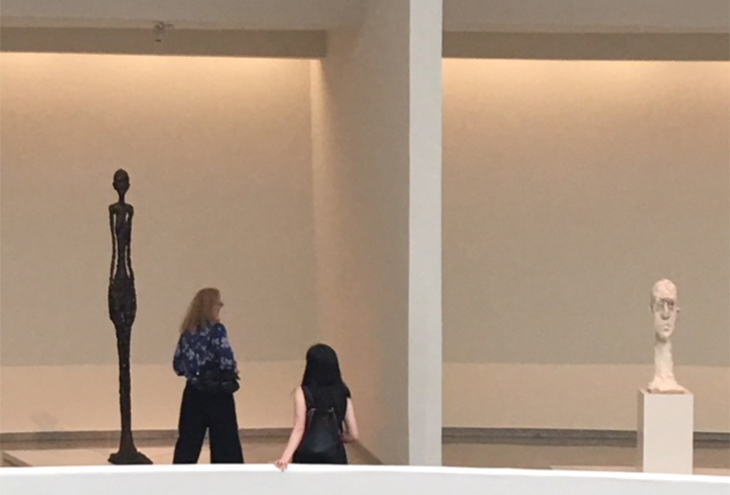 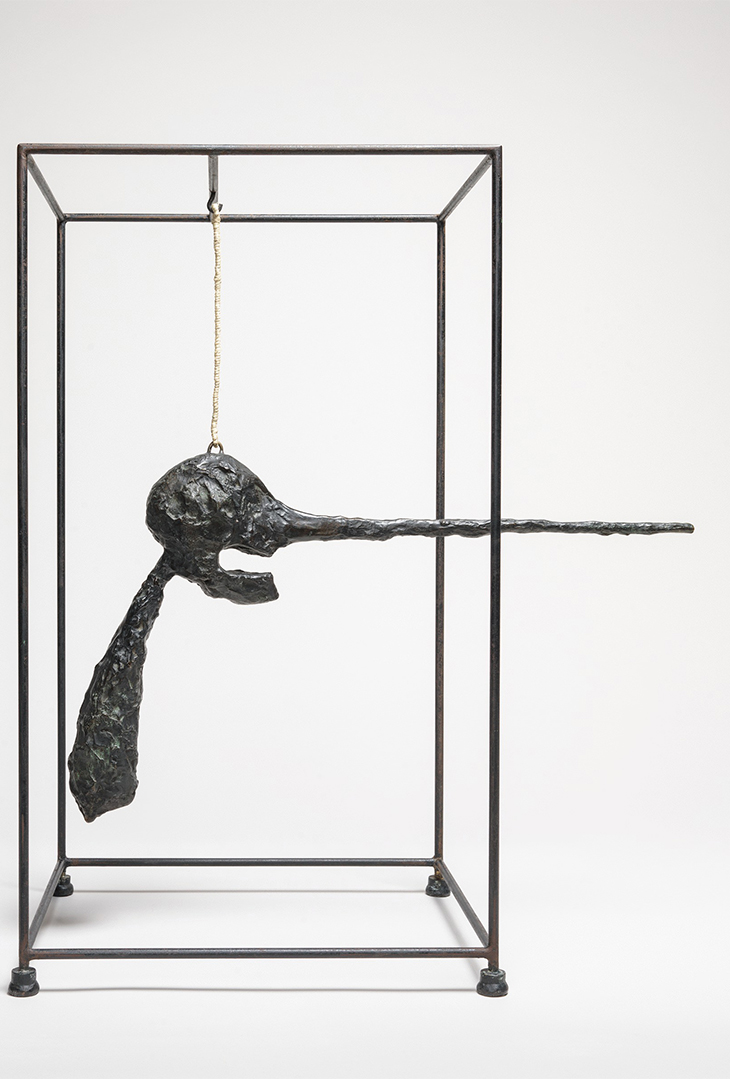 James Johnson Sweeney, the legendary director of the Guggenheim in its pre-Frank Lloyd Wright incarnation, was a passionate and early supporter and organized the first ever museum exhibition dedicated exclusively to Giacometti’s work. 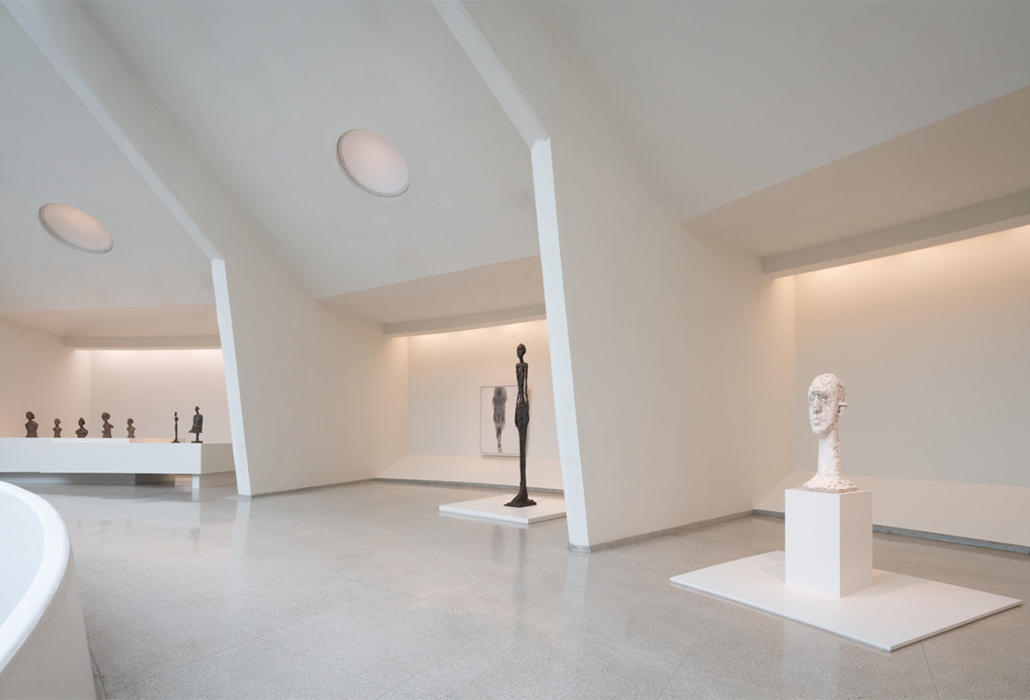 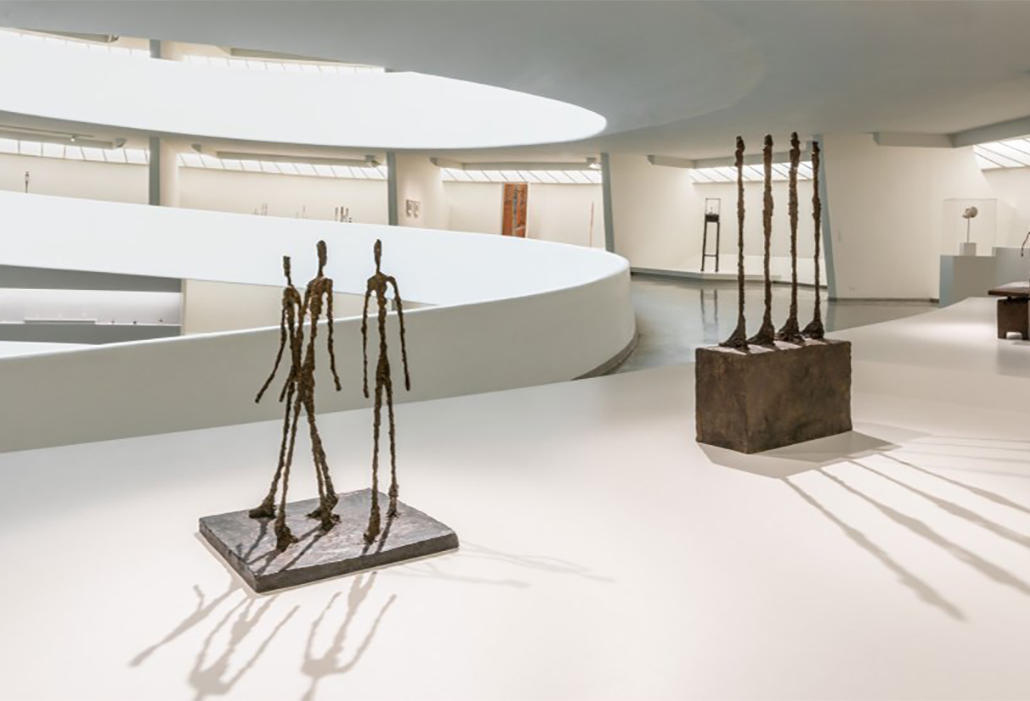 The reassuring rhythms of the spiraling continuous galleries and the plaster white concrete forms are a powerful symbiotic setting, a balanced yin and yang with Giacometti’s work.

As the gallery ramp curves, up from the ground floor, the first work installed on a long white wall is a single small scale monochromatic portrait, black through to white, a painting of Annette. 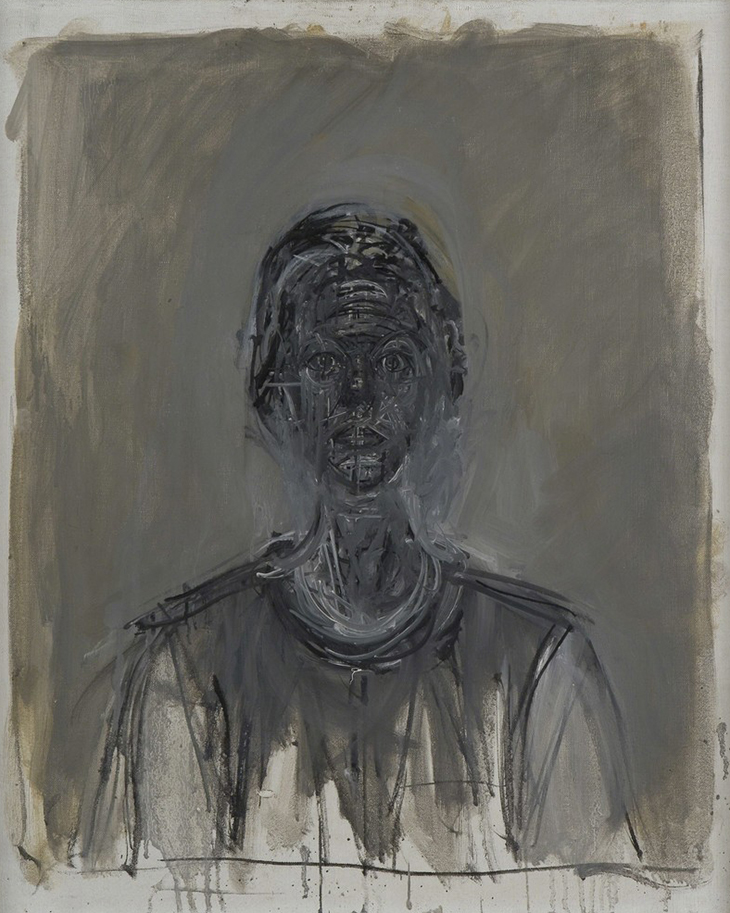 It is rendered in a web of flickering brushstrokes, over and over, probing, measuring, locating, mapping the face and soul of Annette. Timeless and immediate, urgent and tender, “Black Annette” returns our gaze and stares into our soul. 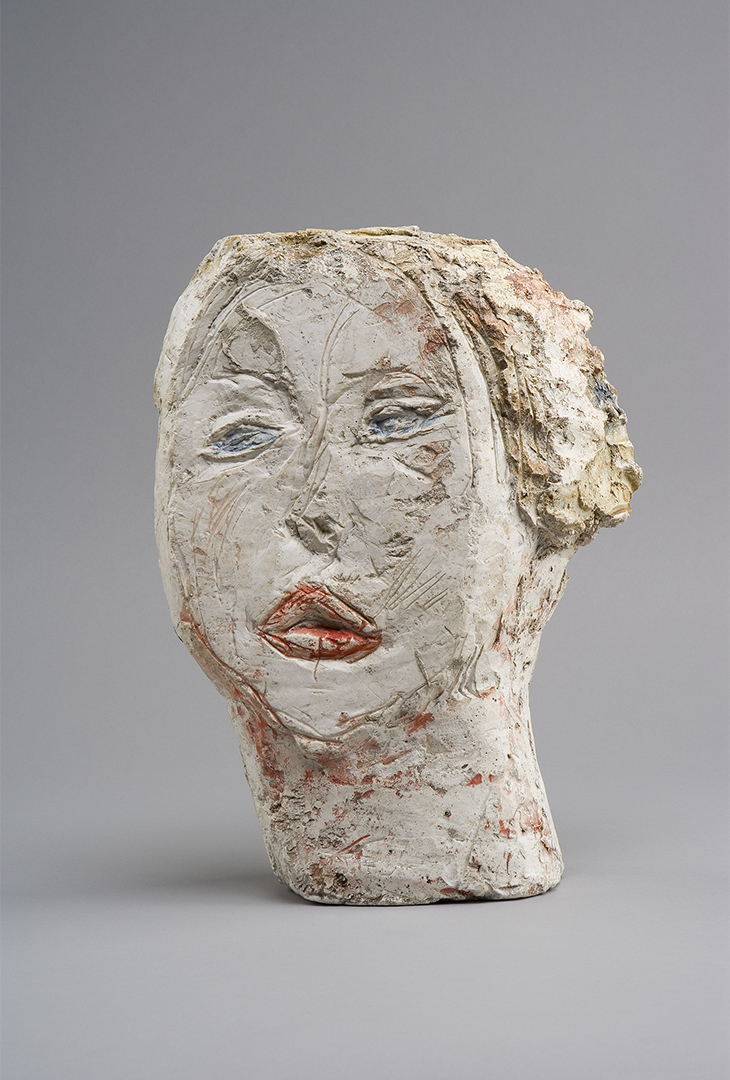 Alberto Giacometti took the pain and suffering of his world and recast it as an insistent question about the resistant dignity of humanity. Amid the forces of annihilation, of “no”, his figures stand and register “yes”. Eyeball to eyeball, they demand “yes”.