Gian Lorenzo Bernini (1598 – 1680) perhaps more than any other artist in history, was decisive in shaping Rome’s present day appearance. Born in Naples and trained by his father a Florentine sculptor Pietro Bernini, who moved his family to Rome, Gian Lorenzo quickly became a shrewd promoter of his own talent and sure of his worth.

He had a wonderful understanding of surface textures, of skin and hair and could depict fleeting facial expressions with great realism.

Bernini studied antique Greek and Roman marbles in the Vatican and 16th century Italian paintings. He became a favourite of eight Pope’s during the seventeenth century, beginning with Paul V (1552-1621).

His sketch models,  some 40 in all, together with 30 of Bernini’s drawings went on show at The Metropolitan Museum of Art in a show called Bernini: Sculpting in Clay in New York in 2013.

They were retracing his unparalleled approach to the design process with a viewing of his terracotta studies. These clay models in the grand manner helped him to bring many of the incredible sculptures he completed during his lifetime to fruition.

Sculpture is the art of the intelligence* 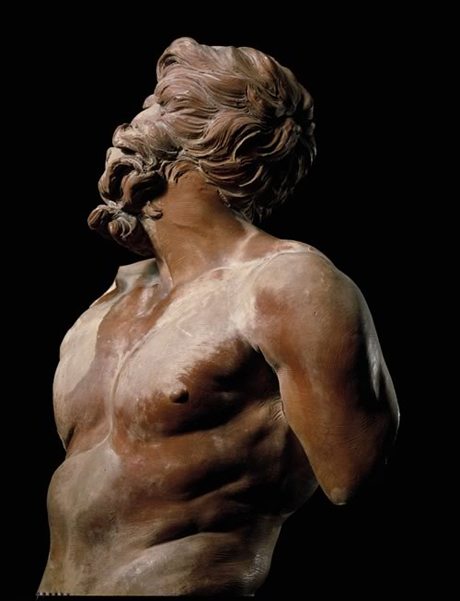 A dynamic terracotta model of a lion (ca. 1649-50), which was destined for the base of the fabulous Four Rivers Fountain in the Piazza Navona, as well as a model named The Moor (1653) are among his great creations.

Bernini’s largest and most fabulous surviving terracotta study, it turned up as recently as 2003 and was purchased by the Kimbell Art Museum in Texas.

It is likely Pope Innocent X Pamphili commissioned it in 1651, when Bernini was engaged to design a new centrepiece for the ‘Fountain of the Moor’, which is also in the Piazza Navona. With its architecture and fountains the Piazza is surely the grandest statement of Baroque architectural and sculptural style at Rome

Bernini lived at a time when devotion manifested itself in the grand manner, with outward and visible signs of grandeur and splendour.

The streets and squares of Rome became great outdoor galleries for displaying marvelous art works, as the church elevated its status through the patronage of its most competent artisans. 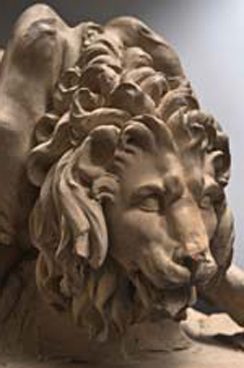 They employed both the visual and performance arts to provoke feelings of deeply felt spirituality among the people. The Pope’s heavily invested in beauty, boosting the economy and pleasing citizens, who flocked to church in unprecedented numbers.

The artisans and artists transformed Rome and Pope Urban VIII, perhaps Bernini’s greatest patron reputedly said that his star artist had been born “…for the glory of Rome to illuminate the century.”

Renaissance artists such as da Vinci, Raphael and Michelangelo also produced splendid works for the popes that entertained the notion, as English 20th century art historian Sir Kenneth Clark observed, that ‘can reconcile the two parts of our being, the physical and the intellectual’.

Bernini certainly owned the largest artist workshop of his day. In so many ways, like Pop Art Prince Andy Warhol during the 20th century, he had a positive attitude towards commercialism, one that allowed him to complete many important commissions.

There is no doubt his impact on design, in both architecture and the visual arts over the next century or more would be profound. Bernini Angels in the Vatican Museum

Bernini’s clay ‘sketches’ as they are known, were fired and they preserve in material form the images that he first imagined.

They ended up being some of the most spectacular sculptures ever executed.

At Rome they included models for the bronze figures of the Angels and Saints, which were created for the Cathedra and Blessed Sacrament Chapel in St. Peter’s Basilica, Vatican City.

Bernini was also commissioned to produce ten angels to replace the aging stucco angels at Sant’Angelo created by Raffaello de Montelupo , however he only finished two.

The angels carved by Bernini were so revered that they were never set up on the bridge, but were kept by Pope Clement IX for his own pleasure and then later placed in the church of Sant’Andrea delle Fratte at Rome.

The Angels atop the Ponte Sant’Angelo have since gained their own fame, highlighted by Dan Brown in his novel and the movie Angels and Demons. 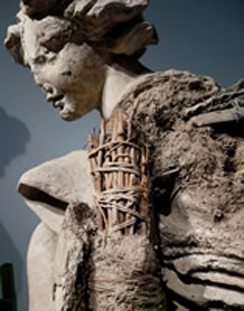 The clay models of the Bronze Bernini Angels created for the Cathedra and Blessed Sacrament Chapel in St Peters Basilica were recently restored.

The process allowed conservationists to understand how they were made out of a mix of clay and dry grass, which was then modeled in layers of varying thickness and composition around a framework of iron rods fixed to a vertical wooden support.

The models date back to 1661 – 1673 and are conserved in the Vatican Museums’ Pinacoteca. Some of Bernini’s terracotta models it seems bear the marks of the master at work because they also include evidence of his fingerprints embedded in the clay[1].

During restoration the Director of the Vatican Museums, Professor Antonio Paolucci noted that “we discover the creative virtuosity… of an artist whose dream was to sculpt the city as if it was one immense sculpture”. 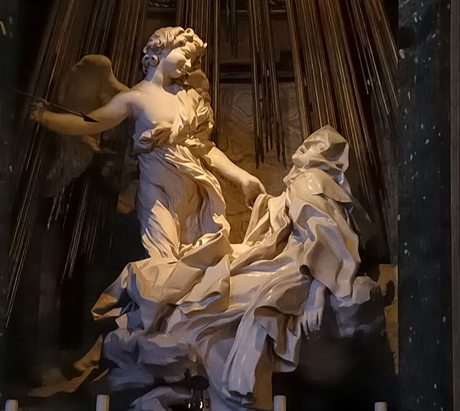 Bernini displayed unparalleled virtuosity and enormous skill to produce delicate special effects for his figures, which had formerly only found in bronze statuary.

He developed the Baroque style of sculpture to a highpoint of artistic achievement, carrying the idea of a three-dimensional figure to the pinnacle of what anyone thought was possible.

For many his greatest achievement is the so-called Ecstasy of St Teresa, which depicts the former Spanish Carmelite Nun Teresa of Ávila with an angel.

She was said to have had a vision during which an angel pierced her heart with a fiery arrow of divine love. This amazing sculptural group features the saint, swooning and covered by cascading drapery that is superbly rendered.

The architectural elements of the Cornaro Chapel where it is sited form part of the format of that holy place, where the Cornaro family could come to seek absolution or pray in privacy. They are there too, at least in material form, depicted in conversation, reading and at prayer.

The figure of St Teresa and the angel were completed in white marble and when natural daylight falls on the figures from a hidden source above and on the side they appear as part of a pictorial scene, which also includes the onlooker in the drama unfolding before them. What we now know as the ‘Baroque’ style of architecture and ornament was already in play when Bernini’s input began.

Its grand manner; the emphasis on progression and recession and the interplay of elements and characteristics from the classical design of antiquity, had been inspired by a century or more academic research of Rome’s ancient past. This had been taking place in monastery libraries all over the former empire since the 15th century.

People had also been searching about in the earth at Rome, and other former major ancient Roman centres all over Europe, for the remains of its most influential landmarks. As they were uncovered both physical and intellectually it would generate a creative explosion, the like of which has never really been seen before or since.

It was during the pontificate of Urban VIII (1623 – 44) that Bernini’s period of enormous productivity and artistic achievement was first realised. This was when he produced the immense gilt-bronze baldachin over the tomb of St Peter in St Peter’s Basilica at Rome.

He flanked the upper framework with four angels that support the orb and cross. It is hard to believe that it is as tall as a four storey building, an unprecedented fusion of sculpture and architecture and a highpoint of the Baroque style. Fountain of The Four Rivers, Piazza Navona at Rome

It was a centrepiece for a huge program of decoration conceived by Bernini for the interior of St. Peters.

This is when he really needed to rely on assistance from others so he could complete the commissions, which continued to grow.

As a fervent Roman Catholic himself, Bernini believed that the purpose of ‘religious art’, was to teach and inspire the faithful and therefore it was integral to the propaganda of the faith at Rome.

His fountains all throughout Rome are part of this period and his legacy.

The Piazza Navona was transformed during the pontificate of Innocent X (1644-1655) and also features the stunning Baroque style Palazzo Pamphili, built by Pope for his family between 1644 – 1650. It faces onto the square. 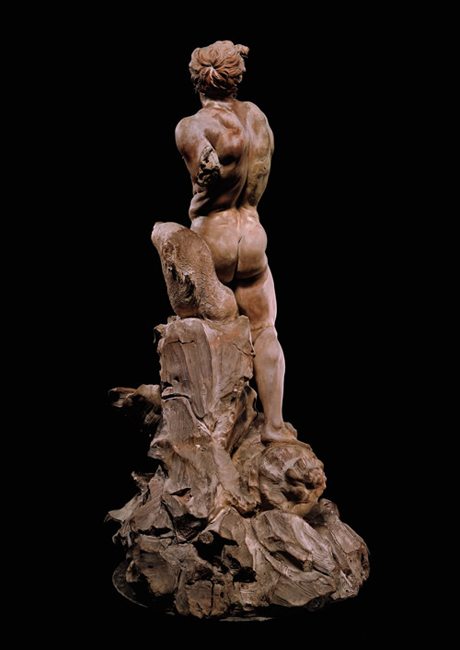 In the southwest is the ancient statue Pasquino, which was unearthed during the 15th century and brought to Rome where once a year on St Mark’s Day it was draped in a toga for people to pin derogatory comments to it. ‘

It was said to be ‘speaking’ for the people of Rome, denouncing justice and the misgovernment of the church.

Bernini was at the forefront of great change during the seventeenth century, his monumental works drawing inspiration from the mythology of the past and bringing it to life for a whole new generation in a display of sculptural virtuosity that animated and engaged all of Rome.

He also tried to gain commissions from Louis XIV in France by presenting drawings of what he could achieve on his behalf in 1665.

However, not renowned for his tact, he insulted the French court by boasting about Italian achievements over the French. 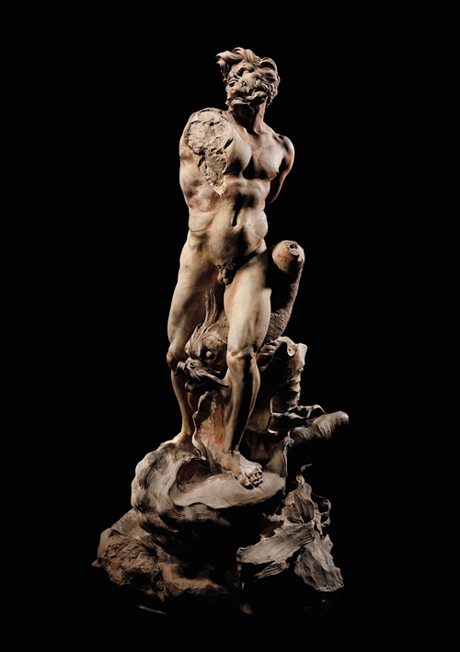 Forever the diplomat Louis detained Bernini with promises, just long enough for him to fashion a sensational bust out of marble of the famed ‘Sun King’, that is now a great treasure at the Chatéau Versailles.

He stalled Bernini so that his architect’s would get up to speed on studying his drawings and his style so they could competently produce a French version of the Italian Baroque.

English architect Sir Christopher Wren (1632-1723) was also clearly impressed; he managed to view some of Bernini’s drawings also while visiting the French court, carrying that imagery back home to England in his mind’s eye where he produced the English version of the Italian Baroque style at St Paul’s Cathedral.

When Bernini fashioned the splendid pair of curvaceous colonnades to outline the marble piazza in front of the palace of the Pope at Vatican City, surmounted by more incredible sculptures, he reached the highpoint of his achievements in architecture. The function of the giant space was to  hold the crowd for the papal benediction at Easter, which it still does today. He gave it the ‘grand’ treatment, providing an image for Rome and its citizens of the forever encircling arms of a church protecting its people, proving once and for all that in all aspects of his design that he was an artist triumphant.

Today we revere what Gian Lorenzo Bernini was able to achieve in an era that heralded unprecedented change in the growth of our society and its cultural advancement. The show in New York went a long way toward unravelling the design process allowing many people a rare insight into the incredible skill and artistry that goes into the creative process, from the mind, to sketches in clay and finally, to three dimensional reality.

Artistar Jewels, a show in Milan is sure to dazzle as it offers an unprecedented reading on contemporary jewellery, produced using ancient and modern techniques