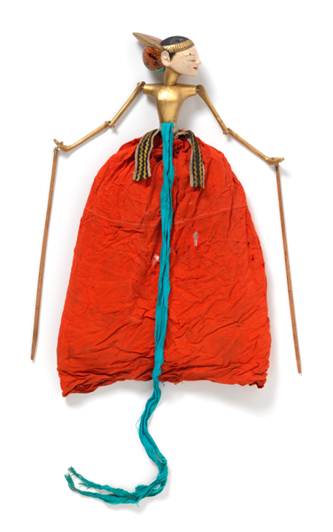 Our Young knight (Bambangan), wayang golek cepak puppet (early 20th century – mid 20th century) comes from the north coast Java, Indonesia and is painted and gilt-wood, cotton, rayon, bamboo, cotton (thread and string). It will be on display at the NGV International from 1 May – 30 August 2015 as part of Gods Heroes and Clowns: Performance and Narrative in South and Southeast Asian Art. Works included will come from India, Thailand, Laos, Indonesia and Cambodia and will include some 50 or more objects from a variety of theatrical presentations. This includes 26 painted wayung puppets from Indonesia, featuring clowns, court ladies, demons and ogres. Our Noblewoman (Putren) is a painted and giltwood ‘wayang golek cepak puppet (early 20th – mid 20th century) from the north coast of Java, Indonesia and was purchased by the NGV in 1973. Multimedia displays of video and photographs will bring to life the performance of these works, which were often accompanied by singers, musicians and dancers. Masks were worn, this Indonesian Topeng for Raden Gunung Sari (20th century) comes from Java, Indonesia and features pigments on wood, gold paint, hair and leather and was the gift of Mrs Summons in 1973. Complex stories of myth, history, magic, everyday life, pathos, bravery and humour, which resonate across time and space are set to captivate all new audiences. Highlights include a Buddhist narrative scroll depicting the Vessantara Jataka (Pha yao Phra Wet) from Thailand. Over 30 metres long, it is one of only two in Australia and will be displayed in its entirety for the first time and comes from the Khon Kaen Province in Thailand, a watercolour and ink on cotton purchased by the NGV supporters of Asian art, 2013. Carol Cains, exhibition curator, said about a large, elaborately painted cloth from India, Patachitra depicting scenes from the life of Krishna ‘Hindu epics such as the Ramayana have been a rich source of inspiration for more than a millennium, and continue to be so, demonstrating the universality of its themes. The NGV International will also present a contemporary sculpture by Cambodian artist Svay Sareth, commissioned especially for this exhibition. Gods, Heroes and Clowns will be accompanied by an online essay and series of public programs, including special shadow puppet workshops for children under four on 20 May and 10 June. They are sure to love the Gatotkaca, a wayang golek purwa puppet (early 20th – mid 20th century) made of painted and gilt wood, cotton, bamboo, metallic thread, cotton thread and string purchased in 1973. Gods, Heroes and Clowns: Performance and Narrative in South and Southeast Asian Art will be at the NGV International, on display in the Rio Tinto Gallery of Asian Art  1 May to 30 August 2015. Open 10am-5pm, closed Tuesdays. Entry is FREE