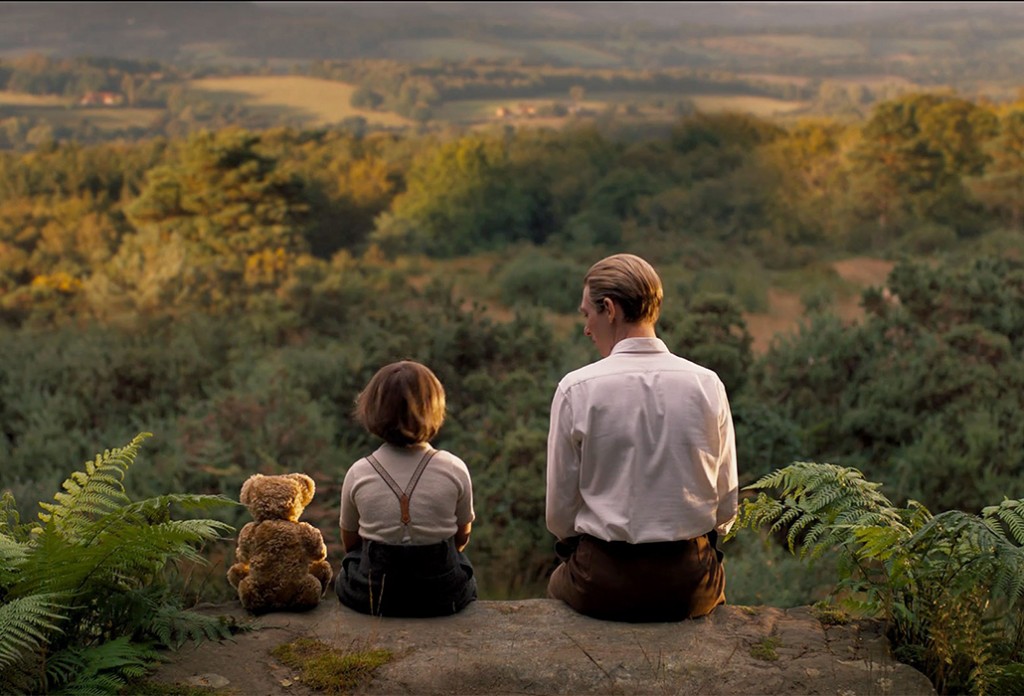 Goodbye Christopher Robin from Fox Searchlight, is a British film shot on location in the soft light of Oxfordshire, Surrey, East Sussex, and finally in period London. It screened recently at The British Film Festival in Palace Cinemas around Australia and will be generally released here on November 23.

Revealing how important art and imagination are during times when life is far from ideal, Goodbye Christopher Robin could easily have been named Saving AA Milne. This is not a children’s movie so parents beware, it’s a grown up story for adults for whom Winnie the Pooh and Christopher Robin mean a great deal. It’s the story behind how the great books were born. 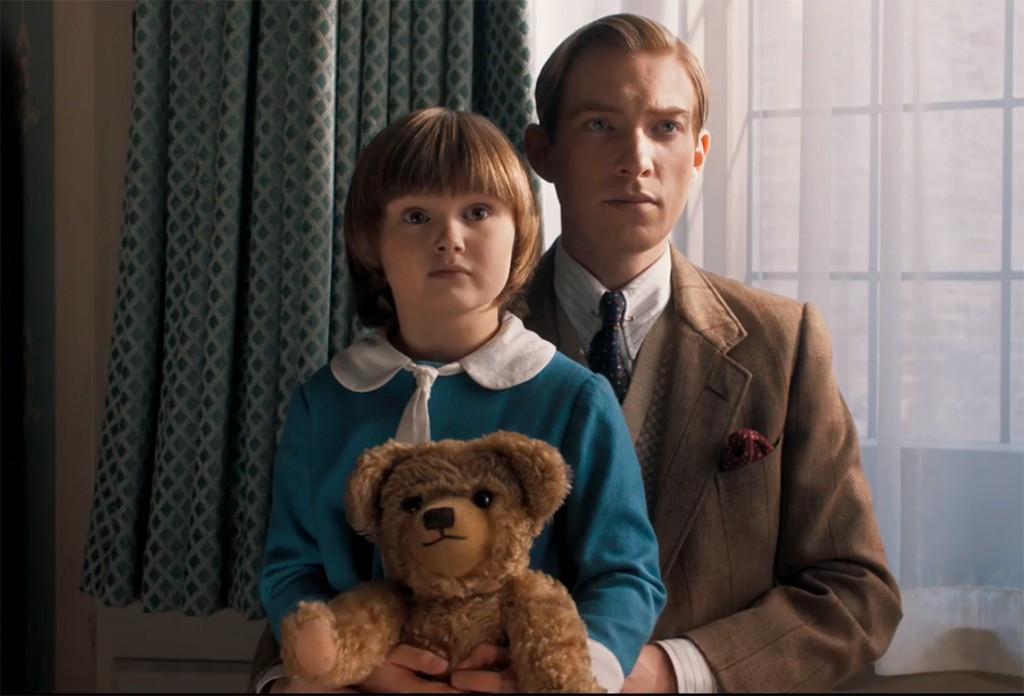 Sooner or later we all have to grow up and how successfully we achieve that state does depend on the experiences we have had and the people we have lived with or been influenced by during our childhood.

We all know these facts now, but in the aftermath of two terrible World Wars during the twentieth century, the still developing science surrounding children and childhood had been put on hold . It would only be revisited finally when post war society realised it had lost its smile. 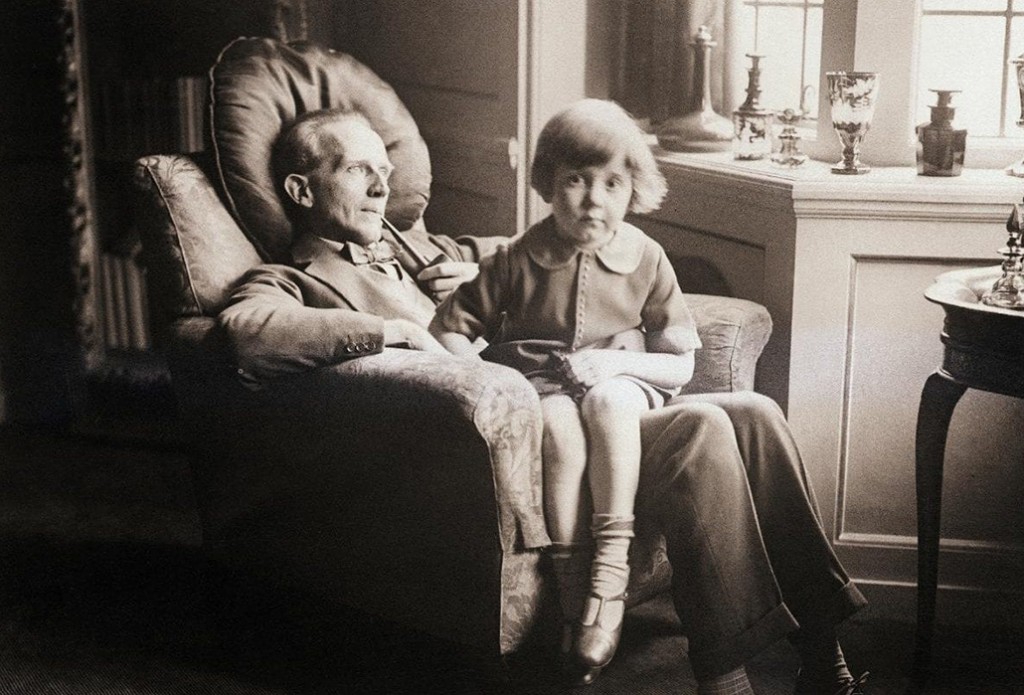 Historically real, the very young Christopher Robin Milne was one little boy who prayed to have a happy life.

Don’t read any more unless you can cope with spoilers. 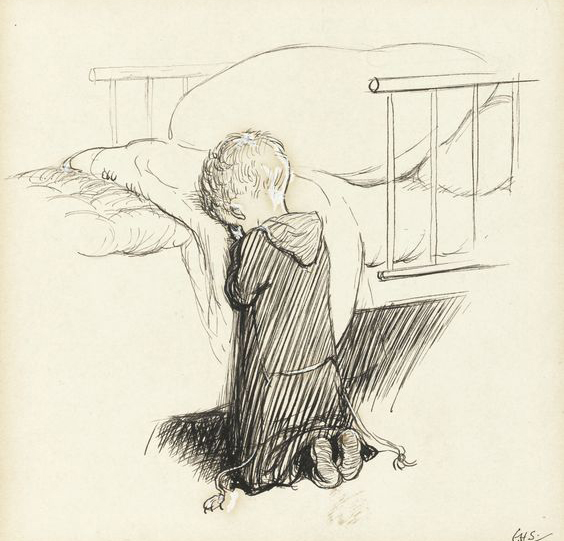 Little Boy kneels at the foot of the bed,
Droops on the little hands little gold head.
Hush! Hush! Whisper who dares!
Christopher Robin is saying his prayers.*

Bursting bashfully onto the sad scene in the publication “When We Were Very Young’ following World War I came A.A. Milne’s Mr Edward Bear in 1924. He popped up in a poem called Vespers, which told of A.A. Milne’s son Christopher Robin’s nightly prayers. It was sold to Vanity Fair by his mother, without his father knowing, and went on to become a huge hit.

The character Winnie-the-Pooh who predated Walt Disney’s Mickey Mouse (1928) by four years, was based on Edward Bear owned by his son. By 1926 he had met morphed into the lead character in a charming book of his own with a new name, Winnie-the-Pooh and if you see the movie you will find out why and how. 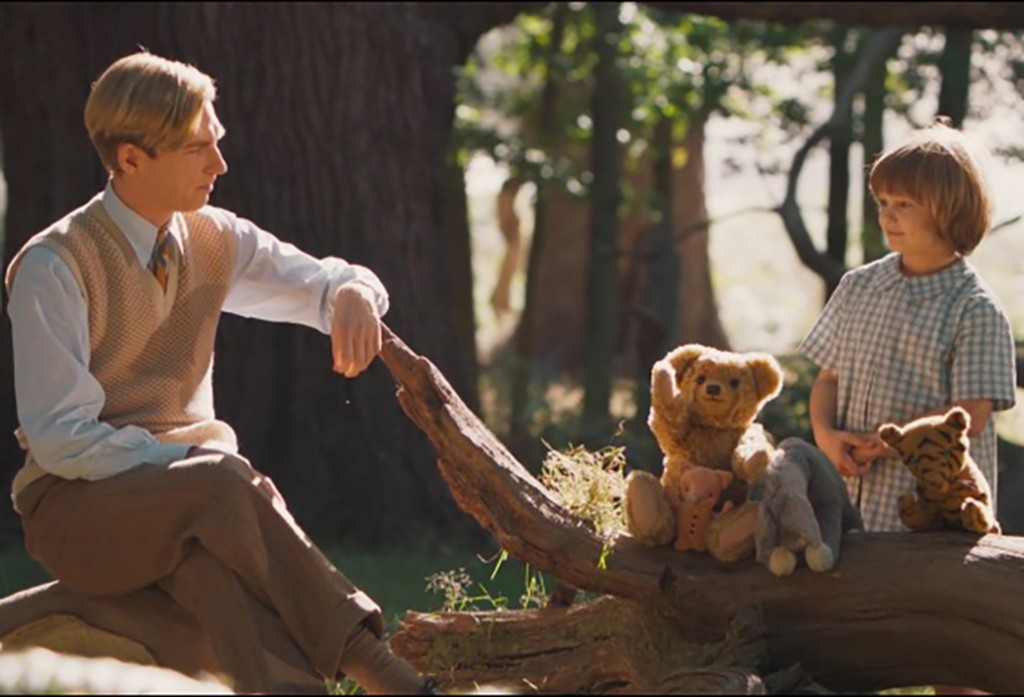 Christopher Robin’s father and the creator of Winnie-the-Pooh stories, imagined for his son a wondrous world of whimsical reality, which was based on his daily life with his toys one in which friendship, hugs and laughter were important.

The delight at how the story emerged ensured that ‘Pooh’ and his friends, Eeyore, Piglet, Tigger, Owl, Kanga Roo, Rabbit and Christopher Robin suddenly and very quickly became a huge hit. They were infused in children’s hearts all over the world following the captivating tale of the life they led together in a woodland paradise, becoming universally admired. 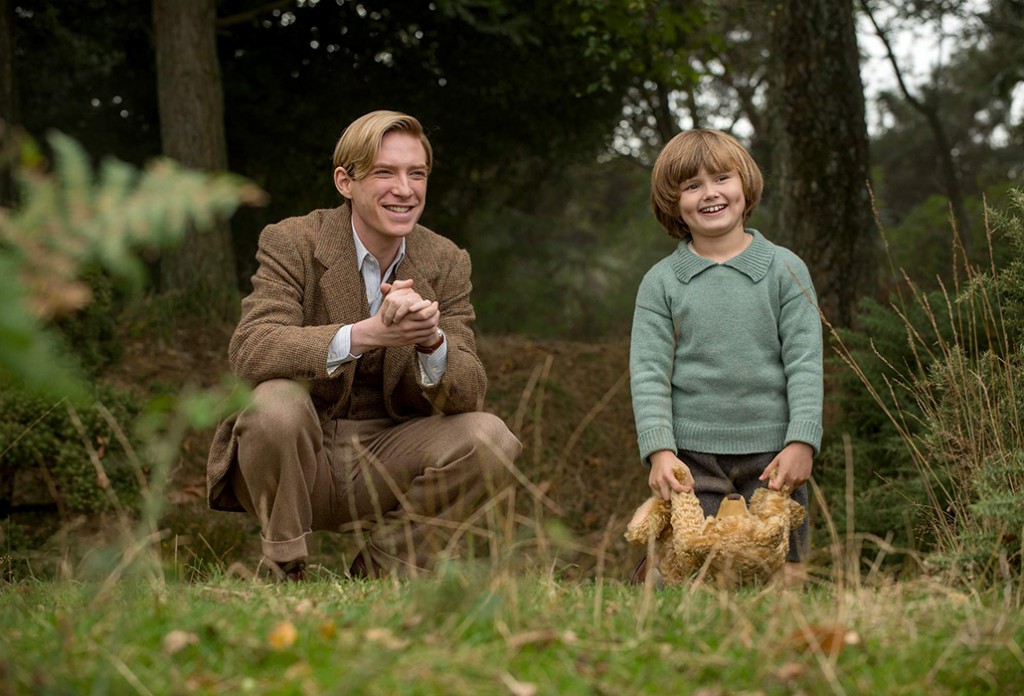 A talented poet Pooh frequently creates hums. He is a social animal entirely attached to his friend Christopher Robin and his closest pal of all; Piglet.

A. A. Milne like many of his counterparts, came home from WW I completely shell-shocked and with what we now know as post-traumatic-stress syndrome. At the time however, they were basically told to ‘pull themselves together and get on with it’, an attitude that prevailed until well after the Vietnam War in the 1970s here in Australia without the victims receiving support or help.

Milne had a very hard time picking up from where he left off as a successful London playwright in the gentle elegance of Edwardian England before the war. Constantly reliving the horrors he wanted to opt out of the busy world in London from time to time. 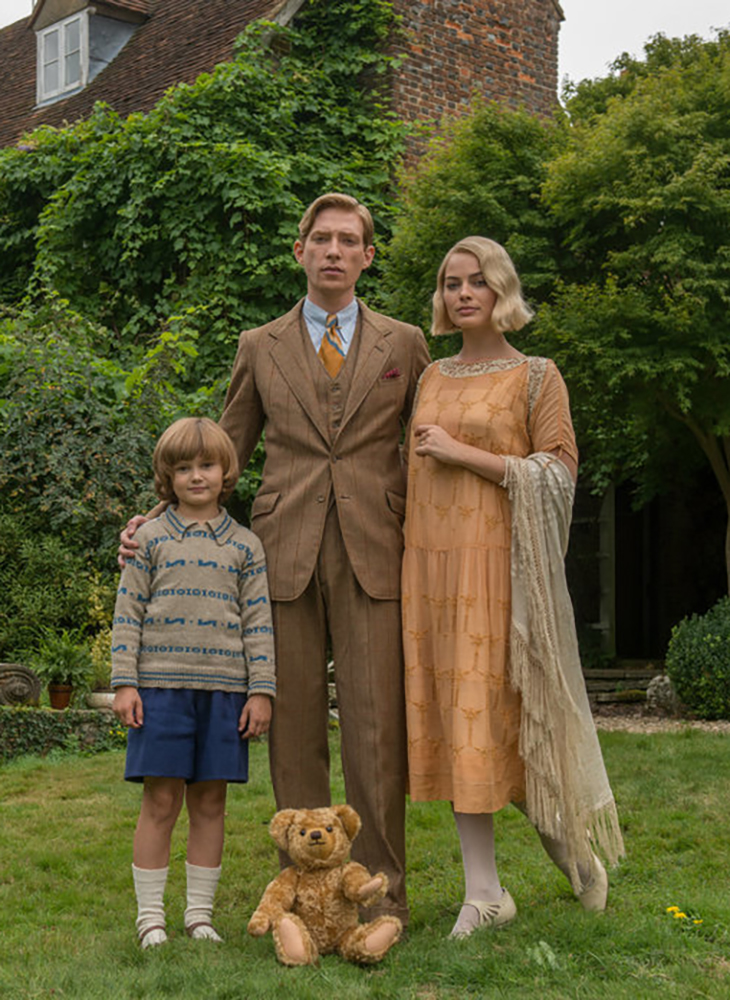 Decamping from the high life in London society to a glorious rural scene in Sussex, in a country holiday home Milne sought some sort of inner peace because like everyone else, he was trying to remember what happiness was really like.

For those young men as he was, mixing in certain kind of social circles meant that Nannies were the order of the day.

Sheltered entitled wives like Daphne also had no idea, much like their Victorian counterparts, where babies came from.

They were left horrified when ‘birth’ began and it was more than a rude shock to the system.

In order to achieve success, to get to the top and to become so beloved by the multitudes, someone it seems had to pay the price and in this case it would be Christopher Robin.

He was luckier than most; cared for by a loving, firm but kind Nanny, who explained how wonderful it was for other children when Winnie the Pooh came along bringing happiness and becoming a beacon of hope for children everywhere and their parents. 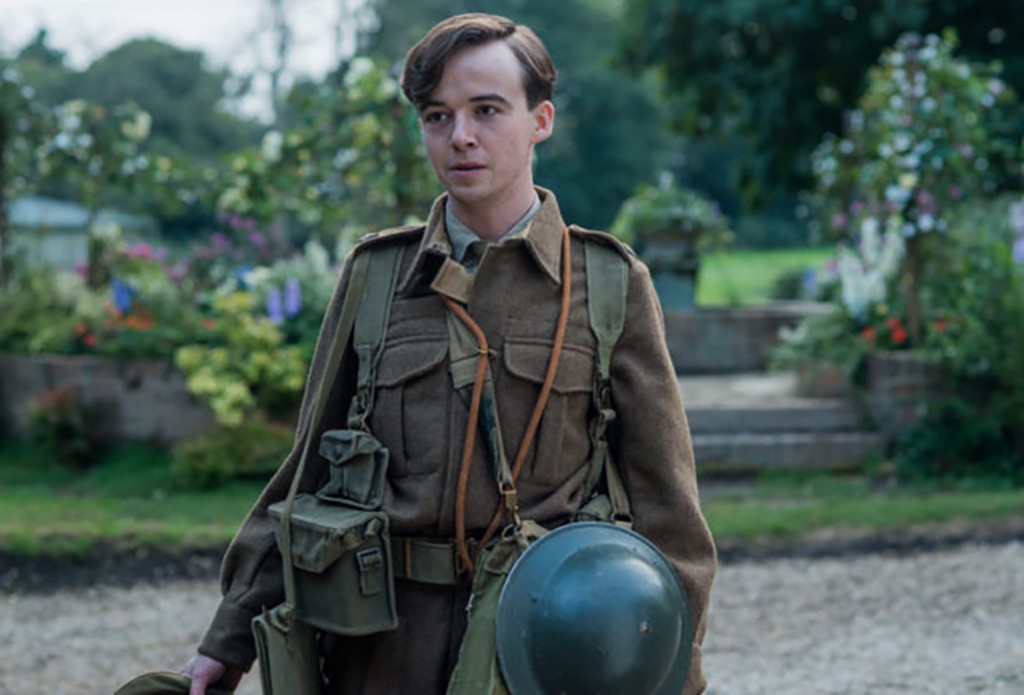 As the boy grew to adulthood bullied and bashed constantly by boys at boarding school he suffered a great deal. 18-year old Alex Lawther plays Christopher Robin as a sad, bitter lonely young man, who had to take up boxing at school just so he could learn to survive. 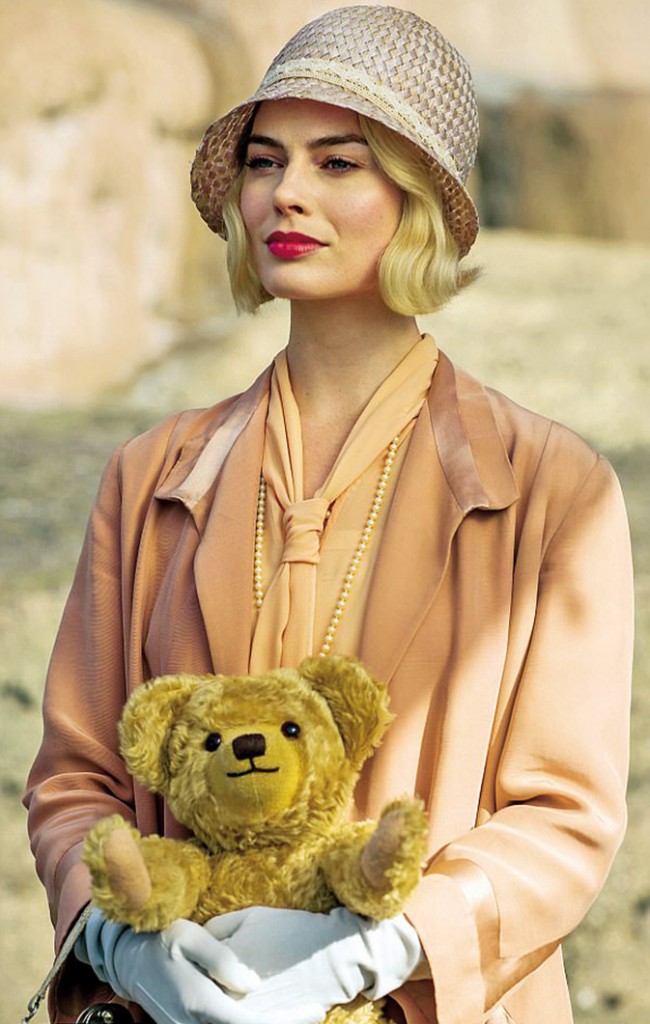 Daphne, Christopher Robin’s mother is a complicated woman with few redeeming features despite being glamorous. The positive thing she did for her son was encourage the love of his ‘animals’. She was self-indulgent, always striving to be part of the social scene no matter what the price for her family. She could be incredibly cruel to those she believed ‘inferior’, like the Nanny she employed for her son,

Constantly reminded his mother nearly died giving birth to him, no wonder Christopher Robin didn’t talk to her after his father died. Especially if she was anything like the harridan Margot Robbie convinces us she was. “I had a baby to cheer you up’ she screeches at her husband before storming off to London to party with friends, giving him some of the peace he had been longing for.

As it turns out his son’s Nanny Olive goes away at the same time to attend her dying mother. This opens up a chance for Alan Milne to have some one on one time with his son and finally forge some sort of relationship with the eight-year old boy he has never really connected with as life and circumstance throws them together. 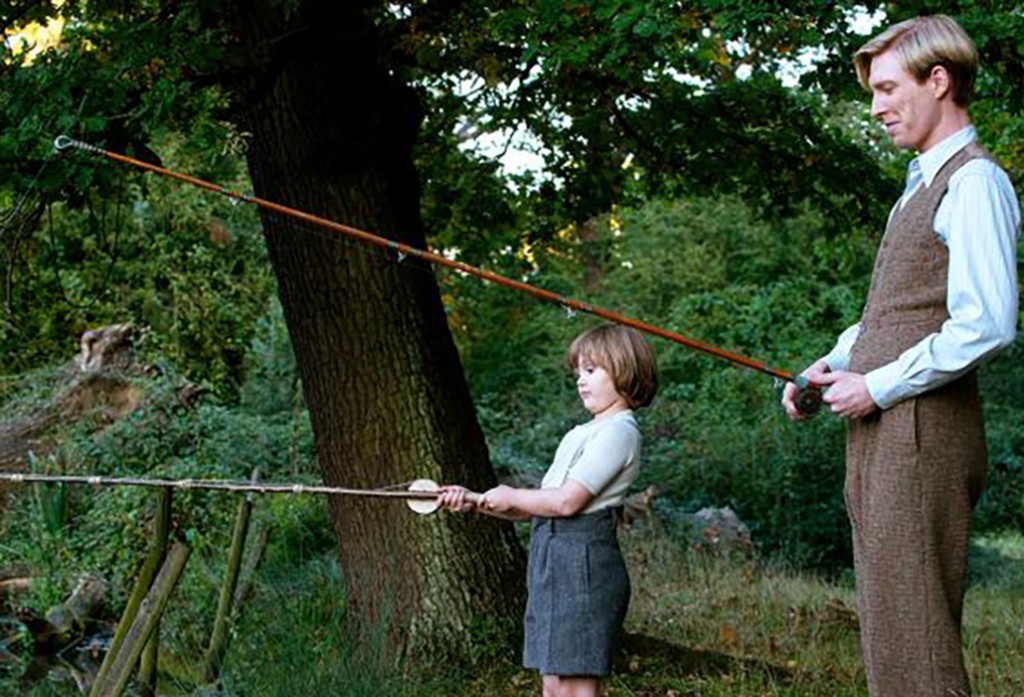 Left alone for the first time, Christopher Robin and his father form a bond of sorts, fishing and playing cricket, although affectionate touchy feely displays were certainly not on at the time. One had to keep that British upper lip, stiff.

Father and son were kept busy having adventures in the ‘woods’ like the one nearby to the family country house in Sussex where they walked every day.

The simplicity of the life the two both enjoyed and experienced together while going for their long walks in the woods is enviable.

Still dressed in girl’s smocks with short trousers by a mother who only wanted a girl, one day Christopher Robin’s father has a light bulb moment. He gives birth to the idea of writing a children’s book including verses of poetry that are today synonymous with the name of Christopher Robin. 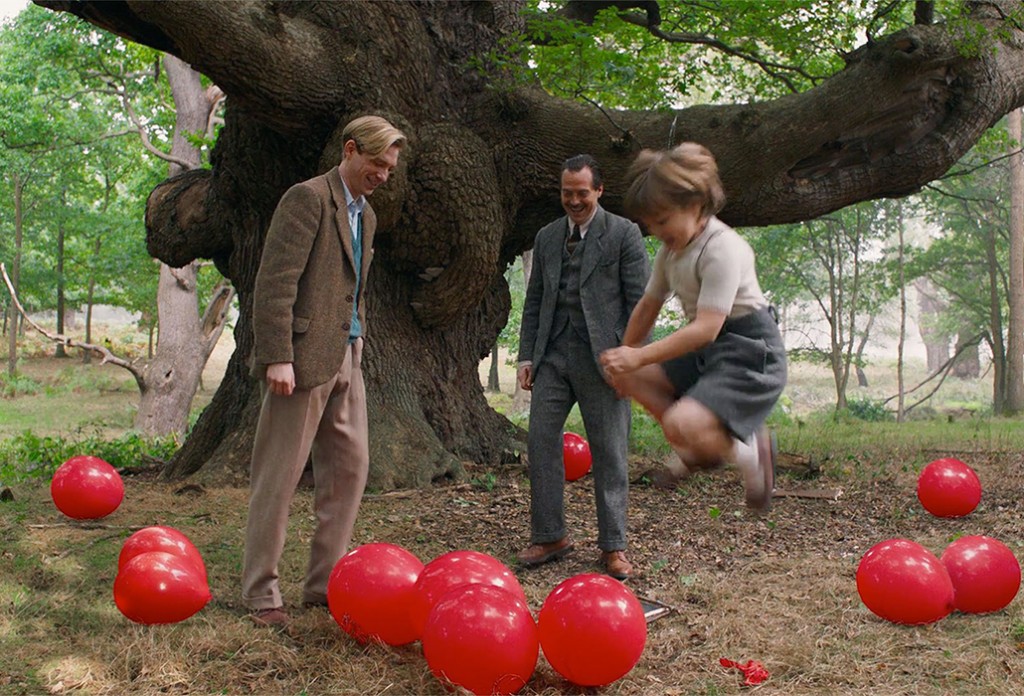 They became far more famous than all the plays and works Milne had written prior to and after ‘Pooh’ including his landmark publications Peace with Honour (1934) and War with Honour (1940s), much to the author’s chagrin.

What began as father and son discussing life together as you perhaps would with an eight-year-old child in terms of the make-believe world he lived in, their talks alarmingly end up growing and turning into something far bigger than them both; fame and fortune.

Summoning illustrator Ernest Howard Shepard (1879-1976) his friend from London played by Stephen Campbell Moore to come to Sussex and start drawing his son with his toys, they really had no idea how big ‘Winnie-the-Pooh’ would become and how it would change all their lives. 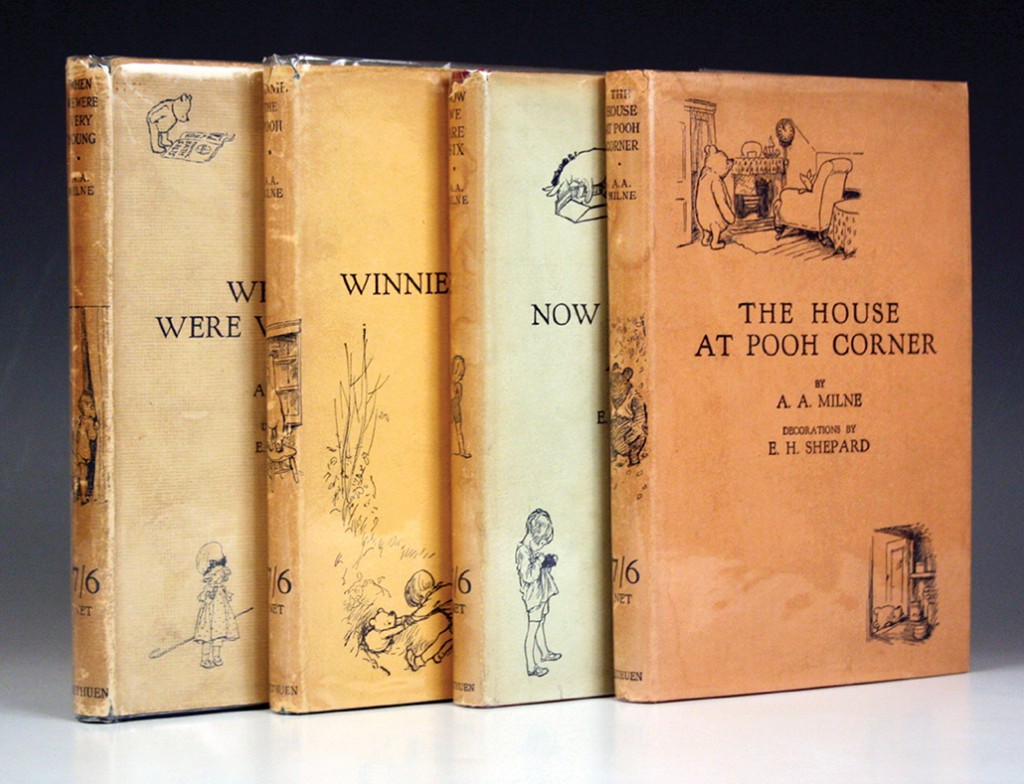 The movie tells how Milne’s phenomenal professional success becomes a complete personal failure. Within weeks of Winnie-the-Pooh being published and with the books flying off the shelves, the requests for interviews, public appearances and fan mail started pouring in as if floodgates had been opened and no one could shut them again.

The requests and demands were not for the author or the illustrator of the book as would have been usual, but for the real Christopher Robin who is eventually overwhelmed by the constancy and demands of all his personal engagements. 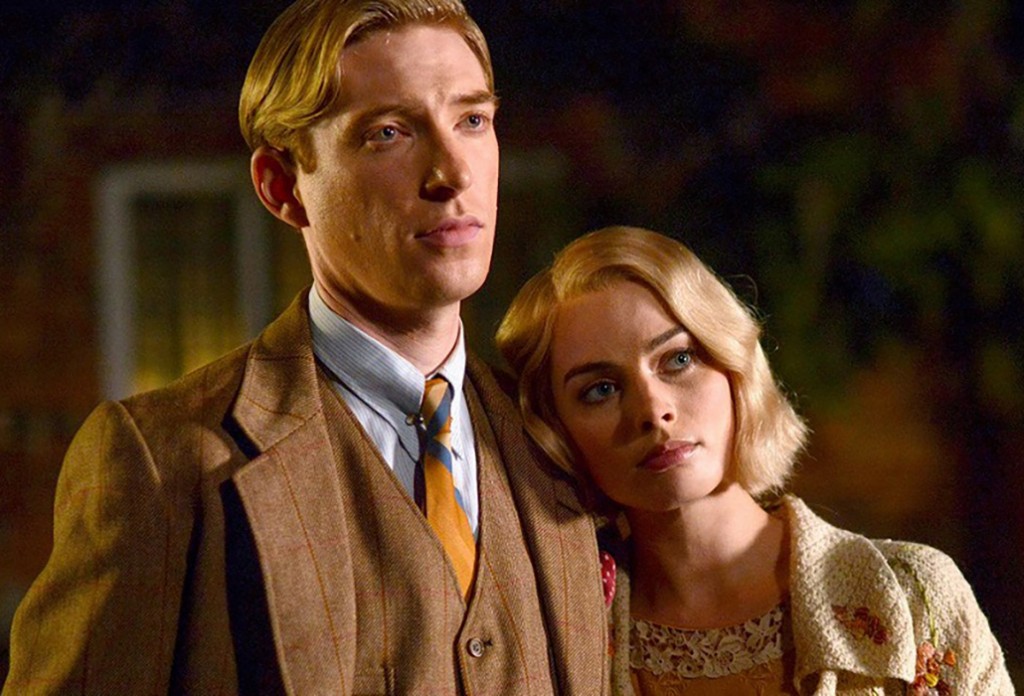 For many people, especially those under 40 today, some of the experiences they had would be hard to understand and difficult to relate to, although the movie does succeed well in pointing out the destructive role celebrity can really play in someone’s life.

The young adult Christopher Robin reminds his father that all he did was ask his Dad to write a story for him, not about him which caused so much harm. 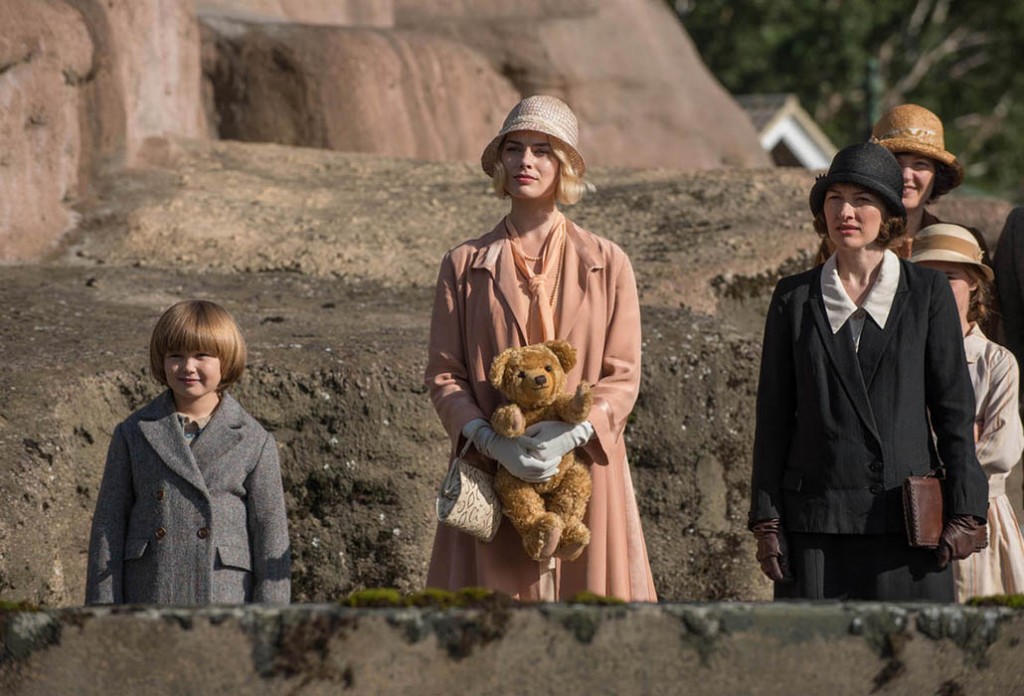 It is no surprise when we learn at the end that Nanny Olive and Christopher remained close friends for the rest of their natural lives.

The scene where Christopher Robin’s wonderful Nanny Olive, sensitively realised by Kelly Macdonald, tells her charge’s parents off for exploiting their only son before resigning her post, had many people including me cheering. 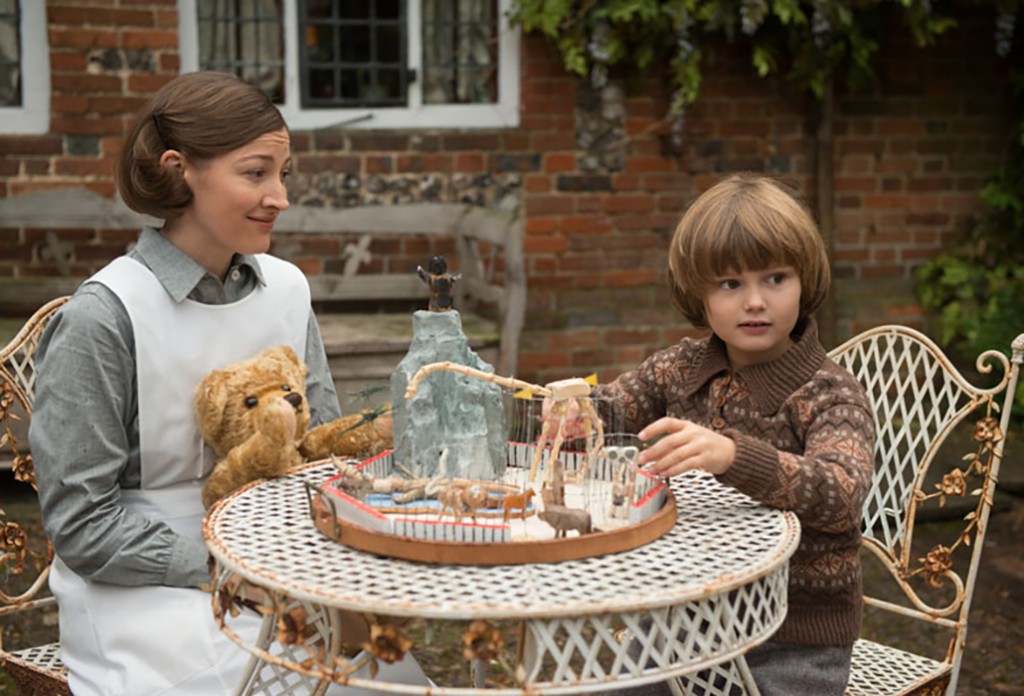 When the inevitable happens, and Word War II breaks out just as Christopher Robin is to leave his horrid secondary school, he’s knocked back from military service on health issues.

Begging his father to help him enlist, he just wants to go off to war and perhaps die, which would be the ultimate punishment for what he believes are his uncaring parents, especially his mother.

Missing in action, presumed dead, his father apologises to him the night he walks back into their lives, having bucked the odds and had an epiphany like experience that has him seeing the world and Winne-the Pooh differently through adult eyes.

We learn how humbled he was when the men around him in the trenches as they were being bombed started reciting one of ‘Poohs hums’, giving them both hope and inspiring them to stay alive. 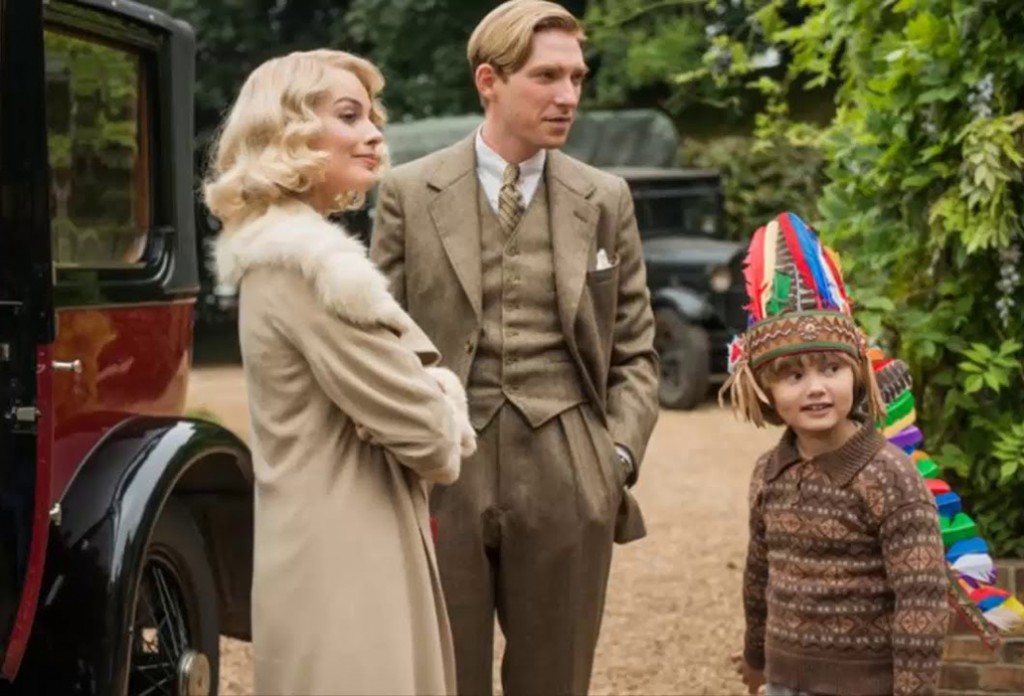 You gave me Christopher Robin, and then
You breathed life in Pooh.
Whatever of each is left my pen
Goes homing back to you.
My book is ready, and comes to greet
The mother it longs to see —
It would be my present to you, my sweet,
If it weren’t a gift to me.# 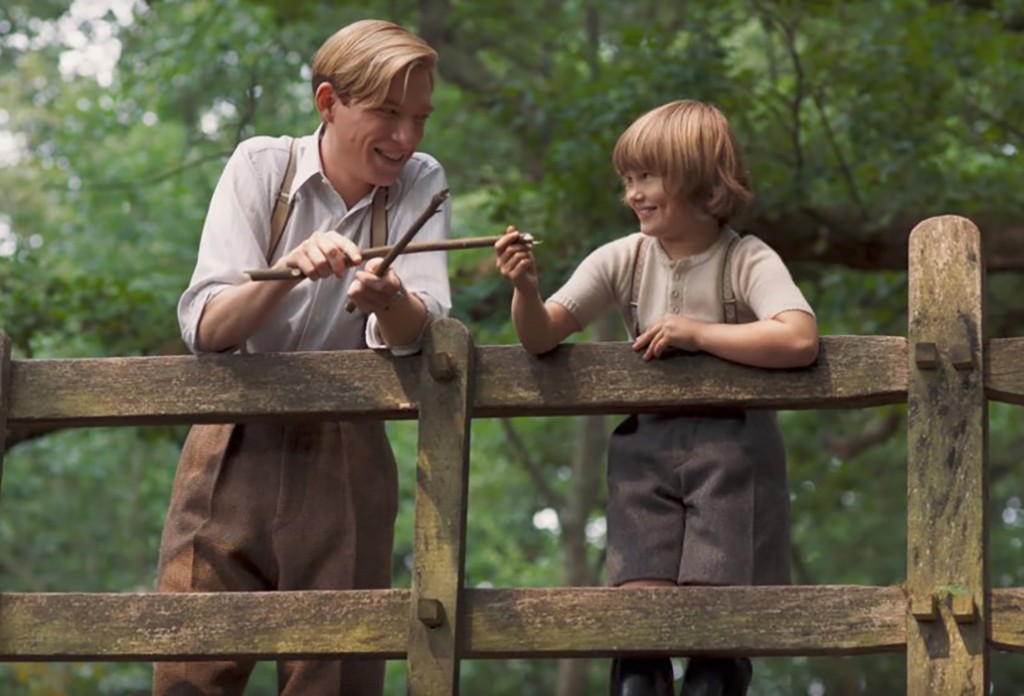 I loved this film because it didn’t sugar coat the realities of life at the time or trivialise the attitudes of society. It is a ‘real’ story, well told.

*Poetry: When We Were Very Young