Grace Kelly, Actress, Princess and Style Icon. The world was entranced when she went from Hollywood star to fairytale Princess.

Last week The Culture Concept Circle team were able to travel to Bendigo to view a retrospective of  the Princesses wardrobe.

Held in the Bendigo Art Gallery the Grace Kelly Style Icon exhibition was a highly anticipated show that was a sell out! This city, 2 hours by train from the heart of Melbourne, has so much charm I think that Grace Kelly would have been quite happy to know it was playing host to a snapshot into her world of  apparel.

I don’t think I know a single person who isn’t a Grace Kelly fan, her cool sophistication and classic style was loved by all. I was fascinated to see dimensions. What were her proportions? Her height? Quite often actors are much smaller in stature than we see on the silver screen and this was true of this gorgeous woman.

First, the dress she wore in 1955 to collect her Oscar for “The Country Girl”. This dress is beautiful in photos, but truly sublime in the flesh. What many might not know it has a matching jacket of the same fabric and colour.

The gown itself, viewed from the side, is tiny. Wisplike in dimension but so beautiful in cut and fabric (See FE top 10 oscar dresses). What was interesting was to see the transition from one decade to the next.

Fabrics and colours changed, but the Princess always favoured a simple silhouette. She knew the more straight forward the shape that the emphasis would be on her beauty. A stickler for deportment, she always insisted on wearing white gloves, and there were some lovely examples on show. 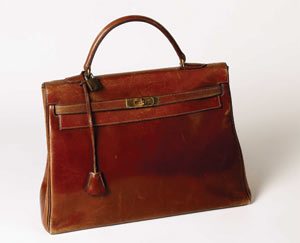 Her engagement outfit, including the Hermes “Kelly” bag were another highlight.  It was so interesting to hear the comments of the crowd when viewing “the” bag.

Many seemed disappointed with this timeless piece worth thousands of dollars. We must remember in the 1950’s it wasn’t available in the myriad of colours and skins it is now.

In demure tan leather I suppose it looked a little dowdy to some. I was picturing it being held by her, a classic beauty with a classic bag, class all the way!

The wedding dress was a major highlight, a replica as the original is to delicate to travel, it transcends expectation. Dress for the Civil Ceremony of her Wedding

Designed by Helen Rose, who had worked with Grace on movies “The Swan” and “High Society”, this was so much more beautiful to behold in reality. I feel so many of the photographs of Grace do not do her couture justice.

The wedding gown, as with, I think all the other clothes needed to be seen on the Princess

As with many simple styles they come to life on the wearer, and sometimes lack that wow factor on a mannequin.

She had her favourite designers as I imagine most of us do, even if we can’t afford the Chanel suit or Balenciaga gown, that was part of her wardrobe, we can dream. 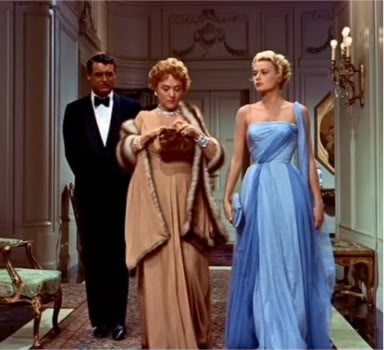 How amazing to be dressed by Dior, YSL, Madame Gres and Givenchy.

Another of her favourites was Oleg Cassini, whom she was engaged to until her parents disproved of her marrying a divorced catholic.

One of my favourite gowns was a purple satin Balenciaga, such an amazing cut and colour, it would have looked magnificent on. 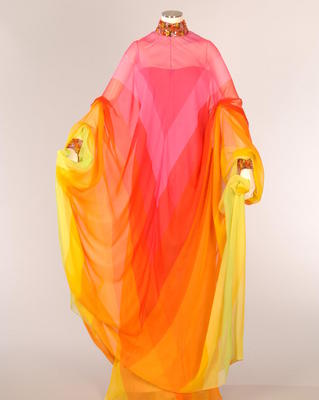 I pointed out to a few of the naysayers to look at the date the garment was from. Colours, prints and shapes define decades, and this was true of these examples. She always stuck to divine fabrics, and followed the influences of her favourite designers.

In her later years, it seemed she favoured a kaftan style in many of her looks, and she seemed to embrace colour, which I think is so flattering as we start to get a little older. There were also three costumes that Grace wore to Balls in Monaco.

I wonder if they made her feel like a movie star in character, and did she miss her old life?

We all love the fairytale that seemed to be Grace Kelly’s life (a little like Catherine Middleton today), but imagine what might have been had she kept acting.

Think of those costumes coming from the genius of Helen Rose and Edith Head dressing the cool beauty that was Grace Kelly. We will never know, but how lucky are we to be able to stand in awe of these fabulous frocks. Thank goodness they were treated with the care and respect that they deserve.

It was known that Her Serene Highness was very sentimental about clothes. I am sure she would have been overjoyed that so many people around the world are, because of this exhibition, as enamoured with her choices as she was.

I feel privileged to have been so close to a legend and not have been disappointed.

From ancient Greek vases to photographs and major oils on canvas with saddles, sculptures, riding gear and a Melbourne Cup the NGV explores the horse in history