From indoors to outdoors and from upstairs to down, if you wanted something special for your corporate headquarters, period house in town, country estate, colonial cottage, or modern minimalist apartment, for over the past forty years in Australia, you would always be sure to find it at antiquarian and antique collector and dealer Graham Geddes eclectic emporium on the High Street at Armadale in Melbourne, Victoria. An auction sale of 1,836 items, on the weekend of the 15th and 16th September conducted by Leonard Joel, will go a long way towards bringing an amazing chapter in design and decorative arts history in Australia to an end. It is impossible to pinpoint any one era of social and cultural development that Graham has preferred over others, suffice to say that you will be sure to find the best of his art and antiques on sale this weekend. So get online at Leonard Joel and view the catalogue and then you can bid in person or on the phone. It’s all happening and it’s your last chance to get in on the action.

Sometimes controversial, always at the cutting edge, Geddes is downsizing dramatically having attained 80 years. His constant travels over the years have led to Geddes adapting quickly to changes in trends and fashionable concerns. The range of his collection available to everyone, especially interior designers, architects and landscape gardeners, has been intelligent and outstanding. It has been gleaned from all the classic periods in world history, coming from locations far and wide. The 17th – 19th centuries have been a particular focus. Graham’s pursuit and passion of the visual arts has certainly known no boundaries. He has grown both the range of goods on offer and the real estate to house it on the High Street into a showcase that has certainly been unique in Australia, due to its sheer diversity and size. It encompassed nearly a whole city block!

It has been a treasure trove, a real Alladin’s Cave, where for years connoisseurs have salivated and collector’s have gone into a flat spin. Graham Geddes has an academic knowledge, having studied the Fine Arts and Classical Civilisations in his university days. As an educational resource of sheer wonder, his collection has no equals. From China, to India and on to Europe, his relentless pursuit of wonderful things has meant that his clients have benefited enormously and gained great enjoyment from the objects of their choice, like this French patinated Bronze and Gilt Mirror from the early nineteenth century. It is a delightful object that represents in its design a panoply of history. Tres chic!

Mirrors have occupied a unique place in the imagination of humans for as long as recorded history. They have been described as the ‘matrix of the symbolic’, accompanying the human quest to know and understand our identity. Many myths, legends and superstitions are associated with the mirror and in all cultures they are associated with truth.

Lot 75 is cast as a floral wreath, the frame has applied musical trophies and is surmounted by a ribbon crest. Perhaps your perchance is for textiles, particularly tapestries, which are an interest for many. Lot 487 the woven tapestry of ‘The Interpretation of the Victim after the Antique Decius Mus Cycle’ from the 17th century in the auction sale is truly wonderful. Wouldn’t mind having it on my wall.

The ‘Decius Mus’ cycle of tapestries was produced from eight designs produced from original cartoons by Peter Paul Rubens (1577-1640), although by other manufactories. They were produced with varying completeness and distinctive border decoration.

This splendid piece was woven in wool and silk and tells a story according to ‘Livy’ a Roman historian who wrote about Rome and the Roman people, about  the Roman Consuls Decius Mus and Titus Manilus preparing for battle against the Latins in 340BC.

Both leaders it seems dreamed that victory would belong to the side that lost one of its generals. Decius Mus is describing the dream to his troops in which ultimately his death would be the one that would prevail. 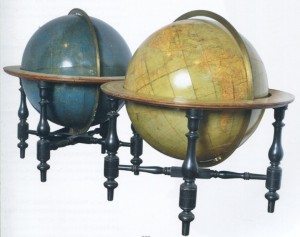 If you have an interest in things terrestrial and celestial then you would need to look no further than Lot 720. Two 18 inch globes one showing off the heavens, the other the earth and both by W. & A.K. Johnson, circa 1887.

They are indeed delightful objects and a piece of history in the making at a time when an expansion of knowledge about our own planet and the universe was in full flight.

It was when the three laws of motion as put forward by Sir Isaac Albert Newton (1642-1727) one of the most influential people ever in the world, were being re-visited and questioned by scientists of a new age. If you want an example say of a wonderful piece of marquetry, a splendid piece of painted furniture, or a stylish number made from beautifully veneered timbers then there are some amazing pieces to choose from that are both beautiful to look at and useful.

The mid 19th century neo-Gothic designed mahogany breakfront library bookcase was made by a master craftsman. Lot 270 also has a distinct provenance, that of an association with the marvellous English eccentric Horace Walpole, (son of England’s 1st Prime Minister).

Walpole built a unique villa ‘Strawberry Hill‘ during the mid 18th century in the neo Gothic style on the banks of the River Thames at Twickenham, because he wanted to imprint ‘the gloomth of abbeys and cathedrals’ on his own.

The architecture of the medieval period especially appealed to Horry’s nature and this bookcase is particularly fine, with its delightful Gothic arch tracery and a pierced brass grill to the lower section.

Housing books behind glass was always important to collectors because it protected them from their mortal enemy, dust.

One would be tempted only to put a piece of furniture of this size in a large room, but that would be limiting. I had a small room with high ceilings once that I put a bookcase of this size into and it looked simply amazing and the people who visited all certainly enjoyed the aesthetic. 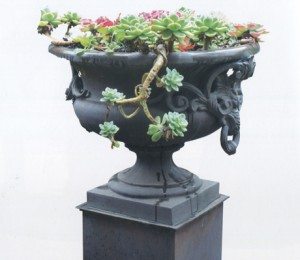 The range of fabulous fountains, sensational sculptures and monumental urns on pedestals available, to be used by architects and designers, who pride themselves on being innovative or having a fruitful imagination, is indeed astonishing. They are made of many different materials, including sandstone, cast iron, bronze, terracotta and marble.

There are figures from the tales of classical mythology and hero’s and heroines that have shaped our world.

From Cupid to Apollo from Minerva to Leda and the Swan you will find a subject to illustrate your story.

Urns, such as Lot 1330, which is one of a pair made of cast bronze, are really quite breathtaking.

Lot 510 is two Italian painted terracotta allegorical figures, one representing the season of Autumn, the other Spring.

They are modeled on examples of Goddesses from antiquity wearing classical attire. One is holding a posy of flowers that bloom in the spring while the other is holding a bunch of grapes representing their harvest in the autumn.

The goddess with the Spring flowers follows the form of the Goddess of youth in Greek Mythology, Hebe, who was originally a cupbearer for the gods and goddesses of Mount Olympus serving nectar and ambrosia. The clinging nature of the garment they are both wearing was one Empress Josephine in France and the ladies of her court emulated during the Empirical reign of Napoleon 1, by dressing in a cloud of diaphanous white mousseline.

Lot 1580 is from the other end of the spectrum altogether from our pagan Goddesses it is a period stone figure of a preaching Buddha, or ‘awakened one’ from the 5th century.

It is profoundly beautiful, despite it having lost its head and some of its toes at sometime on its incredible journey.

It showcases the skill of the artisan who created it off to perfection and would look truly amazing in any setting, especially one that is minimalist. All it requires is someone with design initiative and flair to display it sensitively.

If you need a one off piece of seat furniture that you can use to inspire your own journey, don’t go past Lot 415. This is a splendid 18th century Venetian Giltwood number, which is reputedly formerly the property of legendary actor Laurence (Larry) Baron Olivier (1907 – 1989).

In the rococo taste, it has curvaceous cabriole legs, scroll arms and is upholstered in leather. It has been around for over 200 years and should last at least 200 more.

I could wax lyrically on and on about this unique auction, which will be held in Leonard Joel’s South Yarra Auction Rooms.

It is without doubt a unique opportunity for people from all walks of life and all backgrounds to secure something wonderful.

Go well Graham, there are many people out there who will miss you and your indomitable style. With special thanks to Leonard Joel’s Sydney Agent, Martyn Cook

Master and Pupil, a concert featuring young Australian actor James Fraser with principals of The Marais Project, on May 29, 2016 Independent Theatre, Nth Sydney