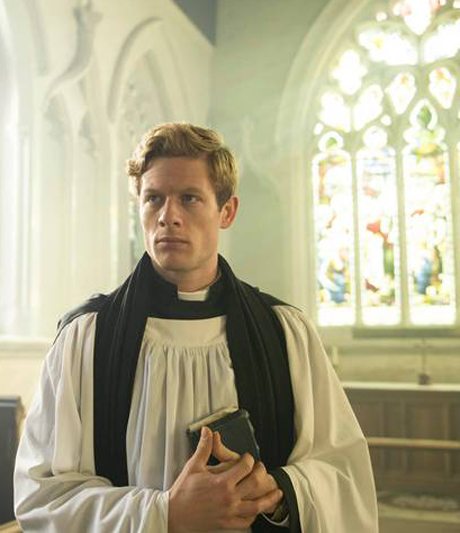 Goodness, or arete was an intrinsic excellence thought to have existed in all things in ancient times. A good man was meant to be ‘truly noble in hands and feet and mind, fashioned four square without blemish’.

The vicar of Grantchester in the English countryside certainly fits the bill.

He is a not a perfect man, far from it. Just one striving to achieve a balance in life, in love and in his personal and professional life in an imperfect world.

Formerly playing Lady Chatterley’s Lover and Henry Alveston in Death Comes to Pemberley, British actor James Norton certainly captured my attention playing the psychotic kidnapper Tommy Lee Royce in the brilliant drama series Happy Valley (2014) on ABC TV. He is the star turn in Grantchester, an all new six part television series about a good sleuthing man of the cloth. A Lovely Day/Masterpiece co-production distributed through iTV and on ABC in Australia, Grantchester looks wonderful, feels great and could become compulsive viewing if the first few episodes are a guide.

The Reverend Sidney Chambers is certainly the hottest looking vicar in town.

Posted to Grantchester a real village nearby to Cambridge in the countryside of England, Sidney has an extraordinary charisma, of which he seems completely unaware.

They both captivate and fascinate as a pair of unlikely best friends.

The insightful Rev. Sidney Chambers however is struggling like everyone else on a daily basis. A former Scottish Guard who suffered much during World War II, Sidney while playing detective, is in pursuit of pathos that inner universe to which a man is drawn attracted by the very nature of his own complexities and contradictions.

Sidney seeks to temper his life with the maxim of ‘nothing in excess’. He does not however always succeed.

James Norton in his incarnation of Sidney certainly has that ‘I am slightly unattainable’ look down pat.

He dreams away lonely hours listening to jazz and soaks and lingers far too long in bathtubs. He also has to overcome feelings of jealousy, while tempering his ambition or drinking far too much.

“Do you think we have a problem with alcohol” asks Sidney – ‘Absolutely, answers Geordie, “we don’t have any” and heads for the bar.

If nothing else hooks you in this comment in its context should.

It’s at the pub that they sort out stuff, while Sidney moonlights as Geordie’s assistant solving mysteries.

He regularly bicycles from Grantchester to Cambridge and back again wearing mufti, all the while endeavouring to lead a decent life.

He is pining for the lost love of his life Amanda (Morven Christie) whose father has arranged for her to marry someone else with social standing, not a humble vicar.

Shamefully he professes interest in the gentle Hildegard Staunton (Pheline Roggan), seeking to make his true love jealous. He succeeds, drawing far too much satisfaction to himself when it happens, an encounter sure to have consequences soon. Having just watched Episode 4 of a six part series and more than half way through, it is not surprising a second series has been commissioned. The difficulty for any priest of the Church of England during the 50’s was that like they perceive Christ himself to be, the people in their parishes had an expectation they would be perfect men.

Jesus however was imperfect and because of his extensive knowledge about his subject, Sidney struggles to reveal the essence of Christ’s message about faith, forgiveness and love to his flock.

When he does he achieves it with a naturalness of style that is appealing.

The screenplays are based on the novels of James Runcie, undoubtedly inspired by his own experiences of enjoying an upbringing in the church by a former Archbishop of Canterbury father.

It is good to see angler and actor Robson Green back on our screens as Geordie Keating.

As the world-weary policeman this is another series that offers him an opportunity to expand his fan base with his considerable and very fine skills as an actor.

Robson’s got that whole ‘walk on water’ thing going on. It’s great casting – the pairing of an extreme fisherman with a vicar – a bromance we can admire as they share the loaves, fish and blessings around.

Sidney’s housekeeper Mrs. Maguire (Tessa Peake-Jones) is an extreme challenge for her vicar on a daily basis.

A bitter unhappy woman, she is prone to gossip like many in a small village.

She lost her true love to the war and bosses Sidney around like a son.

He is waiting patiently for her to win back her smile, while met morphing back into the kind woman he knows her to be deep down.

To us watching him work so hard to assist all those in his flock and personal circle of acquaintances and friends he’s in many ways a puzzle too. 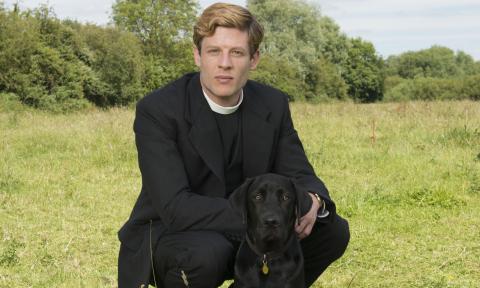 What is it that he has or knows that we don’t… can it truly just be faith?

Does it really have the power to transform lives?

What is it that happened to him during the war he keeps dreaming about in flashback?

Sidney and Geordie, accompanied by Dickens his dog, often play backgammon together as well as spend an inordinate amount of time drinking ale together in country pubs.

His giant theologically challenged brain and intuitive nature in regard to people are a huge plus for his detective friend, who values his advice when the chips are down.

Geordie is struggling on a copper’s salary to keep his growing family and to protect his gentle wife Catherine (Kacey Ainsworth), keeping her and their children safe. The difficult task the Rev Sidney Chambers faces is solving the mysteries that beleaguer him. They generally happen while he is busy not judging everyone else.

For a Church of England vicar Sidney’s attitude to life in general is not only tolerant but also remarkably unusual for his time. He does not seem to consider issues of prejudice, race or culture when encountering people from all walks of life and all backgrounds. 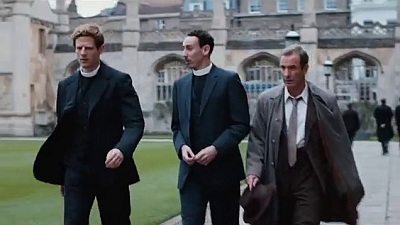 For him, people are just people with their own myriad of personal imperfections and he accepts people for who they are warts and all without judgment. A rare quality.

As we get to know him we also discover that Sidney is disgusted by the way people who are different are treated by society in general.

He believes in people’s right to privacy and has nothing at all against homosexuals as friends.

It’s no surprise when he takes one on as his curate; a poignant portrait of a kind repressed man by Al Weaver.

Sidney is perhaps hardest on himself mea culpa. He is modern and tolerant, way beyond what most vicars of his time would have been. His attitude will create even more challenges for Sidney to surmount as the series progresses into the swinging sixties and seventies. The 50’s were generally not enlightened times. Catholics and Church of England children cat-called at each other across the road . There was a strict order of society and it was extremely hard to ‘buck the system’ without becoming a total social outcast.

You had to grow a thick skin just to survive.

For any vicar this would create a problem in endeavouring to do his job.  They learned to keep secrets, to counsel wisely and to offer forgiveness for sins no matter how distressing or terrible they were.

They were very adept at preaching the moral dimension, while also reflecting their own ‘real life’ as a role model. As we know today some failed, revealing their flawed humanity. If you haven’t caught Grantchester yet, you are missing a real treat. It’s really good and after all, perhaps you may become convinced we really all need to be saved by such a handsome self sacrificing man of the cloth – well there is no mystery there… I am a weak woman after all!

Seems I have found myself another show to stay in for, a 4 out of 5 by the end of Series 1. Australian Brandenburg Orchestra is busy raising the aesthetics of their performance excellence by wearing new costumes designed especially for their players by Australian fashion design icons M.J. Bale for the guys, and Carla Zampatti for the girls. Melissa Farrow Principal flute recently showed off Zampatti’s latest sophisticated classic dress, which…