A temporary architectural pavilion made entirely from bamboo, the so-called ‘green steel’ of the 21st century, will be on display June 24 – December 10, 2016 at the Sherman Contemporary Art Foundation (SCAF) in historic Paddington in Sydney, Australia.

The official opening to be held on Thursday July 7 and Dr Gene Sherman, Executive Director of SCAF commented recently: “The structure has been created this year by one of the world’s ‘edgiest architects’.

He is Vietnam’s Vo Trong Nghia who has a passion for raising awareness of bamboo’s strength and viability as a building material and its enduring qualities.

Fugitive Structures was the first series in Australia to explore the potential of temporary pavilions as tools for experimentation and for testing new concepts and Vo Trong Nghia is known for developing sustainable architectural designs using traditional and innovative methods.

He once created a small bamboo forest on the roof of a gallery in Tokyo and revels in showcasing traditional Vietnamese construction methods and materials by showcasing the structural possibilities of bamboo. The significance attached to bamboo, one of the most important of all components in gardens of the east has a long history. Vo Trong Nghia Architects ‘bringing nature back to the city’.

The west has been slow to both appreciate bamboo’s beauty and its incredible properties, which have been recognized by many eastern cultures including Vietnam for centuries.

Planted purposefully in Chinese gardens in particular, bamboo is a vigorous long-lived plant whose branches can be put to a multiplicity of uses, making everything from buildings to furniture, from eating implements like chopsticks to a scholars calligraphy brush, utensils and clothing and it has also been used for weaponry.

It provides food for humans and animals. For us sticky rice is steamed in it, young shoots are good to eat while the giant pandas of China and the mountain gorillas in Africa, feed on its growth.

“The design of this final SCAF pavilion centres around two central pillars of Vo Trong Nghia’s approach to architecture: the innovative use of bamboo, and his passion, and self imposed duty, to green the world’s urban landscapes with plants and vegetation” said Dr Sherman.

The award-winning architect will be in Sydney to present a talk at SCAF during the opening week. He is sure to share his philosophy of work practice where 2 hours of daily meditation as well as frequent silent meditation retreats for his team of architects, engineers and staff are mandatory.

Born himself in a house without electricity, Vo Trong Nghia‘s aim is to deliver green spaces to those who live their lives in urban concrete jungles. His company is based in Hanoi and Ho Chi Minh City where the population has reached 10 million and where the green space merely equates to 0.25%.

‘Greening the city by architecture’, Vo Trong Nghia’s award winning projects have to date included a ‘Kindergarten Farm’ for children of factory workers, the ‘House of Trees’ within the most densely populated area of Ho Chi Minh City, and an unbelievably beautiful tree covered university campus.

Bamboo furniture became popular on the domestic market in the west during the early part of the nineteenth century when it was much sought after by King George IV when he was Prince Regent of England and his architect was fitting out the Brighton pavilion.

Throughout the nineteenth century it became the ‘rage’ among the aristocracy first, filtering down to the middle classes with the onset of the industrial revolution, with manufacturers being able to employ it to obtain economy in their material costs. But Bamboo has proved to be so much more. This flowering perennial evergreen thrives in diverse climates from cold mountains to hot tropical regions. Vo Trong Nghia Wins: The Dailai Bamboo Complex, consisting of the 2009 Bamboo Wing and the 2012 Dailai Conference Hall, was selected out of 276 entries to win Building of the Year Award, one of the most prestigious prizes in Asian architecture.

It is one of the fastest growing plants in the world and its tensile strength rivals steel, with a far higher compressive strength than wood, brick or concrete. 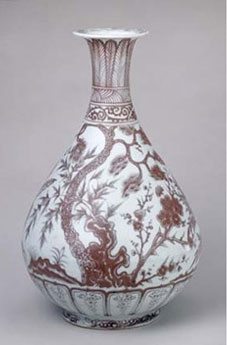 One could say that a garden historically is a microcosm of the macrocosm, a small complete expression of the vastness of nature. It has been conceived for centuries as a place to ‘refresh the heart’ by communing with nature.

There is a classic Chinese story of three bamboos encapsulating the vicissitudes of life where, although the strong winds of difficulty and devastation may lay the bamboo very low, it never breaks.

The Three Friends, the pine, prunus and bamboo, formed a trilogy that has long time classical associations, with the bamboo representing integrity and perseverance and it was a favoured scene on Chinese porcelain for centuries.

Northern Vietnam was incorporated into the empire of the Chinese Han dynasty where it remained for a thousand years after 111 BC and so the influence of the Chinese garden on its cultural development is strong.

The Chinese garden was about engaging the intellect, as it expressed a profound and serious view of the world and man’s place within it. It blended together many parts or elements of the same kind to create a remarkably integrated concept, a place where all the arts come together.

It was assumed for centuries the visitor would come to view bamboo with an educated mind and eye; a painter to design and appreciate it; a poet to immortalize it; and a calligrapher to record its qualities. In 2012 Vo Trong Nghia was named Architect of the Year in Vietnam. He designed the Vietnamese pavilion for the World Expo in both Shanghai (2010) and Milan (2015) and he was invited to participate in the Chicago Architecture Biennial (October 2015 – January 2016) and constructed a pavilion for the 30th anniversary of TOTO Gallery Ma in Tokyo.