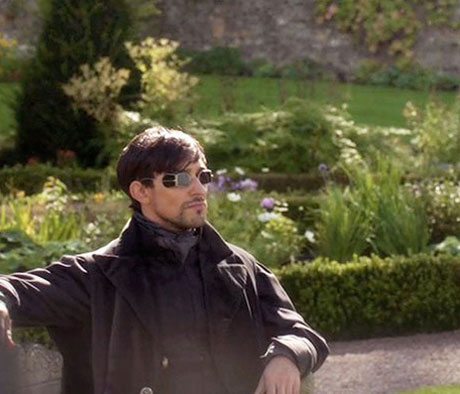 Eye-catching, in a recent episode of Da Vinci’s Demons, a landmark television series from David S. Goyer co-writer of the Dark Knight Trilogy in which English actor Blake Ritson features as the nemesis of Leonardo da Vinci (1452-1519). His character Count Girolamo Riario was seen wearing perhaps some of the grooviest shaded eyeglasses ever imagined recently.

Emeralds are found in nature in the form of regular crystals, which were very popular with the ancient Romans because they were very beautiful and seemingly also had a practical purpose. The Roman Emperor Nero without knowing, is thought to have invented sunglasses by viewing the games being held at the Colosseum through a large emerald, shading his eyes from the glare of the sun.

Scholars also know lenses were ground out of rock crystal in Sweden during Viking times, but the drive to find out who actually first invented eye glasses for people to wear is still ongoing. However, according to the British College of Optometrists, who you think would know, the invention of ‘spectacles’ is still shrouded in mystery.

They do report that spectacles were certainly being made and written about in Venice by 1300, although available evidence invites continuing scholarly investigation and discussion as to the probable origin of visual aids, which is apparently largely based on ‘supposition, instinct or biased opinion’. Making spectacles to aid sight was definitely happening during the late 14th century, at a time when the majority of people wouldn’t have known they existed or even had access to them. Florence was producing both convex and concave lenses in great quantities and only supreme individuals like Count Riario would have had the ready necessary. Those Blake Ritson is wearing in the original STARZ television series Da Vinci’s Demons are totally charming and part of his costume, which links his character Count Riario to our modern age in a cool and groovy way.

One of the earliest visuals of groovy eyewear known in painted work is among a series of frescoes dating from 1352 by Tommaso da Modena. They are in the Chapter House of the Seminario, which is attached to the Basilica San Nicolo in Treviso, north of Venice. In a detail, Cardinal Hugo of Provence is seen at his writing desk wearing a pair of rivet spectacles, which appear to stay miraculously in place on his nose without additional support. In reality the Cardinal actually died in the 1260’s, nearly a century before the fresco was painted.

The point the artist was really making is that visual aids were being portrayed as devices for the use of literate men, as well as aesthetes – they had, after all, commissioned this important work of early Renaissance art.

Connecting our past with our daily life in the most beautiful way is the province of those who collect antiques and art. The five senses we have are powerful, evocative and seductive and over the years great objects or works of art have relayed that information to us.

An image of a Meissen figurine of Count Brühl’s Tailor depicted with meticulous detail from the tailor’s jaunty tricorne hat to the colourful coat and jacket he is wearing, is a delightful connection to the story of the sense of sight.

It’s a unique and wonderful object by the German porcelain factory of Meissen.

It depicts the goat and his tailor both wearing eye catching eyewear. Charming detail before the goat's glasses were restored

The original piece designed in 1737 and produced in 1740 with a companion piece, The Tailor’s Wife is rare.

Johann-Joachim Kändler (Kändler) was the most famous sculptor at the Meissen factory in Saxony and it was he who designed what is considered one of Meissen’s great figurines.

This delightful object is part of a remarkable collection of some eighteen thousand objects and items relating to the history of sight and the evolution of visual aids for the human eye. Made in 1870 can be found today in unique museums, which is in the care of the College of Optometrists at London, the oldest of its type in the world.

The museum’s gorgeous goat entered the collection in 1937 and went for thirty years without his glasses intact until they were recreated from original sources, with the conservator ‘making an informed guess about the goat’s prescription’.

He is also said to illustrate an important moral tale, warning those who seek to rise to quickly in life, without learning its all-important lessons that they could end up looking like ‘goats’ if they are not careful. Sounds like the perfect collectible for politicians. They say ‘seeing is believing’, but for a lot of people visual impairment is a way of life they have to embrace and accept, whatever its severity and that’s not an easy journey and while it’s not ideal, having a groovy look at least helps. 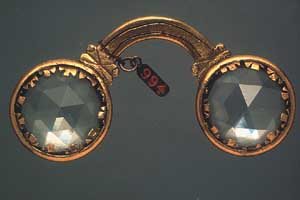 Multiplying Spectacles, England, about 1650; Gilded metal and rock crystal, courtesy of the Board of Trustees of the Science Museum, London

It was a London optician Edward Scarlett (1677-1743) who added practical side arms to earlier forms of hand held or spectacles that perched on the bridge of our nose and were hard to keep on.

He solved the problem after 440 years, so there were many people who were exceedingly grateful.

It also came at a point in history as the eighteenth century dawned in Britain, bringing with it great prosperity and advancement during the ‘Georgian era’ (1714 – 1830). 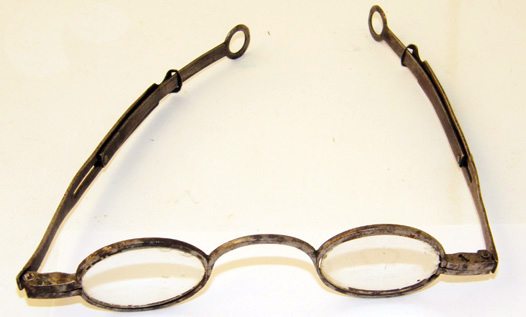 From being known as ‘visual glasses’ eyeware became known as ‘spectacles’, after all daily life as seen through new and improving lenses as they evolved, would have certainly seemed a colourful spectacle.

During the 18th century the Americans finally got in on the act and with people of status like Benjamin Franklin, one of the most revered of all polymath’s wearing them, it seems appropriate that because of innovative merchants in Philadelphia, which had been the birthplace of the nation, that it became a focal point for optical improvement.

After importing products for years and realizing that America needed a local product, John McAllister (1753-1830), a prominent figure became the founder of the profession of opticians. Franklin wore his bifocals or split lenses as they were known, which were made by halving lenses of different powers across the middle. The upper was for distance, the lower for near.

In May 1785 Franklin wrote to London philanthropist George Whatley saying ‘I wear my own glassess constantly and, I have only to move my eyes up or down…’

Fashionable concerns became an important consideration as the industry began to boom with Bausch and Lomb becoming the most successful in the 20th century.

In France by the 50’s spectacles had become a fashion accessory in Europe and North America. However in Great Britain at that time, they were just starting to become an accessory, and they lagged behind their active, creative and innovative U.S.A. cousins, function coming before beauty. There didn’t seem to be a concept that both was possible. It’s no surprise. Having a good perception of who we are and how we look is fundamental to our humanity and important to our self-esteem, boosting our confidence.

Today using technology endlessly has had a huge impact on our eyes. In less than a century our attitude has also changed dramatically, as more and more people need visual aids and urgently. This means that making them attractive has become more and more important.

After all our progress in the arts, culture, craft, commerce and science was limited for so loong by our ability to see. The development of optical lenses that would aid our vision from the reality of our personal day to the minutiae of exploration in the scientific, technological and medical world has meant progress and change on a grand scale, one that could have never been foreseen by the ancestors of our distant past.

In 1946, the Italian physicist known for his work in optics Vasco Ronchi (1897-1988) of Florence stated “when it is all summed up, the fact remains that this world has found lenses on its nose without knowing whom to thank.”

The British ensemble cast presenting writer director Sally Potter’s The Party, fail to keep to what is morally right and politically left in a witty wicked film