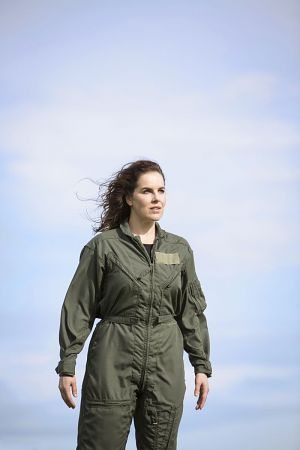 I responded with awe to this contemporary theatre experience that soared and delivered to the audience a spellbinding insight into current warfare, the decimation of personnel and the ever pervasive presence of unremitting surveillance.

Grounded has its current season at the Reginald Theatre Seymour Centre Sydney. It was performed at the Red Stitch Actors Theatre in Melbourne in 2014 and since then has been touring Australia.

Grounded is currently running in New York with Anne Hathaway. It is without doubt the play of the moment and one definitely not to miss.

I was mesmerised when I read the play and was totally captivated by this production of Grounded. The poetic language of this free verse monologue was lyrical and embedded with a narrative of challenging proportions and enthralling engagement.

To my way of thinking the absence of punctuation in the text crafted a fluidity that reflected the endless blue sky, central to the setting of the play. The Pilot [Kate Cole] was storyteller protagonist and critic. Her performance was sublime. She is an actor of impeccable training who transferred her professionalism, astute character analysis, lucid articulation and voice projection into her role. I was constantly amazed at the architectural and sculptural formations she so effortlessly created with her body. Kate Cole gestured with hand movements that were sympathetically aligned to her spoken words.

George Brant articulated “somehow having a women’s voice in connection with a new technology brings a certain newness and freshness to the play as a whole. The story of war has been told so many times from a male perspective.”

Issues related to gender were explored initially by casting a woman as The Pilot. She was extremely intelligent, with physical prowess and a finely tuned perception to her situational surroundings. The Pilot was also very proud of her highly victorious missions in the G-force, launching missiles to eradicate the enemy. She was totally immersed and completely contented in her role in the sky.

“You are alone in the vastness and you are the blue’’

The Pilot drew the audience on her personal and professional journey. She presented images of people, events, circumstances and environments that the audience could respond to and at times identify with.

She had a powerful and very convincing presence on stage as she moved from being with Tiger, her beloved aircraft high in the sky to the personal love of her life Eric on the ground. “He tells me he can feel the sky in me.”

Their love flourished and commitment to Eric and their baby daughter, Sam became The Pilot’s new life.

Nevertheless she soon developed a deep yearning to return to the sky but simultaneously was torn by her strong desire to be wife and mother. She was tormented by these conflicting dilemmas. However her husband understood and was supportive so they all packed up and moved to Las Vegas, where she travelled daily to Creech Air Force base in Nevada. The disappointment at being given a desk job operating remote controlled drones from the “an air-conditioned trailer that seals me off completely from all sky all blue” oozed in the tears she shed.

Her combat tasks were relentless and the silence of pressing buttons to kill, totally detached from the battlefield was sinister and horrific.

She returned to her home, husband and daughter each night but the shifting boundaries between professional and personal life begin to distort and merge.

She struggled with physical and psychological exhaustion, images of destruction and dead bodies lingered as her confusion escalated. Her adjustment to this new assignment away from her cherished sky was fraught with anxiety, mistrust and disillusion.

Her loving husband tried to ease her pain and gently bring her back to the normality and comforting familiarity of every day family life.

There was a sadness and vulnerability in the home that contrasted dramatically with the callous cynical aggressive atmosphere of the base. The endless tracking of high-profile targets was unbearably demanding for The Pilot. The tension built to a climatic pitch as the heroine confronted making a hideous and heinous decision.

Kate Cole never wavered in her performance and courageously tackled complex emotions and constant intellectual challenges. She read the emotional text of the play brilliantly. Her story telling prowess and command of a poetically infused dialogue was exemplary. The audience were the fortunate recipients of a judicious performance by Kate Cole.

The subtlety and flexibility of Adrian Black’s set design and lighting, took the audience immediately inside a jet fighter plane. The concave grey interior shell formed a perfect backdrop for the dialogue, changing scenes of the drama and actions of The Pilot. 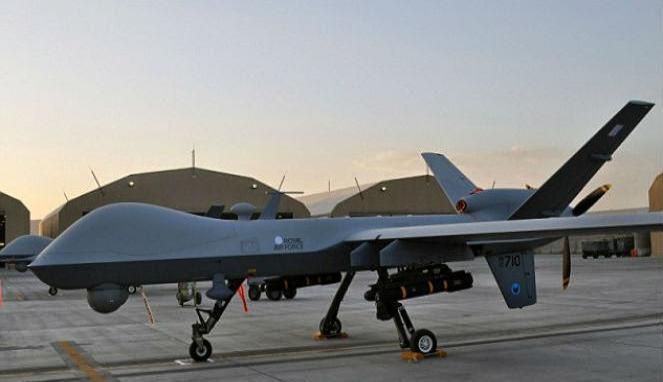 The ethereal substance of the sky was effectively generated by very up-to-date artistic lighting effects that created timeless space and at appropriate intervals an uninterrupted sky.

The mass coloured hues were ever changing and heightened unfolding emotions and evolving events.

Adrian Black certainly understood and mastered the playwright’s intent and he has executed his role with an integrity that reinforces “The Pilot’s mental landscape and contributing a growing sense of unease throughout.”

The composer Elizabeth Drake’s scoring at times fluttered like an engine hovering above. Her quintessential approach was conceptually in line with the notion of the production as a whole.

The Director Kirsten Von Bibra conceived a clear personal imaginative vision that permeated this exceptional production of Grounded. She perfected and shared her visionary skills to embrace all facets of the production. I feel sure she has guided Cast and Crew to new spiralling heights.

Ella Caldwell Artistic Director of Red Stitch Actors Theatre should be given a long round of applause for programing Grounded in their 2014 season.