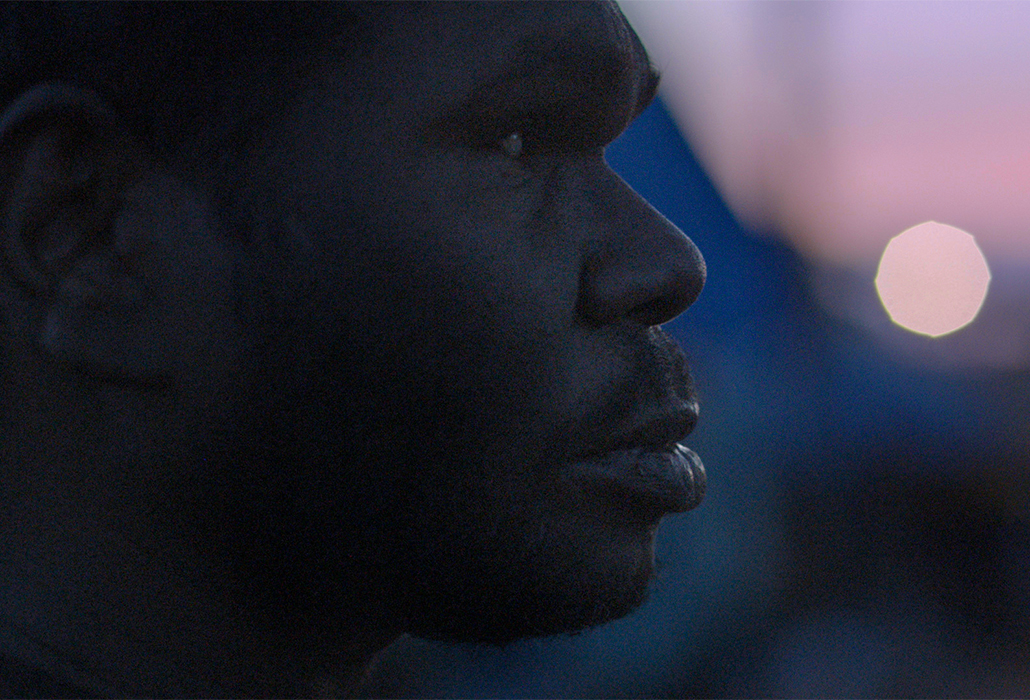 Transcending cultural boundaries, GURRUMUL, a documentary film distributed by Madman Entertainment, released on April 25, 2018, provides a truly reverent portrait of the talented blind musician and the man considered in indigenous culture, a Child of the Rainbow, Geoffrey Gurrumul Yunipingu (1971 – 2017).

Australia holds itself up to the world as one of the most successful multi- cultural countries on earth, however when it comes to our indigenous peoples, most of us living in its cities and many of its towns would not ever have had an encounter with one of their communities, let alone the  wondrous people who have lived continuously for 65,000 years in remote areas of the country.

Referred to since his death as Dr G Yunupingu, Geoffrey Gurrumul Yunipingu is today known affectionately as GURRUMUL 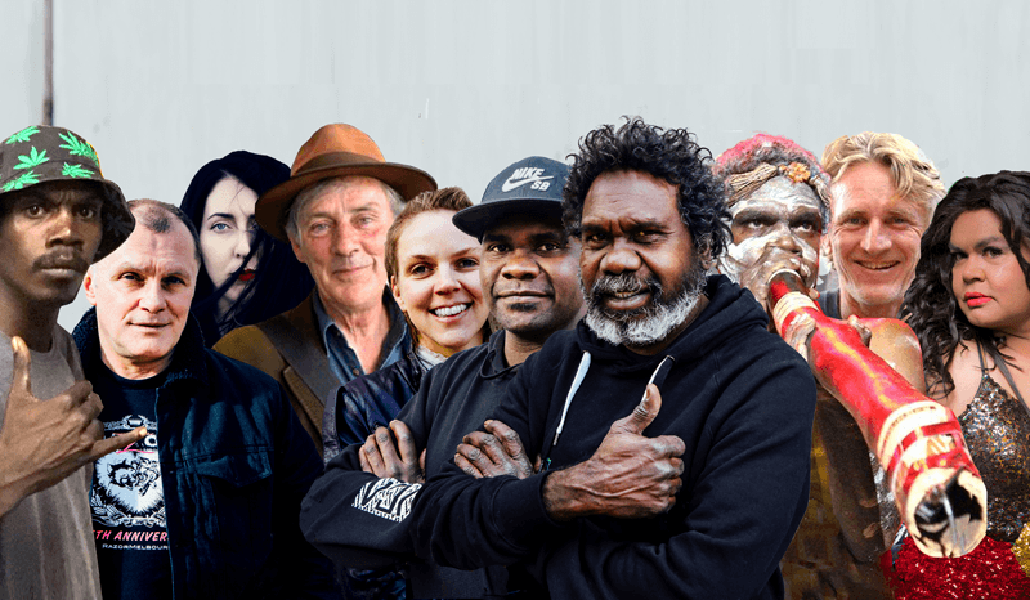 He was one of Australia’s most celebrated and important indigenous voices and artists in recent history and became broadly known initially in his own world before going global.

Through the world class performances of the amazing Australian musical group Yothu Yindi, and later again as a solo artist, Gurrumul slowly came to attention. People were intrigued at his amazing skills.

Yothu Yindi (1986-1990), brought together blackfellas (yolngu) and whitefellas (balanda) to make a unique and very special sound, one that slotted easily into both contemporary pop and rock song genres.

In recognition of their success in introducing the indigenous sounds of Australia to the people, the band was inducted into the Aria (Australian Recording Industry Association) Hall of Fame in 2012. 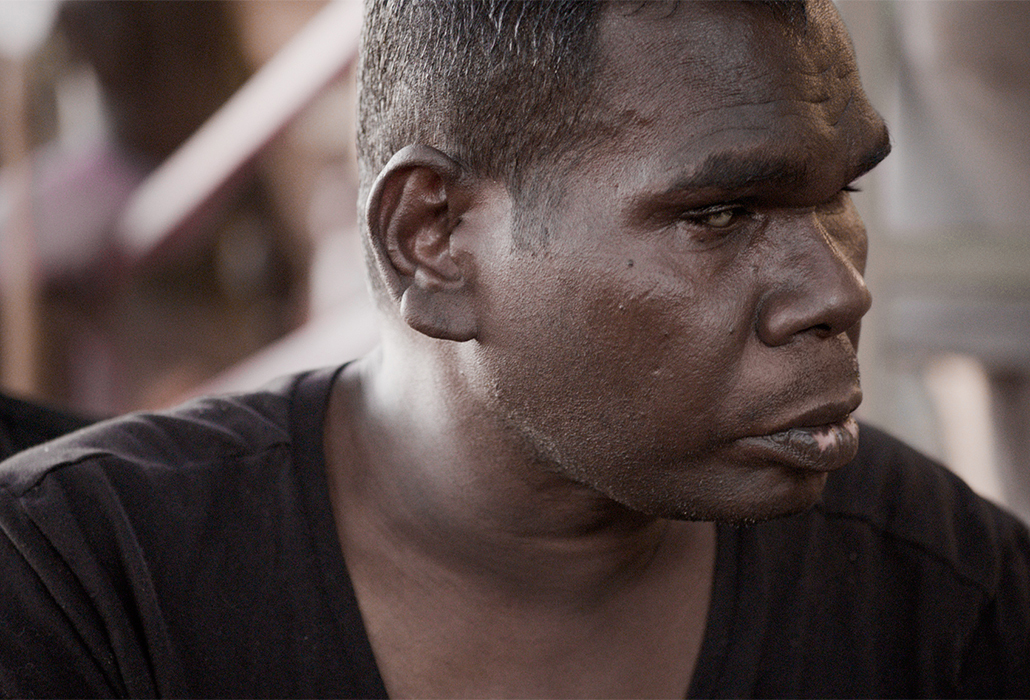 Sharing ideas between cultures is meant to encourage each and every one of us to open our hearts and to help stem the tide of indifference between human beings, through misunderstandings.

Being a child of two worlds for Gurrumul, meant one of darkness and one of light; on one hand living remotely on Elcho Island in the Northern Territory, and on the other, touring in the world of showbusiness.

Being born with a lack of sight through his rare musical gift he exceeded way beyond his clan’s expectations of what he would be able to achieve.

This however is only part of the story. He also brought the light of his love for his people and their ancient cultural heritage to the wider world.

In Yolngu lore normally the name, image and voice of a recently departed person is retired from all public use. 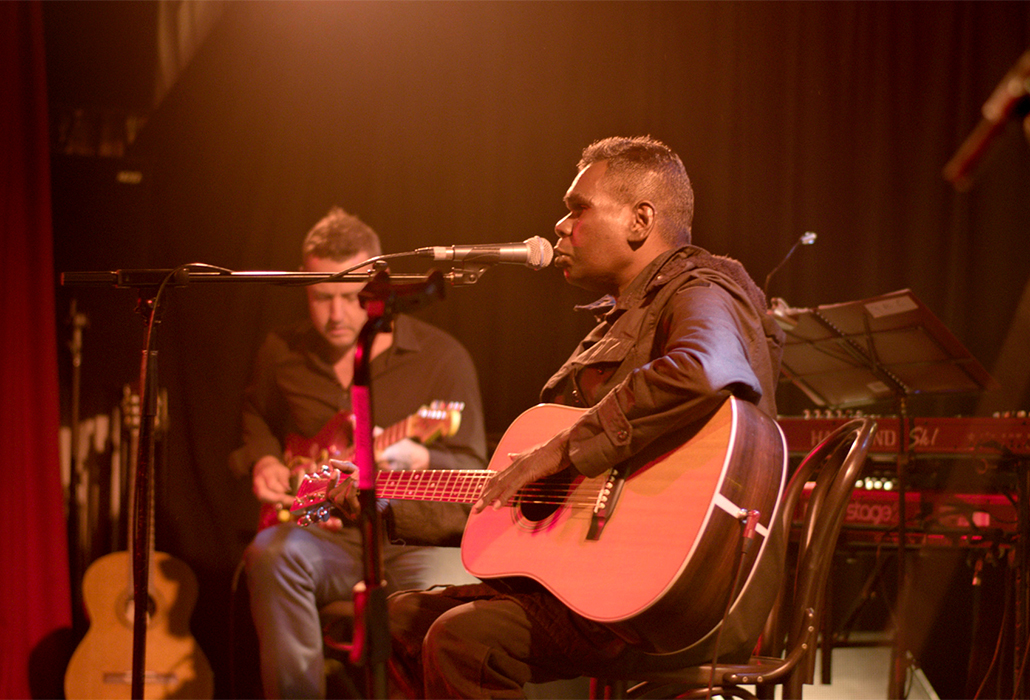 A very rare exception has been made by Gumatj and Gälpu clan leaders for this film to be shown around the world, helping to continue the positive aspects of his life’s work.

Singing in his native Yolngu language, Gurrumul’s debut album meant he became the Australian voice of his generation. Hitting triple platinum in Australia, silver in the UK and charting in multiple other countries across the globe, he was well on his way to fame.

The highest selling Indigenous artist in history, Gurrumul released two top five studio albums Rrakala and The Gospel Album, achieved a swag of ARIA Awards, and released the first Indigenous language single to reach the top five, all the while continuing to call Elcho Island home.

One way we can hope to increase our knowledge is through the wondrous songs passed down through various indigenous clans, including the Yolngu culture of North East Arnhem Land, Gurrumul’s Gumatj Clan Nation and his home town Galiwin’ku on Elcho Island, which is just off the coastline of the city of Darwin in the Northern Territory. 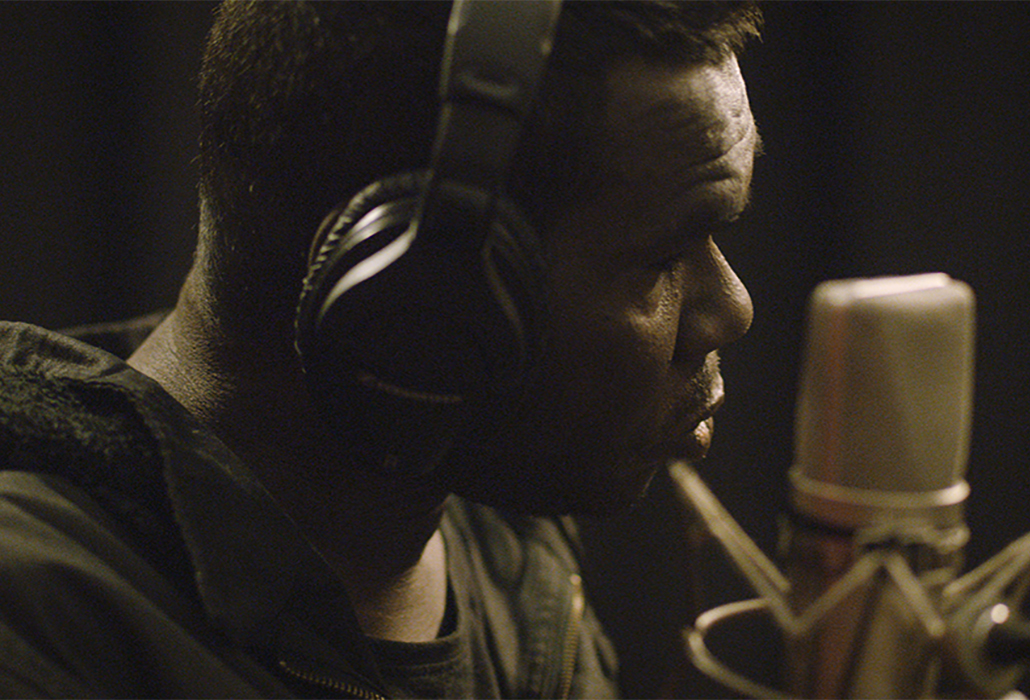 Written and directed by Paul Williams, produced by Shannon Swan, the often-confronting film, gradually reveals the artist’s true legacy, including the establishment of the G. Yunupingu Foundation, formed to create opportunities for young indigenous people across the Northern Territory.

Paul Williams knew Gurrumul personally; he thought Paul a good fella. This was important in making a film with his participation, not possible without that bond of trust. He approved its release just three days prior to his death aged 46 following a long battle with illness.

Showcasing trust is a huge aspect of the film; especially in his relationship with Michael Hohnen and Mark Grose from Skinnyfish Music, who helped to bring the man and his music into the broader world. 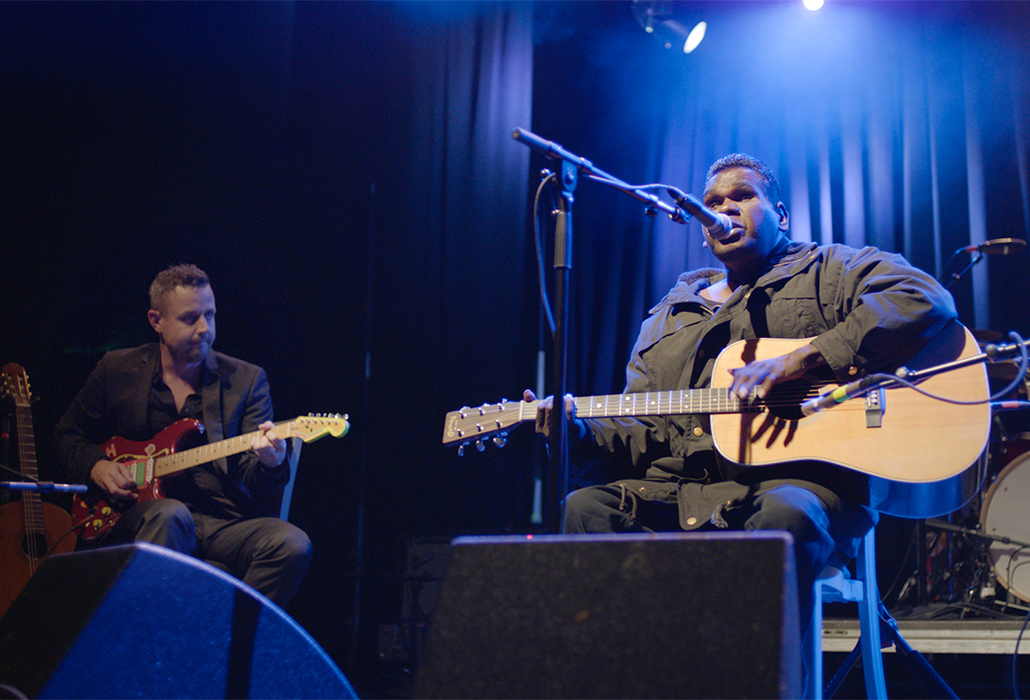 The story is told simply and from the two cultural perspectives; balanda (whitefella) and Yolngu (blackfella). 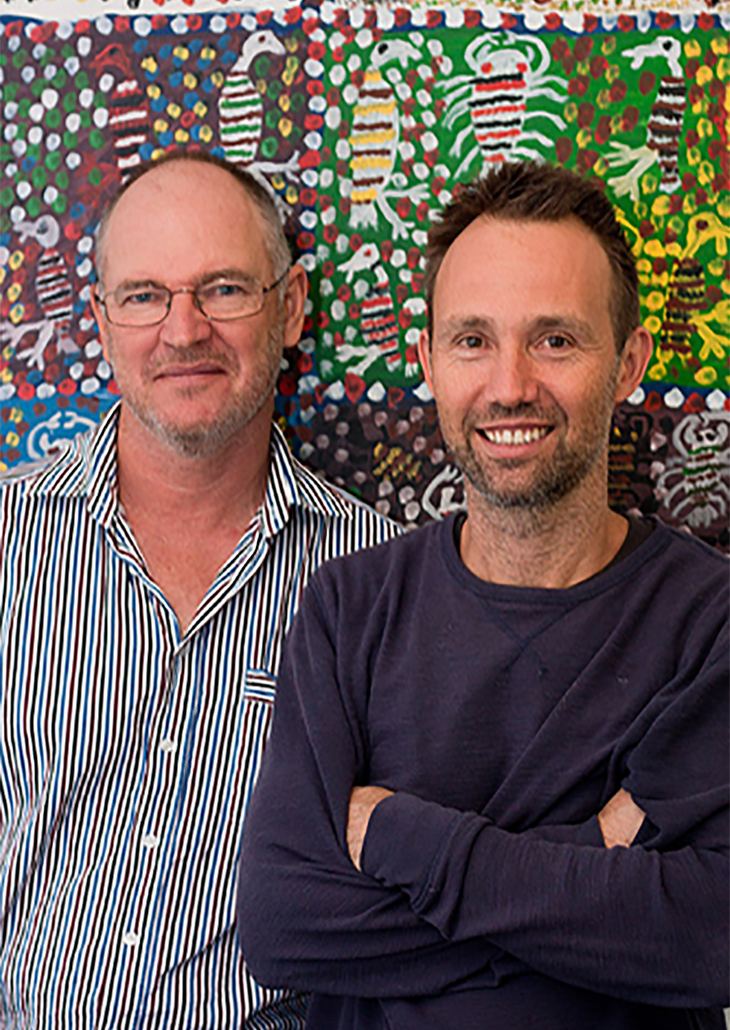 Michael and Mark noted “… it was important to Gurrumul his normal life was as far away from the trappings of fame and fortune as possible. He only embraced his musical ‘whitefella’ life to a point. It was certainly too hard for his collaborators to predict or know why he didn’t turn up for his first expected well publicised tour of America; but his own community business for Gurrumul always came before making money, so popular in the white fella’s world.

While the duo and their supporters lost a lot of money on that occasion, they did not lose the relationship with their friend and he finally toured America in 2015, playing to smaller audiences but with them all achieving a great deal of inner satisfaction.

In Gurrumul’s world Mark Grose (manager) and Michael Hohnen (musical collaborator) stumbled across the raw musical talent of Elcho Island first in 1996. Together they formed the SkinnyFish Music label (based In Darwin) to help preserve the sounds of the music they were hearing. 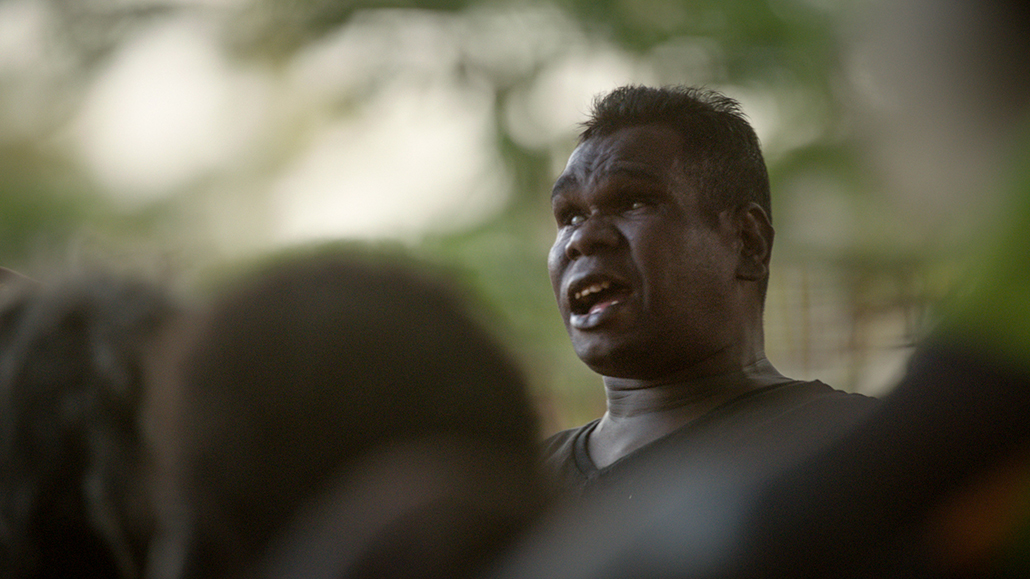 They had no idea they would discover a voice that would penetrate so far and wide, that they were completely unprepared for when it did.

During the 1980s, Mark spent much of his 30s and 40s in remote aboriginal communities in the Northern Territory and Western Australia. During his time there he formed many ideas about what he refers to as the “200 year tragedy of Aboriginal Australia”.

Mark became Gurrumul’s manager because he was so respected by the community on Elcho Island. He’s fiercely protective of his friends and still driven to save what is left of Indigenous culture. 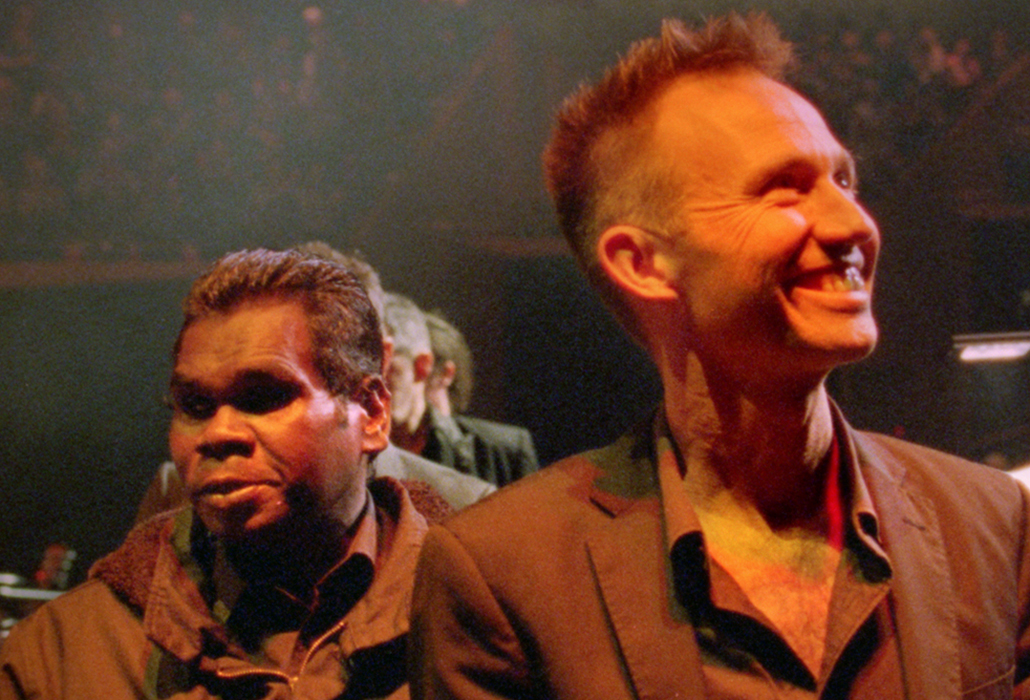 Michael was part of the Melbourne music scene for twenty years until he packed his double bass into his car and headed north in search of a new different sound. He found Gurrumul and they formed a relationship; a slow burn of trust building over the next 10 years.

After that time they became inseparable, calling each other wäwa, the Gumatj word for brother. With a smile, they shared a bond on and off stage as powerful as you can get, especially with the same key driver: music that resonates.

The absence of sight can and does strengthen and accentuate our other senses… “transporting feelings that can be imaged or real” says Michael Hohnen, as he and his collaborators pay tribute to their late friend by painting an affecting “…musical picture… with vision… making the story as literal, sophisticated, complex and timeless as both Gurrumul’s music and culture. 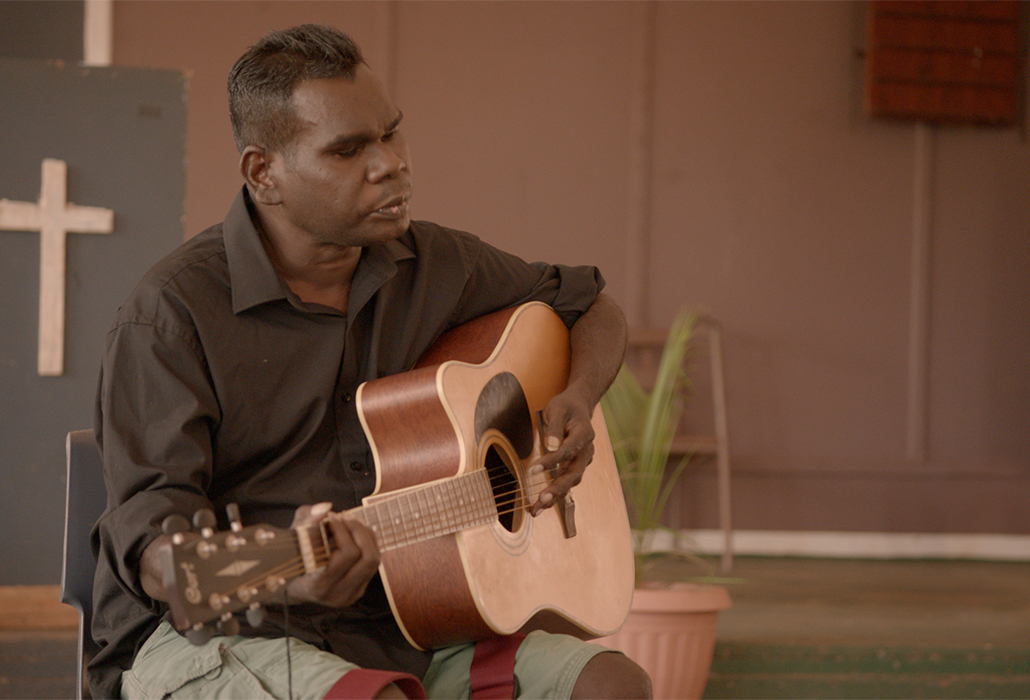 Over the centuries the instruments played and the voices that have sung, have contributed to expanding harmonious life providing an entertaining and joyful experience, while affecting the lives of many people.

Their special performance happened quickly and without Gurrumul really understanding the popularity or the talent of the successful singer he was working with at first, or the song he had been asked to join him in singing… Every Breath You Take. 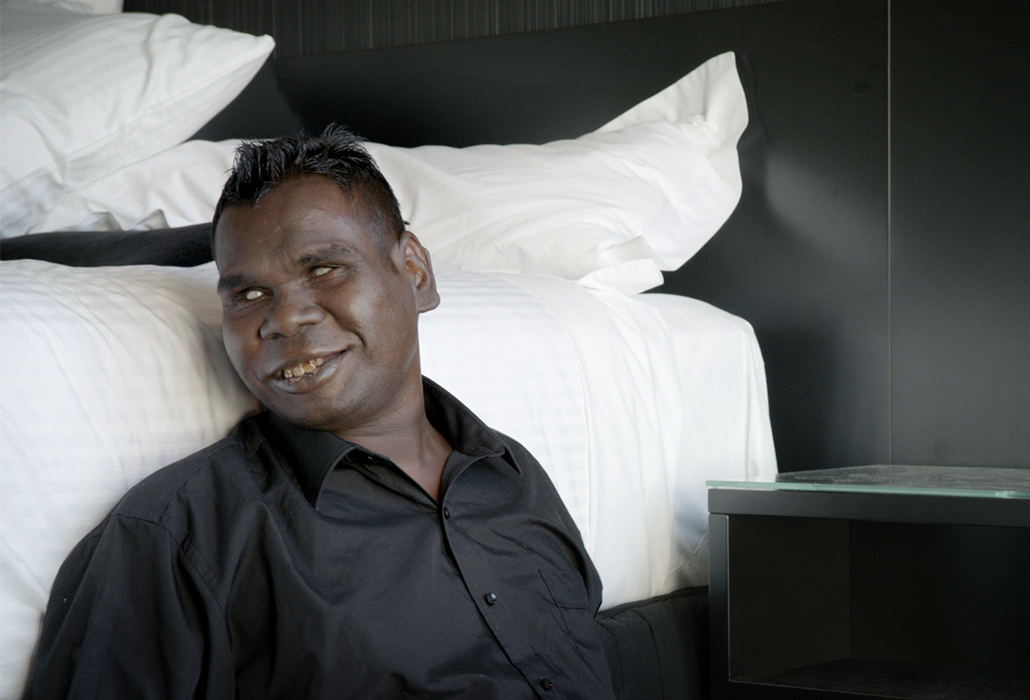 The event turned out to be more than memorable, the music creating a camaraderie, expressing emotions and ideas while helping to create the art of sound.

Sitting high on a cliff above the Three Sisters in the Blue Mountains, he became one of the contributing vocalists on Gary Barlow’s commemorative single “Sing” for Queen Elizabeth II’s Diamond Jubilee celebrations. He then went to London to perform live at the Diamond Jubilee Concert on Monday 4 June.

He also received an Honorary Doctorate of Music from the University of Sydney.

Gurrumul worked with Michael Hohnen and interdisciplinary artist Erkki Veltheim to produce an outstanding crossover orchestral album featuring music created using the sounds of his own traditional culture and that of European classical music, which has been released in concert with this film.

Djarimirri (Child of the Rainbow) contains a collection of traditional songs and harmonized chants. The song also titled Djarimirri sung in the Yolngu language, is very appealing, speaking to tradition and a life of wondrous musical experience.

Traditions are generally associated with pleasure and warm and fuzzy feelings rather than those that cause pain. Tradition also takes many forms and at its most simple is about a display of good manners, which when employed ensures communities are pleasant places to live in.

The indigenous community seem to understand the depth of spirituality that can lead to a far better life than the balanda do; it is both their strength and their purpose.

GURRUMUL is a very moving documentary film not to be missed by anyone calling Australia home. 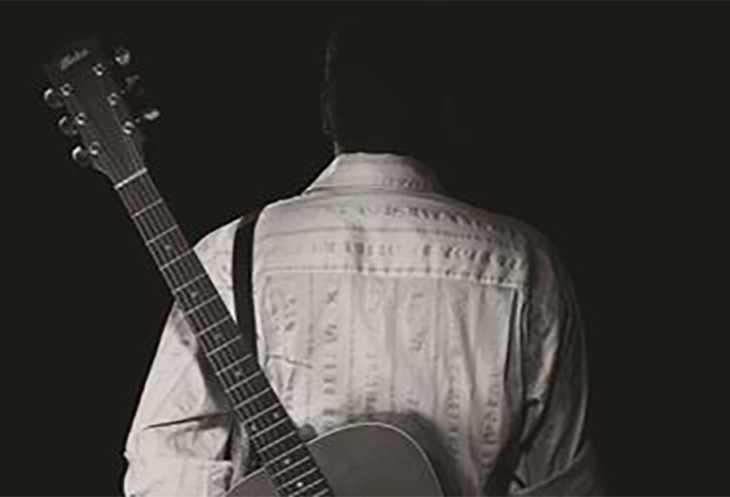 SHORT SYNOPSIS
Celebrated by audiences at home and abroad, indigenous artist Geoffrey Gurrumul Yunupingu was one of the most important and acclaimed voices to ever come out of Australia. Blind from birth, he found purpose and meaning through songs and music inspired by his community and country on Elcho Island in far North East Arnhem Land. Living a traditional Yolngu life, his breakthrough album ‘Gurrumul’ brought him to a crossroads as audiences and artists around the world began to embrace his music. GURRUMUL is a portrait of an artist on the brink of global reverence, and the struggles he and those closest to him faced in balancing that which mattered most to him and keeping the show on the road.

Empowering and enlightening Brian Cox shares his insights into the Wonders of Life on earth with great empathy, helping us to transform our own lives yet again