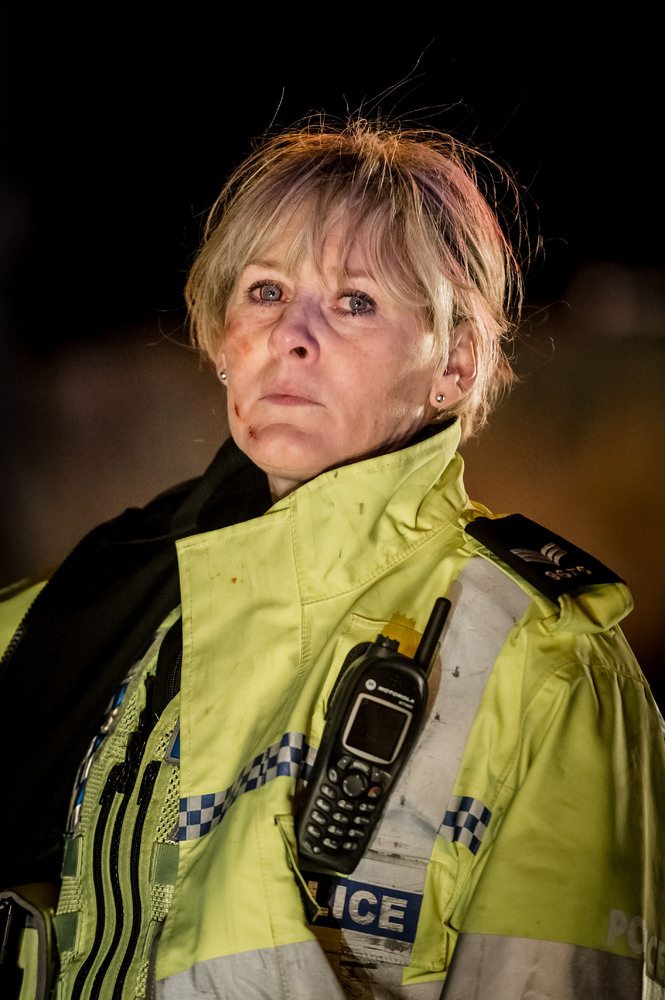 We have become so used to English television shows being shot against a backdrop of picture perfect postcard landscape scenery that when a show named “Happy Valley” comes along we expect it to be something personable and pleasant.

When we then find out it is to be set in what should be a ‘Happy Valley, a village set against a backdrop of the wonderful English countryside with its gently rolling hills and dales and earthy stone houses, then we can be excused for thinking we’re going to be in for a glorious ride.

In the past few years Sarah Lancashire has come into her own as a British actor of the very best kind. Her wonderful portrayal of a middle aged snobbish spinster struggling with the disappointments of her life, while working in The Paradise department store won her much praise.

Her Bafta award-winning supporting role in the delightful series Last Tango in Halifax in the capable hands of BAFTA Award winning television writer and producer Sally Wainwright (Scott and Bailey, At Home with the Braithwaite’s) was also heroic.

In BBC ONE TV Series Happy Valley Sarah is working again with Sally Wainwright. She is featuring in what sure be one of the most superb British crime dramas yet filmed. Against Happy Valley’s backdrop of gentle green slopes we encounter gripping, gruelling village-noir of the deep and darkest kind yet imaginable. The series is a finely crafted powerful drama, which puts us all through an emotional wringer, the pain and grief often too hard to bear. It certainly achieves at a pinnacle of excellence in acting as well as every aspect of production.

Some of the horrific crime scenes are so realistically filmed you believe you are watching man’s inhumanity to man in all its earth shattering reality.

Sarah Lancashire stars as Policewoman Catherine Cawood. She has given up her higher rank as a detective, to go back into the force working shifts that suit the time requirements for raising her grandchild on her own, with only the help of her sister Clare, who is having her own struggles. This show while exploring every aspect of the societal dramas we share also takes on the enormous burden of the moral dilemmas we face in our time. The cast as an ensemble is masterful. Sarah’s performance is a stand out as Catherine, her piercing blue eyes open the window to your soul and you cannot help but admire the courage of her convictions.

Efficiently, in the first moments of episode one Catherine gives us the basis of her life in a wonderful ‘diatribe’ delivered at a drunk she’s taking down, because he’s turned suicidal in a children’s playground. When he complains about the rum hand he’s been dealt in life she retorts her life isn’t so great for her either; she’s single, raising her grandchild on her own and has an ex-junkie sister.

Here’s a woman who has to be sensitive enough to deal with people in tragic circumstances, the daily grind of just being a mother and all that entails, a caring sister and a tenacious single minded and focused cop, trusting her instincts while allowing us to see her soft side and vulnerability.

What an acting tour de force it is. Episode 4 of the six that make up this series ended so shockingly I found myself in crisis on the couch as I endeavoured to take it all in. This is the terrible story of how a series of events and mis-aimed petty jealousies can so easily not only get out of control, but also turn into truly dreadful events of the most catastrophic kind.

A small minded accountant (Steve Pemberton) working in a manufacturing firm working in the north of England, misunderstands his Boss Nevison Gallagher’s intentions and plots how to get his own back.

He does a deal with a local builder come drug smuggler to ‘take’ his boss’s only teenage daughter and hold her for ransom.

In his naivety he thinks it will be easy and they will just get rich quick and get away with it.

He’s in too deep by the time the whole thing begins to go horribly wrong.

This is when he also finds out that his boss was going to give him a rise in salary and status all along. Steve Pemberton as accountant Kevin Weatherill seen here with Joe Armstrong as Ashley Cowgill the developer and Adam Long, one of the workers who helps kidnap the daughter of Weatherill’s boss

However in the chain of events already in place it is all too late and he doesn’t speak up.

The young teenage schoolgirl daughter has been kidnapped and is suffering dreadfully at the hands of her captivates, one of whom is weak, the other strong. What the ‘builder’ also doesn’t realise is that one of the casual workers he has involved in the scheme Rommy Lee Royce, is the man responsible for the rape and subsequent suicide of Catherine Cawood’s daughter after giving birth to her child years ago. This is a concise condensed brilliantly written script from Wainwright, whose gift at storytelling is at its supreme best for this torrid tale.

We learn how complicated life can be, especially when working within an institution where the chain of command includes so many people computer and desk bound who have no understanding of what is actually like out there on the beat

Catherine who is just ‘keeping her eye’ on the man responsible for her daughter’s death is out on parole, when she stumbles accidently across what is really happening. Everyone’s fate is inexorably linked in a chain of events that becomes more than ugly.

Sally Wainwright doesn’t once trivialise anything, giving this whole piece the complexity it deserves, without clichés. It’s filled with compassion, it’s messy, has empathy and involves the whole gamit of community attitudes and concerns, that are really all about fear and hate. This means when emotions take over tragedies can and do occur.

Morally and emotionally this is a tear you apart style of series of the most powerful and dramatic kind. Brilliantly written with amazing acting, especially from the cast of coppers my heavens, the reality attached to this show is very affecting.

You soon realise that the police are just like us, dealing daily with how awful life can be, especially out there on the beat.

We don’t know how much indebted to those who perform these tasks on a daily basis. There are no punches pulled at all. The violence against the women is all too brutally real and the men enacting it don’t draw any distinctions of gender either. 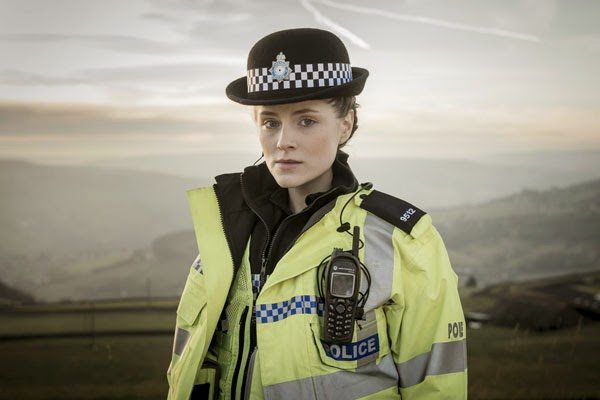 A lovely young policewoman played beautifully by Sophie Rundle is struggling with how tough the profession she has chosen to be part of really is. And, it’s about to get worse.

She’s out on patrol when she pulls over a white van because the headlight is broken. She doesn’t realise that the kidnapped girl is in the back and she is in real trouble.

You want to shout out and warn her when she hears the muffled shouting and banging from inside the back of the van.

Tommy, Catherine’s nemesis is following the van driven by his colleague and when he sees her demanding Ashley open the back of the van he both rams and runs over her multiple times.

It makes you so distressed you want to leap to your feet and plunge headlong into the fray to help bring him down. It’s hard not to think how you would feel if it was your friend or daughter. But it’s all too late, they’ve both driven off leaving her battered body on the road behind.

Catherine’s determined persistence and stubbornness endear her to you, especially when she endeavours to rescue the kidnapped girl Ann from Tommy’s drug addicted mother’s cellar.

She stumbles on the fact she’s being held there by accident, while following up an earlier enquiry.

We also want to shout out and warn Catherine that he is close by and about to find them all out.

He attacks her as she’s undoing the bindings on the captured Ann and she suffers a horrendous beating, until her young captive, motivated to help her would be rescuer, tears at her last few bindings and comes to Catherine’s rescue. This is tough, thought provoking drama at its very best. Two episodes to go, if I can make it.