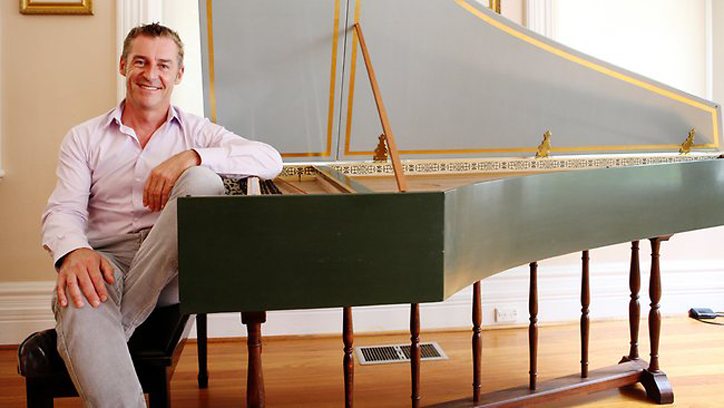 Australian Brandenburg Orchestra (ABO) based in Sydney, Australia, gives audiences wherever they travel, a wonderful platform on which they can encounter the master works of many of the great composers in history.

They also provide a platform on which their audiences are empowered to expand their own appreciation for what a period instrument is, what it does and what it can do, value adding to the richness of their musical experience. 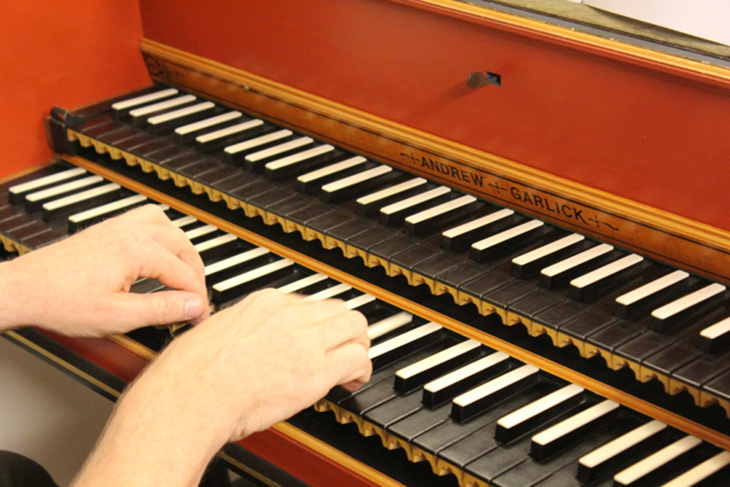 There is truly nothing like the sounds of Baroque music, especially when played on authentic instruments. Many of the masterworks of the Baroque era (1600 -1750) of which the ABO specialize, were designed to include one of the most defining instruments of the period; the Harpsichord.

Indeed, their artistic director and keyboard specialist Paul Dyer, who enjoys a reputation as a sensitive and skilled performer, plays his harpsichord with great elan. 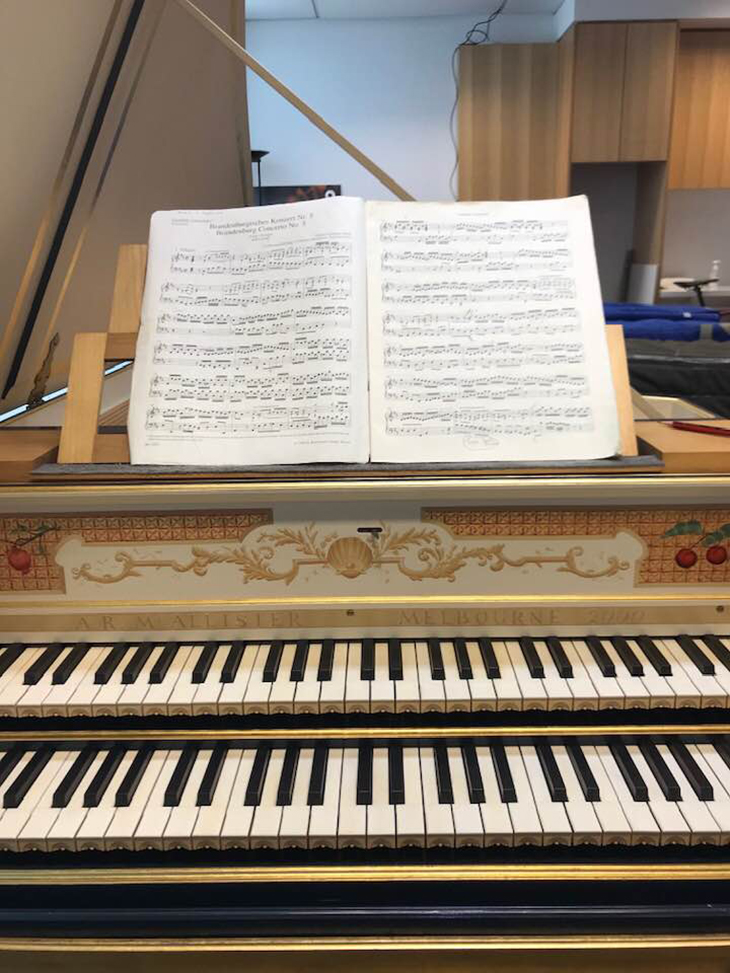 The ABO is playing five of the six acclaimed works in Sydney at its City Recital Hall (27 Feb – 8 March, 2019), at Parramatta Riverside Theatre (4 March) and at Melbourne Recital Centre (March 9 and 10).

Paul Dyer will be playing a beautiful French style harpsichord, made by Australian instrument maker Alastair McAllister –  a modern day recreation of a period instrument.

Alastair McAllister has become renowned for his historical integrity, design and craftsmanship. He and his colleague Mars McMillan founded Harpsichord Makers of Melbourne in 1967, and by the early 1970s, he was building harpsichords exclusively. 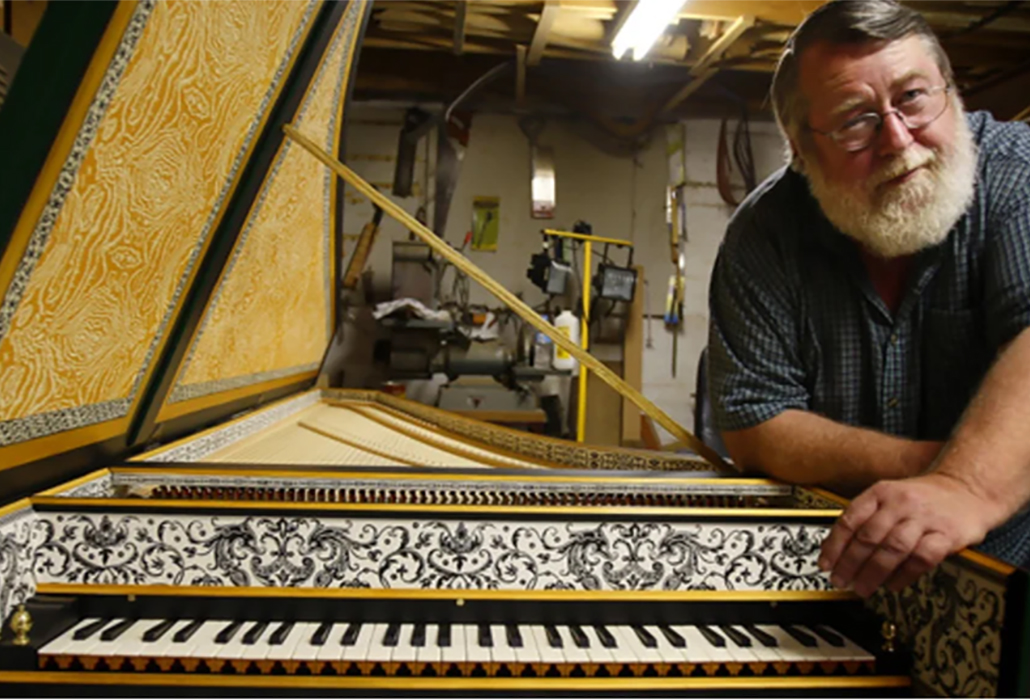 His prototypes in sound and touch are modeled on instruments of the Baroque era in music, having become inspired to enter his profession by the music of Italian composer Domenico Scarlatti (1685- 1757) 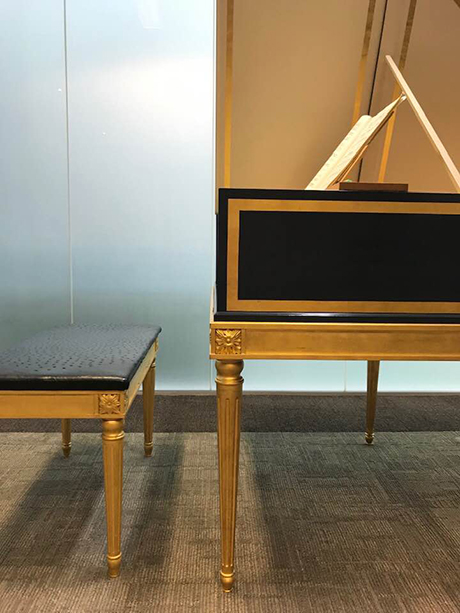 An accomplished harpsichordist, Scarlatti has been described in history as the “greatest Italian harpsichord composer of all time”

A number of people I have spoken to said they really do not understand the difference between a harpsichord and a piano.

Put simply the piano is a “struck string instrument”, whose sounds are made by striking strings with hammers and vibrating them.

A harpsichord, is a keyboard musical instrument in which strings are set in vibration by plucking.

McAllister and his colleagues around the world re-create their instruments patterned after the work of some of the most renowned harpsichord builders of the past.

Harpsichords were built in Italy during the early sixteenth century, with the instrument undergoing considerable evolution until it became one of the most important of the seventeenth century.

Most great Baroque composers played or wrote for the harpsichord and by the middle of the eighteenth century it often featured two keyboards. 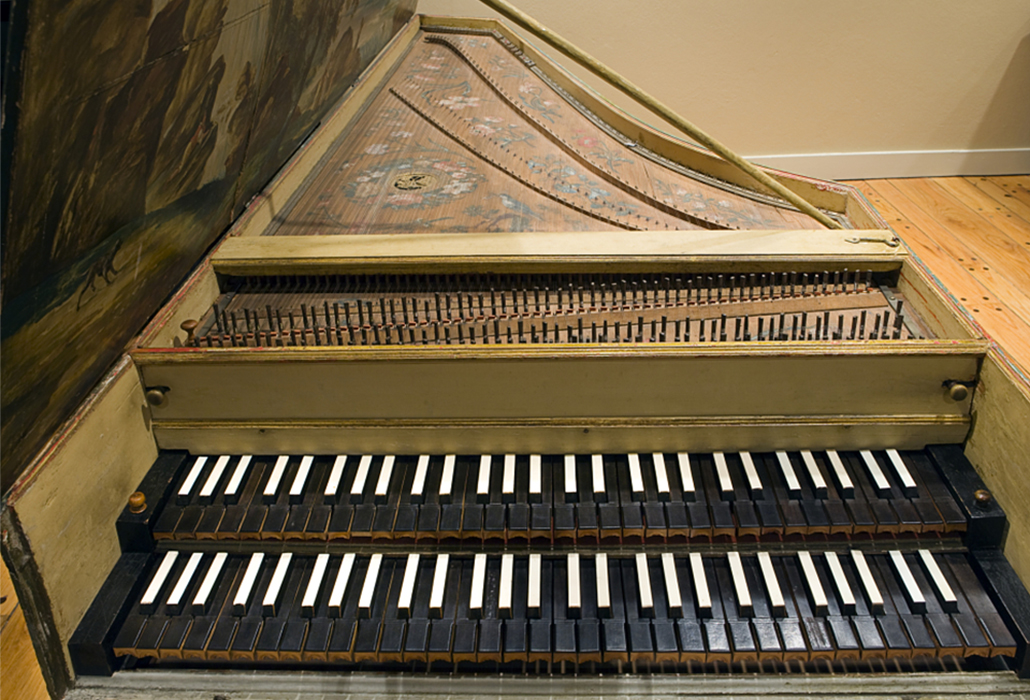 Many of the best harpsichords manufactured during the mid 1700’s were originally created by Austrian born Benoist Stehlin of Paris, during a period today considered the golden era of French harpsichord manufacture.

Stehlin devoted his life to the building of harpsichords, although only three are known to have survived. One is in the Smithsonian Institute in Washington, USA, another (dated 1750) at the Museé Antoine Lecuyer, St. Quentin, France, and the third (dated 1767) at the Musikinstrumenten-Museum in Berlin, Germany.

Joseph Haydn at his harpsichord

By this time specialist manufacture took place in Italy, Flanders, France, England, and Germany and highly decorated cases with exquisitely painted lids became fashionable in the home of a gentleman,  as a symbol of artistic inspiration. 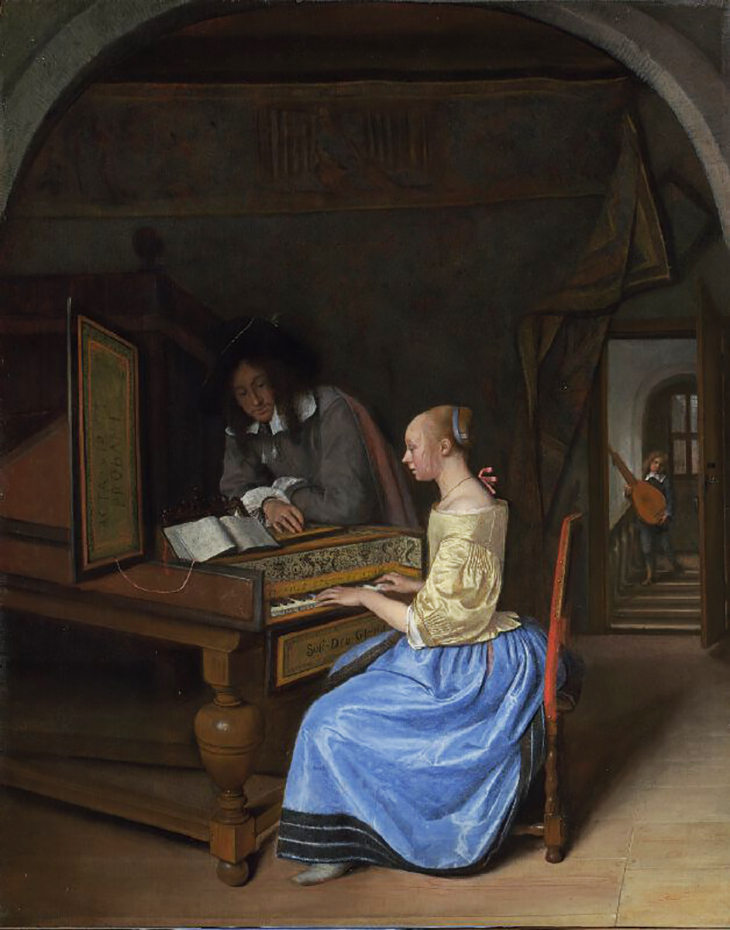 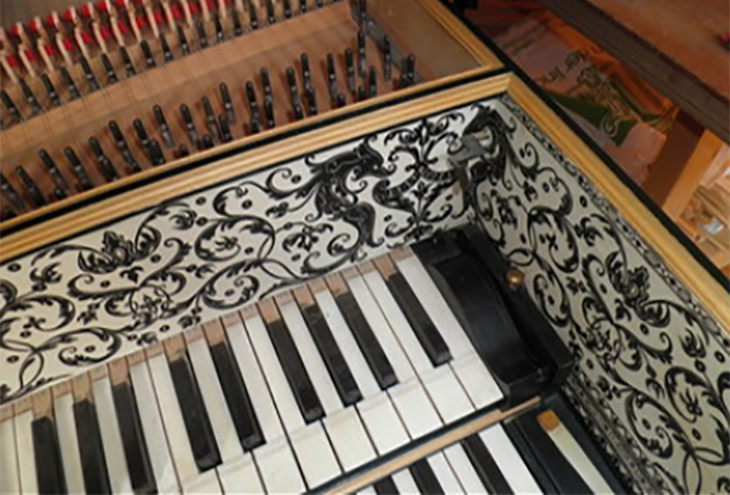 The case, lid, soundboards and stands of seventeenth century Flemish and french harpsichords, spinets and virginals were frequently decorated with designs specific to individual artists contracted by the same workshop

As a designer Audran was very flexible, producing everything from designs on walls to designs on harpsichords. His work had a profound effect on many artists, including his most accomplished student painter Jean Antoine Watteau (1684-1721) whose vision, and preference for worldly elegance, was widely emulated. 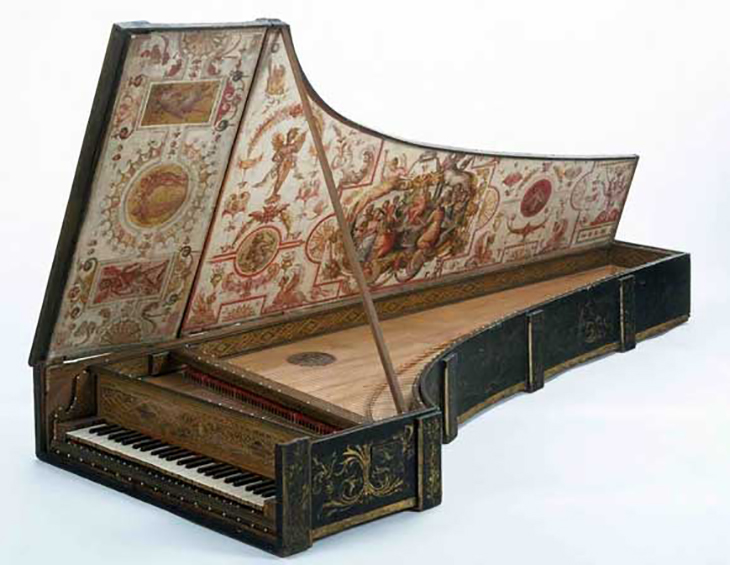 Harpsichord built by Giovanni Baffo, Venice, one of the main instrument-producing centres during the 16th century. The instrument is decorated with traditional Islamic patterns widely used in Venice, and fashionable classical motifs such as Apollo and the Muses, a suitable theme for musical instruments, courtesy V & A Museum, London

The harpsichord was overwhelmed in popularity by the more advanced pianoforte mid eighteenth century, until finally the smaller instrument was revived in intimate European country house salons during the late nineteenth century and indeed, ever since.

Recreating the sounds of a harpsichord for a modern-day musician means getting to the very essence and spirit of the original compositions; they achieve this by studying the specific techniques and interpretive characteristics used by the musicians of the period. 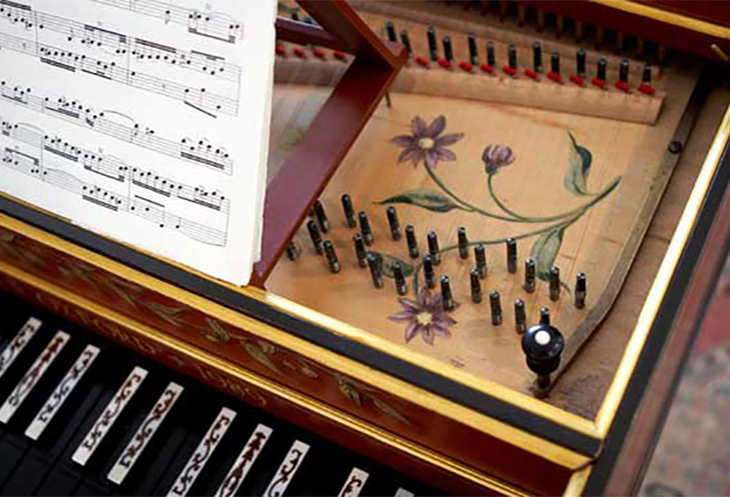 The harpsichord’s sound is indeed unique, helping to provide an atmosphere wherein calm can prevail in our very busy world.

Full of the warm, golden and wondrously rich colours from an artist’s palette, during the era of Baroque music, the nature of the harpsichord’s sound continues to enchant. Long may it do so, as I must admit, j’adore its gentle grace.