Detail of the Commode at Sotheby's

From London comes the announcement by leading auction house Sotheby’s that it has a very special antique marquetry commode coming up in a sale in December, 2010. Lot 69 is declared as ‘almost certainly by Thomas Chippendale’.

Entitled the Harrington Commode it is described as an important George III Gilt-lacquered brass mounted fustic, rosewood, tulipwood and marquetry commode made circa 1770 (within ten years either way).  The estimate is 600,000 to 1,000,000 GBP

Thomas Chippendale’s unrivaled skill as a designer and his extraordinary examples of mind bending craftsmanship as a maker, ensures that anything that arrives on the market associated with his name gains a great deal of attention.

By the end of the 1740’s the furniture trade in England had entered a period of almost unparalleled productivity. The climate of taste provided ideal conditions for fine craftsmanship and design to flourish.  The system of patronage set high standards of design and execution.

The very best furniture was expensive and created for what was a very privileged elite who were greatly concerned with style and fashion and wanted superb furniture to furnish their superbly designed houses. It was no use having a jewel box, if you were unable to fill it with jewels inside.

The centre of the less rigidly controlled furniture trade was London, more particularly St Martin’s Lane.  It was conveniently located near the government offices and their rich contracts. St Martin’s Lane was also the location of the St Martin’s Lane Academy, founded by artist and social commentator William Hogarth in 1735. With a concentration of artists, craftsmen, architects and tradesmen all working in the same area, there was ample opportunity for exchange of views, ideas and skills. Excellence in cabinetmaking during this period was led by a man whose reputation has only grown in stature over the intervening period. 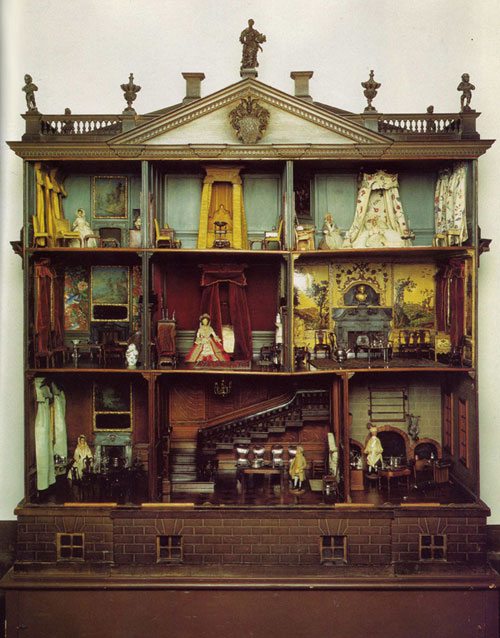 Thomas Chippendale. (bapt. 1718-1779) has become undoubtedly the most famous maker and designer of furniture in England during the eighteenth century. His design excellence, ingenuity, reputation for quality, skill of execution and ready adaptability to the changing needs of his clients fashionable tastes, means that today his remains a name well known.

He offered a complete house furnishing service and supplied his clients with enormous quantities of furniture of all kinds.  There was demand now for lighter more elegant furniture  One of the most important commissions of his entire career was for Sir Rowland Winn of Nostell Priory, Yorkshire.

The Doll’s House at Nostell is richly furnished in marble, silk, chintz, silver, walnut, mahogany, porcelain and glass. It is a treasury of craftsmanship and a unique record of daily life in a great country house of the period. No detail has been overlooked from the needlework fire screen in the delightful dressing room to the tiny glass mouse under the kitchen table.

It is well to remember some of the less glamorous facts about Georgian society and its intense consciousness of rank and class in endeavouring to understand Chippendale’s career.  The hauteur which made ‘the English milordi’ notorious abroad, was also directed at those he believed to be his inferiors at home.

The natural order was something they earnestly believed and ‘tradesmen’ such as Chippendale were often treated poorly, condescended to and bullied and very long intervals often elapsed between payments for their work.

The elite thought of him/or herself as a patron dispensing bounty. It was what they had been brought up to believe and didn’t really question it. Chippendale’s surviving letters reveal he reacted by displaying the required subservience and by offering expressions of gratitude.

Chippendale more than likely accepted these values as he had to make his way in the world. In this era you needed to dedicate your book to a belted earl or a royal personage, go in for a little smuggling, or take part in a rigged auction. It was all part of the game and none of the activities would have harmed his reputation for skilled design and craftsmanship. He was a businessman in a fiercely competitive trade and did so effectively enough, although without it seems, dying rich. He’s just made many people wealthy since because of his generosity. 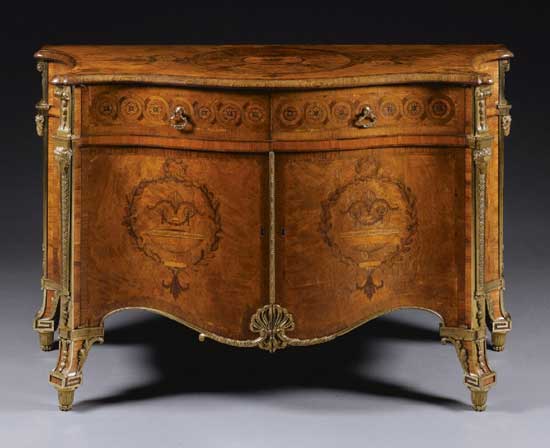 The route to success was publication. Published designs advertised the skills of the cabinetmaker, competing for work in a lively and sometimes ruthless market. The effect of these design books was also to promote the spread of new ideas with the consequence that there was always the pressure to come up with something new.

In 1754 Chippendale published his book of his designs for furniture, the Gentleman and Cabinet Maker’s Director upon which much of his fame rests. It served two purposes: first to inform likely patrons of the styles available to choose from; secondly and most importantly, it contained working drawings of furniture for other cabinet-makers to reproduce, complete with measurements, precise details of mouldings and construction.

If they were going to copy his ideas, the highest form of flattery, Chippendale needed them to have good guidelines so they they would get it right. Today it certainly reveals the excellence of his designs and his flexibility in adapting his designs to the changing vagaries of fashion and the architectural and decorating styles of his times.

Furniture that has been proved to be made by the hands of Thomas Chippendale has today attained almost rock star status. It is easy to understand why when you look at the sheer quality of what he produced.  His attention to detail has become renowned and is in reality quite breathtaking. The commode at Sotheby’s, which is only attributed to his workshop, certainly displays masterful marquetry work and its gilded mounts are very fine. But is it by Chippendale? To offer a comparison we must turn to the most sumptuous commode that is known to be by Chippendale and his workshop by having supporting documentation.

Entitled the Diana and Minerva Commode when it was made in 1773 for Edwin Lascelles of Harewood this amazing piece originally cost 86 pounds. It is like a ‘grand dressing table’ and during a recent restoration at Harewood House a few years ago it was placed back into the State bedroom where it was originally part of a suite of furniture made specifically for the room.

On the facade it depicts the two Roman goddesses, Diana and Minerva, which are depicted in marquetry (inlaid timbers) and ivory on its doors. They are disposed looking towards each other as pair would be placed. (A pair is not two the same but two mirrored). The commode carcass is made of mahogany, oak and pine, and then the whole is veneered with luxurious satinwood and inlaid with many other exotic timbers. 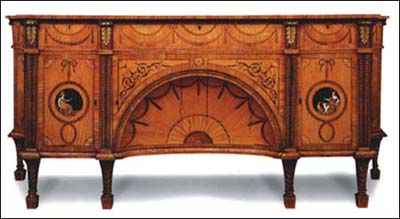 Satinwood was a timber making its presence felt in the second half of the eighteenth century in England. It provided a suitable ground for inlaid decoration and was highly valued among cabinetmakers. There are two types of satinwood from the West and East Indies respectively.  West Indian was used as a veneer on quality furniture between 1770 and 1810 when a violent storm destroyed the remainder of the trees.

It bears a strong resemblance to mahogany in its figure and when left unpolished is distinctly golden yellow. East Indian satinwood is also golden yellow, harder and heavier with a pronounced stripy figure which moves easily in different lights. Introduced into Britain late in the eighteenth century it is rarely however found in furniture of that time, although it was used in furniture made between 1880 and 1920. This fact often provides the clue in recognizing reproductions of eighteenth century pieces.

It will certainly be interesting to follow what the dealers in the antiques trade have to say about the piece Sotheby’s is attributing to Chippendale and to see what the commode finally fetches at auction on December 7th, 2010.

From an informal bistro at Paris to a bistro and bar in Melbourne Australia, a fine meal with those you love in any setting is a penultimate celebration of life