Just as our friends in the northern hemisphere are enjoying the renewal that is heralded by the arrival of Spring, in Australia Autumn arrives, offering a transitional period for contemplation. This usually follows a long hot summer, where floods and bushfires rage and ravage the land and for the summer of 2013 | 2014 this was definitely the case.

Until the winter arrives, with welcome relief, Autumn punctuates our lives and gives a moment for pause, helping us refocus our energy. We can smell the last blooming of roses as we admire the warm rich colour of deciduous trees as they begin to shed their summer growth and finally shut down to replenish themselves.

All over Australia the local colours of flame coloured red, deep and richly burnished orange, and a bright punctuating golden yellow allows intense study of the glow of foliage, which is observed even better in the gentler rays of the seasonal sunlight. This winter in Brisbane, the capital of Queensland they will enjoy a ‘Harvest’ festival of a very different kind, through an exhibition and film program on offer at the Gallery of Modern Art (GOMA).

The show explores food as a subject for contemporary art – June 28 to September 21.

Now is the time to note this in your diary if you are a local, or to consider planning your trip to the sunny north in winter.

Northern Queensland, especially, is a wonderful place to enjoy a time of respite in Southern Australia’s winter, enjoying the fruits of its balmy clime, while savouring some very special repasts.

All over the western world for some time now we have been used to our prosperity being driven by a ready supply of good food and powerful images of food and the harvest have helped influence our perceptions.

Autumn is the time to reap what we have sowed and to gather the crops so essential to daily life.

This show will examine the production, consumption and symbolism of food over the centuries, examining and considering our ideas about food. History proves they have constantly ebbed and flowed like a tide, from north to south following the spice trade from Africa to Asia and the Americas, as well as all the way to Australia today.

From rice farmer to gleaner, factory worker to housewife, the role of food as a symbol of status and prestige through exclusivity or sheer excess will be a consideration.

GOMA particulary focuses on the art of the 20th and 21st centuries. The show at GOMA will draw on both the historical and contemporary collections of QAGOM to consider the social, political and aesthetic implications of food production, distribution and consumption. 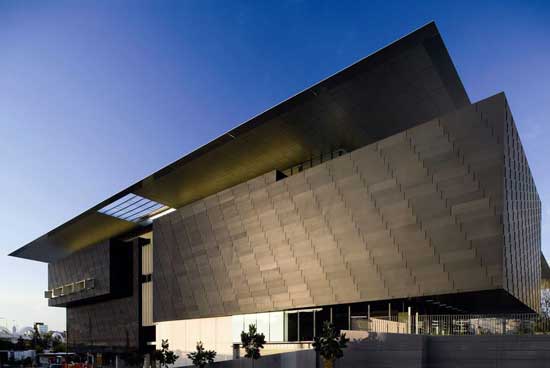 GOMA is part of a bigger picture, which includes the original Queensland Art Gallery. Both institutions formed under the umbrella QAGOMA in the last decade to better assist their growth and future initiatives. This arrangement came into being when Tony Ellwood, now Director of the National Gallery of Victoria, was in charge from 2007 – 2012. He brought them together, ensuring QAGOMA became the most visited gallery in the country with attendances hitting 1.8 million annually in 2010.

At some time or another at school, at college or university many of us have encountered the genre of Dutch ‘still life’ painting. During the 17th century in Europe the fashion for capturing food on canvas began in the Low Countries and spread to many countries, first to Germany, then on to France, Italy and Spain.

Dutch painters imbued their works with a quality of reality that was sustained, not only by wealthy art collectors, but also by floriculturists and scientists too. Paintings at this time served two functions, one that was decorative and one that was meant to issue a moral lesson. Symbolism reinforced ideas that were put forward in the literature of the period.

Curated by Ellie Buttrose, Harvest at GOMA in 2014 will feature more than 100 works, many of which are new acquisitions, including works by Aboriginal and Torres Strait Islander artists. Evelyn McGreen’s spirit basket linocuts and Emily Kame Kngwarreye’s yam dreaming paintings will garner many admirers. Xu Zhen’s ShangART Supermarket 2008 will recreate a fully stocked convenience store in the gallery space. This prolific and controversial Shanghia born and based artist has an ability to work in various disciplines and mediums.

This work is meant to help us to reflect on wider notions of value, meaning, economic status, consumer-driven desire and the significance assigned to certain practices and items within society.

GOMA’s Australian Cinémathèque will host a major cinema program in parallel with the exhibition. ‘Harvest: Food on Film’ will explore the pleasures and politics of food. This program offers stories that will touch on cultural identity, deprivation and nourishment, while highlighting the importance of our presence at the daily dinner table in cementing and shaping human relationships.

He has become renowned for being a headliner on the news, depicting humankind during its best and worst moments including moods of apocalyptic crisis.

Danish trio Superflex’s video documents the inundation of a replica fast food restaurant in Flooded McDonald’s 2009. Peter Greenaway’s much loved and wickedly sensuous The Cook, The Thief, His Wife and Her Lover 1989 will be sure to be well attended as will the spiritually nutritious Babette’s Feast 1987 It is the culinary dimensions of our cultural diversity that help make Australia the cosmopolitan, dynamic and exciting place it is to be today. Nearly 6 million immigrants have arrived in Australia over the past 55 years. Nearly one in five Australians today were born in another, country while over half of those living in Sydney, Melbourne, Perth and Adelaide are first or second-generation immigrants. Many of our  immigrants in the colonial period, the industrial age, following World War I and World War II opened restaurants, cafes, food shops and grocery stores. Their ethnic entrepreneurship led to vital urban renewal in many cities, helping to shape our economic growth and success significantly.

Shows like Harvest at GOMA are indeed important in revealing just how the Australian economy is indelibly linked to the good health and well being of our society, how important social change is, and the contribution that food makes locally, nationally and internationally.

Important community events like The Melbourne Food and Wine Festival, which is all about the ‘art of the table’ not only contribute to further development of the culinary industry in Victoria, but beyond that to all our states, as we share its many culinary delights and experiences.

Australia certainly has a fascination with food – la cuisine enchantée

Tourists visiting such festivals, whether from interstate or internationally, all carry home fond memories of particular dishes and chefs they admired.

This ensures that the wonderful phenomenon we know as ‘six degrees of separation’, which ultimately link us all globally means we are being constantly tantalized by the idea of some spectacular feast or another created by a talented chef in some far off clime. In 2014 a visit to QAGOMA at Brisbane where your mind will be able to feast on a powerful program of imagery will be a rewarding and fruitful experience. Brisbane is a creative city, one of great optimism… an active crucible for change.

It is Australia’s third largest city with a robust cultural life. It was founded in 1859 on the hopes of a people whose visionary leaders looked to the future daring to imagine and plan for what it might be possible to achieve.

Must say that I enjoyed very much the privilege of living there for just over a decade 1999-2009. During that time I lived in a city paradise with endless azure blue sky days and in a place where the people themselves could easily be likened to a wonderful harvest; full to overflowing with nourishment and goodness. The Abbot Suger at St. Denis near Paris developed the Early Gothic style of architecture from 1137. It was a system of great structural ingenuity and Suger is attributed with inventing the pointed arch and pioneering the use of glass in a high range of clerestory windows to the south…