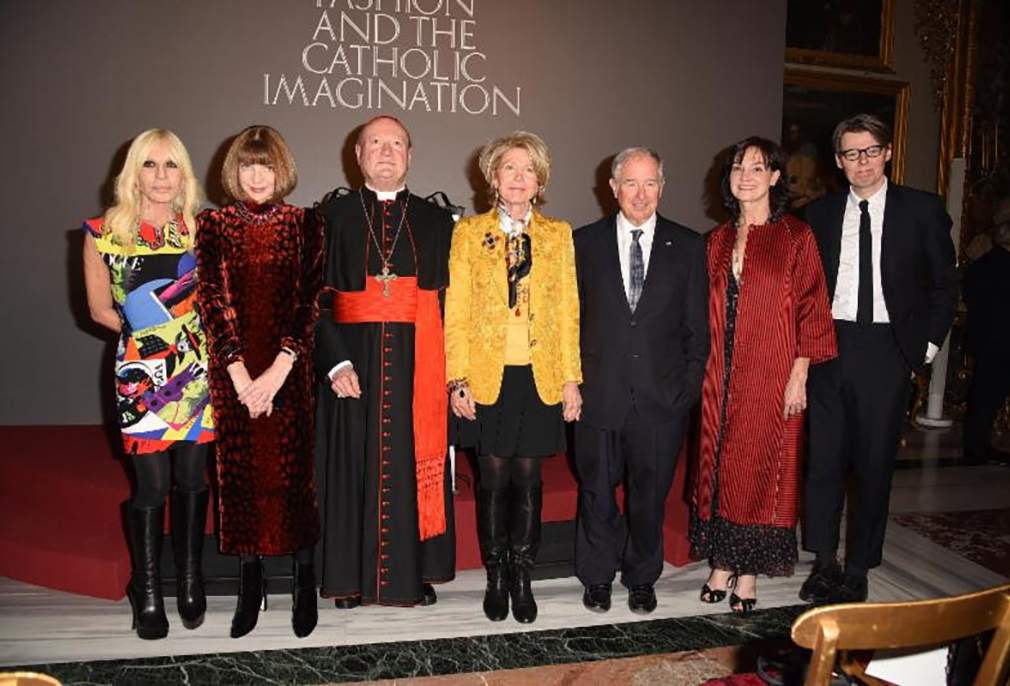 The prestigious Costume Institute has announced their Spring Fashion offensive in New York, including the annual Costume Institute Benefit, which provides their main source of annual funding. The invitation only Gala Benefit will be hosted on May 7 by Co-Chairs Amal Clooney, Rihanna, Donatella Versace, and Anna Wintour, alongside Honorary Chairs Christine and Stephen A. Schwarzman. 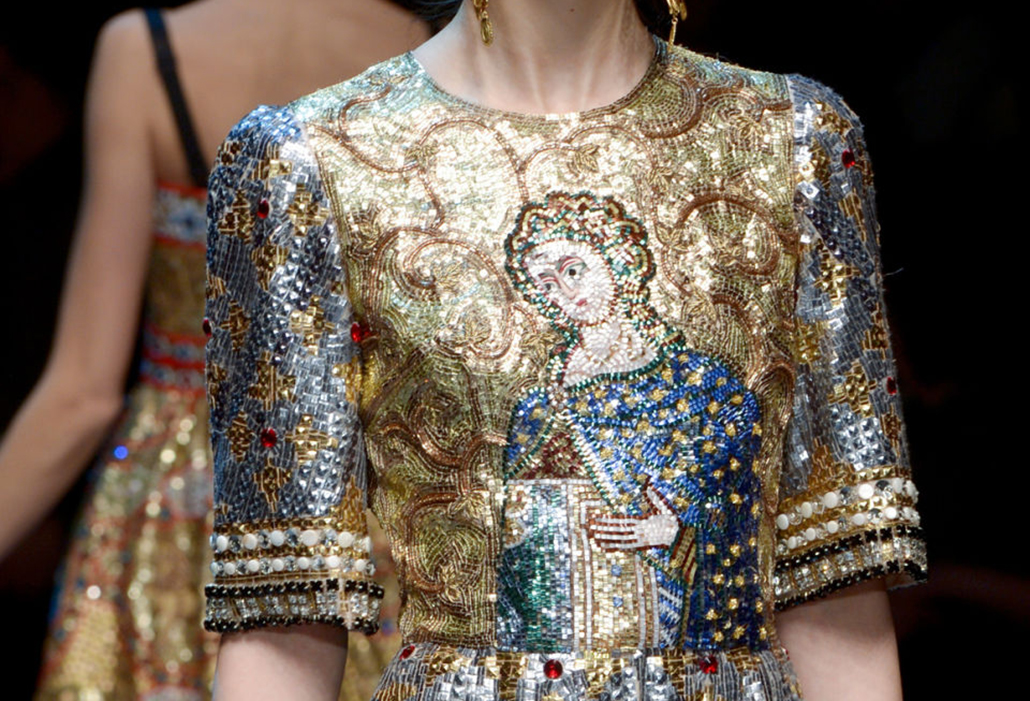 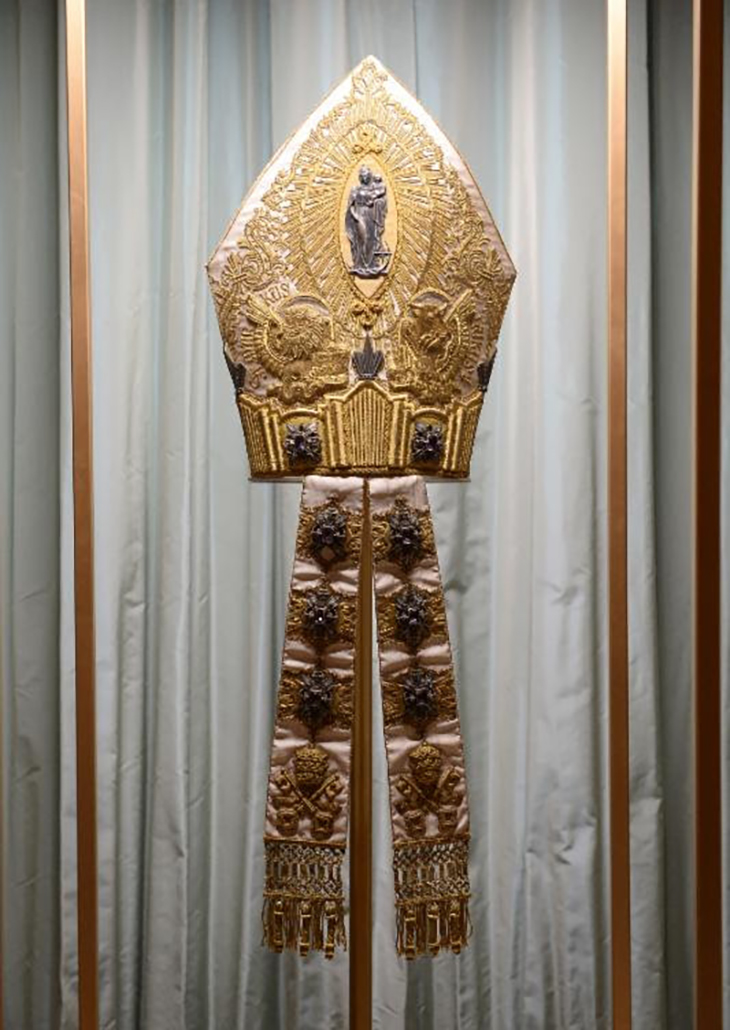 Mitre of Pius XI on display at The Met’s Heavenly Bodies: Fashion and the Catholic Imagination advance press event. Courtesy of The Metropolitan Museum of Art/@spgitalia

The show will be on view May 10 – October 8, 2018 in two  of The Metropolitan Museum of Art locations – The Met Fifth Avenue in its medieval galleries and Anna Wintour Costume Center, as well as uptown appropriately, at the fabulous The Met Cloisters.

In particular there will be a plethora of fabulous garments and accessories modern and contemporary showcasing how designers have been inspired by the imagery of Catholicism. There will also be many talks and other events associated with the showing, with the museum declaring it is keen to promote ‘constructive dialogue’ in what is sure to be a controversial event.

The exhibition will be themed to expand people’s knowledge of the devotional practices and traditions attached to the Roman style worship of Catholicism and the ecclesiastical garments developed over the centuries to be worn by the clergy. The earliest vestment will be a mantle worn by Benedict XIV, and the latest a pair of red shoes worn by Saint John Paul II (1920-2005).

The list of renowned designers involved in the show is mind boggling*, and it is interesting to note Papal officials requested the historic garments on show be separated from works by modern and contemporary designers, which are inspired by fashion and faith. 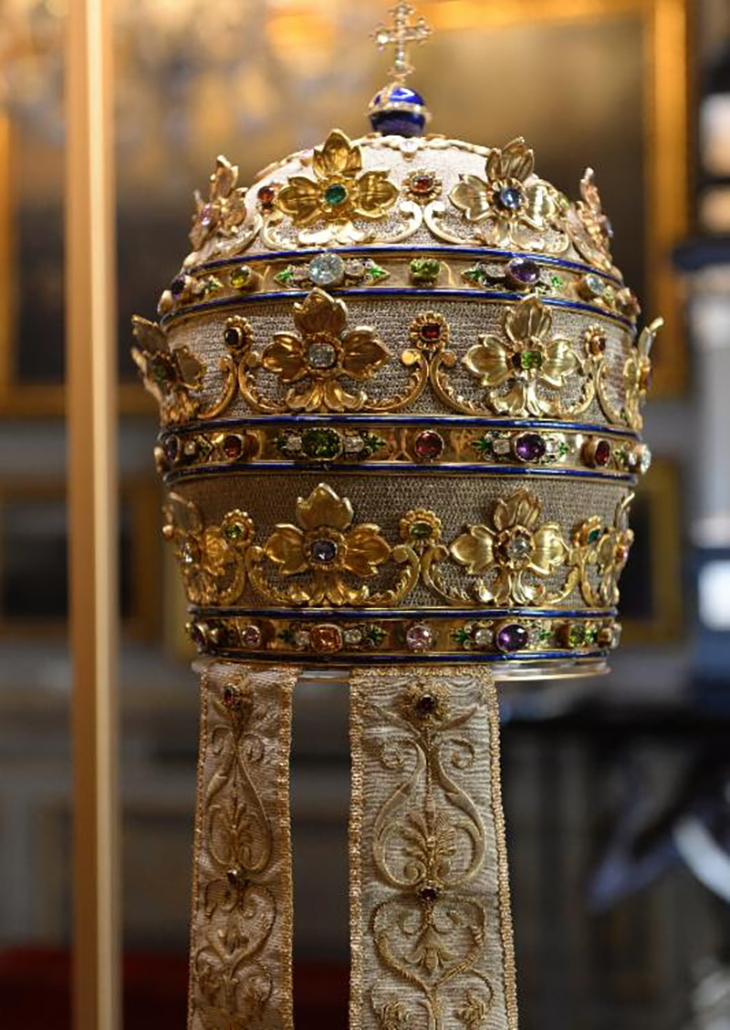 Tiara of Pius IX on display at The Met’s Heavenly Bodies: Fashion and the Catholic Imagination advance press event. Courtesy of The Metropolitan Museum of Art/@spgitalia

The Vatican will be lending the Tiara of Pius IX, the Mitre of Pius XI and some 150 ensembles, including 40 ecclesiastical masterworks from the Sistine Chapel sacristy.

They will include papal vestments and accessories from the eighteenth to the early twenty-first century, documenting some fifteen papacies… with a suite of 12 vestments commissioned by Empress Maria Anna Carolina of Austria for Pius IX taking a star turn. 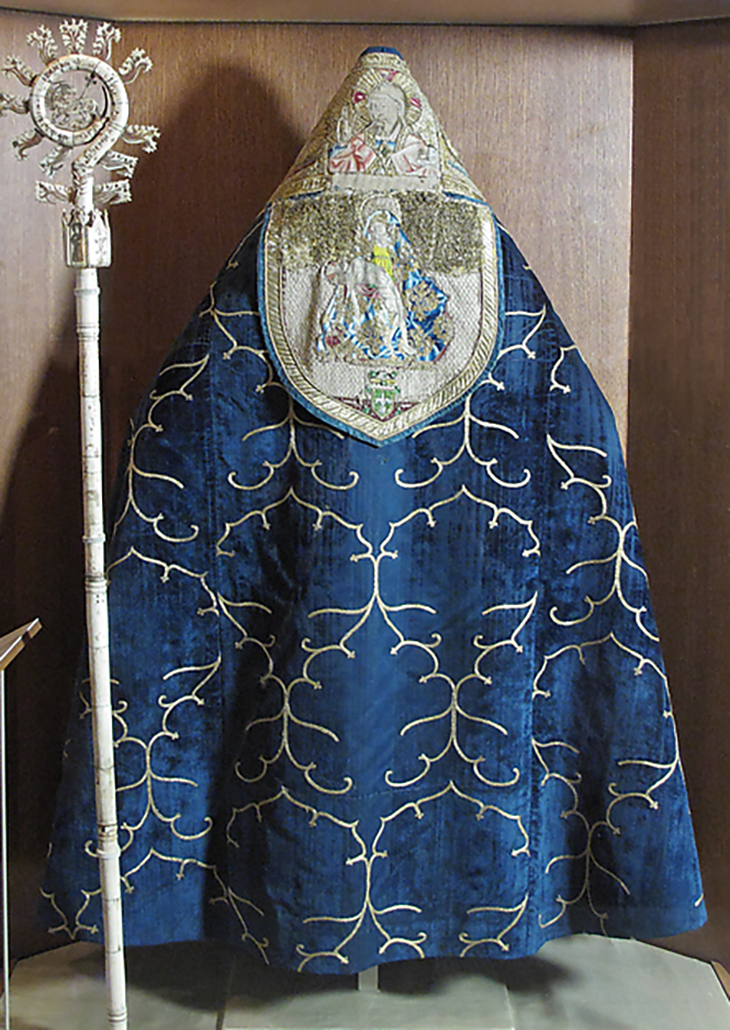 The presentation will examine the garments and their design within the broader context of religious artistic production, analyzing a ‘… connection to the historiography of material Christianity and their contribution to the construction of the Catholic imagination’.  “The Catholic imagination is rooted in and sustained by artistic practice, and fashion’s embrace of sacred images, objects, and customs continues the ever-evolving relationship between art and religion,” said Daniel H. Weiss, President and CEO of The Met. “The Museum’s collection of Byzantine and western medieval art, in combination with the architecture and galleries that house these collections at The Met, provide the perfect context for these remarkable fashions.”

An apprehension of the divine is central to understanding that period in world history after the fall of Rome until the fifteenth century in Italy, when the growth of newly espoused humanist ideals would begin to change society forever.

Fragments of textiles, stained glass and man and varied objects in museums today reveal how during the Middle Ages, the majority of the population because they were illiterate and unable to read the written word, gained an understanding of their world through imagery.

Michelangelo: The creation story, ceiling of the Sistine Chapel in Vatican City, Rome

Subsequently their powers of observation were developed to be far more acute than ours are today. The symbolism woven into or embroidered on textiles was of major significance, because they conveyed a message, moral or otherwise, about the glory and welcome abundance of creation.

During the Middle Ages, various councils and synods attempted to regulate clergy dress, both outdoors and indoors, and it became an obligation for those in holy orders to conform. By this time styles, types and use of ecclesiastical vestments were more or less established and embroidered work free to take on broader terms of reference. 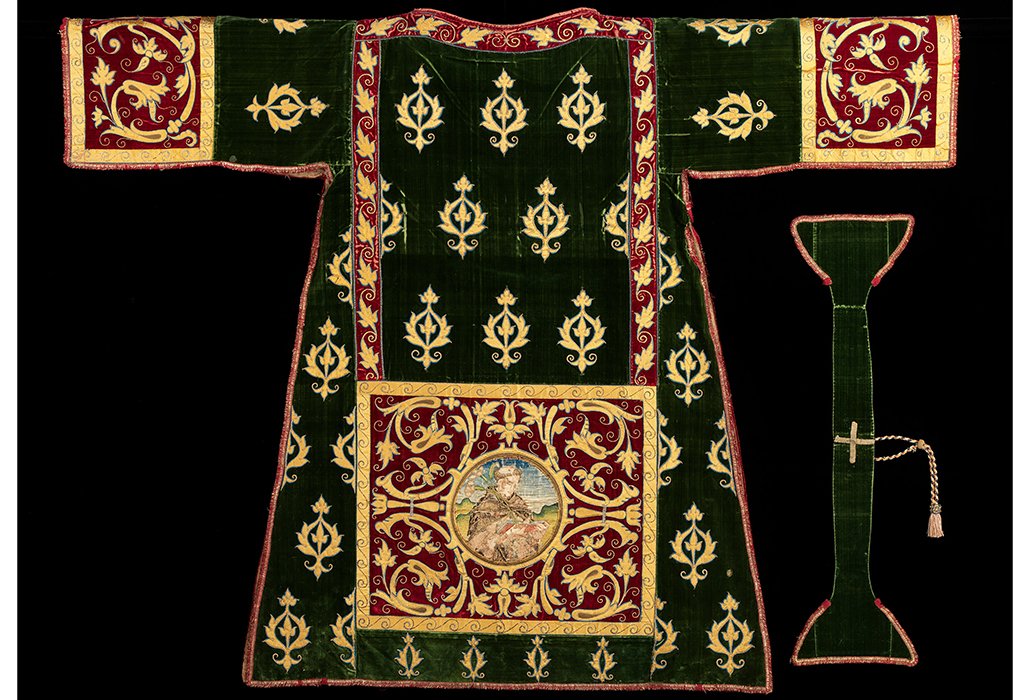 The wearing of garments designed and worn for religious rituals gradually became a method of gaining the trust and respect of others. From about the thirteenth century onward great suites of vestments were produced from the same fabric i.e. the Dalmatic, Tunicle, Chasuble and Cope.

A beautifully crafted and ornate example of a dalmatic in The Met’s collection features embroidery of the saints, which is artfully rendered: the facial features, skin tones, hair, and such fine details as the definition of the fingers, are executed so delicately as to be mistaken for painted work.

The curator says ‘Ecclesiastical garments were meant to contribute to the sense of mystery and awe associated with worship; this opulent dalmatic exemplifies that custom’. Fashion in Italy, Europe and England from the period known as the Renaissance onward (1300 – 1700) was imposed on costume, dictating and reflecting the changes and concerns of a society in any one place at any one time.

Since economics most often determine the development of the societies in question, its study cannot be neglected in this regard.

During the fifteenth and sixteenth century in Italy, a great outpouring of art and economic growth was reflected in the textiles worn. The Tunicle was at first a simple garment worn by a Bishop of the Church under the Dalmatic and Chasuble. 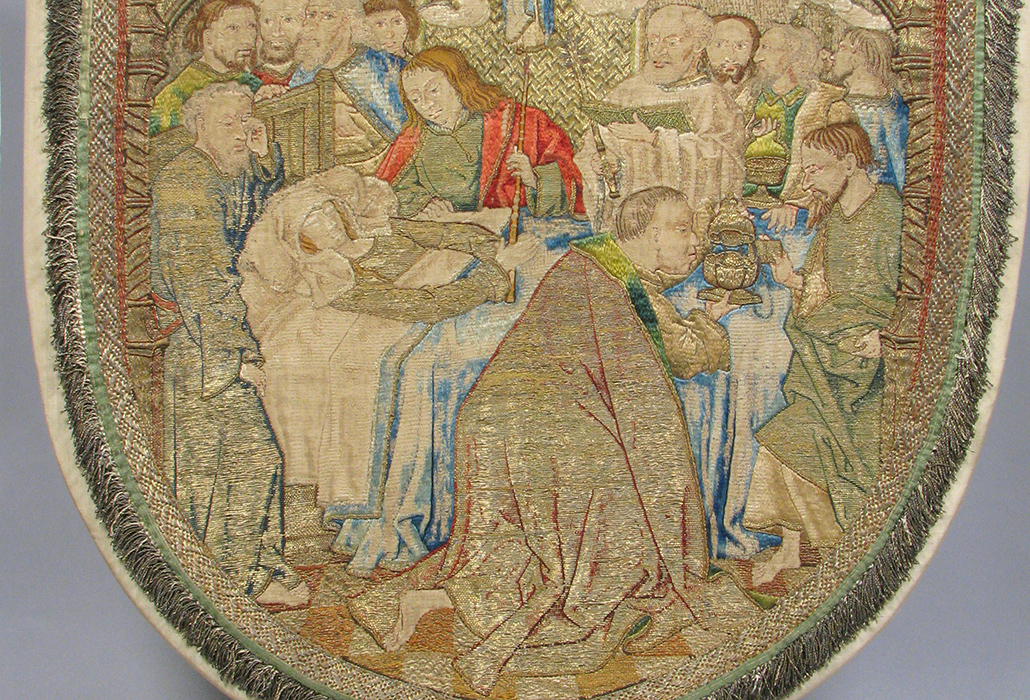 Although originally plain, the Tunicle eventually followed the Chasuble and Dalmatic and became richer and more elaborate when embroidered.

With no real intrinsic liturgical significance, the Cope, a type of cape worn by a priest in religious ceremonies, lent splendour and magnificence to great feasts and ceremonies. It became an important addition worn by the principal officer at the Mass and in procession. As the Church in Europe prospered and grew the changes that occurred in vestment attire became more or less set in time.

The Chasuble, the vestment worn by the priests during the mass with their stole, continued as a great vehicle for display with added bands of woven or embroidered textiles, and in some instances, gems and pearls, enamels and semi precious stones were used as well as embroidery.

The interest in all these garments is today based on their historicity, and the fact that throughout the ages embroidering and the weaving of fabulous textiles has been and is many ways is still a powerful transmitter of wealth and status.

It is also a measure of the development of individuals who made the garments and their work practices in society. They had to master from childhood a very refined skill by hand and take it to a highly sophisticated level. 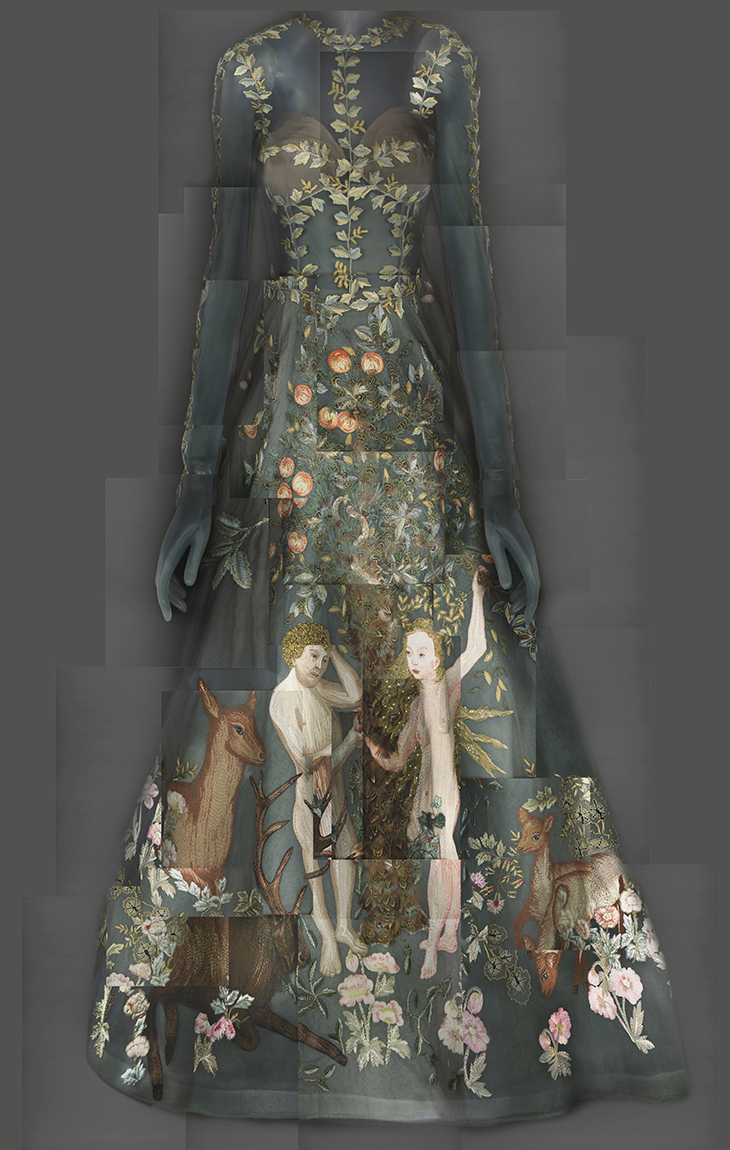 It was only during the industrial revolution of the late nineteenth century, when machines took over the task more efficiently and more economically, with all but a select few resigning themselves to changing times.

A collaboration between The Costume Institute and the Department of Medieval Art and The Cloisters, the Heavenly Bodies exhibition has been organized by Andrew Bolton, Curator in Charge of The Costume Institute. Making the announcement in New York Andrew Bolton said “Some might consider fashion to be an unfitting or unseemly medium by which to engage with ideas about the sacred or the divine. But dress is central to any discussion about religion; it affirms religious allegiances and, by extension, it asserts religious differences.”

It also references and asserts the power of position in society.

It’s good to remember Jesus was a very humble working man, who offered a simple message about love and forgiveness to followers of his way of life. During his own lifetime he wore plain homespun garments while working as a carpenter at Nazareth in his father Joseph’s house, and then travelling the road talking to people until he inevitably found himself being crucified on a hill at Calvary, sent there by those who were threatened by his ideas. 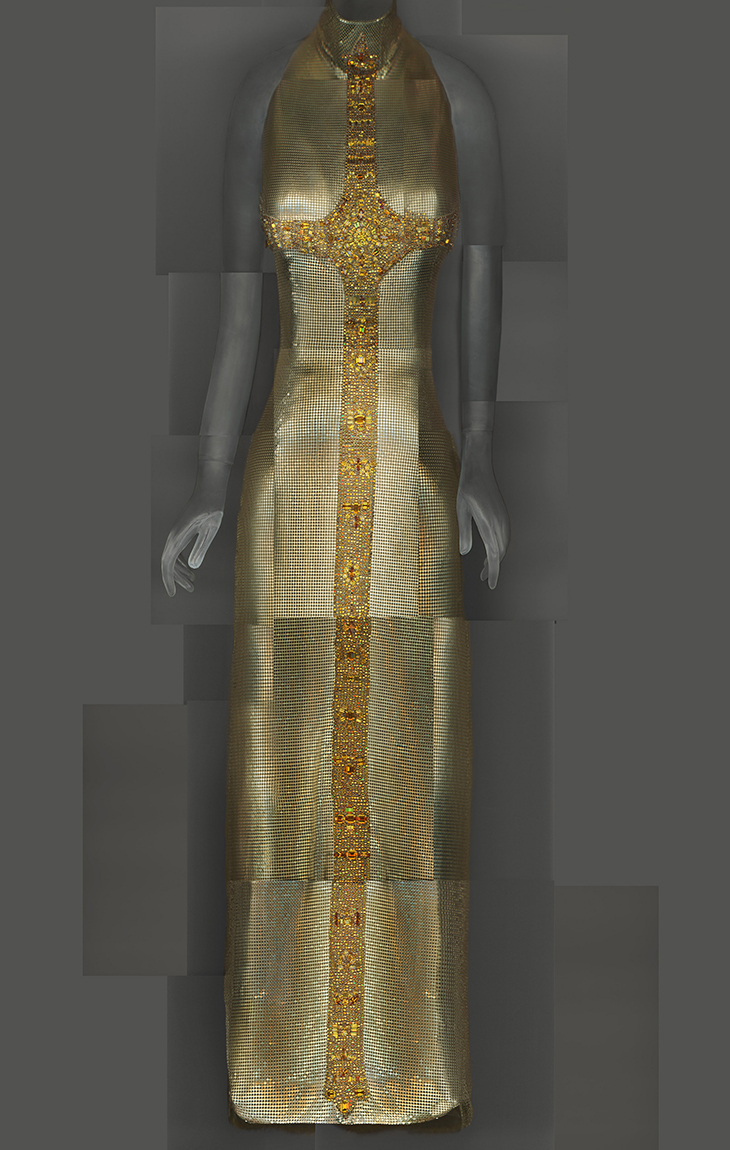 Andrew Bolton has been working with his colleagues in The Met’s Medieval department: C. Griffith Mann, Michel David-Weill Curator in Charge of the Department of Medieval Art and The Cloisters; Barbara Drake Boehm, Paul and Jill Ruddock Senior Curator for The Met Cloisters; Helen C. Evans, Mary and Michael Jaharis Curator of Byzantine Art; and Melanie Holcomb, Curator to bring the display, which is sure to start many a challenging conversation, to fruition. 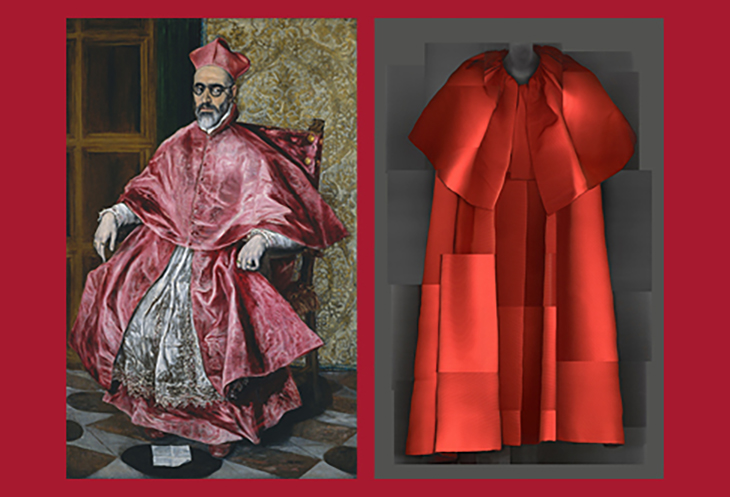 The Met Fifth Avenue and The Met Cloisters

Diller Scofidio + Renfro (DS+R), the interdisciplinary architecture and design firm, will create the exhibition design with The Met’s Design Department. Raul Avila will produce the gala décor, which he has done since 2007.

The exhibition is made possible by Christine and Stephen A. Schwarzman, and Versace. Additional support is provided by Condé Nast.

A publication by Andrew Bolton will accompany the exhibition and will include texts by authors David Morgan and David Tracy in addition to new photography by Katerina Jebb. It will be published by The Metropolitan Museum of Art and distributed by Yale University Press.

*The list of designers involved in the Heavenly Bodies exhibition;

It was in the twelfth century liturgical colours were set down first as special to a season of the church. The colours established were –

Black: Worn at Masses for the Dead on Good Friday (the Christian holy day observed on the Friday before Easter, commemorating the death of Jesus on the Cross – Crucifixion). The trim could be silver, not gold).

White-Gold: Colours to celebrate Christmas, Easter and Epiphany (a Christian festival observed on January 6, celebrating the divine manifestation of Jesus through the Three Wise Men’s visit, or as in the Eastern Orthodox Church, the baptism of Jesus).

White: For Purity, worn at the Feast of Virgin Mary; virgin saints

Red: Apostles, martyr saints (except female virgins) Pentecost (a Christian festival celebrated on the 7th Sunday after Easter that commemorates the descent of the Holy Spirit upon the apostles – called Whitsunday in England, Shabuoth in the Jewish faith where it commemorates the Law being given by God to Moses on Mount Sinai).

Violet: Lent (the period of 40 weekdays before Easter observed as a period of prayer, penance, fasting and in some churches, self denial) Advent (the four week period leading up to Christmas, beginning on the fourth Sunday before Christmas Day) and Rogation Days (three days before Ascension day)

Green: less traditional, but served as the all purpose colour and to represent the Trinity (the condition of existing as three persons or things.

Blue: No liturgical significance but a popular colour associated with churches named for Mary because it was a colour designated during the Byzantine period as being associated with her holiness.

Touring the Archibald Prize Winner and Exhibition of the finalists throughout regional Australia is such a great idea. The Archibald is awarded for the best portrait, preferentially of some man or woman distinguished in Art Letters Science or Politics, which has been painted by an artist resident in Australia during…