Anthony Van Dyck’s portraits of England’s King Charles 1 and his wife Henrietta, hanging together on red walls at the National Gallery of Victoria for the exhibition Masterpieces from the Hermitage: The Legacy of Catherine the Great

Catherine II (1729 – 1796), Empress Catherine the Great of Russia gathered great beauty around her in her original ‘hermitage’, a haven for security and private life which she constructed as an extension of the Winter Palace in St Petersburg after she became ruler

The Hermitage, now a complex of six buildings, houses some of the greatest art treasures in the world 400 + of which are now on show at the National Gallery of Victoria (NGV), the Melbourne Winter Masterpieces exhibition Masterpieces from the Hermitage: The Legacy of Catherine the Great until November 8, 2015.

Whatever you say about her, Catherine the Great (Yekaterina Alekseyevna – Sophie Friederike Auguste, Prinzessin (princess) von Anhalt-Zerbst) ensured that some of the greatest masterpieces of European and English visual art in the world remained intact for many to see.

Australians and International visitors are invited to cross all cultural divides and view this extraordinary collection of fine visual arts being showcased up close and personally.

It is hard to imagine we would ever enjoy viewing some of the gems of that collection, including works by the Da Vinci School, Claude, Rembrandt, Rubens, Titian, Godfrey Kneller, Velazquez and many more, down under. This is a virtuosic display.

Some of the works on show originated in the internationally renowned Walpole Collection from England.

Gathered together by Sir Robert Walpole, they are integral to Catherine the Great’s arts and cultural legacy.

The works that belonged once to the 1st British Prime Minister in history Sir Robert Walpole, 1st Earl of Orford (1676-1745) is only a selection of the 198 paintings all master works that used to hang on the walls of his country house Houghton Hall during the first half of the eighteenth century.

The 3rd Earl Orford, Sir Robert’s grandson for more than 40,000 pounds, sold them in 1779 to Catherine Great. This was a huge sum of money at the time, horrifying the English notables who did their best to block the treasures leaving the country.

The Russian ambassador to Great Britain, Alexey Musin-Pushkin, who organized the valuable purchase, wrote to Catherine the Great ‘…the greater part of the nobility here are displaying general dissatisfaction and regret that these paintings are being allowed out of this country, and are setting in train various projects to keep them here’.

However sometimes needs must.

Who would have also thought we would see a portrait of King Charles 1 (1600-1649) and his wife Henrietta Maria of France painted by the revered Flemish portraitist Anthony van Dyck (1599-1641) hanging nearby the portrait of an English immigrant, one who made a name for himself carving in timber. 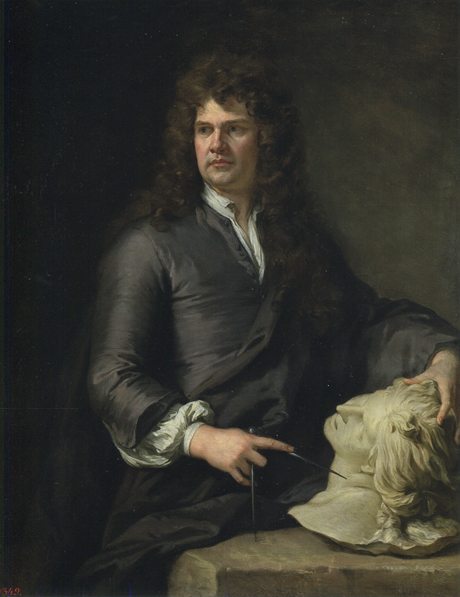 This portrait for me stood out for many reasons … it’s a lesson for us all in that in looking at art, we must also venture beyond what the mind can see if we wish to understand it in historical context.

The wonderful portrait of sculptor and wood carver Grinling Gibbons may lack the grandeur of the paintings around it, but it gives us an insightful glimpse into the solid character of a man the eighteenth century diarist Horace Walpole, the son of Sir Robert Walpole said,

“There is no instance of a man before Gibbons who gave wood the loose and airy lightness of flowers, and chained together the various productions of the elements with the free disorder natural to each species.”

The link between Gibbons and the former King comes through his son King Charles II who when he was restored to the throne of England became Grinling Gibbons premier patron.

Horace Walpole also called him a ‘citizen of nature, the sculptor who became most renowned for his carvings in wood. Grinling Gibbons (1648-1720) succeeded way beyond what King Charles himself could have perhaps possibly imagined when he offered him his patronage. We also need to know that following his restoration to the English throne Charles II (1630-1685) encouraged artists like Gibbons to come to England. At Petworth House in West Sussex in the gallery Grinling Gibbons intricate woodcarvings outline portraits of history’s most famous celebrities. His ornamentation, a symphony in virtuosity.

He wanted to inspire young tradesmen because so many men who would have been their masters and mentors had perished during the wars of the Commonwealth under Oliver Cromwell, which had raged between Charles 1 and his reign.

Gibbons was such an inspiration that he has over the centuries since, continued to inspire those who seek to create in wood masterworks of carving.

Recorded for posterity by the leading Baroque portraitist in England during the late 17th and early 18th centuries Sir Godfrey Kneller (1646-1723), the most famous of all workers in wood during his age Grinling Gibbons is a man sure of his own worth, despite the austerity reflected in his portrait’s surrounds.

Gibbons has an air of confidence about him depicted wearing the full cascading wig of the times embraced by the nobility.

It is an abundant contrast to the simple understated outer garment he is wearing, which although subdued in colouring has clearly been designed for a creative man.

If we look closely enough we can see that it is more than likely made of silk, not the sort of fabric a plain man from a his background would normally be wearing at that time.

It heralds the success of a man who would never forget his more modest origins, despite working for the richest people in the land, gaining both their respect and admiration.

Born in Holland, Grinling Gibbons came to England in 1667.

This was at a time when an outward image of sobriety and simplicity was a guarantor of national independence and success in his own country. Charles II kick started his career, which began on 18 January 1671 when he was discovered by diarist John Evelyn carving a copy of Tintoretto’s Crucifixion in a thatched house in a field near Deptford. “I perceiv’d him carving that Cartoone or Crucifix of Tintoreto, a copy of which I had also my selfe brought from Venice, where the original painting remaines…” he wrote, …”the work was very strong, but in the Piece about 100 figures of men etc…”

Within a few weeks Evelyn who enjoyed an excellent reputation at court, had arranged that Gibbons would be introduced to King Charles II (1630-1685).

Born in Germany Kneller studied in Amsterdam with Ferdinand Bol, a pupil of Rembrandt’s before travelling to Italy in 1672, arriving in England in 1674-5 where he became famous after painting Charles II, becoming principal painter to the King.

With his royal connections expanding Grinling Gibbons completed extensive private commissions at Windsor Castle, other royal palaces, St. Paul’s colleges at Oxford and Cambridge and many of the great English country treasure houses. Detail of the carving on the reredos of St James’s Church, London

Appointed Master carver in 1693, Gibbons was employed by Christopher Wren to work on the choir stalls and organ case at St Paul’s Cathedral. He also decorated with fine lime wood drapery the reredos, or screen behind the altar of one of Wren’s Churches in St James’s.

It displays the virtuosity of his works in wood.

So successfully did Gibbons revive local wood workers skills, that by early in the seventeenth century they were achieving new heights of technical skill. However it is the amazing lace cravat he made for Horry Walpole to ‘wear’ at Strawberry Hill that captures many imaginations.

Given as a thank you to his most delightful and perhaps endearing patron, who had employed him to enrich carvings by others, it has remained with all his other works as a standard for others to work towards.

Catherine the Great, your legacy continues to live on with the stories your great works of art tell to all the people of the world today, if they but come to look and listen.