Great, grand, glorious; all superlatives that are applicable to the current exhibition Masterpieces from the Hermitage: The Legacy of Catherine the Great at the National Gallery of Victoria (NGV).

Adding sublime to this list completes the description of the 500+ exquisite works on show by artists and artisans sourced from St Petersburg’s internationally renowned Hermitage Museum.

Catherine the Great of Russia (1729-1796), a minor German princess born Sophie Friederike Auguste of Anhalt-Zerbst-Dornborg, at age sixteen changed her name when she married Grand Duke Pyotr Fyodorovich, heir to the Russian throne.

The marriage was not a happy one, Catherine, intelligent and hardworking, Pyotr who later became Peter III, was not interested in Russian culture or government.

He spent most of his time engaged in military games with drinking companions; officers from Holstein, his former home.

Peter III ascended the Russian throne in 1762 and from the outset was unpopular; his inappropriate and determinedly odd behaviour discredited him in the eyes of both the common people and the aristocracy.

After less than six months on the throne he was overthrown, his wife, Catherine, a chief conspirator in his downfall.

Through skilfull networking Catherine had gathered a group of influential supporters which included the military and upon her husband’s dethroning was declared Empress of Russia. Houdon’s Catherine the Great down under at the NGV, 2015

This was the beginning of a golden age for Russia.

Catherine the Great, characterized historically as an enlightened despot, believed in a form of absolute monarchy inspired by the Enlightenment; a period from the 1620s to the 1780s in which cultural and intellectual forces in Western Europe stressed reason, analysis, and individualism.

During this time the arts, sciences, and education were fostered and greatly encouraged by Catherine and most other rulers.

After putting the Russian economy and finances in order, Catherine the Great set about indulging her great passion – the collection of art: paintings, sculpture, drawings, porcelain, silver and objets d’art were sought out and assessed.

Catherine acquired works by contemporary artists, the old masters and with a particular interest in purchasing entire collections quickly gained a reputation as the foremost player in the fine art market of the time.

Perhaps, some of Catherine’s purchasing power may have been better directed to providing the Russian serfs with schools, housing and hospitals but what we have to take note of is that her purchases were the foundation for the Hermitage Museum’s wondrous art collection – a truly farsighted legacy from Empress Catherine to future generations.

The good news is: you don’t have to fork out thousands to visit the Hermitage in St Petersburg to view Catherine’s gift to the world; the National Gallery of Victoria has combined with the State Hermitage Museum of St. Petersburg and Art Exhibitions Australia (AEA) to present Masterpieces from the Hermitage: The Legacy of Catherine the Great. Now what do we have here… Janet Walker at NGV

No question, this is an exciting, enthralling show, the exhibition rooms decorated in a manner which enhance the exhibits, the ambience is one of excellence in art displayed in an elegant authentic environment.

Rarely seen outside the Hermitage walls they are undeniably accomplished and marvellous in execution, but for this reviewer the lesser known painters were the showstoppers. This seventeenth century painting by Frans Snyders – Concert of Birds made me smile with delight – it depicts species of singing and talking birds, portrayed giving a concert conducted by an owl with sheet music.

The birds include European and exotic birds, including a pair of peacocks, a parrot, a macaw, a heron, a swan, song birds, a toucan, an eagle, cockatoos and others – together with a bat in flight – whimsical and wonderful. Similarly Snyders, Cook at a kitchen table with dead game (oil on canvas) is still as vibrantly hued and textured as when it was painted around 1634.

The artist has portrayed both the result of a hunt and slaughtered domestic fowl.

A grey heron, partridges and small songbirds have been arranged on a table in front of a large wicker basket containing snipes, a pheasant and a partridge.

The cook, armed with a large kitchen knife, is bent over a low table threatening an opportunistic cat, which is doing its best to secure a tasty meal by pulling the heron down off the table (it is likely that the cook was painted by Jan Boeckhorst).

On viewing it I could smell the game and feel the cook’s anger at the marauding pussy-cat – amazingly immediate.

In modern times we rely on the camera or video to capture social settings.

These, not available in Catherine the Great’s era artists of the calibre of David Teniers II have brilliantly recorded how life was for people in those times. On display is Teniers’, Kitchen, oil on canvas, 1646. It portrays the everyday inhabitants (dead and alive) of a seventeenth century kitchen. The patron stands awaiting the fish being dragged along the floor by a workman anxious to catch his attention.

Carcases hang from the ceiling, dogs in abundance, fish is dropped from a basket to be washed and laid to rest on the floor.

A Health Department’s nightmare, the painting depicts the ordered chaos of an area devoted to food preparation and is wonderful in the breadth and depth of the sharply detailed environment. Exhibited are View of Pirna by the Sonnenstein Castle, oil on canvas, 1750s and View of the Zwinger in Dresden, oil on canvas, 1752. Bellotto, (c. 1721/2 –1780) also called Canaletto, was an Italian urban landscape artist, and printmaker famous for his highly detailed, usually large-scale paintings and prints of a cityscape or pastoral view of European cities (Dresden, Vienna, Turin and Warsaw).

He was the pupil and nephew of Canaletto and sometimes used the latter’s illustrious name, signing himself as Bernardo Canaletto.

Bellotto’s style was characterized by elaborate representation of architectural and natural vistas, and also the angle and brightness of lighting which illuminates the scene portrayed – quite extraordinary.

There are many more paintings that will intrigue and delight the visitor to this exhibition but a room not to miss is the room of cabinets. Displayed within cabinets set into the walls are a myriad of Chinoiserie, silver objects, porcelain, jewellery and toiletries. Objets d’art exquisitely fashioned, many of them were in Catherine the Great’s private rooms in the palace, their fragile beauty makes one wonder how they arrived unscathed to be exhibited with loving care in displays that take your breath away. 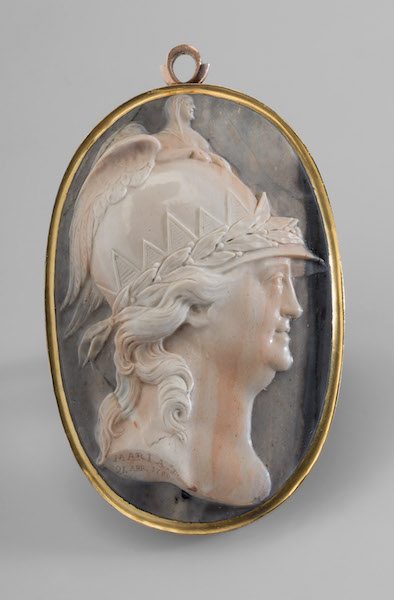 Before you leave you may like to re-visit the display of the magnificent Sevres dinner service, commissioned by Catherine for her lover Prince Grigory Potemkin?. It took Catherine 13 years to pay off – totally gorgeous, whatever it cost it was worth it.

Catherine the Great, a woman whose pleasant face and grandmotherly figure belied an intelligent, hardworking, important influence in the art world of her time is to be congratulated for superb taste in and acquisition of art treasures that reflect the very best artistic works of her time.

Masterpieces from the Hermitage: The Legacy of Catherine the Great at the NGV until November 8th 2015 – nothing more to say except: Great, Grand, Glorious.

All art is alive, all art is fun, all art is the art of now and all happening in the city at the heart and soul of Australian arts and culture – MELBOURNE NOW