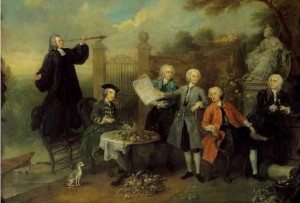 There was plenty of Hervey’s around in the eighteenth century in England. Felton Hervey was the ninth son of the 1st Earl of Bristol, Equerry to Queen Caroline of Ansbach and Groom of the Bedchamber to William, Duke of Cumberland. He features at the front of one of the best known paintings now in the Royal Collection alongside Sir Horace Mann, who became Envoy Extraordinary and Plenitopotentiary to the Duke of Tuscany for 46 years. 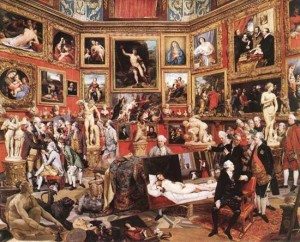 The Tribuna had been built in the Uffizi in 1585 to contain a selection of the most famous, exotic and precious works of art in the Medici collections. Queen Charlotte heard that artist Johan Zoffany was going to Italy in the summer of 1772. She commissioned him to paint the Florence Gallery and he peopled it with Englishmen and Scotsmen who had visited Florence while he was there, popping himself into a picture that is painted with unflagging energy and vitality. When it was exhibited at the Royal Academy in 1780 although the King thought that the ‘flock of travelling boys one does not know or care whom’ were an intrusion but Zoffany’s industry and imitative skill were universally admired. Frederick Augustus Hervey, son of Lord John, became the 3rd Earl of Bristol and Bishop of Derry. He was one of the eighteenth centuries most colourful English eccentrics and wore a grey poplin semi-soutane, girdled by a black silver spangled sash, with purple stockings covering his gouty legs, a costume he invented himself. He spent a great deal of his time on the Continent where he was thought to be an Irish Bishop by many Italians with the result that innumerable continental hotels were named after him. He invested in a large country estate and designed his house Ickworth following what he believed was dear impeccable Andrea Palladio’s rules. However the Earl-Bishop (1730-1803) was born far too late to be a Palladian and Ickworth, although as interesting and eccentric as the Bishop himself, certainly does not follow 16th century Venetian architect Andrea Palladio’s rules but only serves to demonstrate his individual style and love of classical taste. 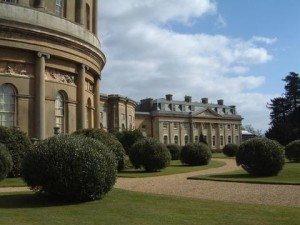 It was a severe attack of the gout that finally carried the dear old Bishop of Derry off to a higher power. There was a terrible muddle about gout and a vision of the pop-eyed, ill tempered, bewigged squire with his huge padded foot on a gout stool, a bottle of port in one hand and a walking stick for hitting out with another, is a popular image of the time.

The Musketeers from BBC 1 are as they should be, brave, dashing with extraordinary strength in vulnerability while revealing character flaws as heroes, fighting for honour, loyalty and love