Anti-heroes are very appealing. In another new BBC Drama – Hidden, our London correspondent reports British actor Philip Glenister fits the ‘old bill’ perfectly. He is one of those rare actors, who has appeared in every type of acting role available. 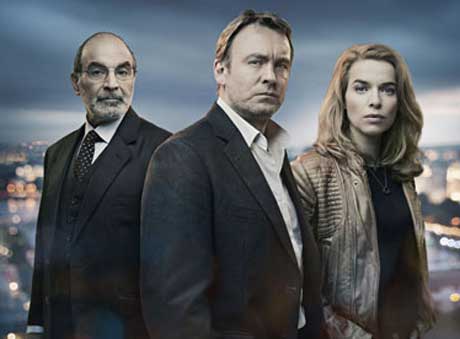 In ‘Hidden’ Glenister plays a solicitor who lacks the usual attributes that make a heroic figure, such as nobility of mind and a pure spirit, or a life or attitude marked by action or purpose, and the like. Instead he is confronting his own exceedingly very dodgy wrong side of the law past, which is shown in flashback.

He is also trying to sort out why a beautiful mysterious woman lawyer wants to hire him to help acquit a well-known criminal. As it turns out she has important and very sophisticated Judge father, played by a slimmed down version of Poirot, David Suchet.

He looks trim and terrific in a Savile Row dark blue pin striped suit. Suchet is another excellent British actor, whose subtle nuances of facial expression lead you to believe there is a lot more going on under the surface of all that charm. 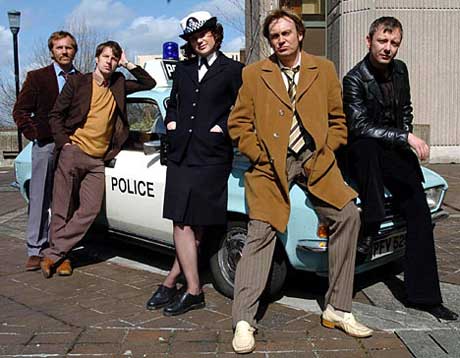 Glenister with his craggy lived in face was tailor made to play Harry Venn, a two bit solicitor from Soho who quickly finds himself caught up in a much bigger, and far more complex conspiracy than he imagined. Harry Venn is forced to continually come to terms with the many misdemeanours of his past so that he can work out what is happening in the here and now so that he can save the future of his country. It will take all of his skills to surmount the challenges that lead him deep inside the heart of the British political system, where Prime Ministers are either made, or broken.

But someone is on his side, otherwise why would they call to urge him to leave his 1st floor chambers quick smart and before they spectacularly blow up. 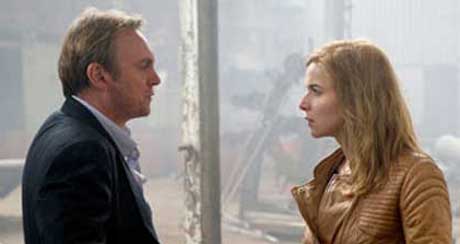 Thekla Reuten more recently played opposite George Clooney in the 2010 movie The American. Born of an Italian mother and Dutch father, she has a number of internationally acclaimed films under her belt and her work has been twice Oscar nominated.

As the mysteriouos Gina Hawkes she seamlessly blends into violent scenes with a grace and elegance that defies her vulnerability. She’s the sort of girl every man wants to protect, including her father and the solicitor she has hired.

They are both being drawn into a grand conspiracy being played out at the very top levels of government. From proving Love Hurts, and that he has a Heartbeat, Glenister enjoyed sailing in the Retribution with Captain Horatio Hornblower and living Life on Mars in the eighties. He has been Dressing up for Breakfast while being a Silent Witness, crossing Frontiers to be part of Hornblower’s Mutiny and Vanity Fair to Have your Cake and Eat It.  After State of Play he sorted The Other Boleyn Girl, while Clocking Off after photographing all those lovely Calendar Girls. He made sure Detective Chief Inspector Glen Hunt from Ashes to Ashes will end up in the Kingdom of Heaven.

This new pacy TV conspiracy thriller has only four episodes, in which Glenister is virtually clutching at all straws, while trying to save both his life, a lady and his career. The ending is quite brilliant, leaving the way open for the producers to invent a new series, if demanded. Mathematics is a tool of the natural world, of which humankind is an integral aspect said Professor Marcus du Sautoy who in 2011 was all about cracking The Code