Designated a UNESCO world cultural heritage site in 1985, the Hildesheim Cathedral precinct in Lower Saxony, Germany, contains one of the most outstanding ensembles of ecclesiastical furnishings and treasures in Europe.

Many of these were assembled and produced during a period when the town of Hildesheim was a considered a centre for bronze making and undergoing transformation.

In 983 it was awarded ‘market rights by Holy Roman Emperor King Otto III (996-1002) and the building of a new house of worship was under the direction of one of the church’s patrons, Bishop Bernward of Hildesheim (960 – 1022)

One of the most famous examples of the works he commissioned in 1015 is a monumental set of cast bronze doors sculpted with scenes of the Fall of Man (Adam and Eve) and the Salvation of Man (Life of Christ) for the new Cathedral church.

They are the forerunner of the gilded bronze doors goldsmith Lorenzo Ghiberti would later make at Florence following that city being ravished by plague. In 1401 the Guild of Cloth Merchants held a design competition for rendering doors for the Baptistry, which Ghiberti was awarded. There is also a stunning bronze column inside the Hildesheim Cathedral dating from around 1020, the spiral decor of which was inspired by the Roman Emperor Trajan’s Column at Rome.

Covered in sculptural relief, the column depicts scenes from the New Testament but sadly it and the doors could not travel. During the Middle Ages the Church in Europe and England was the central pivot around which the whole community functioned.

The Bishop, whose staff of office is a crosier, was in charge of the Cathedral through his clergy, and the nave and side aisles were reserved for the knavery or common people.

This distinction is important to our understanding of what affected a church’s development.

To understand why the Church owned and created ‘treasures’ at all we need to transport ourselves back to a time and place when the inner life was supreme and ideas relating to that were translated into creative expression.

The fabulous crosier of Abbot Erkanbald is one of the Cathedral’s important artifacts, among the most impressive groups of 11th-century works of art still existing from ‘medieval’ Europe.

This also includes a cast bronze eagle lectern, a fabulous lion aquamanile (vessel used for pouring water in the ritual of washing hands in both religious and secular services) a stunning pair of candlesticks and the Bernward cross., which is made of silver and gilded (1007-1022) as well as jewelled crosses, reliquaries and portable altars, which are finely decorated with enamel and ivory.

During the Roman Empire the vast free-trade area of the Mediterranean offered followers of the way of Jesus ease of movement and a great degree of cultural uniformity. Despite local variations, this allowed them to spread his message rapidly.

The first services of Christian worship were held in a Roman civic basilica, or meeting-hall and architecturally it was the first standard form for a house of God. The altar was placed in the ‘apse’ where formerly a Roman magistrate sat in judgment on the many misdeeds of man.

In many towns in Europe Cathedrals were built to house the entire population so that in times of trouble they could all take shelter inside. 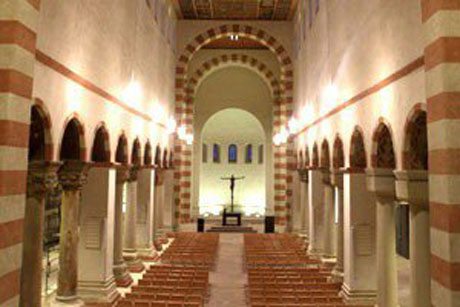 It was the building of a cathedral that transformed a town into a ‘city’ in the first place.

People ate and slept in the nave.

They talked without whispering, could bring in their dogs and since there were no pews, it was easy to move around. Often the nave was used as the village market place in inclement weather.

Matters not concerning religion were also discussed there, meetings were held, law courts held with the magistrate standing on the steps up to the high altar to be seen (chancel steps). Hawkers also sold their wares.

This is why so many trades are represented in stained glass windows. 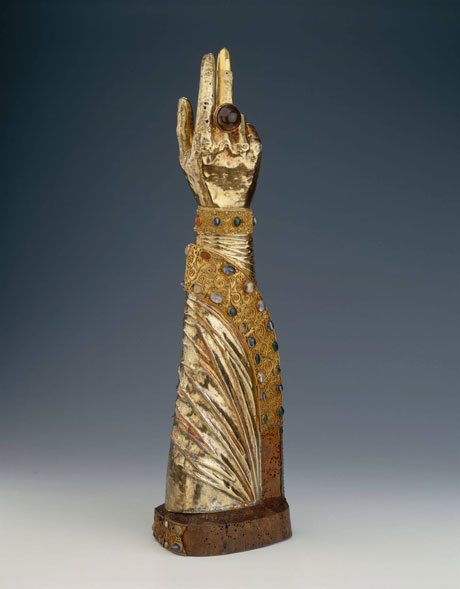 As great church buildings soared ever upward during the Middle Ages they reflected a transcendent, heavenly God.

Light was important because it was a metaphor for Christ, as it burst into and illuminated the sacred space.

Visible ‘things’ were symbolic of ‘material lights’, reflecting the infinite light of God.

This idea enabled those involved in organizing the faithful and designing houses of worship to embrace the concept of light, colour and splendour as part of Catholic worship.

Coloured glass, which had not been able to made in any quantity for centuries, was by the Middle Ages able to be used in windows, albeit in small pieces disposed within lead supports.

Outward ornaments used in church worship services were meant to aid the ‘inward purity’ of the worshipers. Using gold, bronze, rock crystal and gems, which were some of the most precious materials of the age, was all about honouring God.

They had not as yet learned to embrace Jesus’s humility. They also believed they were using these materials not much for their intrinsic wealth as for their ability to reflect and refract light in vast buildings only lit by candlelight.

Under the aegis of the clergy for four centuries, the style of Hildesheim’s Cathedral is defined by its rounded Roman arches as ‘Romanesque’.

Its reputedly “thousand-year-old rosebush”, which was discovered surviving in the rubble following the second world war, is today growing strongly on the cathedral apse, fulfilling the legend that the city will last as long as it continues to flourish.

The legacy of Bishop Bernward, who commissioned many smaller precious works of art, mostly for his Benedictine monastic foundation, is profound.

They include illuminated manuscripts. Monks for generations contributed to preserving precious statue-reliquary, as well as altar frontals of gold, candlesticks and crosses.

Liturgical books had covers of gold impregnated with precious stones and manuscripts were copied with illuminations added.

The material value however was not the most important aspect. Many objects were at times pawned or melted down when funds were needed, but what also was admired was the wonderful skill of the artisans fashioning them.

The small so-called Bernward Gospel has a front cover of gilded copper bearing a Byzantine plaque and is surrounded by large ‘gems’ of rock crystal.

It was a founding gift from the Bishop to the monastery and an aid to the ‘art of memory’.

The history of Cathedral building and their builders is closely linked to the regeneration of cities and commerce, the birth of the bourgeoisie and the development of civic liberties.

In most people’s minds the word ‘cathedral’ conjures up the idea of a large church. In fact many cathedrals were built along modest lines, while some parish churches, situated in very prosperous areas, were ambitiously conceived and often bigger than many cathedrals.

What established a church as a Cathedral was the presence of the Bishops chair, the seat of Apostolic authority; the Cathedra, hence the name Cathedral…Cathedra being the Greek word for Chair.

Bishops were seen to be direct descendants of the Apostles. The statement ex-cathedra or, from the chair, carried the highest authority and many Cathedra’s became magnificent examples of the wood carver’s art.

For centuries it had its own ‘canopy’ replacing the apse, especially when that architectural device was phased out of a church’s design.

12th century Cistercian Abbot and Doctor of the Church Bernard of Clairveaux, who was a very severe critic of the arts and any form of luxury, when talking about metal objects used such expressions as ‘fashioned with marvelous subtlety of art’ and ‘glistening brightly with gems’ for even he could not hide his admiration for their beauty and artistry.

A late-12th-century Saint Oswald reliquary, which is surmounted by a silver-gilt bust of the saint and decorated with finely drawn Niello plaques, will be a highlight.

Developed from the 12th century Niello was a technique in metalwork manufacture that was used in two different ways to underline the contour of a pattern against a light background or served as the background itself, creating a positive image. It also helped to refract light.

During the 12th and 13th centuries philosopher and theologian Sir Thomas Aquinas said ‘beauty is the light of truth’ and metal objects became the most highly valued of all artistic works. One of the most important works to survive and is included in the show is a monumental bronze baptismal font, dating from c1226.

The basin and its lid rest on freestanding kneeling figures of the four Rivers of Paradise.

Six feet in height it is richly decorated in relief.

The lid has four additional scenes in relief, and ancillary figures and lengthy inscriptions further enrich the font.

For over three centuries Europe witnessed a spectacular flowering of religious architecture and zeal and human emotion drove the workers on as they acknowledged the privilege of building the house of God and the faithful were encouraged to contribute.

While the cathedral at Hildesheim in Germany has seen a great many changes in its lifetime, not only in its own fabric, but in the people who worship there it is still about the stories of the people.

They did, and still do surround it, build it, pray in it, grieve in it, get married in it, are happy in it, seek joy and forgiveness in it that touch all the human levels of emotion. Love, loyalty, tragedy, sadness, happiness, intrigue, action and passion, they’re all here.

It is importantly too all about faith and how it can move mountains. A Cathedral complex like St Mary’s and St Michael’s at Hildesheim is a statement of faith.

It, like other Christian precincts around the world today, declares a belief in a certain conception of man’s relationship to his maker in a society, which acknowledged this relationship to be the central fact of its existence.