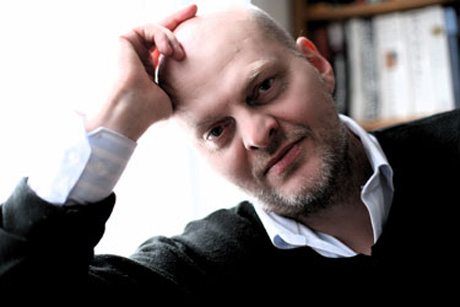 At a guess, I would say I’m not in the age range of readers that the publishers of, or author, Hallgrimur Helgason envisaged would read The Hitman’s Guide To Housecleaning. I don’t think the book was targeted at a middle class, middle aged, middle of the road female (me). It was though an interesting, lol, confronting and sometimes sad journey that I went on with this book.

Hallgrimur Helgason, an award winning Icelandic artist and writer, has had two previous novels (101 Reykjavik, Stormland) filmed. The Hitman’s Guide To Housecleaning, has been staged in Europe and is being filmed as well. Helgason wrote the book in English (his other novels were translated from Icelandic to English) which accounts for the book’s unusual turn of phrase; either funny with a creative use of English or a little strange. As he was born and lives in Iceland it’s probably okay for Helgason to poke fun at the names of Icelandic people. One of the main characters, Sigrudor becomes ‘Sickreader’ which, no matter how many times I read it still made me smile. The author also has fun with the main character, Tomislav Boksic, a Croation hitman’s understanding of Icelander’s accented English – they say ‘heresy’ he hears ‘hairy sea’.

Tomislav or Toxic as he becomes known after being employed in the US as a hitman for the Croation Mafia has a problem – he hit the right guy who turned out to be the wrong guy; an undercover employee of the FBI. The FBI, not pleased at losing a team member, put the heat on Toxic’s gang and he is supplied with a one way ticket to Zagreb and told to get lost for a while – quite a while.

Upset at leaving behind his luscious girlfriend, Munita, Toxic follows the boss’s orders and is about to board a Belgrade flight when he spots the FBI at the gates. This calls for drastic action and Toxic exits fast. Hiding in the men’s washroom, he kills a bald headed man and steals his clothes and identity.

The dead man was headed for Iceland’s capital, Reykjavik. Toxic shaves his head and joins the flight queue for Reykjavik. The discovery that the guy he is impersonating is Reverend David Friendly, from the state of Virginia, does give Toxic pause for thought – he’s never killed a holy man before.

Met at the Reykjavik airport by two television evangelists, Toxic decides, without luggage (it’s circling Belgrade Airport baggage claim) or any visible means of support to accept their offer of board and lodging.

The evangelists ‘Goodmondoor’ and ‘Sickreader’ welcome him into their home and he is persuaded to make an appearance on their television show. A success on the show, Toxic looks set for top billing but is unhappy at having to forsake his professional hitman career.

Proud of his curriculum vitae – 65 worry free hits (except maybe for his victims) he is annoyed the 66th turned sour.

Naked without a gun, any gun will do, he settles down to the life of a gun deprived visiting Christian celebrity.

The plot twists and turns as Toxic’s cover is blown and he narrowly escapes a visit from the ‘white hats’, Iceland’s police force. Hidden by the evangelists, who look on saving his soul as a challenge worthy of their calling, Toxic is shocked to learn his NY girlfriend has been iced – her severed head is cooling in his New York apartment’s refrigerator. This leaves the way open for him to start an affair with Gunhildur (Gun) the daughter of Goodmondoor and Sickreader. Toxic, on his way to being saved, by day, washes dishes and helps out in a church, by night, he canoodles with Gun.

There’s plenty of ‘language’ in this book which I would normally find offensive, but as most of the characters are from backgrounds that don’t bear thinking about, it does read as natural speech patterns.

Throughout the course of the story there are flashbacks to Toxic and his family’s roles in the chaotic, savage ethnic cleansing that occurred in the recent Serb/Croat war. These passages are effective and tragic; perhaps the author’s intention was to create a satirical anti war novel.

Don’t want to spoil the plot points and the suspenseful ending – read The Hitman’s Guide To Housecleaning, it might be outside your comfort zone but it’s also funny and thought provoking.

About the Hitman’s Author
Hallgrimur Helgason was born in Reykjavik, Iceland in 1959. He started out as an artist, showing his work in several galleries of both New York and Paris, where he lived in the late eighties and early nineties. He made his debut as a novelist in 1990 and gained international attention with his third novel, 101 Reykjavik (“Imagine if Henry Miller had written Tropic of Cancer on crack instead of wine.”-Tim Sandlin), which was made into a film starring Victoria Abril. In 2001 Helgason received the Icelandic Literary Prize for The Author of Iceland. He has twice been nominated for the Nordic Council Literature Prize, with 101 Reykjavik in 1999, and Stormland in 2007. A film based on the latter was released in early 2011. The Hitman’s Guide to Housecleaning is his only novel written in English. It was published in Iceland in 2008, in the author’s own translation, and became a bestseller in Germany in 2010. A father of three, Hallgrimur divides his time between Reykjavik and Hrísey Island.

Suzie Idiens’s work has been an ongoing investigation over the last few years into how a simple, wall-mounted object can possibly convey or invite emotion