Who would ever think that it would rain in Los Angeles, the city of eternal sun. However golden rays finally burst through the overcast sky signalling that the show must go on. After all it was time for The Oscars 2014.

Hollywood in California is viewed as the celebrity capital of the world. The Academy of Motion Picture Arts and Sciences is a place where sorrow and joy is brought to life, expanding minds and touching hearts all over the world. It is also a place that preserves the past, honours the present and intends to shape the future of the film medium.

Hollywood today is a well-oiled sophisticated creative scene. Annually stars of stage and screen gather to honour those they work with and their industry, which is populated by talented creative people both on and off the screen. Annually the red carpet parade at the Academy Awards is the place to see and be seen and 2014 was no exception. During World War I Hollywood became the movie capital of the world. The 1st Academy Awards were held in the Blossom Room of the Hollywood Roosevelt Hotel honouring the movies released August 1, 1927 – 1928. All through the Great Depression and World War II movies helped keep people’s spirits and dreams alive.

In 2014 broadcasting the awards ‘live’ has become big business, with over a billion people around the world tuning in to see how their favourite films and people have fared over the previous year. Daytime TV host, comedian, talk show host and self style ice road trucker Ellen DeGeneres returned after seven years to host this year’s event with great elan. She proved what a force she is to be reckoned with in terms of live performance. 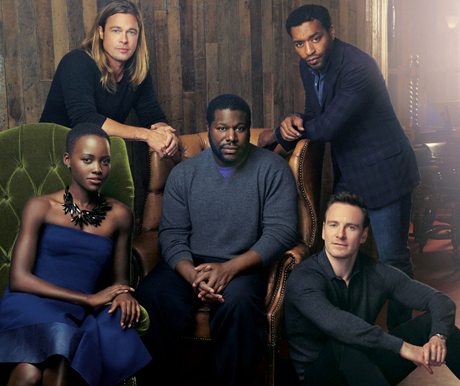 Her opening gambit was “For those of you watching at home, it has been a tough couple of days — it has been raining in LA. We’re fine. Thank you for your prayers.”

Her fun moments were indeed wonderful. The Pizza delivery and passing around the hat collection to pay for it brought a delighted reaction.

Then there were her selfies, taken and tweeted throughout the show. These were a light hearted commentary on our world of instant online celebrity.

Her daily television show, which reaches out to millions around the world entirely depends on her incredible ability to think on her feet and continually deliver a welcoming heartfelt performance. She did for the Oscars as well.

Let’s hope the Academy has her return annually, at least for a few years! She was clearly a popular much admired choice. This year the competition for that golden statue was indeed fierce.

It was a very strong field with amazing movies – American Hustle, Philomena, 12 Years a Slave, Wolf of Wall Street, Gravity and Captain Phillips all vying to win Best Picture of the Year To start the evening in an emotional, beautifully delivered brilliant speech, a lesson in how to do it well for many of the others who came after was Jared Leto. He won Best Supporting Actor for the illuminating movie The Dallas Buyer’s Club.

Leto spoke from the heart, dedicating his coveted golden statue award to his mother, a woman of true courage who taught him to dream. He also importantly acknowledged ‘those who have ever felt injustice because of who they are’, or whom they love.

Becoming the Australian with the most Oscars to date, Catherine Martin won two, one for Costume and the other shared for Production design.

After the first she gave a short speech, the paper on which it was written extracted from where it was tucked in her bra in ‘cringing’ true Aussie style. For anyone who has seen the movie it was no surprise that Gravity won so many awards, including Cinematography and Visual Effects.

What a triumph for those creative talented people who not only imagined this extraordinary scenario, but then made it seem so real on screen so that we were all voyeurs in space. The Best Foreign Film was the Italian entrant The Great Beauty, which has had many accolades. It is an intoxicating look at Rome, the eternal city.

U2 appearing on stage live to sing Ordinary Love, the theme to the motion picture event Mandela: Long Walk to Freedom was well received.

A special mention was given to the separately awarded Oscar Science Awards, which provide the alchemy; turning silver and plastic into dreams.

Validating dreams, Lupita Nyong’o gave a stirring speech, saying it had not escaped her that the joy in her life was made possible by portraying the pain in someone else’s.

She deservedly received a standing ovation from her peers.

Jo Bayley, our Fashion Editor, reports on Who Wore It Best, commentary on the frock fest in her column Fashion Elixir this week on The Culture Concept Circle.

The Oscar for the Song of the year was given to Let It Go, composed for Disney’s animated movie Frozen. It was movingly performed live by Idina Menzel and was written by Kristen Anderson-Lopez and Robert Lopez, winning their first Oscar.

Writing is so large an aspect of the success of any movie and so it was wonderful to see it go to John Ridley for his adapation of the book by Solomon Northup for the screenplay of 12 Years a Slave, which was directed by Steve McQueen starring Chiwetel Ejiofor, Michael Fassbender, Lupita Nyong’o, Benedict Cumberbatch and Paul Giamatti.

This moving, brilliant motion picture achievement was driven by his success.

Best original screenplay went to director, producer, screenwriter and actor Spike Jonze, for his brilliant parody HER, which tells a tale of a man who falls in love with his computer’s operating system.

A golden glow appeared on the face of the Best Actress Cate Blanchett, who on winning an Oscar for Blue Jasmine, delivered a thought provoking stirring and flawless speech without notes, making all Australians proud.

Matthew McConaughey winning for Best Actor was a wonderful way to end a very stylish evening presentation. His award was well deserved, in a role that saw him carrying the burden of a difficult role on his scrawny shoulders gracefully and with integrity.

Incredible movies, incredible stars and great experiences. All in all the recipients of The Oscars 2014, delivered great performances into our lives.