Occasionally in life serendipity ripples across landscapes and people to reveal beautiful truths, resilience and artistic merit. When this occurs a purity of purpose resonates and degrees of separation narrow.

Walking into the Incinerator Art Space, Willoughby, a north shore suburb of Sydney, and discovering the recent works from the art centre based in Papunya, Northern Territory, the birthplace of Western Desert dot painting was such a moment.

This exhibition coupled with listening to the passionate and animated conversation from Rae Walker and Lisa McLaren about the history, terrain and Aboriginal artists from this thriving community was inspiring. They are the Directors of the home based gallery, Honey Ant Gallery with two locations in Sydney and Noosa. 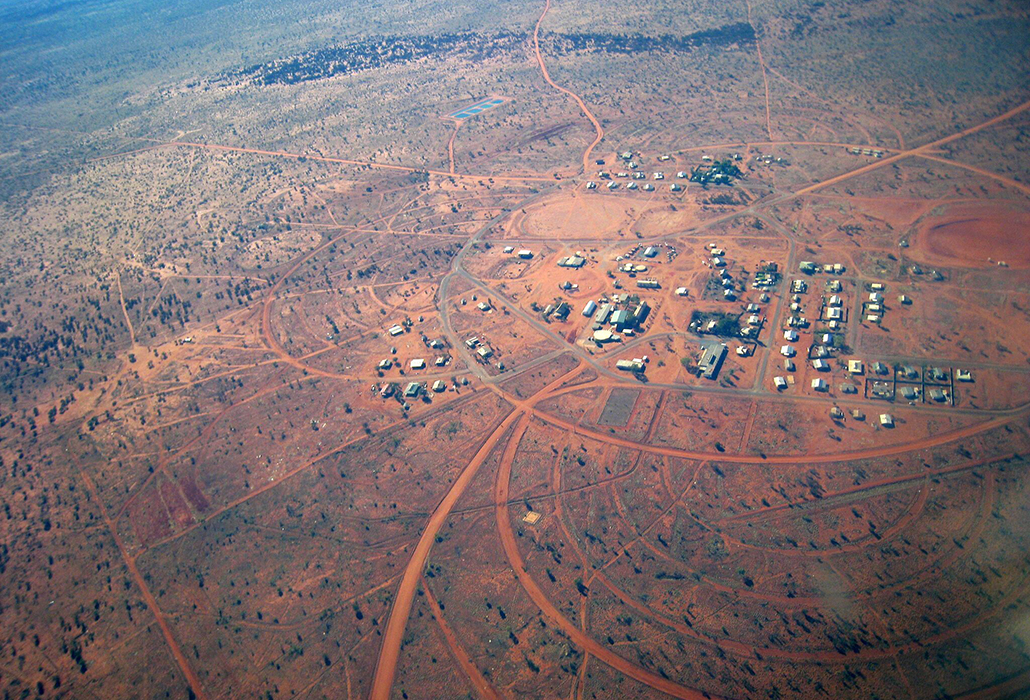 Papunya from the air showing Honey Ant Dreaming Streetscape, c. 1976. Photo by Max Stollznow and featured in “Streets of Papunya” by Vivien Johnson.

Papunya Tjupi Arts is a community centre located in Papunya, approximately 250 kilometres north-west of Alice Springs in the Northern Territory. It is lovingly and expertly managed by Joanna Byrne.

Consequently some of the most exciting Central Australian Art is coming from Papunya Tjupi Arts , formed in 2007 to represent artists from the Papunya region, many of whom are descendants of the original Papunya artists.

The remote community of Papunya lies within the culturally rich vicinity of the Honey Ant Hills. It was here in 1971 that the Western Desert dot painting movement began. 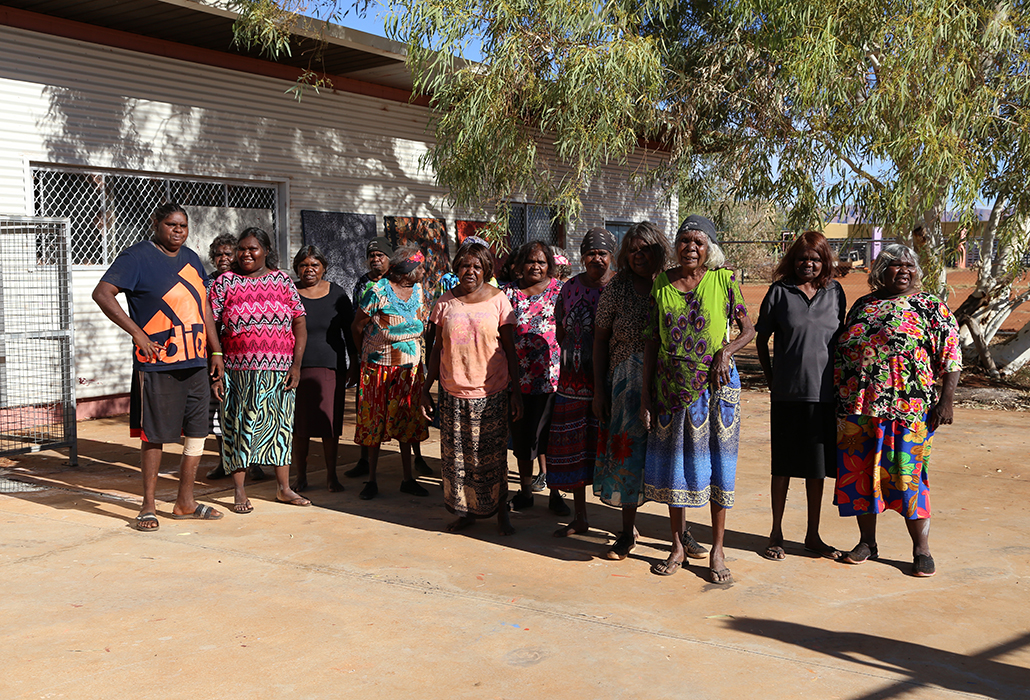 Initially just the elder men painted and they were encouraged by a young art teacher Geoffrey Bardon. He invited the old men to paint the Honey Ant Mural on the school wall. The old men were very enthusiastic and carefully designed a story that was safe for everyone to view.

Vivien Johnson writes in her wondrous book Streets of Papunya. “The Honey Ant Mural was not – or not only – an adult educator’s clever idea for an art project. It was also what the 1981 Report for the Working Party on the Protection of Aboriginal Folklore called an ‘artistic manifestation of a people … the flowering of the popular consciousness’. “

In the 30’s, 40’s and 50’s the government encouraged Desert people to come into Haast Bluff. Welfare officers were sent into help and support the people. Sadly the water supply ran out and the settlement was relocated to Papunya where the water supply was more reliable.

The Honey Ant ancestors are asleep underground in the hills beyond. The Honey Ant town plan was visionary and in1976 an extraordinary achievement. 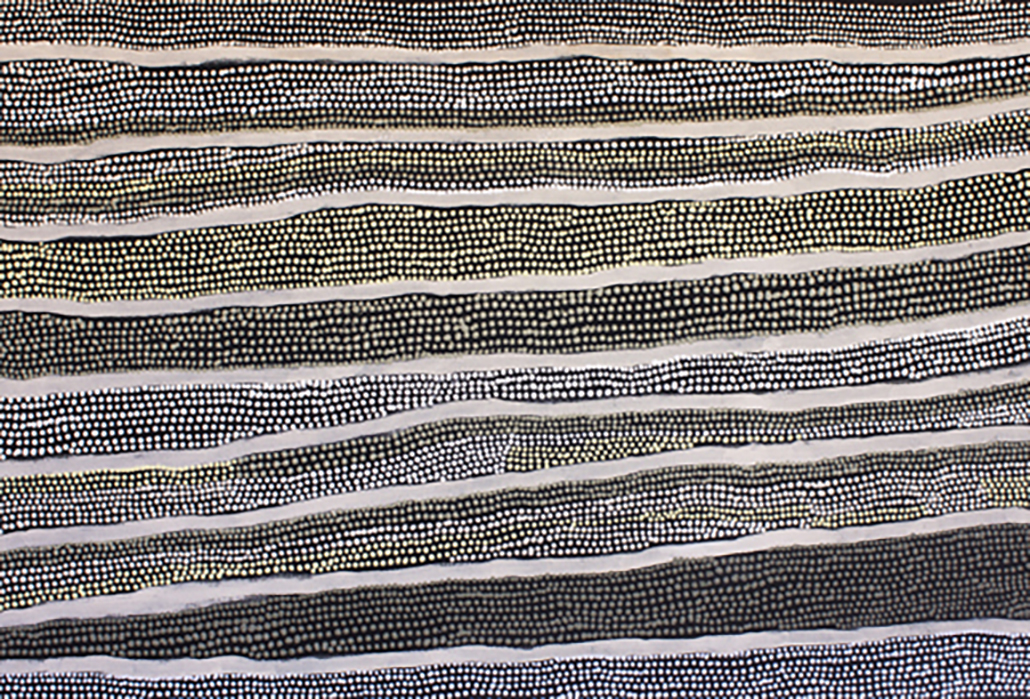 It was not till the 1980’s that Vivien Johnson writes “the women painters of Papunya first stepped out of the shadows” and today their daughters and granddaughters painting at the Papunya Tjupi Arts centre are putting Papunya back in the hub of Aboriginal artistic expression.

This exhibition celebrates and acknowledges artworks created by women artists. It reveals a beautiful selection of the profound living culture within Aboriginal art.

The tradition of generations carrying on painting was insightful to observe in a mother and daughter’s artworks hanging together so sympathetically. Each artwork individual yet harmoniously connected not only by blood but the shaping and sharing of tradition and aesthetics. 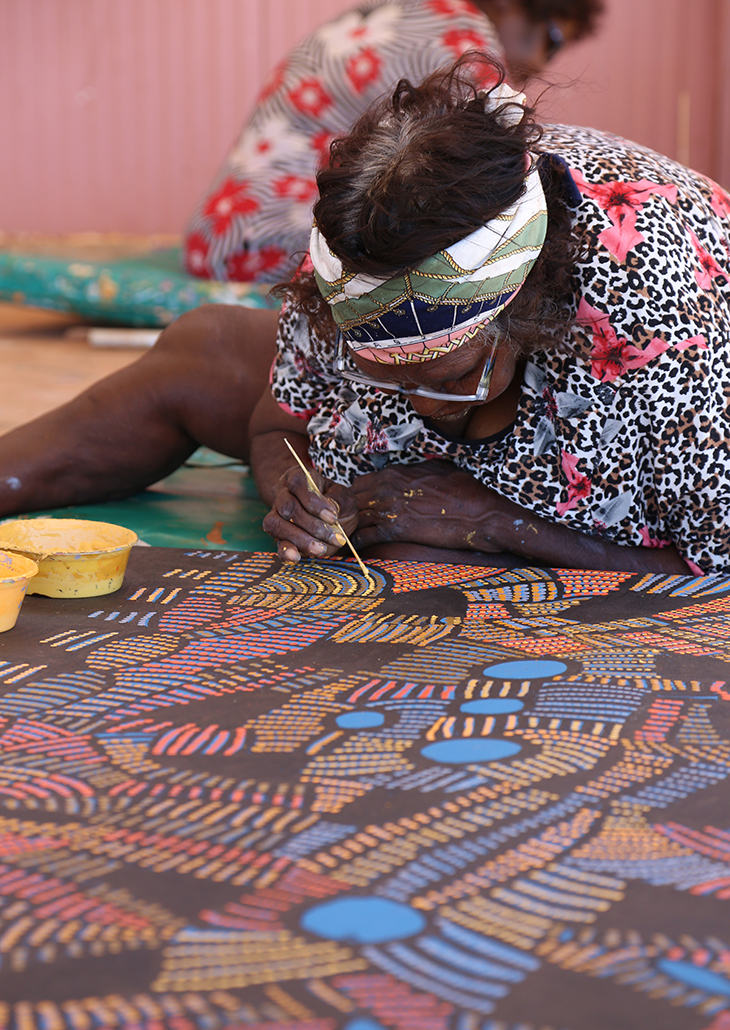 This significant location was where Isobel while on a trip from Papunya to gather bush onions gave birth to Puuni. Isobel depicts designs associated with her grandfather and father’s country, Wantupunya, a Kapi Tjukurrpa (water dreaming) site to the north of Papunya and west of the sacred mountain Karrinyarra. Water dreaming sites are vital for the regeneration of nature.

When the lightning can be seen at a distance, the elders will start singing to the lightning, encouraging it to bring more rain to replenish the land.

The intricacy of design within her painting Kapi Tjukurrpa – Wantupuny is discerningly executed and embedded with deep cultural pride and wisdom. Isobel articulates “I paint for the future of my culture and my family.”

Under her mother’s guidance and artistic practice Puuni is an emerging talent at Papunya Tjupi and she continues to reinvent her mother’s Tjukurrpa. Her painting Kapi Tjukurrpa also tells a water dreaming story of her grandfather’s country Wantupunyu.

In this painting the central shapes are an important water or rock hole site. The lines represent the elements of a storm – wind, rain, thunderclouds and lightning. The patterns are rhythmic and cyclic with the movement of rain and water flooding dry creek beds. 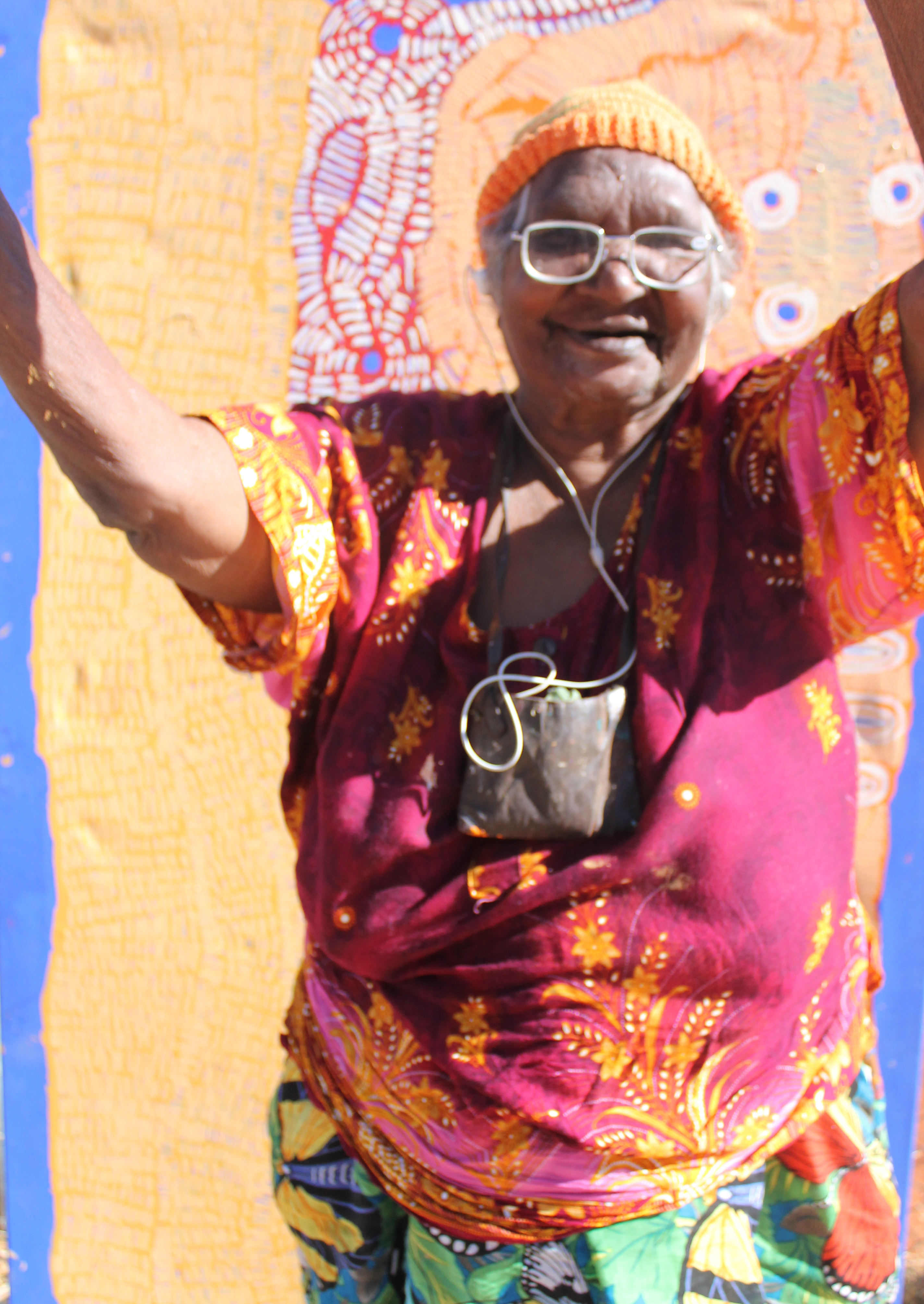 Doris Bush Nungarrayi is a well-known Aboriginal artist and her artworks have been shown both in Australia and internationally. She was born around 1942 in Haasts Bluff, however she paints the Dreaming sites located nearer the Western Australian boarder.

She has become one of the most productive and leading painters from Papunya Tupi Arts since it was established.

She is a highly respected, warm hearted and astute member of this artistic community. Her distinctive and layered artistic style is cemented in the varied interpretations of two of the main stories she paints. 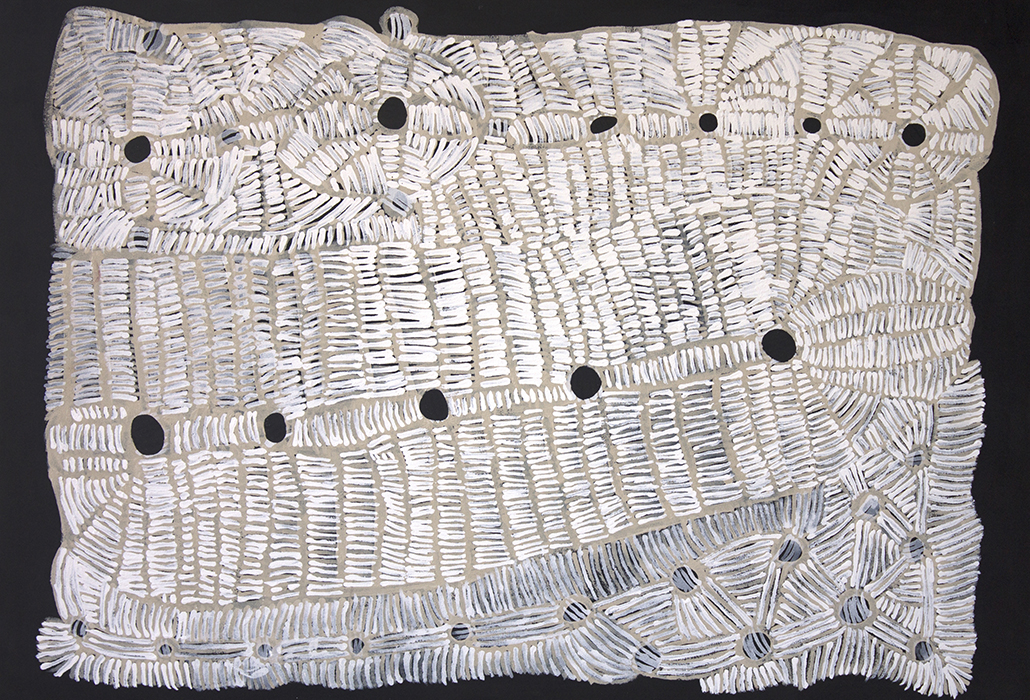 The first story is illustrated in in her painting Papa Tjukurrpa-Nyumanna. Nyunmanu is her ancestral dog dreaming site and is situated south-east of Kintore.

Most of the Dingoes and their pups from this place rose up into the sky and became stars. However the ancestral mother Dingo and her pup had gone hunting and were too tired to rise up, so they turned into a large rock that marks the place of this sacred Dreaming.

In this story the circles within the painting represent important waterholes and the roundels or disks extending from the circles are the designs women paint on their breasts. The markings construct a journey of deep significance to Doris.

Her second story is a universal one, a love story that emanates from her own personal journey, her own love story from the past. Doris talks of times when she was a young girl in the bush, swimming with her friends at Haasts Bluff. 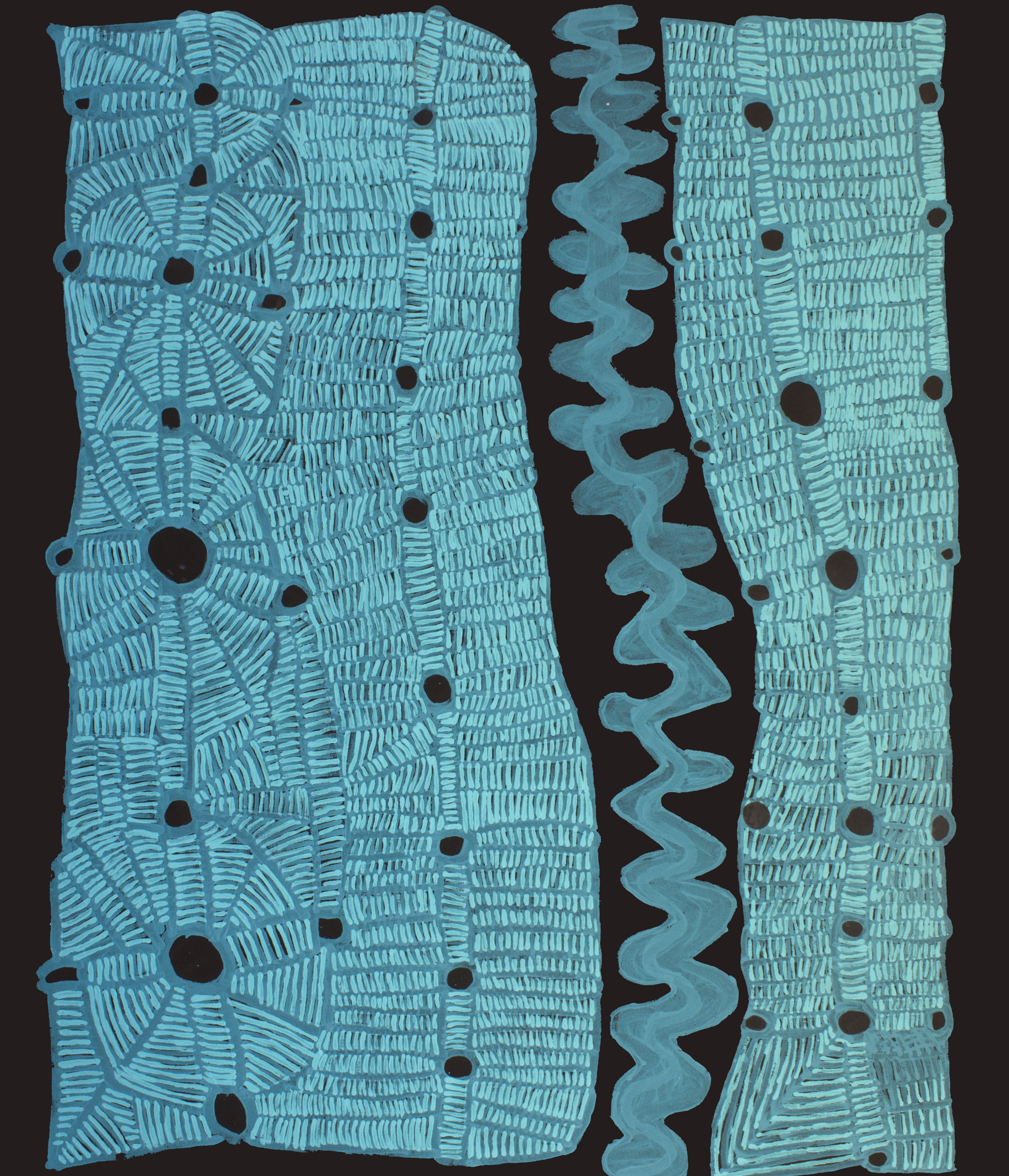 In her painting Tjurrpinyi Ikuntji the shades of blue and turquoise whirl and spin with vigour and life pulsates in the brush strokes, bathing the painting in a sense of promise. It is exquisitely proportioned and an intensely moving tribute to her loved one.

While Doris is painting she sings, so every painting has a song. When she has completed each painting she holds her hand over the finished painting and sings the journey.

I believe the song for this painting could be touched by melancholy, nostalgia but the chorus would be reverent, wistful but above all joyous.

Honey Ant Gallery proudly presents Papunya Tjupi Arts, 2018, an exhibition profoundly beautiful and enriching. The paintings are remarkable symbols of Aboriginal culture, which continues to flourish and grow in the contemporary art world.