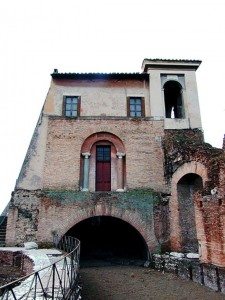 The ancient Romans controlled the area around the Mediterranean for over six centuries celebrating their victories and expressing their politics and culture by holding great festivals, triumphal processions, fine oratory and stupendous spectacles. The first Roman Emperor Augustus, from all contemporary descriptions, preferred to live with his wife Livia and her children in comparative simplicity. His house, like its neighbours, was rapidly overshadowed and overbuilt by the extraordinary architectural extravagances of his successors, the palimpsest of palaces sprawled upon the Palatine Hill, which was steeped in historic mythology to do with Romulus and Remus, the founders of Rome. Augustus lived his life here, and it was also home to the famous orator Cicero as well. The showplace of one reign became the foundations for the next, not even stopping when all the available surfaces areas were exhausted. Spilling into the Forum on one side and down toward the Circus Maximus on the other, the palace complex built there eventually crumbled into a series of ruins and archaeologists have been seeking and striving to unravel the puzzle for centuries. Only in 2008, after decades of restoration, did the original House of Augustus finally open to visitors. The real draw of the original House of Augustus isn’t its size or architecture; as Suetonius tells us, Augustus lived “in a modest dwelling remarkable neither for size or elegance.” Instead, it’s breathtaking for its vibrant, well-preserved frescoes. Better yet, they date from a particularly poignant time in Rome’s history; they were completed just a year after the Battle of Actium, when Octavian defeated Mark Antony and Cleopatra–bringing about their demise, the seizure of Egypt, and Rome’s eventual shift from republic to empire, in one fell swoop. Painter Claude Monet created his now world famous garden at Giverny in Normandy where sunlight, fresh air and the interplay of light reflected on his canvases