A literary party at Sir Joshua Reynolds’s. The 1851 engraving after Doyle shows the friends of Reynolds—many of whom were members of “The Club”

Human Kind – Transforming Identity in British and Australian Portraits 1700-1914 is the title of a four day conference, or gathering to be held September 8 – 11, 2016 in Melbourne that ‘focuses on British or Australian portraits as separate fields, and as overlapping or comparative studies’.

The unique conference is a joint initiative of the University of Melbourne and the National Gallery of Victoria and will explore contemporary perspectives on portraiture held in collections in both Britain and Australia.

Painting, print, drawing, sculpture and photography are the genres academics and curators will study and discuss, in what is billed as ‘dynamic interchange’ between local and international scholars at the largest gathering of its kind George Lambert (1873-1930) whose journey from St Petersburg to Germany to England, Australia and back to England is a tale of its own, was appointed an official war artist during World War I.

Commissioned to execute twenty-five sketches and paint the Charge of the Light Horse at Beersheba in 1917, his portrait of a Sergeant of the Light Horse 1920 complete with plumed hat, helped develop our young nation’s identity and to create the legend surrounding the Australian Digger in our country’s national psyche.

The roots for portraiture as a genre in England were more or less set by the sixteenth century and by the eighteenth century sitters were often portrayed in finery fit for kings, or flattered by overt or implicit comparison to god’s muses, military heroes and intellectual geniuses Joseph Wright of Derby portrayed with rich but subdued colouring in one of his self-portraits, is a penetrating characterisation.

It was during the eighteenth century enlightenment that displaying the British persona became an integral aspect of a grand style that included conversation pieces and Thomas Gainsborough (1727 – 1788) endowed history with lyric faces. 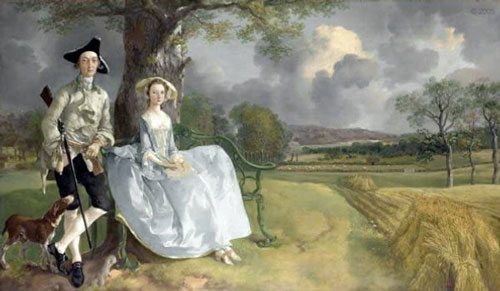 His painting of Mr. and Mrs. Robert Andrews beside a cornfield, considered one of his masterpieces, provides a direct and vivid record of country gentry; their faces unconstrained by fashion, as the artist captured a moment in perfect transience Lady Frances Finch c1781-82 would have been one of those sitters among those that gathered annually at the Royal Academy from 1769 onward to see the portraits they had commissioned of themselves on display. The portrait of Miss Susanna Gale created c1763-64 by illustrious English portraitist Joshua Reynolds (1723-1792) first president of the Royal Academy, is infused with an unprecedented sophistication, learnedness and dignity.

Both flattering and elegant, Reynolds paintings became renowned for bringing out the character of the sitter and their role in society; ‘intimate without being impertinent’.

In his lectures to the Royal Academy, Reynolds articulated his personal belief that portraits should strive not to expose ‘all the minute breaks and peculiarities’ but ‘ennoble the character of the countenance’. The question is were they reflecting reality or idealism.

So what is the test of a great portrait?

Is it not empathy, the power of the artist to enter into the sitter’s emotions and convey these feelings to another – to make him also experience empathy?

To find out you will have to attend the conference, which is aiming to be both informative and provocative, providing a robust forum platform for debating ‘new and contemporary perspectives’.

This will include: how portraits shape social values and invent new possibilities for defining ‘human kind’

Chairing the sessions will be Professor Mark Hallett, Director of Studies, Paul Mellon Centre for Studies in British Art.