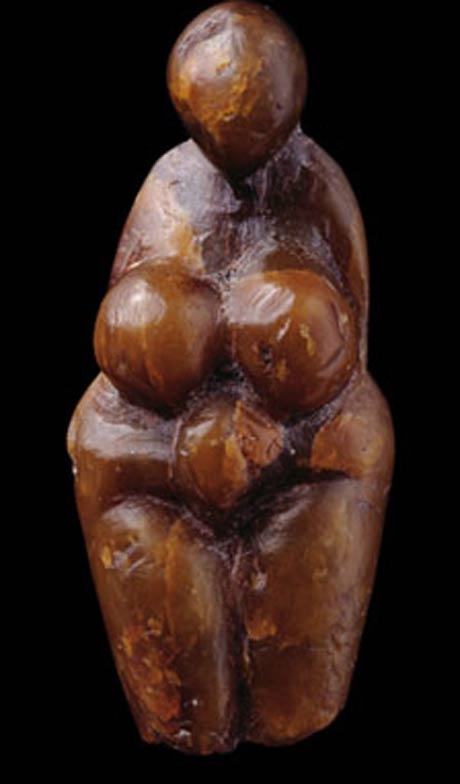 A so-called ‘Venus’ figurine, a female figure sculpted from steatite, found at Grimaldi in Italy, is about 20,000 years old. Hundreds and hundreds of figurines have been found dating to around 20 – 25,000 BCE in an overwhelming variety and diversity of shapes and styles. This has ensured that many theories have been developed about them and their intent in the world of academia, consequently sparking much debate among scholars, curators and collectors.

This Venus, along with many other such wonderful early art masterpieces, created between 10 and 40,000 years ago will be featured in an outstanding exhibition to be held at The British Museum opening on 7th February 2013. It is entitled Ice Age Art: arrival of the modern mind and will offer a unique opportunity for many to view a selection of the world’s oldest known sculptures, drawings and portraits. Whether religious or symbolic, figures like the Venus do represent a movement towards what academics and scholars now designate as art from the Ice Age, which includes cave paintings, rock carvings, portable sculptures and female figurines.

They have been called ‘Venus’ because they most certainly portray recognisable features of the the female form and also most likely represent womanhood and fertility. The materials they were made from include stone, clay, bone and antler. 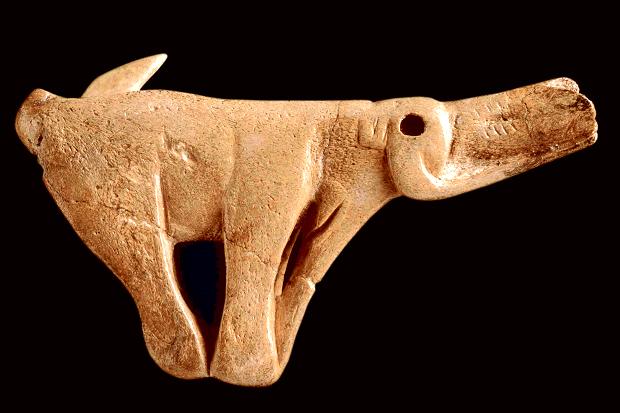 Endeavouring to understand just how any person can create an image in their mind’s eye, construct it from a hard substance gleaned from nature, that when given form can be animated to capture our attention, is surely nothing sort of amazing. There is seemingly an enormous connection of both mind and spirit when you first encounter a sculptural work of art from the period ten to forty thousand years before the Christ Event, among the earliest known forms of human creativity.

Their modernity is often quite confronting, as we come face to face with our own mortality and re-think our conceptions about what art is, or is not. This show is all about how humanity, on its first step towards becoming civilised, first took time out and then thought about and began to shape an object such as this spear-thrower carved from a reindeer antler and found in a rock shelter. 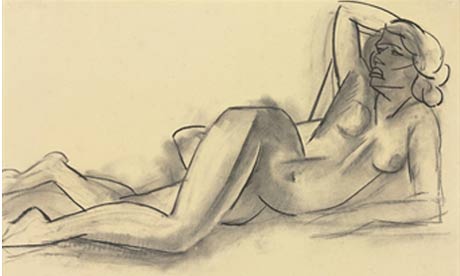 What sets this exhibition apart is that, for the first time, the figures will be presented as works of art, rather than archaeology as it showcases an ‘explosion of technical and imaginative skill’ at the very beginnings of art.

They are to be presented alongside modern art works by the great British sculptor Henry Moore (1898-1986), the works of Dutch painter Piet Mondrian (1872-1944) and drawings such as Le Grand Nu (1929) by noted French artist Henri Matisse (1869 – 1954) so that we can all better understand the fundamental human desire to communicate and make art as a way of understanding ourselves and our place in the world. 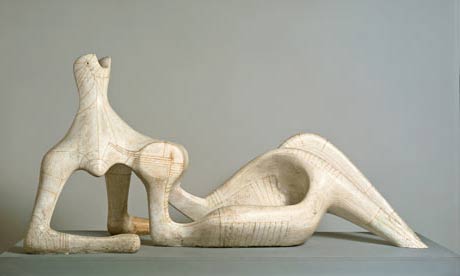 What the show will also undoubtedly reveal is how this concept has not really fundamentally changed much at all in 40,000 years of human history.

Dr Jill Cook, Curator of European Prehistory at the British Museum, is a leading authority on the ‘portable’ art of prehistory. The ‘portable’ sculptures include female figurines, animals, composite figures (human and animal forms), tools (decorated with figures, animals and patterns), plaques and pendants.

Side of Bison sculpted from mammoth ivory. Found at Zaraysk, Russia, about 20,000 years old

Artists down through the ages, in times as changeable as our own, all have constantly experimented with issues of expressing light and movement and allowing the viewer to experience perspective as well as how an artist struggles with the challenges associated with representing scale and volume accurately, while letting their imagination run free.

Best known for his semi-abstract forms that are a 20th century impression in the humanist tradition, Henry Spencer Moore’s radical exploration and interpretation of sculptural form – art at the pinnacle of what is possible, was at the cutting edge of changes in the world of art during the twentieth century that would herald a contemporary age from rendering images that imitated reality to those that were reduced to just shapes and lines, humanity in abstraction. Moore’s works suggest both the continuity and strong links we retain with our ‘Ice Age’ past and can strike a powerful chord that harmoniously resonates. Humankind seems to have always portrayed the human form in a manner that utilizes both elegance and simplicity.

This beauty will be appreciated in a striking drawing on display of two deer engraved on a piece of bone found in the cave of Le Chaffaud, Vienne, France.

Figures were stylised and full of life as in some of the earliest ancient Greek sculptures from the Cycladic islands, off the coast of Crete dating from 3000 – 1700 BCE.

The Harpist from Cycladic Greece dating from 3000-BCE, is a dynamic figure that can basically take us back to the beginnings of art. There is a tendency to believe that there is no co-relation between paintings and sculpture but that is not the reality.

Dutch painter Piet Mondrian became famous for his drawings as the founder of abstract art and ‘De Stijl’ (The Style), an aspect of what art and design commentators have called Modernism.

His works used black, white and gray and later bright primary colours in a combination of man made shapes that were also disposed in harmonious rhythms.

Interestingly he started his career exploring the Netherlands landscape first traditionally as in his Farm Along the River Gein, which seems so far removed from what he would end up creating that we could be forgiven for thinking that he had met morphed into another person.

Experiencing a period of change and renewal he discovered and began to express his own vision of nature through the use of abstraction.

Mondrian was profoundly impressed like so many other artists of his era by the works of Spanish Painter Pablo Picasso (1881-1973), the co-founder with Georges Braque of Cubism.

He was so profoundly impressed that he moved to Paris and the Montparnasse district, where so many great artists had gathered and were all sparking off each other. 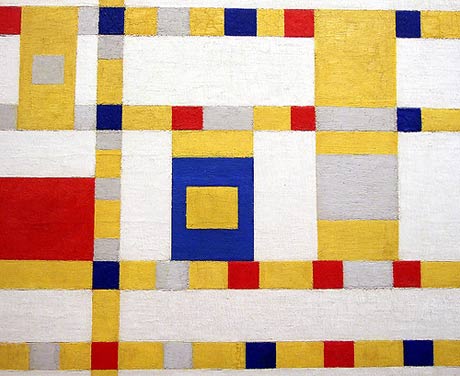 Almost immediately his compositions changed and everything was reduced to lines and he drove abstraction further, avoiding curved lines and diagonal accents.

He wasn’t about reality wanting to bring about a state of heightened consciousness during the experience of everyday life. His painting no longer had to begin from an abstracted view of nature, it could emerge out of purely abstract rules of geometry and colour, because he found that this was the most effective language through which to convey his own spiritual message.

Fleeing Paris for New York during World War II he was influenced by a sense of freedom, the pulsating life in the city and rhythms of American jazz music with colour becoming his primary focus.

His New York City I and Broadway Boogie Woogie became his final finished work of art when he contracted pneumonia on 1944 and died. 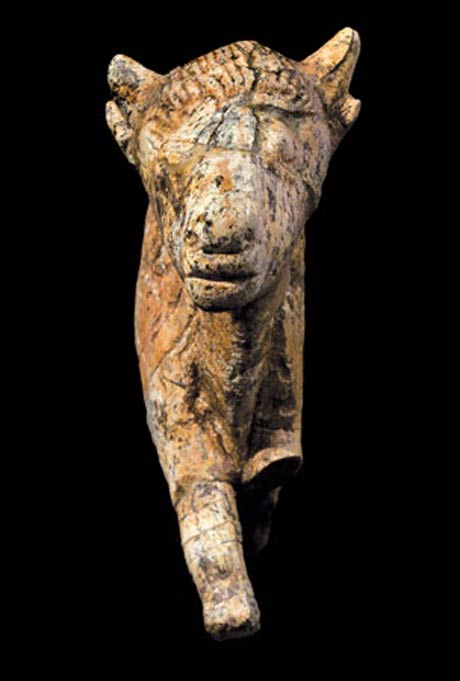 While Mondrian’s work had its roots in the theories and images of Dutch Calvinism, he had kept it moving irrevocably forward as he progressed and changed within himself.

Eventually he attained stylistically a purity of line as he searched relentlessly to represent clarity and force, all the while endeavouring to gain and retain the sheer simplicity Ice Age art represents, wanting perhaps to prove that art can be a guide for humanity.

This bison carved from the ivory shed by a mammoth, an extinct type of elephant, was found in Russia. Again its one of only many images of nature reduced by ‘Ice Age’ artists to simple forms that are however, recognisable.

Neolithic and Bronze Age Cycladic figures present an intriguing link between the art of prehistory and what we regard as ‘western art’. Lord Colin Renfrew, former Disney Professor of archaeology at Cambridge perhaps encapsulated it in a sentence when he said

‘a handsome standing figure, with quiet, unassertive rhythms and balanced proportions, achieves one of the most compelling early statements of the human form’.

One of the most beautiful pieces in the exhibition will be the 23,000-year-old sculpture of an abstract figure from Lespugue, France.

It was discovered in 1922 in the Rideaux cave of Lespugue (Haute-Garonne) in the foothills of the Pyrenees by René de Saint-Périer (1877-1950).

The figurine is nearly 6 inches (150 mm) tall and is carved from mammoth tusk ivory. It was damaged during excavation, and so today there are many reconstructions of it.

Picasso was apparently fascinated with this figure and it influenced his 1930s sculptural works to a large degree. As he was one of the most influential artists of his age in terms of his impact on other artists, it is no wonder that Ice Age art became a huge influence on contemporary art.

Although an astonishing amount of time divides us from these Ice Age artists, such evocative pieces show that creativity and expression have remained remarkably similar across thousands of years.

They reveal that skillful, practiced artists were experimenting with perspectives, with scale, volumes, light and movement, as well as seeking knowledge through imagination, abstraction and illusion to produce a portable image that helps us to document and understand their world.

“All art is the product of the remarkable structure and organization of the modern brain. By looking at the oldest European sculptures and drawings we are looking at the deep history of how our brains began to store, transform and communicate ideas as visual images. The exhibition will show that we can recognize and appreciate these images. Even if their messages and intentions are lost to us the skill and artistry will still astonish the viewer.”

An accompanying publication is available by British Museum Press: Ice Age art: arrival of the modern mind by Jill Cook

A full public program of lectures, workshops and events will run concurrent with the exhibition.