…“bravo, the music will not die” said Italian conductor Arturo Toscanini (1867-1957), when he heard a new Italian ensemble – iMusici rehearsing in April 1952. Founded by twelve young enthusiastic musicians in 1951 based on its countries brilliant musical traditions, iMusici da Roma created a unique orchestra; six violins, two violas, two cellos, one double bass and one harpsichord. They do not have a conductor, but instead tune into each other brilliantly. Their understanding of the music is innate, their playing seamless. They have succeeded gloriously and are a true ensemble – all the parts of a whole taken together with each part considered only in relation to the whole.

Players have come and gone from this fine music ensemble over the years, but the essence at the heart of their music making has remained faithful to the vision and philosophy of its original founding players.

Current members will play an exciting program of Italian music at Melbourne, Sydney and Brisbane in February 2012 as part of their world 60th anniversary tour. The group will features work by great Italian composers, including Rossini, Donizetti, Paganini and Vivaldi. There has been many interpretations and recordings of Vivaldi’s fabulous, and now famous piece of music, The Four Seasons. However nothing can really prepare you for hearing it played, one on one, by an orchestra for whom the music seems to be programmed into the DNA of its players. An iMusici recording made in 1971 sold over 25 million copies, inspiring other musicians globally and at that time brought the glory of eighteenth century Italian music to the attention of the world.

It was during the Italian Renaissance, from the end of the thirteenth to the beginning of the seventeenth century in Europe, the love of life so cherished by the ancients and expressed through its music, was re-established. The towering achievements of the Italians during that amazing period of revival and rebirth, meant that all of Europe as well as England was richly ennobled by Italian support for an expansion of world exploration and trade, the birth of the sciences, excellence in the arts as well as its great achievements in architecture. This era also heralded the arrival of a whole new era of marvelous music-making, so eloquently reflected in the grand manner of what is now known as the Baroque style, which gave free rein to the artist and his imagination.

A lively description of the power of the iMusici rendition of Vivaldi’s ‘Four Seasons’ was recorded in the Braunschweig Newspaper 1.11. 2010 when the orchestra played for the people of this historic town, which is located in the Harz mountains of Lower Saxony in Germany… Composer Antonio Vivaldi (1678 – 1741) is for Italians, and many others a towering figure in the world of music. Throughout his life he was commissioned to compose works for the church,  the nobility and significant members of European royalty. An exuberant and flamboyant composer, Vivaldi was an ordained priest with flaming red hair. He didn’t conduct the mass but instead for most of his life cared for a flock of disadvantaged children that he worked with, and composed for. The children were either abandoned, orphaned or had families that could not support them. They were cared for at Venice in a former hostel, which had been established for returning Crusaders – the Ospedale della Pietá. 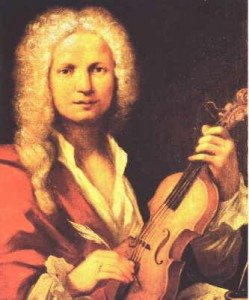 Vivaldi’s music has an unmistakable characteristic resonance, that is all at once expressive and emotionally charged. Vivaldi was only 25 when he started composing vocal works the children could perform. A virtuoso violinist, considered a true maestro because technically his playing was flawless, he was promoted to maestro di’concerti in 1716. He became responsible for all the musical activity of this unique institution, which was a convent, orphanage and music school rolled into one. The ‘home’ was well endowed by ‘anonymous fathers’ because it also accommodated the illegitimate offspring of noblemen and their mistresses. Consequently the decor had an air that bordered on opulence. Europe’s composers in a ‘romantic’ movement that started around 1810 and went until about 1900, developed a musical style that pushed the edges of human achievement in making music. iMusici will also play works by Gioacchino Rossini (1792-1868), Italy’s foremost early Romantic composer. Rossini had a love of melody, like Mozart with whom he’s often compared. He produced memorable chamber music, instrumental and piano pieces. A significant composer of opera, his best known works are The Barber of Seville, which sparkles with spirit and caprice. Then there is William Tell, which was noble and serious, re-enforcing an idea of reflection and reaching great heights of pathos and lyricism. This when combined with a new-found luxury of harmony and tone meant that the music was delivered with passionate conviction and therefore entirely seductive.

However after achieving so much Rossini gave up opera suddenly at 37 years of age when he witnessed a grand opera his friend Giacomo Meyerbeer (1791 – 1864) had composed – Huguenots. A conversation recorded in a book about Mendelssohn by German composer, conductor, writer and music-director Ferdinand Hiller (1811-1885) reveals Rossini expressed his doubts about the future of opera. iMusici will perform Rossini’s ‘Sonata a quattro’ No.1 in G major and Une Larme – Theme and variations for cello and strings, which both highlight the characteristics and sounds of superb string instruments.  The ensemble recorded Rossini’s Six String Sonata’ in 2011. They were composed when Rossini was only twelve years of age and have been called precocious. With great emotional depth they provide a challenge in technique for any player and their composition seems especially amazing when you realise that they were so finely drawn by someone so young. Rossini was a prodigy in every sense. 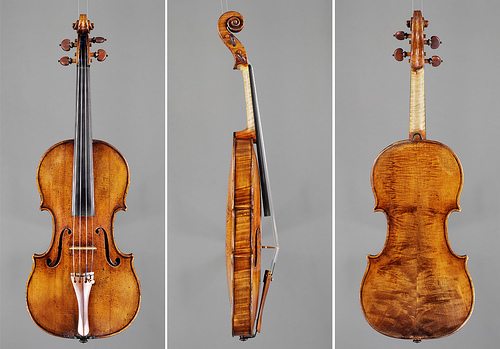 Views of the Hubay 1726 Stradivari played by Paganini

Other works iMusici will play include Niccolò Paganini (1782 – 1840) – Il Mosè – Theme and variations on the 4th string for violin and strings and Domenico Gaetano Maria Donizetti (1797 – 1848) Allegro for Strings in C Major.

Paganini’s compositions were technically imaginative.  One of the most celebrated and well travelled violin virtuosi of his time, Paganini was a master of improvisation. He indulged in artistic pleasantries and musical hi jinks, including making animal noises. He excelled at entertaining the public gloriously and they adored him for it. He famously said ‘music is a question for which there is no answer’.

Donizetti was a leading composer of his day and of the opera style now known as Bel Canto, which is Italian for beautiful singing. Originally this style of music was all about placing an emphasis on virtuosity and beauty of tone. In present use the term may also refer to singing methods dating from the late seventeenth and early eighteenth centuries, particularly the early Romantic period.

The term ‘Romantic’ did not come into common use until 1880, some years after Donizetti’s death when it was more than likely being used as a counter reaction to the drama of the all new pervasive dramatic Wagnerian vocal style. Composers like Wagner knew true art in any era must find its own mode of expression. Donizetti, on the other hand. reconciled his innate Italian style with that of a respect for French grand opera, without abandoning his own countries musical heritage.

iMusici is celebrating its diamond jubilee by touring around the world to celebrate. They are visiting many cities in Europe, the Baltic, China, Singapore, Taiwan, Korea, Japan, South America, USA, Canada, Russia, New Zealand and Australia. This is a rich presentation of individuals, their capabilities, their habitat and indeed their credentials – all of which will enhance our love for fine music making, give a little boost to our collective historical understanding and, raise our cultural awareness. ‘In every art form good models give birth to ideas by exciting the imagination‘*. Today in western tradition architecture, literature and philosophy are integral to the intellectual and artistic life of every society in every age, with its spirit expressed through the richness of its music.

The beautiful sound of music produced by Italy’s unique ensemble iMusici will be sure to revitalize and nurture the inner well-being of many Australians. You will just have to be there.

NB: All images, brochure download, video and historical information provided and used with the kind permission of iMusici da Roma

Australians in summer embrace French chic, style and culture at a French Market in Adelaide and So Frenchy So Chic festivals in Adelaide, Melbourne and Sydney