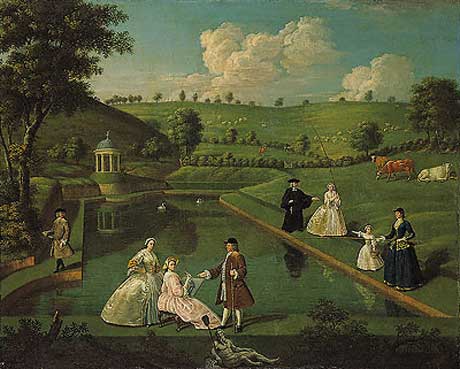 The irregularity of English gardens in their quest for an ideal landscape gradually evolved throughout the eighteenth and early nineteenth in England and Europe into twisting paths creeping around natural looking lakes, with banks and glades meant to inspire both the poet or painter.

Trees were planted, a temple column or pavilion added, and European and Oriental styles mixed were with equanimity. With the freedom to introduce sinuous forms in ground plans and decoration came the freedom to experiment with new ideas.

Since an intrinsic part of 18th century life had been imagination and wit, it is not surprising gardens were handsomely, exotically and amusingly embellished.

Eighteenth century wit Horace Walpole had commented ‘We have discovered the point of perfection. 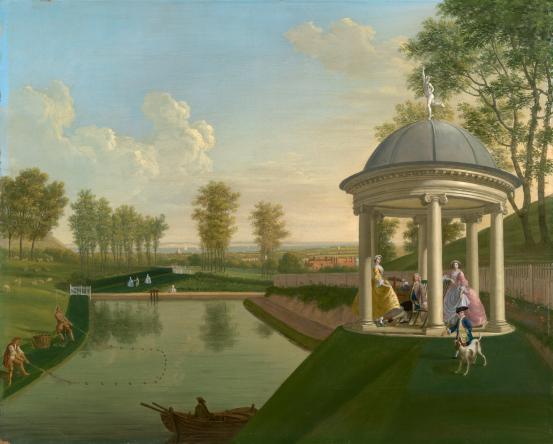 The Brockman family in their temple at Beachborough Manor, courtesy National Gallery Victoria

We have given the true model of gardening to the world; let the other countries mimic or corrupt our taste; but let it reign here on its verdant throne, original by its elegant simplicity, and proud of no other art than that of softening nature’s harshness’ and copying her graceful touch.

Phillip Southcote (1699-1768) transformed his rural working farm into a landscape where buildings occurred at prescribed intervals and both herbaceous flowers and flowering shrubs were used to decorate the most distant walks and plantations and to edge hedgerows.

He created an original garden around the buildings, similar to that of painting with foreground, middle and background effects.

In the process he created a garden for the ideal ‘cottage orneé’, that comfy cosy cottage in the country you stay in if you want to pretend to be something that, on a day-to-day basis, you are not. Changes in the design of private parks were taking place and with Humphry Repton (1752-1818) in England the eighteenth centuries landscape movement reached its climax, or point of perfection.

Repton was an improver par excellence. ‘Let us begin by defining what a garden is, and what it ought to be’, he wrote in his Theory and Practice of Landscape Gardening (published 1803).

He created a fashion for botanics, stressing the importance of colour effects in composing a landscape, paying great attention to the play of light and shade. Repton beguiled his clients with his sensational red books; his success attributed to an ability to record prettily on paper his views on how a landscape garden should be designed. Born in 1752 at Bury St. Edmonds in East Anglia, as a young man Repton spent five years gardening, while studying botany, entomology and making drawings of ‘natural scenes as well as many country seats in his neighborhood. Humphrey Repton’s design for changing the landscape after … nature improved

Returning to East Anglia from working in Ireland in 1788 it is reported that he decided, apparently in the middle of one night, that he had the qualifications to become a landscape designer and announced it to his friends by letter. His success, we are told, was instant. Capability Brown had died in 1783. His son, Mr. Lancelot Brown MP allowed Repton access to his father’s papers and from that point Repton considered himself Capability Brown’s successor.

His views on gardens were that they should complement the architecture of anything from a grand country house to a simple ‘cottage orneé’.

At Thomas Fish’s cottage orneé at Sidmouth the design that was used was originally proposed by Repton for the gardens of the Prince Regent’s Pavilion at Brighton.

Flowerbeds in the lawn were surrounded by wickerwork, painted turquoise to match the trim of the house. Repton left a legacy of some four hundred estates bearing the signature of his ideas, endorsing Capability Brown’s view that a country seat should reflect its owner’s wealth, while criticizing him for the siting of an artificial lake on the top of a hill, or the lack of formality in the house’s immediate setting.

Prim gravel walks, through which we winding go
In endless serpentines that nothing show

Humphrey Repton’s ideas corresponded with a newfound appreciation of rugged natural landscapes such as those found still found at that time in Wales and the Lake District. He trod neither the middle path liking ‘neither the bare and the bald’ nor the ‘shaggy and harsh featured spirit’. 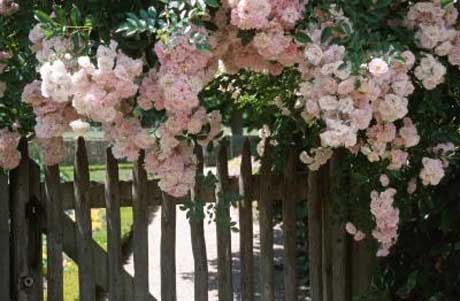 Repton brought back flowers into parts of the garden. He planted ‘rosary’s’ with garlanded roses on chains floating over lower growing roses and became the most influential of England’s landscape gardeners.

He said a garden ‘… ought to be, cultivated and enriched by art, with such products as are not natural to this country, and consequently, it must be artificial in its treatment, and may, without impropriety be so in its appearance.

Public parks did not have the focus of a mansion, but were gated, fenced and guarded by lodges. Their vastness became a refuge from the outside world and its realities.

This is the period where the impetus of the gardening evolution switched from the private to the public domain.

From being the prerogative of the nobility, parks and gardens became pastimes of pleasure for the people. Londoners gained two public pleasure gardens to choose from, Ranelagh and Vauxhall. A great deal of money was spent on their many and varied attractions. These included supper booths in the Gothick or Chinese taste, a Turkish tent, a bandstand with an organ, walled walks hung with paintings all lit by a myriad of lights

Folk songs or, the much loved music of eighteenth century German born London based composer Georg Friderich Handel (1685-1759), drifted ethereally across the gardens in the moonlight and still night air, adding to their special ambiance.

According to tradition a small porcelain bottle preserved in the Treasury of St Mark’s Cathedral at Venice is one of the pieces of precious oriental porcelain brought back from Cathay by Marco Polo. Venice was the major centre for the manufacture of glass and maiolica in the fifteenth century in…