Currently approaching the 150th anniversary of its founding in 2020, with a new exhibition The Metropolitan Museum of Art will provide an opportunity to approach the evolution of art history for the new age by studying and celebrating works from the core aspect of the Museum’s storied collection.

Rembrandt van Rijn is the painter who for centuries has dominated our perceptions of the Golden Age of Dutch painting. He will, with his darkly realised portrait of ancient Greek philosopher and scholar Aristotle with a Bust of Homer (1653), pave the way and introduce In Praise of Painting – Dutch Masterpieces at The Met Fifth Avenue, New York, on show October 16, 2018 – October 4, 2020. 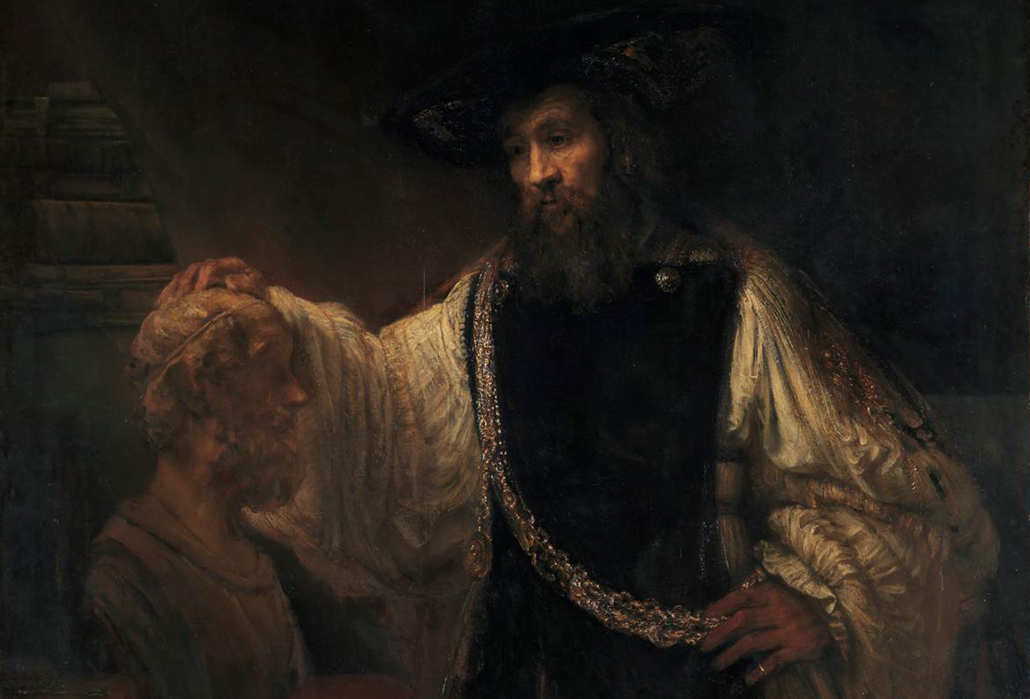 One of the institution’s most prized possessions, the picture was painted by Rembrandt in 1653, commissioned by Sicilian nobleman Don Antonio Ruffo (1610-178), a serious art collector of his day. He also ordered a companion for it of Aristotle’s most famous pupil, Alexander the Great of 1661 (now lost).

Rembrandt virtually reinvented the media of portraiture, etchings and ink and wash drawings, bringing them to an original technical mastery, a sense of drama created by a subtle use of chiaroscuro and his own overwhelming sense of humanity. His self-portraits are among the first psychological studies in the history of art. Born in Leiden, the son of a prosperous miller, Rembrandt Harmensz Rijn (1606-1669) became greatest northern European painter of his age; commonly regarded as one of the greatest artists of all time.

He trained in Amsterdam, returning to Leiden where he quickly achieved a high reputation as a portrait painter. He is only one of the many who fought to keep his head above water by earning money on the side. ‘… An analysis of the subject in an article of 1969 by Julius Held, which is still widely recognised, states Rembrandt’s Aristotle is comparing “two sets of values”.

On the one hand, everything he admired in Homer—gravity, humility, “unequalled diction and thought“—and, on the other, wealth and worldly honour, as embodied by the gold chain and medallion bearing an image of Aristotle’s royal pupil, Alexander the Great’. 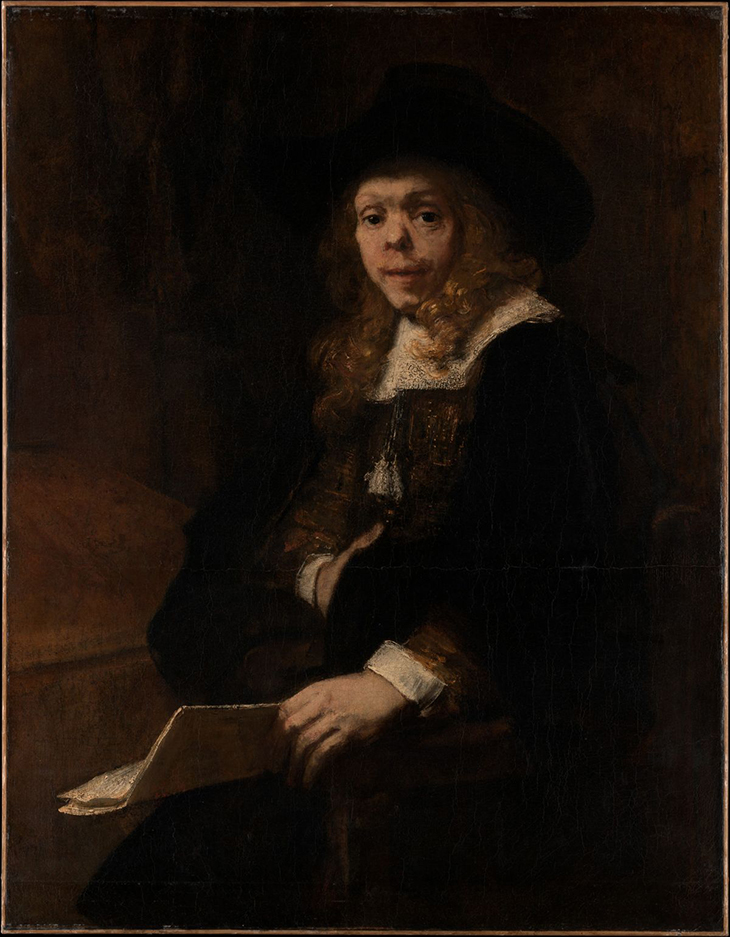 ‘The title of the exhibition at The Met Fifth Avenue is from one of the period’s major works about art theory, Philips Angel’s The Praise of Painting (1642) a pioneering tribute to painting’s ability to imitate nature and achieve realistic effects’.

A portrait expressed the unfailing self – assurance of merchants, doctors, preachers and scholars, while revealing how fashionable ideas caught on quickly among the ‘top people’.

As great pictures emerged, they evoked enthusiastic approval from art lovers in every part of Europe, with Antwerp becoming a hub in Europe.

Merchants set out to sell Dutch artist’s works in markets and fairs all over Europe and the success of Dutch artists during the seventeenth century is contemporary with the expansion of the corporate system. 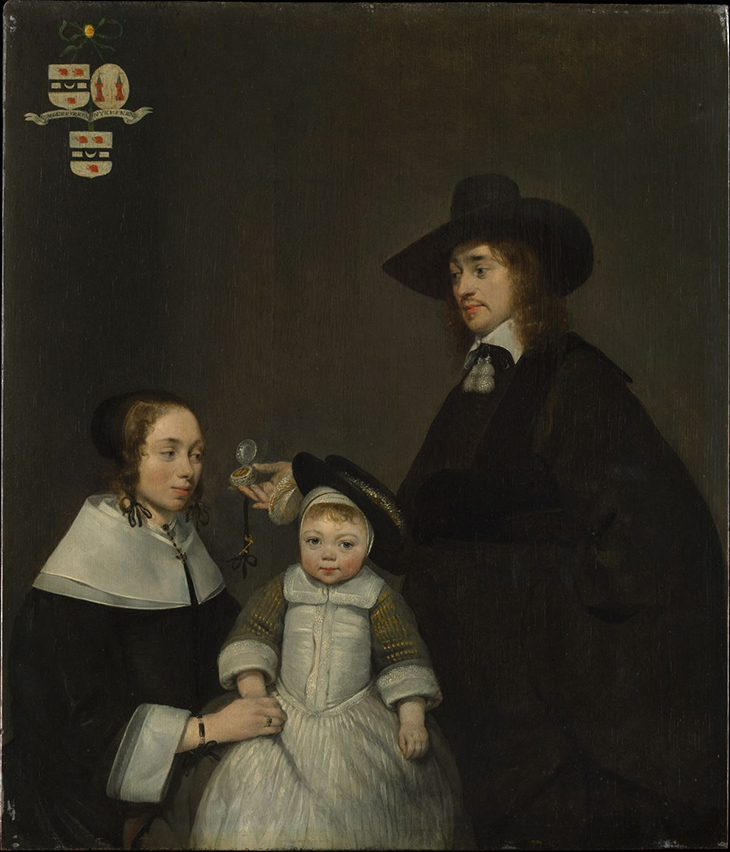 Family life was slowly gaining in importance, as attitudes toward children among the upper echelon of society changed.

During the seventeenth century, the cities in Europe were undergoing substantial urban renewal setting a pattern for future living and by 1620 most countries seem to have understood the essential principles of civilized life and applied them as best they could. 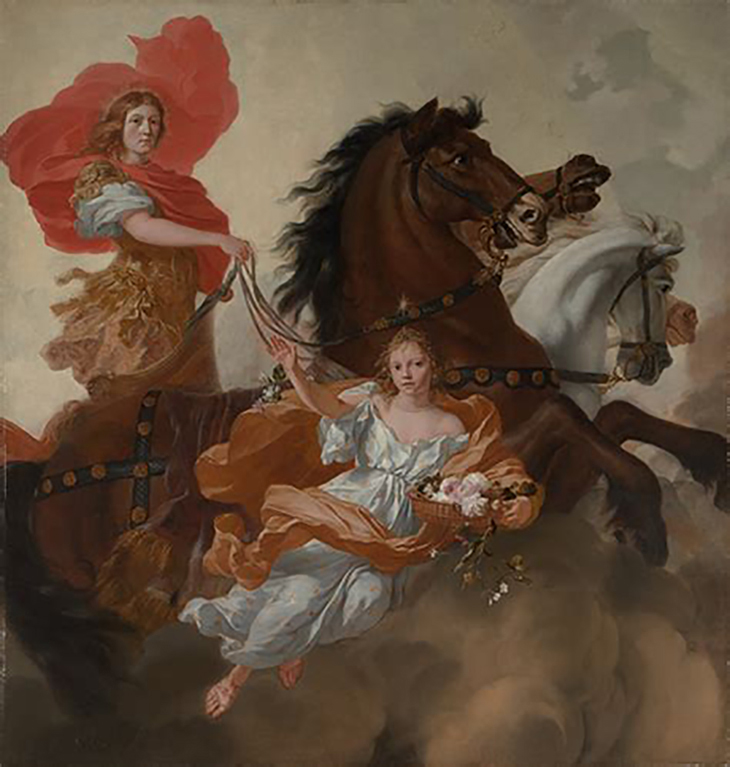 Merchants and art lovers all over The Netherlands were busy filling their houses with paintings of the first rank, just as other connoisseurs and collectors were doing at the same time in Venice, Madrid and Paris.

At the beginning of the century those in the north were still clinging to Calvinist principles of puritanical restraint as an outward sign of their moral superiority.

The adoption of foreign habits was seen as a road to ruin, so accordingly an image of sobriety and simplicity became a guarantor of national independence and success. In the south architects were busy ornamenting buildings with classical features, as the building of private residences also became an important activity. The Mauritshuis, built for Prince Johna Maurits van Nassau at the Hague in 1633, was a game changer as Jacob van Campen (1585-1657) architect, painter, landowner and wealthy bachelor introduced ideas of design in architecture into Holland, inspired by the works of Venetian architect Andrea Palladio (1508-1580).

The wealth of the North was significant as many sought a refuge from Spanish dominance and cruelty in the south, just prior to the signing of the Treaty of Munster in 1648. This created unity in a country so long divided.

The exhibition In Praise of Painting: Dutch Masterpieces will present in nine themes, offering a great deal for today’s society to contemplate as they discover what was a very heady time for artists of a so-called Golden Age of painting. 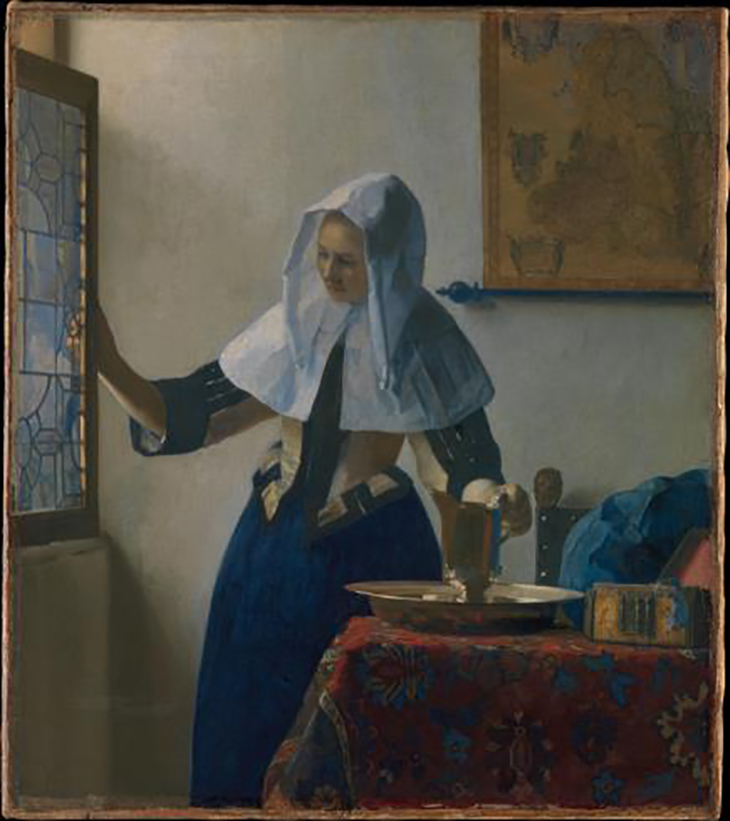 Faces of a New Nation, will be all about identity and status. The Dutch of this time were a people whose wealthy merchants provided a climate that allowed the bourgeoisie to benefit and dictate fashion, their royal rulers respecting their views.

They were proud, self-assured conservative and their dress and furnishings costly but sober, a community of solid, commonplace people, prepared to support a society in which corporate effort for the public good was rewarded with a booming economy.

Questions of Faith, will examine religious devotion and how its impact on society was being held up for scrutiny by intellectuals and scholars. For many the character and wishes of God remained clearly visible in the magnitude of nature and the Calvinist ethic dictated it was a man’s duty to employ the products of nature provided by the creator. 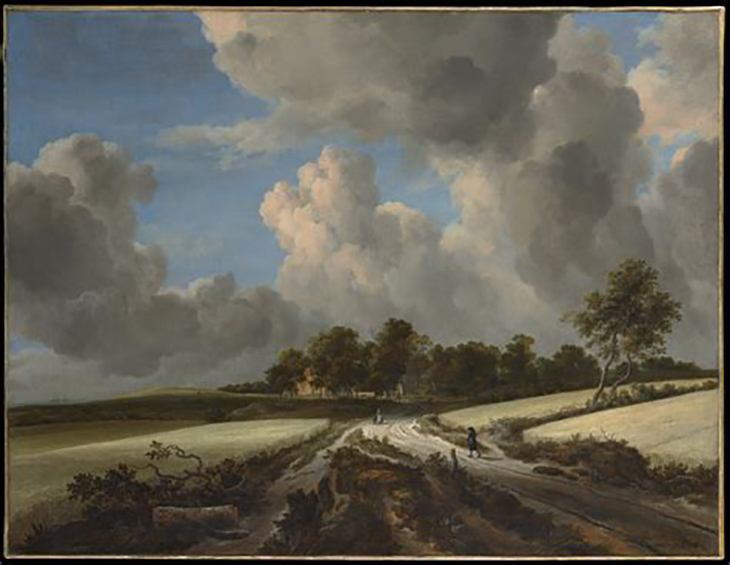 Staking a Claim is all about the landscape, as seen in paintings like Jacob van Ruisdael’s splendid Wheat Fields (ca.1670.

Paintings at this time served two functions, one that was decorative and one meant to issue a moral lesson by using symbolism to reinforce ideas put forward in the literature of the period.

Modern scientific methods of perfecting the examination of the physical world led to inventions – from telescopes to microscopes – improving and enhancing sight. They also proved invaluable for the painter, who could examine botanical specimens in minute detail to render nature as close to accurately as could be imagined.

Masters, Pupils and Rivals will be full of interest; the works of Rembrandt’s first student Gerrit Dou, a feature. 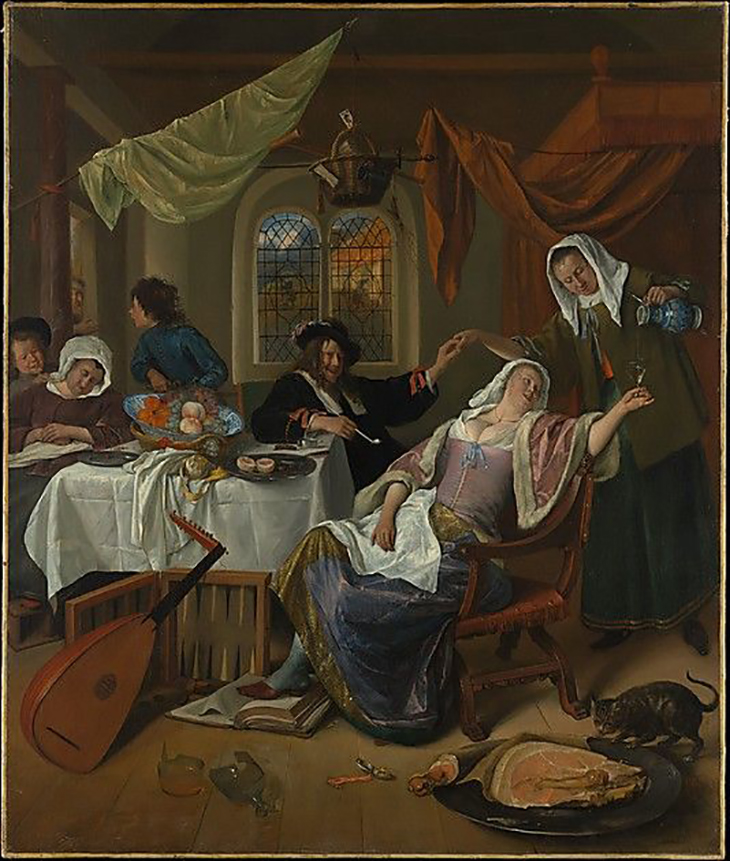 The Comic Painting Gallery will include works by painter Franz Hals, who through his deft handling of brush and paint, gave us an impression he ‘caught’ his sitter at a characteristic moment, seizing the day. 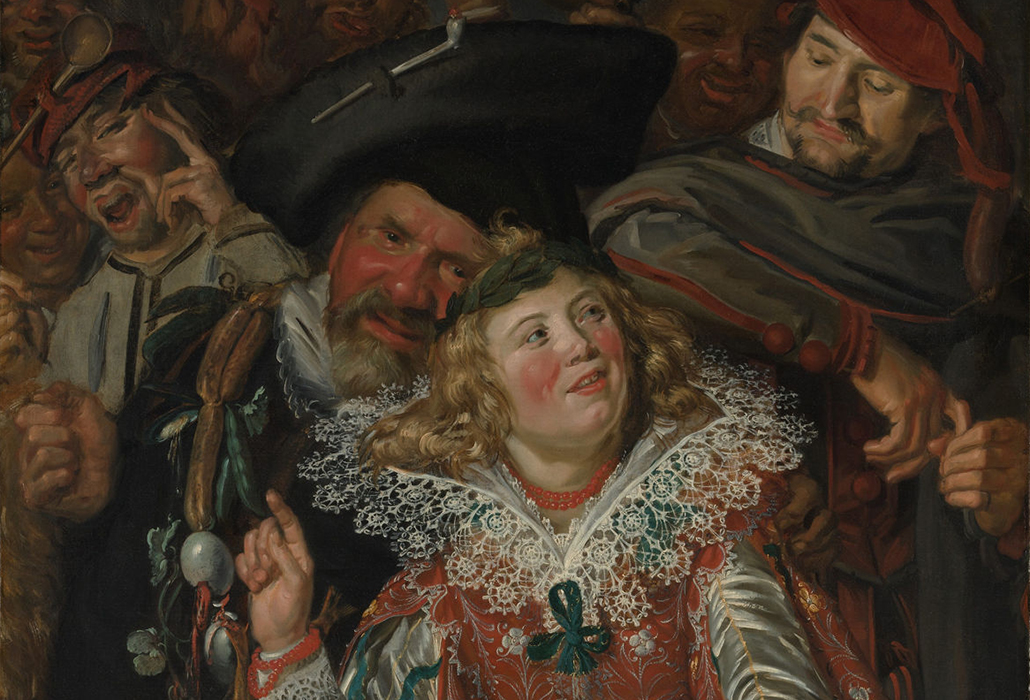 Hals was popular at a time when Dutch collectors revelled in scenes of merriment and misbehaviour, especially among the lower classes.

His models never looked tired or stale and his works offer a casual glimpse of the sitter, one that could never have been achieved without a deliberately calculated effect.

Contested Bodies will look at all aspects of the human body, including Rembrandt’s realistic female figures in Bellona (1633) and The Toilet of Bathsheba (1643), to be contrasted with the contorted, supernaturally muscular bodies in Abraham Bloemart’s Moses Striking the Rock (1596). 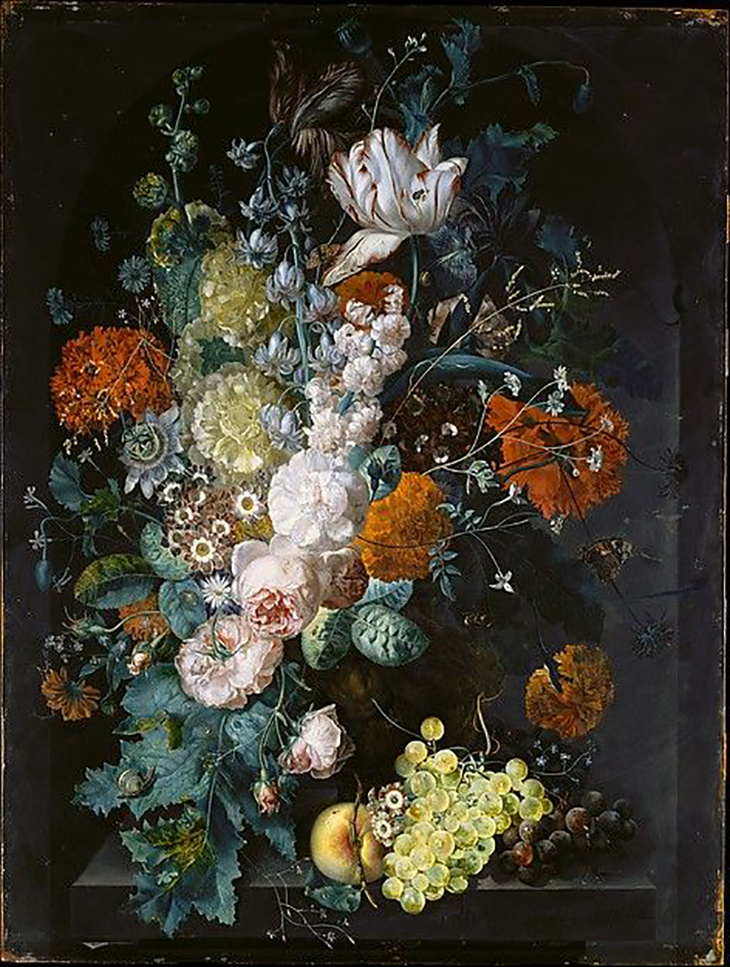 The Eloquent Things will showcase Margareta Haverman’s Vase of Flowers (1716), which has been newly conserved. It will be the only painting by an early modern Dutch woman in the Museum’s collection.

The word still life was not used until the mid-seventeenth century, and we come across it first in Dutch inventories at that time.

Still life painting immortalized the beauty of the flowers, so they could be admired in those periods of the year when they were not in bloom, so they were depicted as realistically as possible. 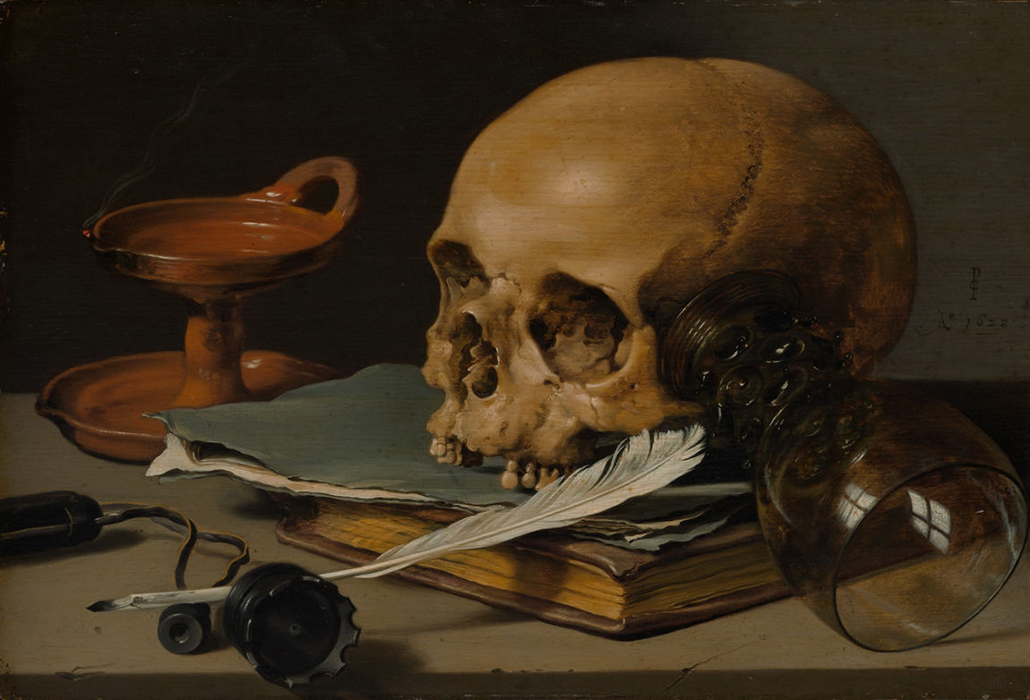 Also on display will be Pieter Claesz’s exceptional powers of observation through his Still Life with a Skull and a Writing Quill (1628), a richly symbolic work about the brevity of life.

Tradition says he was given 1,000 guilders for one of his depictions of flowers, an extraordinary price at the time a portrait was worth some 60 guilders on the Dutch art market. This is indicative of how much skill was considered to have gone into the rendering of this new popular genre of painting. 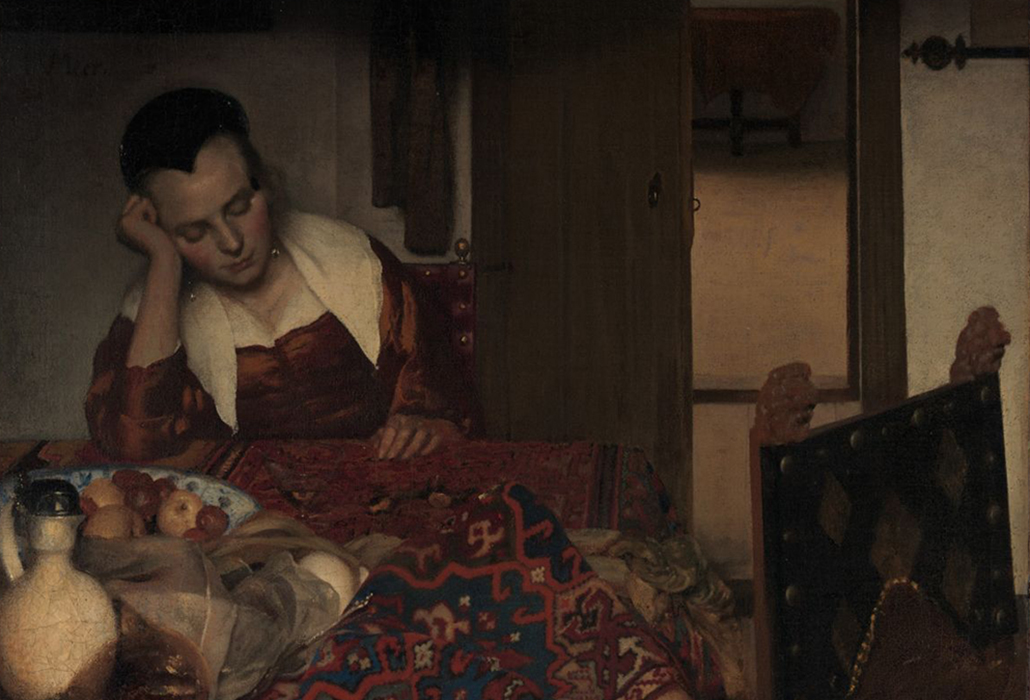 Lives and Women showcases everyday activities; keeping house, dressing the children, through works such as Gerard ter Borch’s a Young Woman at Her Toilet with a Maid (ca. 1650–51), and Vermeer’s A Maid Asleep (ca. 1656–57).

Finally, Behind Closed Doors will allow a view of amorous pursuits and civilized leisure as depicted in “high-life genre paintings.”

Gerard ter Borch and Pieter de Hooch pioneered a style, which reached its apogee in the Young Woman with a Water Pitcher (ca. 1662) by Johannes Vermeer, the first work by the artist to enter an American museum’s collection; 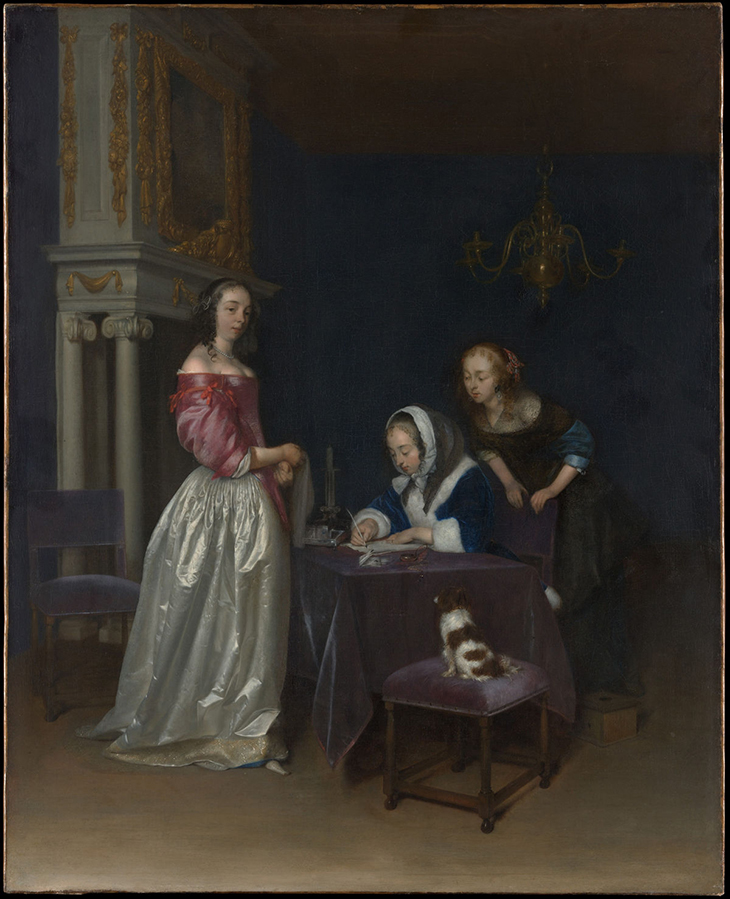 Then there is Curiosity (ca. 1660–62), revealing three women in a luxuriously appointed interior, alongside De Hooch’s Leisure Time in an Elegant Setting (ca. 1663–65).

The success of Dutch artists during the seventeenth century is contemporary with the expansion of the corporate system, especially when combined with the increased knowledge and the emergence of two new professions; nurseryman and floriculturist. 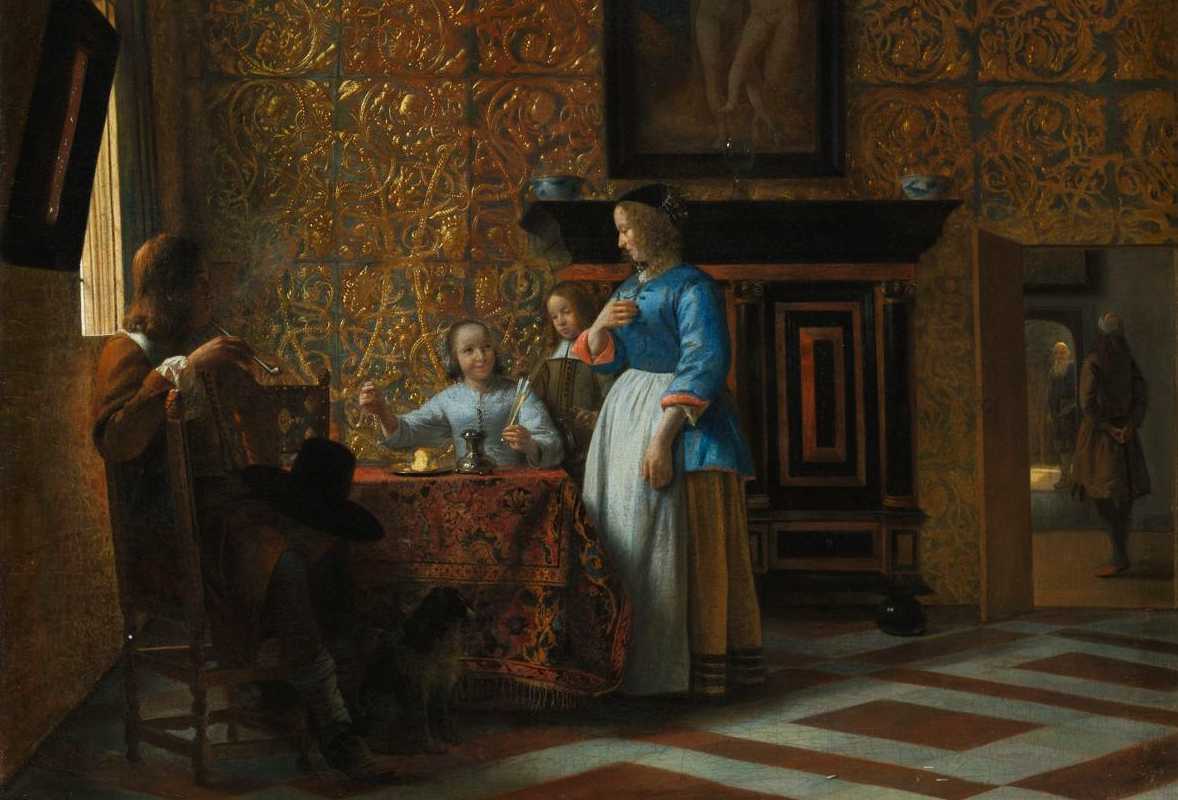 Dedicated to experimenting with new methods of cultivation and hybridization, ultimately led to a greater sensibility, as they changed the face of civilised living, setting in motion forces that would have important cultural and economic repercussions for years to come. 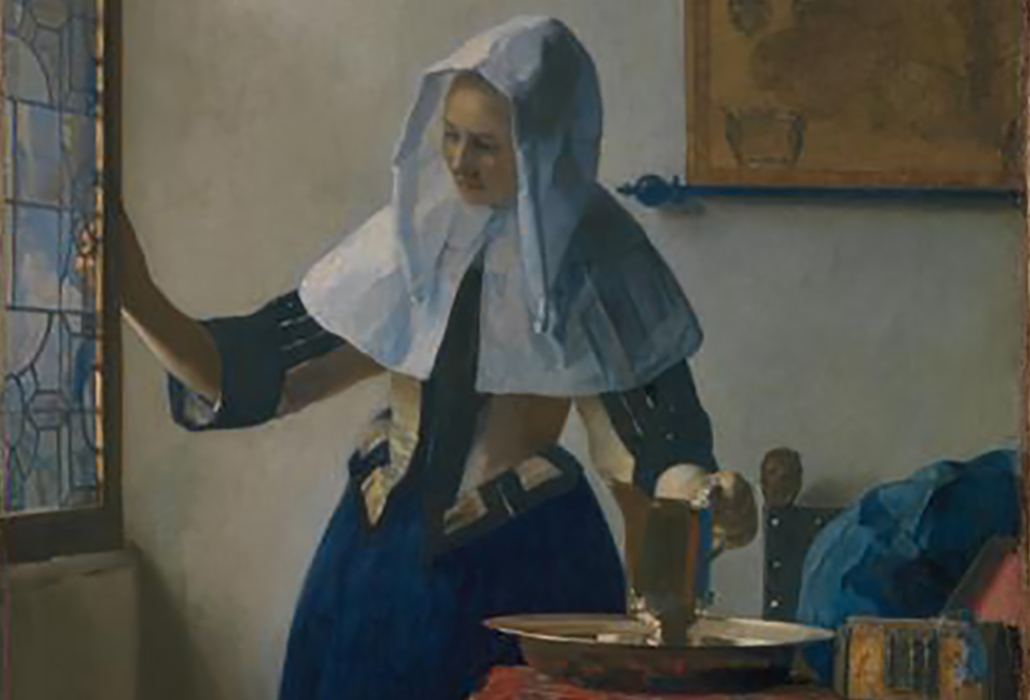 In Praise of Painting – Dutch Masterpieces

Take cooking classes at The Agrarian Kitchen in Tasmania with Rodney Gunn, where you can experience the pleasure of living and eating from paddock to plate