Of all the people in history many would enjoy to take tea with it’s the Romantic era English author Jane Austen (1775 – 1817). What lively conversation would likely to be had. From England comes the simply splendid news that the Bodleian Libraries at the University of Oxford has acquired at a Sotheby’s English Literature, History, Children’s Books & Illustrations auction, the last original manuscript of the now famous English novelist, which has been in private hands. Richard Ovenden, Deputy Librarian, Bodleian Libraries said: ‘The Bodleian Libraries are delighted to have succeeded in their bid to save Jane Austen’s draft manuscript of The Watsons for the nation. The manuscript is such a valuable part of our literary heritage and we are glad it will stay now in Britain’. The Watsons is the very genesis of fiction from one of the Britain’s greatest and best-loved writers. Jane Austen‘s novels have become classics in their own right and today they allow us to share the memory of the robust society in which she lived and its privileges of rank. 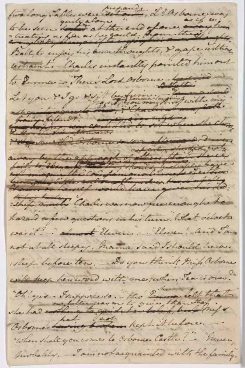 No other library in the world has a wider human reach than the Bodleian because of the hundreds and hundreds of unbroken years of collecting and receiving great gifts. Its many treasures movingly demonstrate the hopes, aspirations and speculations of mankind. The manuscript of The Watsons is one of the earliest examples of an English novel to survive in its formative state. It will be made available to the general public in the U.K. when The Watsons will become the star item in their forthcoming Autumn exhibition “Treasures of the Bodleian”.

The hammer price for the rare document was 993,250 GBP supplied by Britain’s National Heritage Memorial Fund (NHMF), which is known as the ‘fund of last resort’. In the face of intense, worldwide competition it was able to help the University secure this exceptional work for display and for expanding scholarship. The amazing price received for the unfinished manuscript was a far cry from the day when Jane Austen sold her first novel Northanger Abbey for 10 GBP in 1803 to London publishers Richard Crosby and Co., who did not publish it in her lifetime because of its ‘painful realism’.  Today Jane Austen’s novels occupy a unique position at the crossroads between the world of academia and the world of popular culture. From the vanity of Rev. Collins to the pride of the very dashing Mr Darcy Jane Austen’s cast of characters continue to captivate us all. Watercolour of Jane Austen by her niece Cassandra

Her novels survive and remain in contemporary culture because their stories are timeless and their characters greatly flawed. They seem to all intents and purposes, just like the rest of us. And, there is a comfort in that for many. They make us think of the fun to be had at country dances, of enjoying romantic carriage rides, when playing charades and having long walks over hills and dales, around lakes and up and down local laneways. They provide us with delightful and stylish images of that leisurely world we all want to belong to, the ideal one we are all seeking.

The Bodleian Libraries are one of the great centres for studying English literature. Having collected material assiduously since 1611, when an agreement with the Stationers’ Company ensured an ever-increasing flow of literary material onto its shelves. They have some extraordinary works available. Other major British literary archives held at Oxford are that of Romantic poet Percy Bysshe Shelley, the playwright Alan Bennett (History Boys), the novelist Kenneth Grahame (Wind in the Willows) and the more recently acquired classic spymaster John le Carre among others. A bequest of 250 + manuscripts to the city of Oxford by Duke Humfrey (1390 – 1447), youngest brother of Henry V made it possible to found the library in 1602.

On display alongside The Watson’s manuscript at the Bodleian Libraries will be some of the Bodleian’s rare, most important and most evocative items. From ancient papyri through medieval oriental manuscripts to twentieth-century printed books and ephemera. They will be arranged into broad themes: the classical heritage; mapping the world; the sacred word; the animal and plant kingdoms; works of the imagination; the sciences of observation and calculation; and historical moments in time.

The University of Oxford also recently launched a resource The Jane Austen’s Fiction Manuscripts Digital Edition which reunites in a virtual space all of Jane Austen’s handwritten manuscripts for the first time since 1845, when her niece Cassandra dispersed the collection. 1803 was the year Jane and her family went to live at Bath. It was the age of pleasure and 1804 is the year when scholars seem to have pinpointed she started writing The Watson’s. No one really knows when or, why she did not ever complete it. All in all there are five chapters of the story, which is less than 18,000 words long. The Watsons manuscript as it was purchased is extensively revised and corrected throughout, with crossings out and interlinear additions. It is a testimony of Jane Austen’s efforts to give shape to her earliest ideas as they poured out onto paper and, as she reviews, revises, deletes and underscores.

The Austen family lived in Sydney Place at Bath just over the very attractive Pulteney Bridge designed by neoclassical London based Scottish born architect Robert Adam and right next door to Laura Place where Anne Elliot’s snobbish cousins, the Dalrymple’s lived in ‘Persuasion’. Jane disliked Bath and thought it bad for her health but she did feature it in two of her most charming novels – ‘Northanger Abbey’ and ‘Persuasion’. The Assembly Rooms built by John Wood the Younger (1768-71) are still there.

They are where her heroine Catherine Morland from ‘Northanger Abbey’ sat disconsolately waiting for a partner until the delightful Henry Tilney appeared. Bombed during the Second World War the rooms have been sensitively restored to their original appearance. One can still walk on the hills nearby to Bath where Henry and his sister, Eleanor, instructed Catherine in the delights of looking out over the landscape.

Jane Austen’s last unfinished work was first published in 1871, as part of her nephew James Edward Austen-Leigh’s Memoir. Since then a number of people have tried to finish it. But despite good intentions they are not Jane. James Edward Austen Leigh’s Memoir was the landmark publication that finally introduced the world at large to the works of his aunt Jane Austen, generating interest in her novels. Apparently it was only the literary elite who had read her novels up until that point. 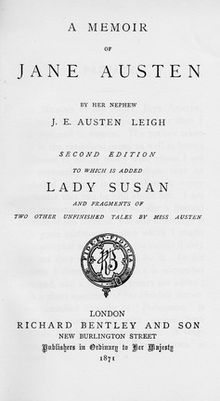 His Memoir was based on he and his siblings memories when they were only children and those who had known her. It remained the primary biographical work on, or about his now famous aunt and author for over half a century. Austen-Leigh described his “Dear Aunt Jane” as if she was uninterested in fame and only wrote in her spare time. 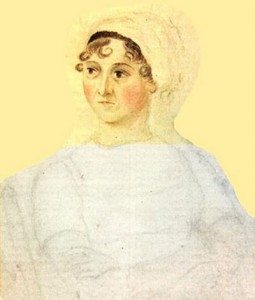 However the manuscripts appended to the second edition suggest Jane Austen was intensely interested in revising her manuscripts and perhaps less content than her nephew described her. So much of Jane Austen’s personal story was bound up in her letters, which were confined to the fire by her sister Cassandra and reduced to ashes. So Jane Austen will always remain an enigma to history and her fans in many respects. Speculation is always rife, but that is what it is, just vivid imaginations filling in the blanks.

Austen Leigh provided the title The Watsons for the unfinished work by Jane Austen, which recently netted its previous owner nearly a million pounds. Before the actual auction, Sotheby’s had estimated the value of Jane Austen’s Manuscript at £200,000-£300,000. The owner must be more pleased with the result than Mrs. Bennett in Pride and Prejudice on the day in which she got rid of her two most deserving daughters.